The best news of the day?


Anderson Cooper will be looking for a new New Year’s Eve co-host, after CNN decided Wednesday to sever its relationship with the comic. The sacking comes one day after Griffin thought posting a photo and video of her holding up what was intended to look like the severed head of President Donald Trump was a good career move. She later apologized, after seeing the blow-back from both the right and left (including Cooper) – alas, too late:

The line has been crossed way too much.

It's time that enough was enough.

She can do a comedy show on cable if someone wants her.

But she shouldn't be on CNN at all.

She's crossed a line and it's time for her to pursue other avenues.

I'm not calling for her to be stoned.

She might get a sitcom offer out of it.

And people may watch.

They watched her in SUDDENLY SUSAN and that show was hideous except for the guy who killed himself.

But she shouldn't be on CNN again.

That photo and video crossed a line and it's not a line CNN should allow to be crossed.

Again, don't want to stone her.

Won't spend my days worrying over what she did.

But CNN needed to take a stand.

Wednesday, May 31, 2017.  Chaos and violence continues as so much of the dead are rendered invisible.


Recent violence in Iraq has been largely ignored by the western press.  One event this week, the bombing of an ice cream parlor in Baghdad, has gotten some attention. 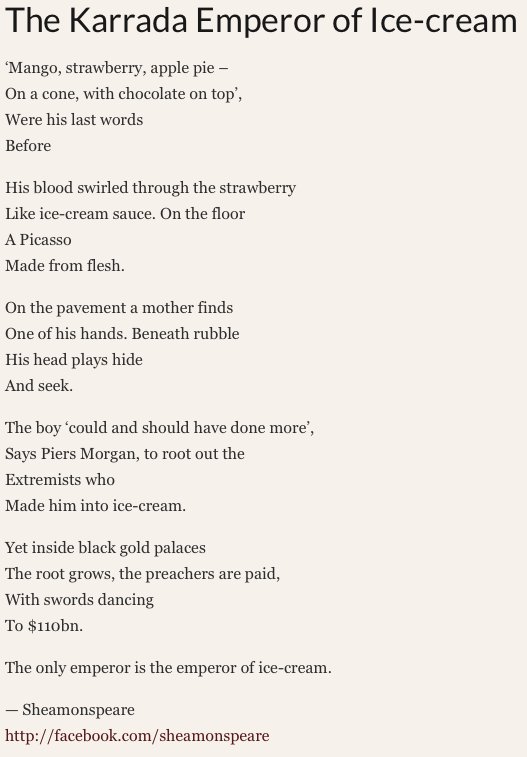 
Read over it and see if you can see the major flaw.


An Australian schoolgirl was one of more than a dozen people killed when a massive car bomb tore through a popular ice-cream parlour in the Iraqi capital Baghdad this week.
Zynab Al Harbiya, 12, was with her family at the Al-Faqma ice-cream parlour in Baghdad's central Karrada district in the early hours of Tuesday, local time, when a jihadist blew up an explosive-laden car parked outside.

Foreign Minister Julie Bishop this morning confirmed the year seven student was killed in a suicide bombing that targeted an ice cream parlour in the Iraqi capital.
Accompanied by family members, the young girl had just enjoyed an ice cream on Monday night, breaking the daily fast undertaken during the holy month of Ramadan when a car bomb was detonated outside the popular eatery.
“She broke her fast and she just wanted to go and get some ice-cream from the parlour,” Zynab’s cousin Layla Al-Saabary said through tears on The Project.


The violence in Iraq is repeatedly ignored.

The victims of the violence are immediately forgotten.

There's not one name in it.

Don't give him credit for 'time rush.'

There was no time rush.

We're calling it a Tuesday attack due to the time change.

But this is the same attack that we first covered in "ISIS attacks Baghdad" which posted here Monday at 8:14 PST.


And how do you not get the name of one person killed even if the blast was four hours ago?


At THIRD, on Monday night, we offered "Editorial: Do the deaths matter?"


We included two Tweets in the editorial:

Sarah Abdallah‏ @sahouraxo  4h4 hours ago
Iraq, just like Syria, has endured the most death & ruin at ISIS's hands. But sadly, the global outrage and MSM coverage is slim to none.


Replying to @Hayder_alKhoei
How many monuments around the world will be lit up in Iraq's colours to show solidarity with tonight's victims? How many minutes airtime?

Maybe the world would take notice if the western press did?


Taking notice means you include the dead.


Including the dead does not mean you give numbers, it means you give details.


You have to wonder how the impersonal 'reports' of this violence could impact other violence?


The reports indicate -- by failing to cover the victims -- that lives don't matter.

How does that impact readers in Iraq?


Because a westerner was one of the victims, we have a name.

We have no names of the Iraqis, though.


And we're treating this as normal.

It's not even reporting.


They need to dig a little deeper.  And the video is Ella Eyre performing "Deeper."

Secretary of Defense James Mattis has again declared, during a lengthy interview with CBS News on Sunday, that the US-led campaign against the Islamic State of Iraq and Syria (ISIS) has shifted from “attrition tactics” to “annihilation tactics.”
Mattis implied these “tactics” included the extra-judicial execution of wounded or captured people suspected of being ISIS militants—a flagrant war crime under international law. The former marine general, who directed the murderous US military assaults against Iraqi insurgents in the city of Fallujah in 2004, told CBS: “Our intention is that the foreign fighters do not survive to return home to North Africa, to Europe, to America, to Asia, to Africa. We’re not going to allow them to do so.”
The current focus of the US-directed war on ISIS is the northern Iraqi city of Mosul, which once had a population of over 1.6 million. After months of relentless air strikes and bloody street-to-street fighting, the Iraqi government claims that the remaining ISIS fighters are trapped in the compact and densely-populated suburbs of Mosul’s west, known as the “Old City.” What is left of the ISIS leadership is believed to be holed up in the 900-year old Great Mosque of al-Nuri, where ISIS leader Abu Bakr al-Baghdadi proclaimed a “caliphate” three years ago.
In October 2016, a massive force of Iraqi troops, Kurdish peshmerga militias and Shiite militias began the offensive to retake Mosul. The assault has been supported from the air by jet fighter-bombers and helicopter gunships provided by the US, Australia, Britain, Canada and France. Iraqi ground forces are being accompanied into battle by special forces personnel from the same countries. Iraqi military commanders have boasted they will complete the recapture of Mosul over the coming two weeks.
Earlier this month, Iraqi commanders claimed that some 16,000 ISIS fighters had been killed in the Mosul area since October. When the offensive began, the number of ISIS fighters in the city was generally estimated, by both US and Iraqi government sources, at around 5,000, and at the most, 10,000.
How many of the purported ISIS dead were in fact non-combatants may never be known. What is known, however, is that all males from Mosul older than 14 have been interrogated by government forces as potential ISIS fighters. An unknown number have not survived the process.
In now widely published images, taken between October and December 2016, photographer Ali Arkady captured, in photo and film, some of the horrific torture inflicted during interrogations. According to a March report by Human Rights Watch, some 1,269 people, detained during the earlier stages of the fighting, were being held in “horrendous” and “degrading” conditions in makeshift prison camps. Some 700 others had been transferred to prisons in Baghdad.