May I have the envelope please?

She got another best actress in a comedy Emmy nomination today.


You might not realize that because no one watches the show.

But this is her sixth nomination for VEEP.

Now we're supposed to watch the same actress win for the sixth year in the row?

No one deserves five Emmys in a row.


Let's start with the world of misinformation.  What's wrong with this Tweet?

Hector Morenco‏ @hectormorenco  15h15 hours ago
This is what victory in Iraq and nation building looks like. Well done Dick Cheney and the Neocon establishment. John McCain is proud.

But for me, the most striking aspect of this Tweet about Iraq showing the destruction of Iraq?


The photo is Syria.

A Kurdish marksman looks over a destroyed area of Kobani on Friday, January 30, after the city has been liberated from the ISIS militant group.  The Syrian city also known as Ayn al-Arab, had been under assault by ISIS since mid-September.

If you read Arabic, you can find it on this CNN page.


And then there's this one: 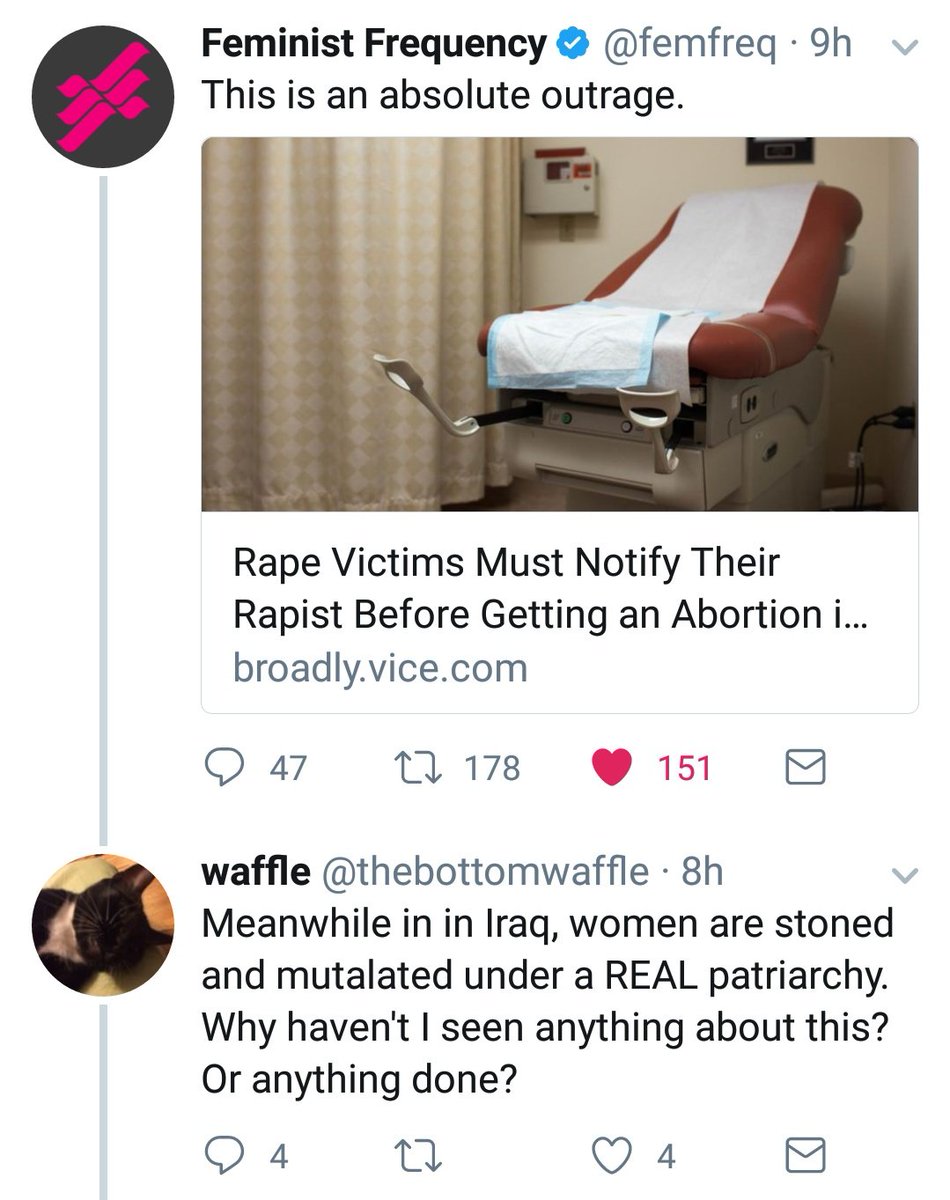 
There are multiples here again.

FEMINIST FREQUENCY -- a  pop culture site -- Tweets the above.

Don't know anything about WAFFLE.

But the response is not inaccurate.

Abortion is moving beyond their pop culture scope.

But when you move beyond it, you better be prepared for the things you ignore to be raised.

FEMINIST FREQUENCY's Tweet does not exist in a vacuum..

And if you know feminists from the Middle East or women activists from the ME, you know this is not a minor issue.  It's given feminism a very bad name.

What WAFFLE Tweets about?

These are post-invasion conditions.

So western feminists have no excuse for ignoring these conditions.  (FEMINIST FREQUENCY is Canadian-American.)

Yes, it is outrageous that rape victims would have to notify their rapists before getting an abortion.

What's more outrageous on that story is the selective outrage by VICE and by FEMINIST FREQUENCY.

Forget rape for one minute, the law requires a woman getting an abortion to notify the sperm injector.

Quit whining about rape -- and, yes, it is whining.

The larger part of that law -- any notification -- is what's objectionable.

No woman has to explain -- including women who do not want to use the term rape but were raped.

She certainly shouldn't have to get permission.

Yes, the rape aspect is appalling.

But stop ceding our rights by running to the inflammatory when the whole thing is objectionable on its face.

The next thing that's wrong?

And if you're going to stop Tweeting about gaming and TV for abortion you better eat your vegetables and take accountability for what the west did to Iraq.

It is a feminist issue.

But so many ignored it.

In fact, that story was illuminating for women around the world about just how myopic the navel gazing feminists of the west could be.

(I am a feminist of the west.)


Abeer Qassim Hamza al-Janabi is the 14-year-old Iraqi girl who was gang-raped and murdered March 12, 2006.

The way that tragedy and War Crime was ignored by western feminists was appalling.

And it was ignored.

We covered it here, Jane Fonda covered it in a speech, but if you look at the bulk of women who identify as feminists in North America, you will see very little content produced.

A 14-year-old girl was observed by US troops.  They plotted how to break into her home and to gang rape her and then to pin the violence on 'militants.'  They gang-raped her while her parents and her younger sister were shot dead in the next room.

They almost got away with it.

So that Tweet by WAFFLE doesn't exist in a vaccum.

As men, we say MRAs are the worst. They spread misinformation about feminism, while hurting men's real issues. And yes, they just flat out hate women.


The men insert themselves into the poster of Rosie the Riveter.

They can't use an iconic image to celebrate women, they have to impose themselves on it.

Which makes the "We can do it" slogan offensive.

Because, apparently, when it was a woman -- Rosie -- it couldn't be done and therefore they had to change the image.

This is beyond offensive.

Again, this is an ongoing, global conversation among feminists.  TakeDownMRAs is not a feminist group.  A group of men who are feminists wouldn't doctor a Rosie image to advance themselves.  And it takes the War Hawk lovers to get offended about Iraq being raised.


Reminds me that Luke Mitchell (HARPER'S) reported in 2007:


I was making that same journey from well to terminal, and yet in all my time in Iraq I would see the oil itself only once. This was in a particularly empty patch of desert, beyond even the lonely cinder-block houses and the rock-throwing kids. We had sped past dry concrete canals and abandoned oil drums and rocket-charred tanks, past mile upon mile of flat dirt and rust, and then we found ourselves driving between a series of mirror-black ponds. These pools crept along both sides of the highway, and through the scratchy ballistic glass of our SUV it was hard to tell at first if the liquid within was oil or water. There were no ripples, though—the pools were thick—and the hot asphalt smell was strong enough that it had become a taste. Sam said the oil came from leaky pipes, that there is no EPA watching over Rumaila. “You have to give the devil his due here,” he said, meaning Iraq. “On a good day, they export 60,000 to 70,000 barrels an hour. If 500 barrels of crude spill on the ground here, what is that? Not more than a half minute of export.”


Photojournalist David Bacon has had many exhibits and written many books, including the highly praised The Right to Stay Home: How US Policy Drives Mexican Migration.

LIVING IN THE SHADOWS is his new book.  We'll note the following: