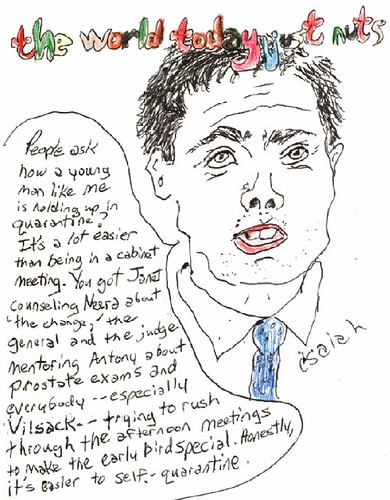 Isaiah's THE WORLD TODAY JUST NUTS "Lazy Dog Joe" is his second comic at THE COMMON ILLS this week.

PRODIGAL SON airs Tuesdays on FOX.  I wasn't that fond of this week's episode.

Bellamy Young's character Jessica tricked Malcolm's father into admitting that Ainsley was a killer.  As he looked at Jessica, Martin realized too late that he'd been tricked.  He called Malcolm to let him know that Jessica knew.

That was the best part of the episode.

It had way too much Ainsley.  I don't like the actress who plays Malcolm's sister.

She's not necessarily a bad actress but she doesn't work with the rest of the cast.  She'd be fine on LEGACIES, for example, or THE ORIGINALS but she's too  -- I don't know.  They're a vibrant, multi-color -- the rest of the cast -- and she's a pastel painting.

I was bored through most of the episode, honestly.  She just doesn't work for me.

Tuesday, February 9, 2021.  The US government's goal of spreading austerity continues, the Pope releases his schedule for his planned visit to Iraq next month and much more.

"Leaving the kids at home is, it’s going to be different," Hanson said.

Hanson says she didn't have children at home during her first deployment 13 years ago.

"For my older two I think they understand as much as they can at this point (about me leaving)," she said. "I don’t think that it’s sunk in to them quite yet emotionally or mentally what that’s going to mean."

Yesterday, she is one of the over 60 members of Minnesota's National Guard who will be deploying to Iraq and Kuwait.  David Schwarz (ST. CLOUD TIMES) notes, "The troops will next travel to Fort Hood, Texas, where they will join 75 soldiers from the Iowa National Guard for two months of training before leaving for their nine-month deployment."

They're deploying to Iraq.  Why?

It's a question that no one is ever pressed on.  The illegal war hits the 18 year mark next month.  Why?

Back in August of 2005, NPR featured Cindy Sheehan in a nonsense segment where the 'interviewer' editorialized repeatedly:

ALEX CHADWICK: [. . .]  Cindy Sheehan. She is the woman who set up a peace vigil outside President Bush's ranch in Crawford, Texas. Her son, Casey, an Army specialist, died in combat in Iraq last year.

In the last month, Cindy Sheehan has become the face of the anti-war movement. She's demanding that the president meet with her, though she did see him in the company of other families last year. In a Washington Post/ABC News poll that's out today, 53 percent of those polled support Ms. Sheehan's demands for this meeting; 42 percent do not. Most also say her protest has not changed their views on Iraq. I spoke with Cindy Sheehan from Crawford yesterday.

What do you think of everything that's happened over this last month? You've become the center of a lot of attention.

Ms. CINDY SHEEHAN (Fallen Soldier's Mother): I think that it has really been a good thing because it's opened up a dialogue on the war, and people are putting their money where their mouth is. We've had thousands and thousands of people come from all over the world to be here at Camp Casey, and I think a peace movement has galvanized and something big has started here in Crawford.

CHADWICK: You've attracted a lot of attention from people who don't like what you're doing as well. There are complaints that you also misrepresent military families--that is, that many...

CHADWICK: President Bush has said that he recognizes your right to do what you're doing, to be an activist, but that to get out of Iraq now would be to create a worse situation than exists now, that this would be a real step back.

Ms. SHEEHAN: Well, his invading a country that was no threat to the United States of America was a huge step back, and I believe our military presence there fuels the insurgency, and his justification for the war now is we have to continue killing Americans and Iraqis 'cause we've already killed so many, and I think that is the most insane and immoral reason to continue a war ever.

Ms. SHEEHAN: I disagree. We do not need our military presence there. Like I said, it's fueling the insurgency. And for us to think that we have to help Iraq rebuild their country, that's very arrogant and racist. You know, I've had a lot of Iraqis tell me, `You know, we were doing math and engineering before your civilization was even thought of. We've handled a lot of problems. We can handle these problems.' And we caused these problems; America caused the problems they're having now.

CHADWICK: America didn't cause the situation of Saddam Hussein.

Ms. SHEEHAN: Oh, we didn't? We propped him up and sold him weapons for years. We propped him up in his war against Iran, and I have to wonder for the rest of my life if my son was killed by a weapon that America sold to Saddam. Another thing is Saddam was a bad man. But that's not why the president told us that we were invading Iraq. He told us it was because Iraq had weapons of mass destruction and that Iraq had something to do with 9/11, and both of those were lies. He never said anything about Saddam. He never said that we were going to spread freedom and democracy; it's just an ever-changing ephemeral mission. And now the mission is to kill more people because so many people have already been killed.

In 2009, karma came for Alex Chadwick and his lying ass got fired from NPR.  "Even people who are critical of the president -- very critical of the president -- say that you shouldn't just get out of Iraq . . ."?  The series he was doing was supposed to present a variety of voices but it didn't and it had Alex editorializing the whole time.  There were many of us calling for US troops out of Iraq.  And wanting it now.  At one point, that's what the Out of Iraq Caucus in Congress stood for -- when they stood for anything.  Then in August of 2009, revealed as whores and abject failures, their leader Maxine Waters gave a b.s. speech insisting that they had called for troops out of Iraq but hadn't failed because, please understand, they never said when.

Whore wants to say that the Out of Iraq caucus had no demands and she got away with it.  She's been whoring ever since when she should have been facing a reckoning for her failures and for her lying.

We couldn't get answer back then and we still can't.  Cindy wanted Bully Boy Bush to explain what "noble cause" her son died for.  Never got an answer.

The Iraq War continues and we still are not given an answer as to why.

Why are US troops still in Iraq?

Back in 2005, Alex The Whore Chadwick insisted US troops had to remain in Iraq because  "the Iraqis just aren't capable of staving off this insurgency on their own and that for a stable, healthy political and national situation to develop in Iraq, Americans have to be there longer."  How's that going?  Still the same story.  And it forever will be at present.  That's because a government and officials were imposed upon the Iraqi people.  There is no buy-in.  Cowards who fled the country in the 70s, 80s and 90s and only returned after the fall of Baghdad were made prime minister over and over.  Those cowards don't inspire trust.  They keep their dual citizenship -- the current prime minister is Mustafa al-Kadhimi and he has Iraqi citizenship and UK citizenship -- because they're never sure when they might have to bail on Iraq again.  But, hey, let's pretend these cowards can lead a country.

They can steal from the public trust.  They've nearly bankrupted the oil rich country -- a country that brings in billions and billions in oil revenues each year.  They're trying to start austerity measures at present -- long a goal of the US government which spent the bulk of the early years of this ongoing war trying to gut the rations program.  Because heaven forbid a government provide its people with the basics like rice, tea bags, flour, etc.  2021 may be the year the US government finally gets what it has long wanted -- to spread austerity throughout Iraq.

Austerity.  That's what the US government always wanted to create.

The US is currently not spreading democracy anywhere in the global south that it claims it's doing. Nicaragua, Chile, Brazil, Haiti, Iraq, Afghanistan etc. It's an endless thief of resources where they appointment their own people to power in this countries. They are causing harm
7:49 AM · Feb 9, 2021

Next month, the Pope is planning to visit Iraq.  If the visit takes place, he will be the first pope to visit Iraq.  It will also be, CATHOLIC NEWS AGENCY points out, the Pope's first international trip since the COVID pandemic started.  VATICAN NEWS notes the schedule:

Pope Francis' Apostolic Visit to Iraq begins on Friday morning 5 March when he departs from Rome and arrives at Baghdad International Airport in the afternoon.

The official welcome ceremony will take place at the Presidential Palace in Baghdad followed by a courtesy visit to the President. Pope Francis will also meet with civil authorities and members of the Diplomatic Corps.

Meeting with Priests and Religious

As part of the schedule on Friday, the Pope will meet with Bishops, Priests, Religious, Consecrated Persons, Seminarians and Catechists at the Syro-Catholic Cathedral of Our Lady of Salvation in Baghdad.

Visit to Najaf and Mass in Baghdad

On Saturday, 6 March, Pope Francis will depart Baghdad for Najaf. Following a courtesy visit to the Grand Ayatollah Sayyid Ali Al-Husaymi Al-Sistani in Najaf, Pope Francis will fly to Nassirya for an interreligious meeting at the Plain of Ur.

On his return to Baghdad in the afternoon, the Pope will celebrate Holy Mass at the Chaldean Cathedral of Saint Joseph in Baghdad.

On Sunday morning, Pope Francis will depart for Erbil. On arrival at the airport, he will be welcomed by religious and civil authorities from the region of Iraqi Kurdistan before continuing his journey by helicopter to Mosul. While there, he will recite a prayer of sufferage for the victims of war at Hosh al-Bieaa (Church Square).

Meeting with community in Qaraqosh

The Pope will again take a helicopter to Qaraqosh where he will visit the Qaraqosh community at the Church of the Immaculate Conception.

In the afternoon, Pope Francis will return to Erbil where he will celebrate Holy Mass at the “Franso Hariri” stadium. Following the celebration, the Pope will depart for Baghdad.

After a farewell ceremony on Monday morning, Pope Francis will depart for Rome. He is expected to touch down at Rome’s Ciampino airport later in the day.

Sura Ali (RUDAW) observes, "The pope's visit comes at a time when only a few hundred thousand Christians are left in the country.  Only 400,000 are estimated to remain in the country, down from 1.5 million in 2003."

"For 30 minutes, all I did was write down names, including of boys as young as 10." The mass grave of the missing men and boys appears to have been discovered last week. https://english.alaraby.co.uk/english/Comment/2021/2/5/Mass-grave-discovery-highlights-Iraqs-impunity-gap
@belkiswille
.

And from the same article, she highlights:

"I am losing track of the number of times I have documented allegations of killings in Iraq, only to read later that a mass grave was discovered right where the killings allegedly occurred. I cannot remember a single time where mass killings by Iraqi forces were investigated."

In the US this week, PBS's FRONTLINE is airing a program on Iraq:

Allegations that Iranian-backed Shia militias are threatening and killing critics with impunity and targeting U.S. interests; how COVID-19 is worsening Yemen's humanitarian crisis.