THE THING ABOUT PAM

Wednesday, March 30, 2022.  Another MOqtada failure in Iraq as Whoopi Golberg continues to conduct herself in an unethical manner.

We're back on Will Smith's assaulting Chris Rock at the Academy Awards.  I hope we'll be off soon.  We're gong to note Jimmy Dore and we're going to note Betty and then I'm gong to write about whoopi Goldber who needs to learn to shut her damn mouth.  That's why I'm covering it again.  I do think it's worth covering.  I'm glad it's being covered.  But I did not plan to do three days worth here.

I don't approve of people who break the rules.  That's not Will, he's a psychopath who needs to be punisehd.  But I believe we've made that point here.  I'm referring to Whoopi Goldberg who has her own actions this week to apologize for and whose actions have been highly unethical.

Chris Rock didn't joke about her hair -- she's got no hair.

Grow the hell up.

And I'm sick of the boo-hooing from her and other women who are bald.

Did you lose both legs like Tammy Duckworth in Iraq?

I don't like Tammy, she's to the right of me politically.  But I don't hear her whining.  She's taking care of business.  She wants a family?  She starts a family.  She can't fly in to vote on House membership and Nancy refuses to let her vote via phone, she doesn't whine.

I don't think I could handle losing both legs.  I don't.

But I damn sure can handle losing my hair.  I'd wear a wig if it happened.  But I could handle it.

Jada Stinkit, you've have access to millions of dollars, you have two kids, you have your own talk show, grow the hell up, you ungrateful fool.

God has been very kind to you.

There are people in the US who had their whole faces burned in Iraq.  There's the Iraqi girl who had acid thrown on her face.

These people are dealing with real issues.

You don't have hair?

Do you know how many children with terminal illness would give anything in the world to have their biggest problem be that they didn't have any hair?

You are a stupid, an ignorant and an ungrateful woman.  I hope God brings you to your knees.  How dare you spit on everything you've been given.  You're a greedy sinner who thinks you deserve everything so you can't say a thank you for all that you do have.

You were given so much -- that night alone, you got an Oscar, but there were you attacking poor Chris Rock.  There you were striking him and cursing at him and doing it on live TV.  You aren't an adult, you're not fit to be in an adult coversation.

Exatly, she should be on her knees giving thanks that her big problem is being bald.  Again, it's not life threatening.  Betty's right, there are kids with cancer who would gladly switch places.  There are veterans from the Iraq and Afghanistan Wars who have lost limbs, who have lost sight, who have lost hearing, you name it and those men and women are dealing with real issues.  Jada's bald.  If she can't handle that, she's more pathetic than her husband.

Now let's go to the woman whose mouth always runneth over.  Monday, on THE VIEW, Whoopi Goldberg declared that Will Smith would not lose his Oscar following his Sunday assault of Chris Rock.  Monday, the Academy announced that they had started an investigation into the events.  Tuesday, Whoopi made various claims on air -- no, she couldn't support them and I know at least one was an outright lie.

Anyone see the problem?

I know Whoopi's a problem.  She's a nightmare.  She's so unhappy she can't stop eating even though her blood sugar is destroying her body.  No one cares enough to tell her that because she's such a bitch that no one really cares about her anymore.  Some people even encourage her to keep eating, ekeep eating.  They say it's to keep her happy but maybe it's to help her along to the other side.  Who nows?

What we do know is that she needs to shut her damn mouth.

I'm not serving a term on the Board of Governors.  Whoopi is.

How real and fair is this investigation going to be when Whoopi is already telling the wold on THE VIEW what the outcome's gong t o be.

She needs to shut her damn mouth.

She's unethical.  She wants to talk about it during an ongoing investigation?  She can resign her seat.

But while she holds that seat, she needs to shut her damn mouth.

I have not heard Larua dErn (who I know and love) say a word about it since the investigation has been launched.  Nor have I called her to say, "What do you think?"  Because she's really not able to comment.  The same with Rita Wilson.

But Whoopi -- the owman who told us that Roman Polanski drugging a 13-year-old girl and then having sex with her wasn't "rape-rape" now wants to come along and defend another who doesn't deserve defending.  Reminds me how tight Whoopi used to be with Harvey Weinstein.

Whoopi needs to shut her damn mouth or resign her seat.  Holding that seat and making the comments she's making could potentially influence the outcome of the investigation.  She needs to shut up.

Her conduct is outrageous and idiotic.  I realize she's not educated and not too bright, I've spoken with her many times.  So maybe she's so damn stupid that she doesn't grasp the ethical conflict she has created.

She needs to shut her damn mouth now.

I don't watch THE VIEW.  I know of this because members of the Acdemy are talking about.  Are talking about her.  Everyone is offended by what she's doing.

HOw real do most people think the investigation is going to be?

Some mebers (including me) don't think it's going to amount to anything.  Others think it might make a difference.  But everyone agrees that the Academy announced it to improve their own image and Whoopi, a sitting member of the Academy's Board of Governors, passing her opinions (where she dimisses it and underplays the assualt and creates -- cause she can see into peoeple's souls, you understand -- excuses for what happened) is a conflict of interest and could influence -- or even appear to influence -- the investigation.

She needs to shut her mouth.

As I heard about it from one person after another, I got transcripts of Monday and Tuesday's shows and read over her remarks.  They are utrageous considering the position she currently holds.  I don't think she's qualified to weigh in on anything.  But she's certainly not ethically allowed to be saying what shes saying right now while the Academy is conducting an investigation.

The words she's struggling for are: I cannot comment while the Academy is conducting an investigation.

That's all she really has to say.

In real life, Whoopi Goldberg is a monster.  She is not the character she has played.  (She can only play one character, if you haven't noticed -- sometiems, she lucky to pull off even one.)  She was a nightmare from the beginning.  She was so rude and ugly to Penny Marshall who was doing her a damn favor.  The director of JUMPING JACK FLASH was not working and the film could have been shut down.  Penny ws brought in to save it.  And Penny did.  Sher realized the limitaions of WHoopi and shot around those, she created additional business in the script for other characters, she brought in talented supporting actors.  She made that film watchable.  None of Whoopi's comedies are in those early years.  How many times are we going to blame everyone else for Whoopis's failures?  At any rate, whoopi was a real bitch to Penny.  I heard about it from Penny in real time and we're all talking about it now and what a bitch she was on this set, and on that set and . . .

The reason I'm bringing this up is she better curb herslef or she's going to be curbed.  She has no friends in the industry and she's pissing people off by refusing to condcut herself as a member of the board should.  If she can't curb her comments, people will be seeking for the Academy to correct her behavior.

Grasp that she wants tow weigh in daily on what should be done about a violation and that in weighing in she is also committing a violation.

Get some flash cards, maybe a dry erase board, a sippy cup filled with juice and someone sit her down and explain it to her.

#BREAKING Iraqi parliament fails for the third time to elect a state president over a lack of quorum http://Arab.news #Baghdad #Iraq 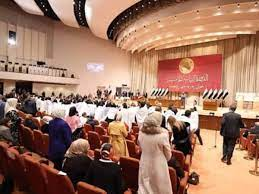 Are we still calling Moqtada l-Sadr a "kingmaker."

He filed to get his nominee elected in Feburary.  He failed over the weekend.  And now hes failed again.  Three times now. Three announced votes.  And the Parliament's not showing up.  They're making it clear that ehy don't support him.

I thought he was supposed to be a ''kingmaker."  Guess he is just a cult leader and he's now a cult leader who is trying to install his cousin as prime minister.

When is the western media going to stop glorifying Moqtada.

And when might they start doing their thought pieces about how wrong 'others' were to immediately declare Moqtada a kingmaker and a stateman?  Others because they won't point the finger at themselves.

Moqtada is ahateful man who repeatedly destroys his own standing.

I told yout he cult was dwindling.  Motada's condeming female protesters and insisting that men not protest with women was rejected by the youthful protesters who saw it as outdated and wrongful thinking.  We've covered that at lenght.  We've also covered how Sadr City remains a slum.  He can't provide for his own cult.

WHile the western press was insisting the October 10th elections were a glory moment for Moqtada, we were pointing out that not only was it Iraq's lowest turnout ever but that Moqtada's bloc actually got fewer votes than they had in the previous election.

Yet the media promoted Moqtada as though he were a world leader.

He may eventually get a presidnetial nominnee in place and a prime minister desginate.  Eventually.

But it's about to be April and elections were held October 10th.  It's going to be six months after the election shortly and the poltiical stalemate continues, drags on.  Moqtada is not a national leader, he's not a kingmaker.  He is the leader of a cult and it's a cult that hs signficantly decreased.

#Iraq-i lawmakers have failed for a third time to elect a new national #president, for lack of a quorum, officials say, prolonging the political paralysis in the war-scarred country. https://english.alarabiya.net/News/middle-east/2022/03/30/Parliament-fails-to-elect-Iraq-president-for-third-time