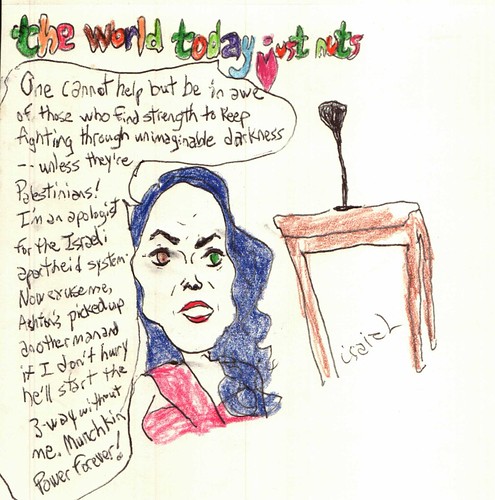 From  this morning, Isaiah's THE WORLD TODAY JUST NUTS "Pro-War Munchkin Mila."  Now for this past weekend, here are the top 11 films at the box office:

That's going to look different because I'm not using the same browser, I'm trying Avast out.

I did the top elven because of THE CONTRACTOR.  It's number 11.  That is not good.  But this Chris Pine film had a troubled history and the original company making the film is no more and went bankrupt.  I don't think it even played in my area.

I liked "MORBIUS" but apparently I'm in the minority.  That's fine.  I think it's a good movie.

I also think that i's a sign that we shouldn't act like things are back to normal. Spider-Man and Batman have built in audiences and just bringing in the two past Spider-Men into this film was going to boost it.

Just being from MARVEL and DC isn't going to be enough.

I think the Sandra Bullock and Channing Tatum film is the one to watch.  There's a lot excitement building.  Will this help drive that film to $100 million or will it stop around $75 million?  Whever it lands, that's going to be the benchmark for non-super hero films for the foreseeable future.

Monday, April 4, 2022.  As the political stalemate continues in Iraq, Ayad Allawi is hospitalized, Julian Assange gets another court date and much more.

Over the weekend a video from BREAKTHROUGH NEWS almost made it up at this site.  Almost.  The host listed a number of ongoing wars in her opening.  She did not list Iraq.  I believe she even listed the Afghanistan War -- a war that US forces are supposedly out of -- but she didn't list Iraq.

This is the "Iraw dnapshot" and while vatrious people are willng to betray Iraq, I'm not.  US troops remain on the ground in Iraq, the war there continues.  This woman has a history of getting Iraq wrong.  Over and over.  And now she can't even list it as an ongoing war?

No, I'll stand with the people of Iraq, thank you.

We are read -- and cited -- in Iraq (including regularly by one Iraqi newspaper).  I'm not going to betray those human beings with a video that erases them and treats them as though they are nothing.

As though they dont even matter.

An Iraqi security source announced that an explosion had taken place in the path of a US convoy in Saladin province in northern Iraq.

The convoy was carrying logistics belonging to the US-led international coalition.

But, hey, BREAKTHROUGH NEWS says nothing to see here, right?  Over the weekend, WCBS reported:

Staffers at a New Jersey school helped a soldier surprise his mom.

Sgt. Jake Pletsch had been stationed in Iraq since March 2021, but he got home a month earlier than expected.

His sister and staff at George White Middle School in Hillsdale staged a “Lost and Found Day.”

Again, that war continues and the suffering of the Iraqi people contiues.  How sad that a supposed independnt outlet wants to render them invisible. 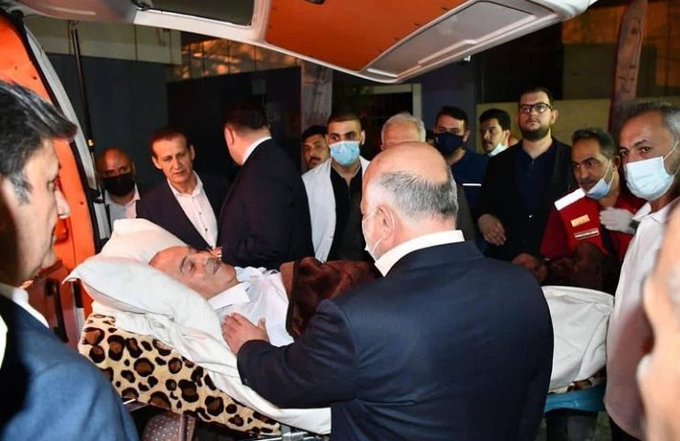 Ayad allawi.  Social media has him in the hospital with his condition deteriorating..  Allawi was the man who was supposed to be prime minister in 2010.  Iraqis were tired of the divisions and wanted a united front.  That's whythey backed the bran new party Iraqiya which had a place for everyone, regardless of sect, regardless of gender, regardless of divisions.  It wasn't just lip service.  They had Shiites and Sunnis.  They had women in important roles.  It was a rejection of the fundamentalism that the US had imposed upon them.

And Allawi should be prime minister.  But Nouri, the incumbent, would not allow it to happen.  Nouri's loss came as a surprise to some.  He haede bribed ahead of the election -- heavily bribed.  Certainly NPR was susprised since they put Quil Lawrence on air less than 48 hours after voting and Quil declared a big win for Nouri.  There was no big win when the votes were counted, not for Nouri.

And he refused to step down.  That was something Gen Ray Odierno had warned of -- then the top US commander in Iraq.  Then-US Ambassador Chirs Pig-Pen Hill, roused himself from his daily naps long enough to insist that wouldn't happen and, besides, Nouri would win.  Chris was wrong on both counts.

Eight months of a political stalemeate followed.  Despite the US government originally insisting that the will of the Iraqi people would be followed, the US went back on that.  Then-Vice President Joe Biden would oversee The Erbil Agreement, a contract that overturned the vote and gave Nouri a second term.

Joe would insist to Allawi's face that this was good because it guaranteed that Allawi would be over national secuirty (among other things).  When the Parliament finally met to name a president and to designate a prime minister, Allawyi's people walked out as Nouri immediately made indications he would not honor the contract.

Barack Obama himself then called Allawi and implored him to get his MPs back into the Parliament, he promised that the contract had the full backing of the US government.  It would be enforced.

It wasn't.  That was November.  By January, Nouri's spokesperson (who would later flee the country when Nouri turned on him) insisted that the contract was illegal (it probably was) and NOuri would not be bound by it.

Nouri would use it to get his second term and then he would discard it.

Iraq could have moved forward on a mission of uniting further and leaving the violent divisions behind.

But Joe and Barack saw to it that didn't happen.

Now, as Iraq is once again in the midst of another political stalemate, an important voice is side-lined and may be about to pass away.

At a time when Iraq really needs him.

Though Iraq held elections October 10th, Iraq still doesn't have a new prime minister -- they don't even have a prime minister-designate.  Moqtada al-Sadr wants that person to be his cousin but the cleric and cult leader has failed for months not to form a large enough coalition for a new government.  He hasn't even been able to see his nominee for president (actually nominees -- the first was struck down by the Iraqi court) be confirmed -- which is actually the step required before you can even move on to the topic of prime minister.

Last week, Moqtada finally announced he was going to step away for forty days to see if anyone else could form a government.  The KDP and the Sunnis supporting Moqtada immediately stated that they would remain firm with Moqtada.

Their leaders said that.  The goal now is for opposing groups to try to peel away that support.  In the past that hasn't been difficult.  Who was it that mastered peeling away support?  Getting members to step away from their leaders?

Nouri al-Maliki, former prime minister and forever thug.  Two terms as prime minister -- elected neither time.  First time 2006 and he was supported by Bully Boy Bush due to the infamous CIA profile on him which found his motivating force was paranoia which, the CIA believed, could be used to manipulate and control him.  In 2010, the voters tried to kick him out of office but the US government wanted him to remain prime minister.  So Joe Biden oversaw the negotiations of The Erbil Agreement which tossed aside the votes and gave Nouri a second term.  President Barack Obama had put Joe in charge of Iraq and -- like an Academy Award Board Governor -- when a test came up, Joe failed.

The second term led to the rise of ISIS in Iraq.

The leader of the State of Law Coalition, Nouri al-Maliki, said on Wednesday talks will begin between allied political parties to take initiative toward negotiations between all factions. #NRTnews

In The Video.. The arrival of the head of the State of Law coalition, Nouri Al-Maliki, to the Shiite framework meeting room in Al-Amiri's office. #Iraq
3:31 AM · Mar 30, 2022

Perhaps the most detested man in Iraq, former Prime Minister Nouri Al-Maliki, has exploited the deadlock to insist that his faction must be part of any future “consensus” government — even though the leader of the largest faction, Moqtada Al-Sadr, has insisted on Maliki’s exclusion because of the numerous catastrophes he has inflicted upon Iraq at the bidding of Iran and sectarian militants. Sadr told Maliki and Hashd leaders: “I will not reach consensus with you. Consensus means putting an end to the country… What you describe as political deadlock is better than agreeing with you and dividing the cake with you.” Nevertheless, the result is likely to be indefinite deadlock.

Joe Biden has done so much damage to Iraq.

He does a great deal of damage period.  He continues to persecute Julian Assange because Julian carried out the 'crime' of journalism.  Joe, if you haven't noticed, doesn't care for journalists or journalism ("he's a real son of a bitch," for example).  Julian exposed US War Crimes in Iraq and Joe wants to punish him for reporting on that.

The UK’s Westminster Magistrate’s Court has set a hearing for April 20 to authorize the extradition of WikiLeaks founder Julian Assange to the United States, where he is accused of espionage and could face up to 175 years in prison. for the publication of classified official documents.

“The Westminster Magistrate’s Court has set the hearing to issue the extradition order for Julian Assange to the United States for Wednesday, April 20,” WikiLeaks itself explained in a message posted on Twitter.

“The order will then go to (British Home Secretary Priti) Patel for approval. Assange’s defense will be able to present allegations to Patel” until May 18, the organization added.