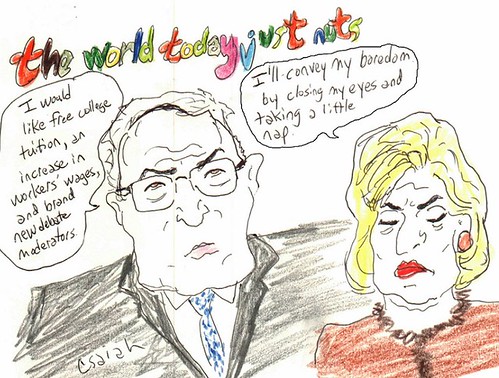 That's  Isaiah's   "What Bernie Wants for America" -- one of his three cartoons covering the Democratic Party's presidential debate last Saturday.

So much I even streamed HIGH SOCIETY -- an awful film where Grace Kelly tries to be Katharine Hepburn (the film's a musical of Hepburn's classic PHILADELPHIA STORY).

It's one of the many Sinatra films that have been showing up on Netflix lately.

Others include PAL JOEY (Ann wrote about that film here), ANCHORS AWAY, ON THE TOWN and SOME CAME RUNNING.

My own personal favorite Sinatra film?

Either THE DETECTIVE or THE MANCHURIAN CANDIDATE.

FROM HERE TO ETERNITY is good but I'm not a fan of Burt Lancaster or Deborah Kerr.

And I got this at Barnes & Noble so there was no discount.

The book is entitled SINATRA: THE CHAIRMAN.

Does the world need another Sinatra book?

Yes, it does if it's one written by Kaplan.

He does a really strong job -- even when you know the incidents and stories already.

He's also clear eyed about Mia Farrow -- a huge plus in a Sinatra biography.

Mia loves to play like she's the innocent who things just happen to but she's actually hugely manipulative (as was noted of her character in HUSBANDS & WIVES) and this book captures that.

Including the break up and how Mia orchestrated the rematch while pretending otherwise.

Kaplan captures a lot of things other writers haven't.

So even if you've read about Sinatra in another book, this book will still be fresh.

Friday, December 25, 2015.  Chaos and violence continue, Christmas is observed in parts of Iraq, international law is ignored by the US State Dept, and much more.

RT InternationalRussian intelligence has spotted up to 12,000 tankers and trucks on the Turkish-Iraqi border, the General Staff of Russia’s armed forces has reported.


The tensions between the two governments is only increasing.

Thursday, the Arab Leauge weighed in on a matter that's caused controversy throughout this month: Turkish troops in Iraq.  TODAY'S ZAYMAN brings everyone up to speed:

Earlier in December Turkey sent a contingent of additional forces to bolster its military presence in the Bashiqa camp near Mosul to train local forces in the fight against the Islamic State in Iraq and the Levant (ISIL). The move prompted a backlash in Iraq, sparking a diplomatic spat between Ankara and Baghdad. Last week, the Iraqi government brought the issue to the UN Security Council to demand the unconditional and full withdrawal of Turkish troops.
At first, Ankara said it deployed forces in coordination with the central government in Baghdad. The Iraqi authorities said they had never invited such a force and it happened without its approval and knowledge. To defuse tension, Ankara partially withdrew its forces from the camp and re-stationed them further north in the Kurdish region.
Unsatisfied with that, Baghdad pressed for the withdrawal of all Turkish troops, a demand yet to be met.


And yesterday?  SPUTNIK reports, "Turkey must withdraw immediately all its troops from Iraq without any preconditions, a statement unanimously adopted by members of the Arab League said Thursday."  AFP notes:

The Turkish deployment "is an assault on Iraqi sovereignty and a threat to Arab national security," they said in an Arab League statement after meeting at the pan-Arab bloc's Cairo headquarters.
Arab League deputy chief Ahmed Ben Heli read out the statement at a press conference, in which he added that the Turkish troops "increased tumult in the region."


Iraq's Foreign Minister Ibrahim al-Jaafari reports SPUTNIK, told the Arab League, "We are not threatening for now. But if our security and integrity is continued to be threatened, I will use all legal means to respond to the attack. Every option is on the table."

The issue had been raised most recently at the US State Dept's Monday briefing moderated by spokesperson John Kirby.

QUESTION: Iraq, John? On the situation in Bashiqa. Last Friday --

QUESTION: Last Friday, the President Obama made a phone call with Turkish President Erdogan on this issue again. And according to the readout, the U.S. side urged the Turkish side to withdraw all its forces from Iraq. Do you have any update on this? Is – the withdrawal is achieved over the weekend, according to your --

MR KIRBY: If what was achieved?

QUESTION: The withdrawal of the Turkish forces is achieved?

MR KIRBY: I don’t have an update on Turkish military movements. I think you should – I would refer you to the Turkish Government for specifics on that. What we have said is we’re encouraged by the dialogue between the two countries, and we’ve seen the reports of Turkey’s intent to withdraw. We welcome that, because the third point I’d say – we’ve always made this clear – is that whatever military activity is going on inside Iraq needs to be done with the approval of the sovereign Iraqi Government. And so our view is we want this worked out bilaterally between the two countries. We’re encouraged by the dialogue that they’ve had and the progress they seem to have made. But I can’t give you a up-to-date tick-tock on exactly where Turkish troops are right now. I don’t know.

QUESTION: Yeah, but the Iraqis brought this issue to UN Security Council also. It’s not anymore a bilateral issue. So as a chairman of the council – I mean this month, U.S. – what is the U.S. position on this issue? Is there any timeframe for the withdrawal, for example, or I mean – because the Iraqis are – I mean, it’s said that – Foreign Minister Jafari – they will carry on the process until the full withdrawal is achieved.

MR KIRBY: I understand. And they have every right to pursue their sovereign ends the way they believe they need to pursue them. Our view is that we would prefer to see this worked out bilaterally. It appears that that is what is happening, and we want to see that continue.

MR KIRBY: I’m not going to speculate about an action the council hasn’t taken yet. And I don’t speak for the UN. I know we’re the president, but I speak for the State Department and for Secretary Kerry. Our view is we want this resolved bilaterally. They continue to have discussions and talk through this, and we think that’s the right approach. But as exactly where Turkish troops are right now, you’d have to talk to the Turkish Government.

QUESTION: Yeah. Last one on this. One of the arguments that the Turks raised on this issue: If the Turks will withdraw from the region, ISIL is – will be replacing the Turkish forces in the region. Is it a reasonable argument, do you think? I mean, can ISIS, for example, fulfill the gap in the region after the withdrawal?

MR KIRBY: As I understand it – and again, I’m not going to speak to Turkish military activities. But as I understand it, it’s a training presence that they have there. And I don’t know of any – of any training mission that ISIL’s taken on with respect to forces in northern Iraq, so I don’t see how you can compare the two. But again, you’d have to talk to Turkey about what they’re doing with their troops and on what timeframe.

We continue to want to see the sovereign integrity of Iraq respected and for military activity inside Iraq to be done with the full approval of the Abadi government, as ours is. And we want these two countries to work this out between themselves. Again, they appear to be doing that and we’re encouraged by that. Okay?

John Kirby lies on behalf of the State Dept -- there's no polite way to put it.

When Turkey began bombing northern Iraq (again) this year, Iraq's government objected and the US State Dept -- and Kirby himself -- gave Turkey a pass.  They did more than that.  Kirby went on record stating Turkey had a right to bomb northern Iraq in order to 'protect' and 'defend' itself.

That was Turkey's "right," according to Kirby and the US State Dept but Iraq does not appear to have the right to insist Turkish troops leave Iraq -- not in the eyes of the State Dept.


This should not be a 'both sides' issue.

Does a nation-state have the right to demand foreign troops leave its territory or not?

If it does have that right -- and the history of law and treaties says it does -- then the only answer is for the US government to support the legal right of Iraq's government to demand that Turkish troops leave Iraq.

This is not a gray area.

This is established law that's been in place for centuries.


And it seems like the US government has been bombing Iraq for centuries but the latest wave of bombings only began in August 2014.  It continues with the US Defense Dept noting yesterday:


Strikes in Iraq
Attack, bomber and fighter aircraft and rocket artillery conducted 18 strikes in Iraq, coordinated with and in support of Iraq’s government:

-- Near Kisik, one strike struck an ISIL tactical unit and destroyed an ISIL fighting position.

-- Near Sultan Abdallah, one strike suppressed an ISIL mortar position.

December 25th is Christmas, celebrated throughout the world -- including in Iraq.


Yesterday, ALSUMARIA reported that the Chaldean Church in Kirkuk held mass.  NATIONAL IRAQI NEWS AGENCY adds that Ayad Allawi issued a statment congratulating the Iraqi people and Muslims and Christians throughout the world on the anniversary of the birth of the Prophet Mohammed and on the anniversary of the birth of Jesus Christ while hoping  that the coming year finds Iraq free of the "scourge of war" and terrorism and that the country -- and the world -- can strive towards the teachings of tolerance in Islam and Christianity.  He declared that attempts to purge the region of Christians should be seen as an attack on Muslims as well and the unity of the entire community.

ALL IRAQ NEWS notes that Christmas services were held in Baghdad today.

ALSUMARIA offers a photo essay of Christmas service in Baghdad.