A day after CBS handed a pilot order to a comedy starring Matt LeBlanc, Fox has given the pilot green light to a comedy toplined by another former Friends star, Courteney Cox. The single-camera Charity Case (working title), was written by former The Office writer-producer Robert Padnick.

Since appearing in Bruce Springsteen's "Dancing In The Dark" video, Courtney Cox has had quite the career.  She's Gail Weathers in the SCREAM franchise.

She was Alex Keaton's girlfriend on FAMILY TIES.

She was Monica on FRIENDS.

And she was Jules on COUGAR TOWN.

Except for Lucille Ball and Jane Curtin, I'm hard pressed to think of many who can boast of that level of success.

I like Courtney and am still shocked that she never got an Emmy for FRIENDS.

For the episode where Monica and Ross did their AMERICAN BANDSTAND dance alone, she should have won.

I will be giving her Fox sitcom a look and chance if Fox decides to air it.
Going out with C.I.'s "Iraq snapshot:"

Tuesday, February 9, 2016.  Chaos and violence continue, Canada announces when they'll leave Barack's bombing campaign, Ramadi is finally liberated (all these weeks after it was first proclaimed liberated), the voters of New Hampshire overwhelming choose Bernie over Hillary, and much more.

Today, the US government continued its bombing of Iraq in US President Barack Obama's efforts to bring peace to Iraq.  The US Defense Dept claimed/bragged/announced:

Strikes in Iraq
Coalition forces used rocket artillery and attack, fighter, and remotely piloted aircraft to conduct 18 strikes in Iraq, coordinated with and in support of Iraq’s government:

-- Near Huwayjah, a strike struck an ISIL tactical unit.

-- Near Fallujah, a strike destroyed an ISIL-used bridge.

-- Near Tal Afar, a strike suppressed an ISIL rocket position.
Additionally, a strike in Iraq from Feb. 7 was not included on the Feb. 8 strike release:

Today, Canada's Prime Minister Justin Trudeau declared, "It is important to understand that while airstrike operations can be very useful to achieve short-term military and territorial gains, they do not on their own achieve long-term stability for local communities."

Trudeau was quoted by Susana Mas (CBC News) who reports that he has announced February 22nd as the day "Canada will cease all coalition airstrikes against the Islamic State in Iraq and Syria."

Canadian troops will now "focus on training and advising local security forces to take their fight directly to ISIL," according to a government statement.

Canada says it will still assist with aerial refueling and surveillance activities associated with the airstrikes.

At his Twitter feed, Trudeau went over the basics:

If you're not getting what a failure Barack's plan or 'plan' has been, today the US State Dept presented the USAID request for fiscal year 2017.

They trumpeted the following:


Strengthen reforms in Afghanistan and Pakistan, with $1.45 billion to sustain gains made in these strategically important countries, from improving the performance and legitimacy of the Afghan government to promoting a stable, secure and prosperous Pakistan that counters violent extremism. The budget will also support work to continue strengthening each country’s economy, and advance ambitious reforms in a variety of sectors, including energy, agriculture, education and health.

There are no reforms to strengthen in Iraq.

Sure, in June 2014, Barack declared the only solution to Iraq's various crises was a political solution.  But State's pretended it's the Defense Dept and John Kerry, Secretary of State, has made a spectacle of himself on the international stage and is little more than a laughable stooge these days.

As we've noted before, he's gone around pressing foreign governments to send troops into Iraq instead of working on diplomacy and fostering a better government in Iraq.

His efforts with other countries?

They're a bit of bust.

And that's why Barack's contemplating putting even more US "boots on the ground."

And it's why, at NEW ZEALAND's SCOOP, Gordon Campbell notes the reality of what the US is attempting to force others into doing:


Foreign news services are being more forthcoming about what those “next 12 months” will entail – essentially, the defence ministers will be under US pressure to increase their “training” role preparatory to an assault on the city of Mosul in northern Iraq:
US officials – who have been pushing Iraq to launch an assault on Mosul following recent successes including the recapture of the city of Ramadi – have repeatedly highlighted the need to increase the number of Western trainers in Iraq. The question is expected to be taken up during a February 11 meeting of coalition defence ministers.


A failure.  That's what Barack's 'plan' has been.  THE NATIONAL NEWSPAPER reports today that Ramadi and its surrounding areas are finally liberated.  Susannah George (ASSOCIATED PRESS) words it this way, "Iraqi government forces have regained full control of Ramadi after pushing Islamic State group fighters out of the city's outskirts, according to Iraqi security forces and the U.S.-led coalition. The announcement, more than a month after Ramadi was first declared liberated in December, underscores the slow nature of Iraqi ground operations despite heavy backing from U.S.-led coalition airstrikes."


"Ramadi is liberated, or it is if you change the meaning and definition of liberated, even in congratulations Secretary of State John Kerry notes that Ramadi is not liberated, none of the bombings address the root causes of the Islamic State, and much more."  That's from the December 28, 2015 snapshot -- as is the following:

Ramadi, they say, is liberated.
As we noted this morning, any announcement of Ramadi being liberated should have come from Prime Minister Haider al-Abadi.  Instead, it came from the military underscoring how precarious Haider's position actually is.  (It was only weeks ago that US senators, in a public hearing, were wondering how much longer Haider would be able to hold on.)
Six hours after the military announced 'liberation,' someone thought to toss Haider before the cameras.
Stephen Kalin and Maher Chmaytelli (REUTERS) report that he declared Ramadi liberated and insisted they would be tackling Mosul in the near future.


That was December, this is February.  Not only is Ramadi only now liberated but Mosul's still not tackled.  Guess "near future" means something other than "near future."


Barack's 'plan' has only focused on bombing the Islamic State (sometimes hitting them, sometimes hitting civilians) and on (yet again) training Iraqi forces.  Alice Fordham (NPR) points out, "But ISIS is just one of many groups trying to carve out power for itself in a country where the central government is looking ever weaker."

And nothing's being done to address the persecution of the Sunnis -- the very thing that fueled the rise of the Islamic State in Iraq.  Former European Parliament Struan Stevenson writes at Scotland's THE HERALD:


The city of Ramadi in central Iraq was captured by so-called Islamic State (IS) in May last year. It was a city of more than one million, mostly Sunni, people. Last month, most of the city was recaptured by the Iraqi military, with the assistance of Shi’ia militias, funded and led by commanders from the Iranian Quds Force, a listed terrorist organisation.
Nine months under the control of [the Islamic State] was devastating enough for Ramadi but the final onslaught during the battle for its recapture has seen virtually every building in the city destroyed; only a handful of women, children and elderly men remain. Some estimates state that the population numbers less than 1,000. The ruthless Shi’ia militias have waged a genocidal campaign against the Sunni population, torturing, burning and butchering at will. Thousands of civilians have been killed. The men of Ramadi between the ages of 14 and 70 have simply disappeared. Some say they are being held in secret prisons; others claim they have been murdered.


Shocking reports have emerged of the organised slaughter and execution of Sunni citizens in Diyala Province and the blowing up of Sunni mosques in the town of Meqhdadiya. Regrettably, the government of Iraq and the US administration have been silent in the face of these atrocities perpetrated by the militias affiliated to Iran who operate under the leadership of Hadi al-Ameri, commander of the terrorist-listed Badr Organisation. Ayatollah Khamenei, Iran’s Supreme Leader, has faced a humiliating climb-down over his efforts to secure a nuclear weapon. Iran’s economy was crumbling under the combined weight of international sanctions and the collapsing oil price, forcing it to seek a deal with the West. In a bid to buttress his beleaguered regime, Khamenei is trying to extend Iran’s influence in the Middle East. His efforts to shore up the gore-encrusted regime of Bashar al-Assad have fuelled the civil war in Syria for the past five years, creating the perfect environment for IS to exploit and expand. Khamenei, in turn, uses IS as his excuse to provide money, men and material to bolster the scorched-earth campaign by the Shi’ia militias in neighbouring Iraq. Western silence on this carnage has simply contributed to the spiralling sectarian war that threatens to tear Iraq apart.


It's a shame nothing's been done to address issues like that.

It's more than a shame, it's a crime -- and falls under the legal definition of War Crimes.


Moving over to one specific War Criminal, Hillary Clinton.

Cranky Clinton is yet again having trouble sealing the deal when it comes to garnering the Democratic Party's presidential nomination.

This go round, she's competing against Senator Bernie Sanders.

Today, they faced off in the first primary the United States holds: New Hampshire.

Bernie Sanders Verified account ‏@BernieSanders 4h4 hours ago
When we stand together, we win. Thank you, New Hampshire! 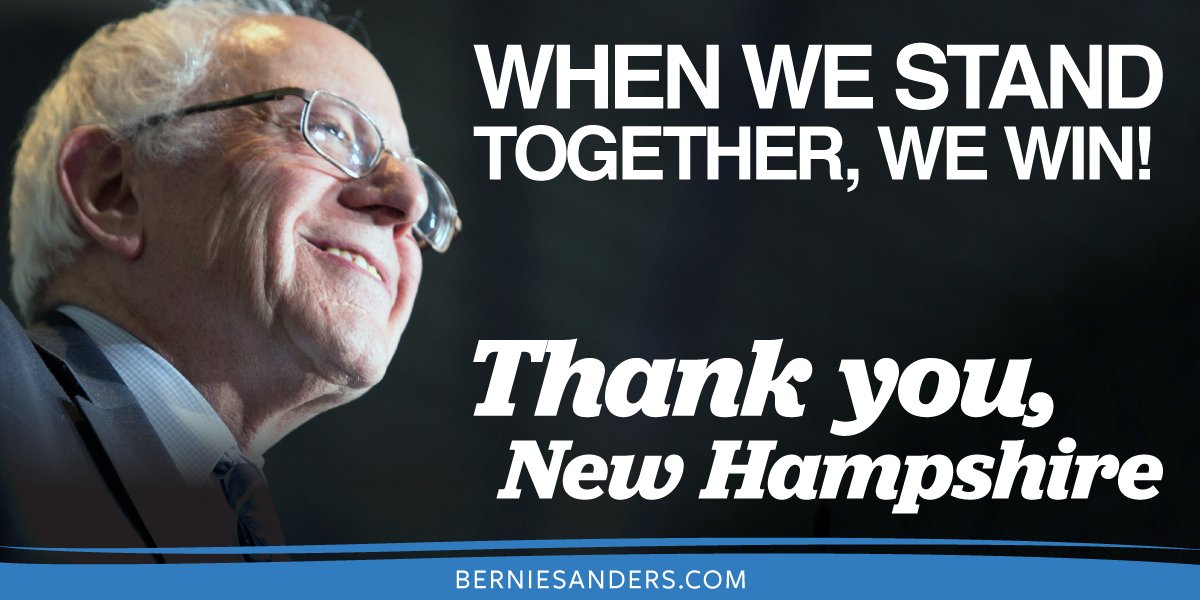 David Sirota (IBT) offers his take on the night which includes:


Just as notable, New Hampshire Democratic voters revealed a party that appears to have become more left-leaning than ever. According to the New York Times , a full “two-thirds of voters in the Democratic primary said that they are liberal, up from 56 percent who said the same in 2008, the last time there was a contested Democratic primary.” Clinton tried to appeal to more centrist Democrats by, for instance, dismissing Sanders’ push for a single-payer Medicare-for-all health care system, but two-thirds of the increasingly liberal Democratic electorate told exit pollsters that they support such a system.
Sanders’ laser-like focus on populist economics and confrontational anti-Wall Street themes resonated with Democratic voters who said the top two issues they were concerned about were inequality and the state of the economy — a shift by a party that during Bill Clinton's administration often elected more corporate-friendly candidates who downplayed inequality and promoted a so-called “third way” of cooperation with the financial sector.


And we'll note this Tweet which reflects the mood of many:


But not everyone was as underwhelmed by Hillary's speech . . .