The crimes of the Obama administration did not, as far as one could tell, trouble the sleep of anyone in these circles. The allegiance of the wealthy Hollywood crowd to the Democratic Party remains unbroken. To a considerable and unhealthy extent, the gathering Sunday was not an assembly of serious artists, but a celebration by wealthy celebrities.

That really says it all.

Tuesday, September 19, 2017.  Chaos and violence continue, in the midst of yet another panic Rob Reiner gets into bed with a ton of men who supported the Iraq War, the KRG prepares to hold the September 25th referendum, Turkey sends the military to the border they share with Iraq, Nancy Pelosi finds out immigration activists won't pretend she was elected to Congress yesterday, and much more.


Ted Johnson (VARIETY) reports today, "Director Rob Reiner is joining a new group called the Committee to Investigate Russia, to highlight what is known about the Russian threat to interfere with American elections and other institutions."  The committee finds Reiner joining other paranoids who indulge in fake news and run from facts.

In fact, it's a lot like when Reiner cozied up to Mildred Newman.

She ran through many people on both coasts.

They mistook her quackery for medical help.

Even though her 'findings' were questionable even in 1970.

For example, she specialized in conversion therapy.

Oh, the man still sucked cock, he just pretended he didn't -- pretended all the way, in Anthony Perkins case, to the grave.

Mildred took self-hating gay men and taught them to pretend they weren't.

(It's said she did the same thing with pedophiles, taught 'em to pretend they didn't do it anymore while they continued to molest.)

And, of course, the ultimate way to pretend you weren't gay was to insist that you were in an "open" marriage.

Mildred taught so many HOW TO BE YOUR OWN BEST FRIEND -- mainly by denying who they were:

Analysts once thought that they had little chance of changing homosexuals' preferences and had little success in that direction. But some refused to accept that and kept working with them, and we've found that a homosexual who really wants to change has a very good chance of doing so. Now we're hearing all kinds of success stories. The nature of homosexuality hasn't changed, but the way of looking at it has.

Iraq War supporter David Frum's among the many hacks involved with this new project which begs the question:  Why did so many of Mildred's clients end up seeking rough trade?


If there's a Russian hiding in a closet anywhere across America, Rob will find him!

Back in the real world, Tessa Paoli (VICE NEWS) reports:

When U.S. Army Capt. El Cook started as a freshman at West Point in 2009, he enrolled as a woman. At the time, Cook knew he was transgender, but he also knew that if he came out, he would never be able to pursue his dream of serving in the U.S. Army.
Despite his fears, Cook decided in his junior year in 2012 to start his medical transition, but because trans people were still banned from the military, he kept it a secret. He drove an hour and a half from West Point to New York City every couple of months to see a civilian doctor, paying out-of-pocket for hormone replacement therapy.
Although his physical appearance was changing every day, he tried not to bring extra attention to himself and continued to wear a female uniform and go by female pronouns at school. No one at West Point asked any questions.
Five years later, Cook, now 30, is a captain in the U.S. Army based at Fort Campbell in Kentucky. He’s completed two combat tours: one in Kuwait in 2015 before his gender confirmation surgery and another afterward in Iraq in 2016.


Trans people can and have served.  It's only shocking if you shelter yourself from reality.  (In Rob Reiner's house there are many closets . . .)

Of course, in a functioning society, we wouldn't make people defend their right to serve in a standing military, we'd instead question why we have a standing military, why wars never ends and why the US, all these years later, remains the "Cops of the World" -- as was the case in 1966 when Phil Ochs' PHIL OCHS IN CONCERT was released.


"We'll find you a leader that you can't elect" certainly describes Iraq where the US has installed Nouri al-Maliki for two terms and now Hayder al-Abadi.

Two exiles who couldn't stay in Iraq, or the Middle East, two cowards who fled the country only to return after the 2003 US-led invasion.

Who wants to be ruled by cowards?

Who wants to be ruled by leaders chosen by a foreign country?

September 25th, the KRG is scheduled to hold a referendum on whether or not they should seek independence.  RUDAW explains, "The Kurdistan Region accuses Baghdad of having violated about one-third of the Iraqi constitution, chief among them Article 140 that concerns the fate of the disputed areas such as Kirkuk, and also a decision by the Iraqi government to cut its share of the budget since early 2014 following the Kurdish plans to export oil independently of Baghdad to the world’s markets."

This has been poorly covered by the western media from day one.  Far better is the analysis ALJAZEERA offers by Ranj Alaaldin.

Today, REUTERS notes, "Turkey escalated its opposition to a Kurdish independence referendum in northern Iraq on Tuesday, training tank guns and rocket launchers across the southern border and saying the break-up of its neighbors could lead to global conflict."


That's another sign of just how out of control the Turkish government is and, in fact, in many cases, such actions would be seen as a declaration of war.

PRESS TV adds that "Turkey launched a military exercise without warning across its southern border with Iraq which is scheduled to last until September 26, a day after the planned referendum."

Of course, the Turkish government has so many problems -- and that's not just their government employed bodyguards facing charges in the United States.  But on that, they lost the weapons US President Donald Trump announced they were going to get.  RUDAW notes:

US lawmakers began expressing strong opposition to the sale following violence at a protest outside the home of the Turkish ambassador to Washington when Erdogan was visiting the US on May 16.

Video of the protest showed security guards and some Erdogan supporters attacking a small group of protesters with their fists and feet.

Men in dark suits and others were recorded repeatedly kicking one woman as she lay curled on a sidewalk. Another wrenched a woman's neck and threw her to the ground. A man with a bullhorn was repeatedly kicked in the face.

The protestors, who included US citizens, as well as Kurds, Yezidis, and Armenians carried anti-Erdogan signs and flags of the YPG.

A total of 19 people, including 15 identified as Turkish security officials, were indicted last month by a grand jury in Washington in connection with the incident.

Two strikes in one day.  Based on the statements of the government who ordered and carried out the strikes.  No one on the ground to check it out.  Nor will there be any follow up.  Most of the time, these strikes kill animals, villagers, farmers.  But, hey, let's just go with what Turkey claims happened, right?  The Turkish government would never lie, right?  No government would ever lie, right?

It's not like the US government lied about Iraq, right?

If they had -- if David Frum and others had lied -- surely Robbie Reiner wouldn't hop in bed with them, right? 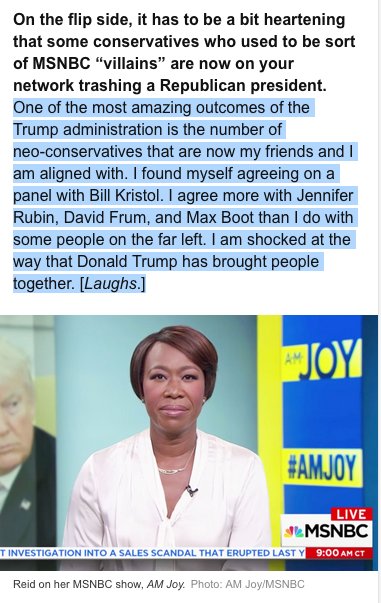 Kurdistan President Masoud Barzani gave Baghdad three days to reach an agreement with Erbil, backed by the international community, providing an alternative to the referendum that will eventually lead to “independence.”

Speaking at a rally for independence in Soran on Tuesday, Barzani said their problem is not with the international community, which has offered to mediate between the regional and central governments, but “We have to reach an agreement with Baghdad.”


“But I will be honest with you, Baghdad has not reached that level yet,” he added, giving the central government a deadline of “two to three days” to reach such an agreement. 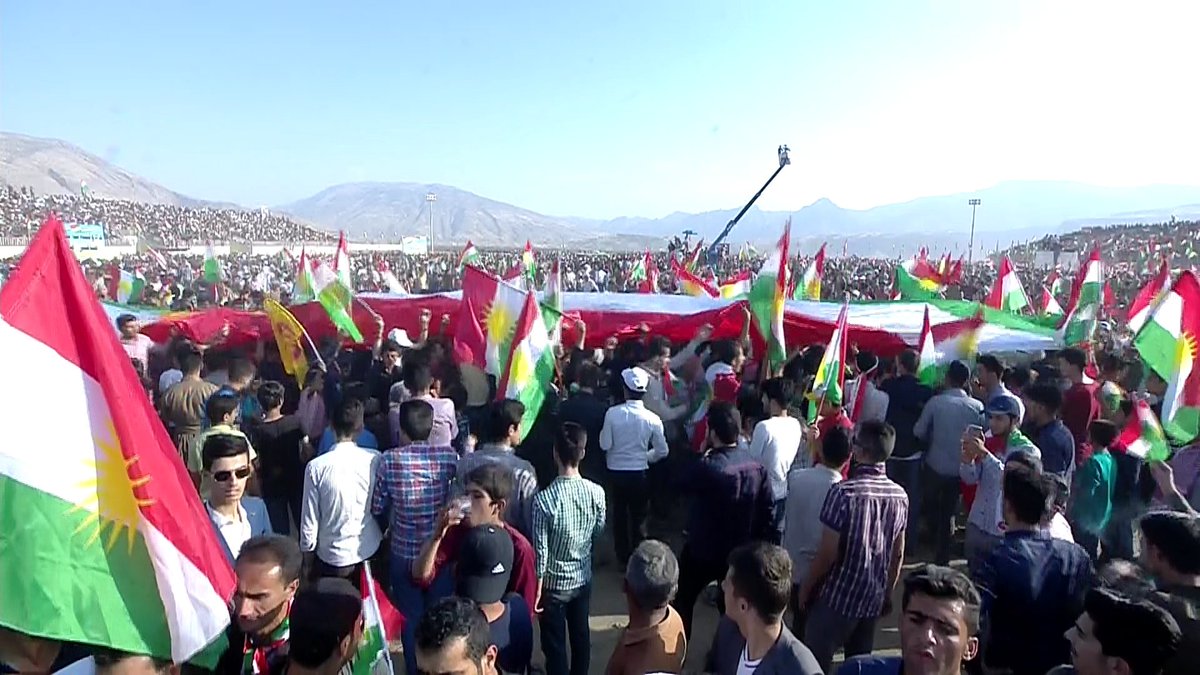 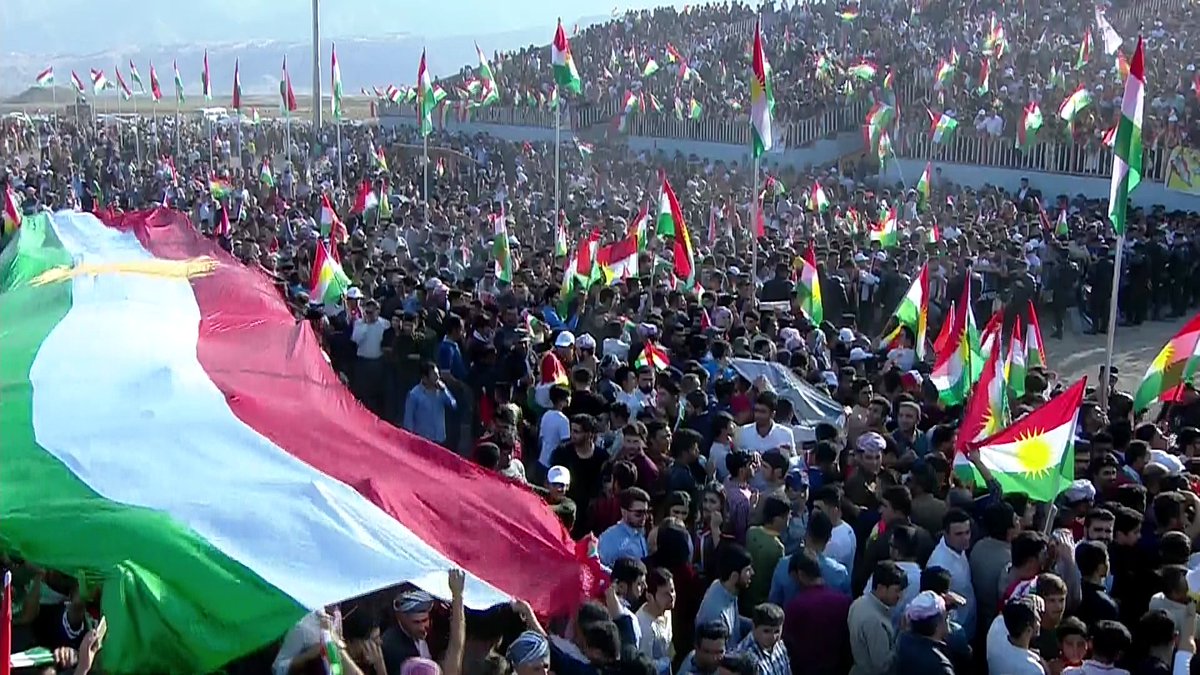 
And here's a shot of support for the referendum from Lebanon. 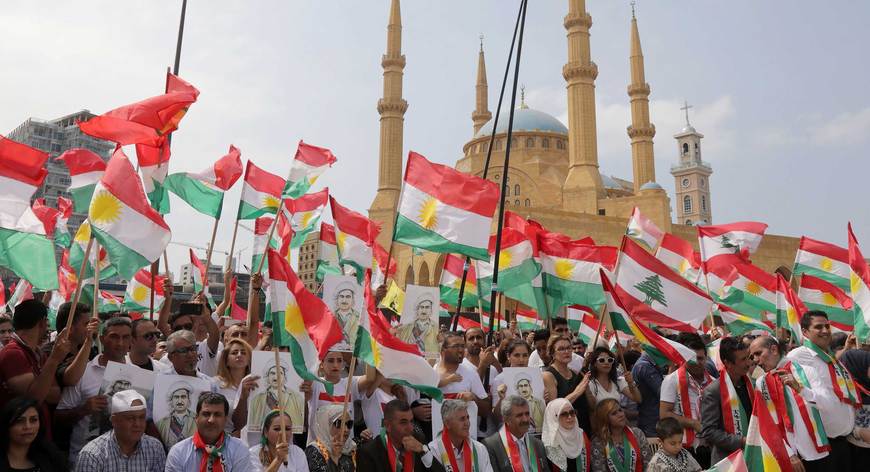 
Barzani suggested that the significance of the referendum had been “exaggerated” by the international community. “It should be seen for what it is and what purpose it serves.”
The Prime Minister also explained that the international community, led by the US, was telling the Kurdish leadership that the referendum should not take place or should be delayed.
“Our question is: if the referendum is such a bad thing, then what will be the alternative,” Barzani said. “And if the timing is not right, can you say what the right time for us would be?”

“So far, we have not had a response to these questions,” he explained. All that we have been told is that the referendum should be postponed,” while they do not offer any alternative.


In other news, KUNA reports an attack in Saladin Province left 3 people dead and thirty-four injured.

'All of us or none of us' Crowd takes over DREAM Act event. Pelosi getting blasted by about 100 young 'undocumented youth'
274 replies393 retweets597 likes

In video footage of the event, Pelosi is visibly shaken and can be seen nervously speaking with her aides, prompting a protester to address her directly, saying, “Nancy Pelosi, we’re speaking to you, please pay attention.”
The first protest leader led the group in chanting, “We, the undocumented youth, will not be a bargaining chip for Trump’s xenophobic agenda, deporting millions of people and further militarizing the border!”
She then noted, “Democrats created an out-of-control deportation machine and handed it over to Trump! We demand accountability! Democrats are not the resistance of Trump! We are!”
The second protest leader put forward a somewhat sharper denunciation of the Democratic Party, describing the reign of terror imposed on immigrant communities during the Obama administration.
He began by calling out Pelosi for her duplicity, chanting, “Congresswoman Pelosi! You called this press conference in our name, to defend the so-called Dream Act! But you’ve already traded in our parents in our name! First you said you supported a clean Dream Act, and then last week you announced that you had agreed with President Trump, and I quote you, ‘To work out a package of border security.’ Your words, or were you misquoted?”
He continued, “We cannot say, however, that we are surprised. We remember all too well, how for eight years the Democrats laid siege to our communities, raiding and deporting nearly 3 million people, our family members and loved ones. Where was your resistance then? Ms. Pelosi, did you think we would forget?”

North Korea is @realDonaldTrump's Iraq. @SenFeinstein voted for the Iraq War, and she just voted yes on $700 billion for Trump's war chest.


There's no plan to end the Iraq War, just plans to fund it forever.

Today's vote for more defense spending. The highlights are Nays. @SenKamalaHarris @CoryBooker @SenWarren this was your 'Invade Iraq' moment. 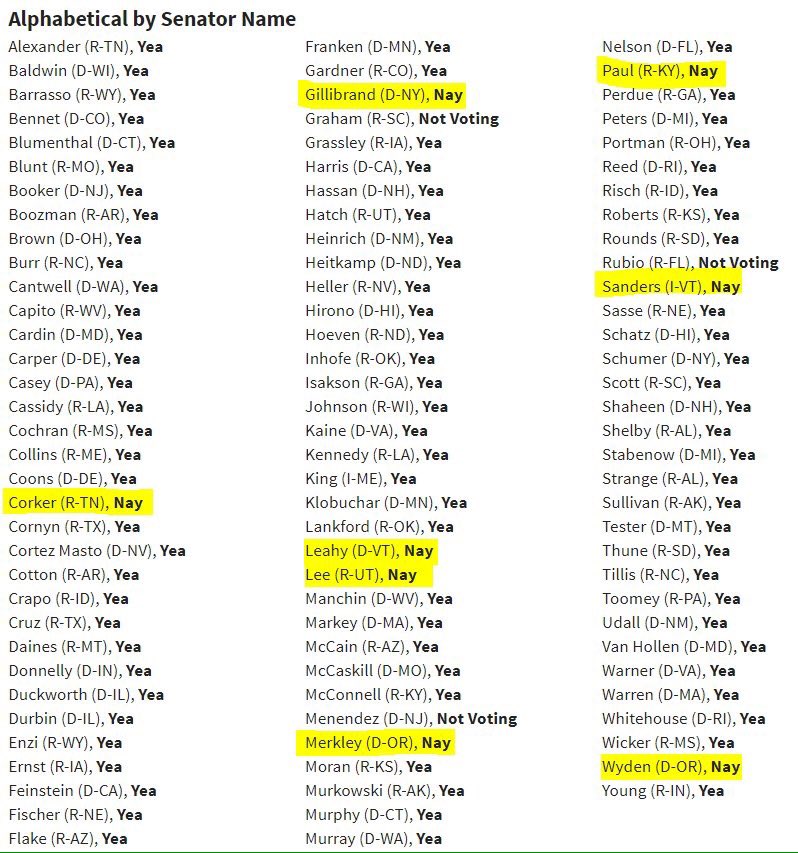