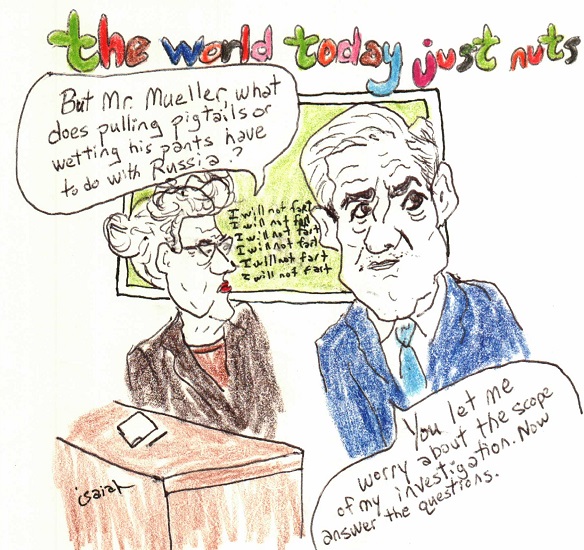 Above is Isaiah's THE WORLD TODAY JUST NUTS  "The Scope of the Investigation" one of three comics he did Sunday.

So, the latest episode of EMPIRE.

There's one more to wrap up the season next Wednesday.

Not really impressed at all.

Best moment of this week's episode was at Sean's funeral.  (Lucious killed Sean the episode before last.)  During all the 'drama' that was boring, Becky and Jamal are seated by each other and Becky says she should have hooked up with Sean when he wanted her.  Now he's dead.  It was so silly, so out of nowhere and it made me laugh.

Anika's back on.  She wants control of Empire Records.  You think that would add spice but it doesn't.  She basically just talks to Forest Whittaker's character.

I thought Demi Moore was the only good thing about this season.  And tonight's episode was pretty much pointless.


Let's start with the media and when they think they are self-critiquing.


Imagine if every interview with John Bolton or Benjamin Netanyahu included these questions. 1) You say inspections can't verify Iran's disarmament. Didn't you say the same about Iraq? 2) Why doesn't Israel permit inspections of its nuclear weapons program?
18 replies141 retweets203 likes

Peter then links to his piece at THE ATLANTIC claiming Iraq amnesia among the public allows the Iran deal to be walked away from.

First, notice that in these pieces the Iran deal is "good."  We don't examine it any more than we did when Ben Rhodes was manipulating the press in real time.  We don't examine it, we don't detail it, we just pronounce it good.  And, as proof of its goodness, we note that John Bolton's against it.

Second, if there's Iraq War 'amnesia' it's because of the media.

And if Peter wants to be against the Iraq War today (the one he was for when it started), maybe he should answer about his amnesia.


Who has the amnesia?

Seems to me if you were a gas bag talking the nation into war with Iraq in 2003 and you claim, years later, you're against it, you should be gas bagging constantly about how to end the Iraq War.

Or is it all just a word game for you?

The fact is there’s no known mission end for Iraq, yet. Top commanders, waiting to be told by Washington to get bigger or smaller, just keep going. And that’s the worry of Americans back home, who largely marked the invasion’s 15th anniversary — if they noted it at all — by wondering what the U.S. is still doing there, and how long it’ll last.

The Iraq War continues.  The US is still bombing Iraq.

But while the Defense Dept issues announcements about their bombings, these announcements don't make the TV news or register because they're barely covered -- if at all.

In Peter's piece, he goes out of his way to write of the Iraq War as something far int he past.  That's on him.

That's also why a disaster -- an ongoing disaster -- is seen by some today as no big deal.  Baxter Oliphant (PEW RESEARCH) noted in March:

Fifteen years after the U.S. invasion of Iraq in March 2003, the American public is divided over whether using military force was the right decision.
Nearly half (48%) of Americans say the decision to use military force was wrong, while slightly fewer (43%) say it was the right decision, according to a Pew Research Center survey, conducted March 7-14 among 1,466 adults.


Peter knows that poll.  He uses -- misuses -- it in his article to slam Republicans while failing to note that Oliphant states the partisan attitudes or more less the same as they were years ago on this topic.


Poor Peter, it's a hard life where ever you go.

The single biggest reason Iran's regional position has gotten so much stronger is....the Iraq war. In other words, the last time neoconservatives got their preferred policy outcome they created the very problem they are now decrying. So what do you think happens next?
653 replies5,629 retweets16,774 likes

Chris is at MSNBC and has to work within that structure.  I do understand it.  Joy Reid's got a ridiculous Tweet about people worrying over "rhetoric."  What is MSNBC but hours upon hours of fuming over rhetoric?

But, Chris, if you feel the outcome created is so awful -- I do, as well, Chris -- why isn't that the topic of hour upon hour of your show -- or any show on MSNBC today?

If the outcome matters, then it should matter as a topic all by itself.

If you seem to believe people should learn from what came before, why the black out?  Why the refusal to cover what did happen, what continues to happen?


Neither the war nor suffering has ended in Iraq.

What has ended is the media coverage.

In what world is that responsible?  The US is engaged in war and the US media doesn't feel the need to cover it.  They will spoon feed us junk news constantly.  They just won't cover the things that truly matter.


One more time to Nanci Griffith's "It's A Hard Life Wherever You Go:"

I was a child in the sixties
Dreams could be held through TV
With Disney, and Cronkite, and Martin Luther
Oh, I believed, I believed, I believed
Now, I am the backseat driver from America
I am not at the wheel of control
I am guilty, I am war, I am the root of all evil
Lord, and I can't drive on the left side of the road

While no one in the media leads the call for a withdrawal from Iraq, the gas bags try to act as though salvation will come via Iraq's next round of elections.

May 12th, elections are supposed to take place in Iraq.  Ali Jawad (ANADOLU AGENCY) notes, "A total of 24 million Iraqis are eligible to cast their ballots to elect members of parliament, who will in turn elect the Iraqi president and prime minister."  RUDAW adds, "Around 7,000 candidates have registered to stand in the May 12 poll, with 329 parliamentary seats up for grabs."  AFP explains that the nearly 7,000 candidates includes 2014 women.  THE SIASAT DAILY adds, of the nearly 7,000 candidates, "According to the electoral commission, only 20 percent of the candidates are newcomers." Ali Abdul-Hassan and Sinan Salaheddin (AP) report, "Iraqi women account for 57 percent of Iraq’s population of over 37 million, according to the U.N. Development Program, and despite government efforts to address gender inequality, the situation for Iraqi women has declined steadily since 2003.  According to the UNDP, one in every 10 Iraqi households is headed by a widow. In recent years, Iraqi women suffered further economic, social and political marginalization due to decades of wars, conflict, violence and sanctions."    RUDAW also notes that 60 Christian candidates are competing for the five allotted minority seats.  How do they elect the prime minister?  This comes after the general election and is based on who won seats in the election.   Abdulrahman al-Rashed (AL ARABIYA) explains, "To win the premiership, a candidate needs to win the majority of the votes, i.e. the votes of 165 MPs out of 329. Since it is a multi-party system, it is almost impossible to win these votes without sealing political alliances. The governorate of Baghdad is the most important one because it is the largest with 69 seats."  The chief issues?  Mustapha Karkouti (GULF NEWS) identifies them as follows, "Like in previous elections, the main concerns of ordinary Iraqis continue to be the lack of security and the rampant corruption."  Sunday, RUDAW explained that the electoral commission "so far fined 210 candidates for violations of commission guidelines."


As noted in the April 3rd snapshot, pollster Dr. Munqith Dagher has utilized data on likely voters and predicts that Hayder al-Abadi's Al-Nasr will win 72 seats in the Parliament, al-Fath (the militias) will get 37 seats, Sa'eroon (Moqtada al-Sadr's new grouping) will get 27 seats, Nouri al-Maliki's State of Law will get 19 seats, al-Salam will get 18 seats (KDP and PUK parties for the Kurds), Ayad Allawi's Wataniya will get 15 seats. There are others but Dagher did not predict double digits for any of the other seats. The number are similar for the group of those who are extremely likely to vote (Hayder's seats would jump from 72 to 79 seats).  Other predictions?  The Middle East Insstitute's Fanar Haddad insists to Sammy Ketz (AFP) that the post of prime minister will come down to one of three people: Hayder al-Abadi (current prime minister), Nouri al-Maliki (two time prime minister and forever thug) or Hadi al-Ameria "a leader of Hashed al-Shaabi, a paramilitary network that played a pivotal role in defeating IS. Ameri comes from Diyala province and is a statistics graduate from Baghdad University. He fled to Iran in 1980 after Saddam executed top Shiite cleric Ayatollah Mohammed Baqr al-Sadr. The 64-year old is widely viewed as Tehran's favoured candidate."


Again, while no one in the media leads the call for a withdrawal from Iraq, the gas bags try to act as though salvation will come via Iraq's next round of elections.  This despite that the bulk of the candidates are the exact same ones that have campaigned in every election.  This despite systemic corruption that is now rooted in the government.  But somehow, this go round will be different.  That's not a finding that the people of Iraq believe based on real polling (real polling has a margin of error).

In 2010, the Iraqi people saw the US government overturn their votes.  Is there really a reason that they should believe voting changes much of anything?

PM @HaiderAlAbadi: All measures are now in place to safeguard the integrity of the elections on 12 May, and ensure a safe & secure electoral environment as Iraqis cast their vote to choose their parliamentary representatives