So we fire Roseanne for a bad joke but Lakeith Stanfield can do a homophobic rap and post it online and no one has a problem?

No one's talking about firing Lakeith from ATLANTA or taking ATLANTA off the air.

Remember, it's okay to hate, that's the lesson of Lakeith.

And it's okay to be greedy, as Beyonce and Jay-Z prove yet again on their latest crap-fest.  Hiram Lee (WSWS) notes:


For the rest of the time, the music industry power couple celebrate nothing so much as their own financial might. Beyoncé and Jay-Z are exceedingly wealthy. Forbes magazine’s 2018 list of “Hip-Hop’s Wealthiest Artists” put Jay-Z in the top spot with $900 million. Their 2017 list of “America’s Richest Self-Made Women” estimated Beyoncé’s net worth at $350 million.
The lyrics found on Everything is Love come across as little more than a running list of all the couple’s fancy objects. This inventory check is accompanied by soul samples and trap music, the subgenre of hip hop built around the drug culture of the southern US. Several songs fall into this routine: a single droning bass note is sounded and answered by digital handclaps on the backbeat. The gaps are filled in by ripples of synthesized hi-hats. The style of rapping associated with this genre delivers its lyrics in short bursts of a few words at a time, tossed out in an indifferent tone. For much of the album, Beyoncé’s singing voice is restricted by rapping in this style or by autotune or similar vocal effects used to create the electronic warble so much in vogue with singers in recent years.
On “Boss,” Beyoncé raps, “My great-great-grandchildren already rich/That’s a lot of brown children on your Forbes list.” Jay-Z raps, “Hundred million crib, three million watch, all facts.” In Jay-Z’s world, “invoices separate the men from the boys.” With a complete lack of self-awareness, he raps in the same song: “Pride always goeth before the fall.”
On “713,” Jay-Z begins, “Cash, hit deposit, 24-carat faucets, Louis V and Goyard trunks all in the closet.” He raps in his usual self-satisfied manner. His voice has always contained a kind of chuckle of contempt for those beneath him financially. “Black Effect” contains one of many references to luxury watches. Jay-Z raps: “Got the Richard Mille all colors, might hit you with the Rose Gold all summer.”
How does one begin to address such lyrics? It is doubtful that even the cleverest melody could render such ugliness beautiful. If there is one elementary theme running through much of the world’s greatest artwork it is that the single-minded pursuit of wealth is a soul-destroying and self-defeating enterprise. But the Carters can only sing the praises of such a pursuit. Their lyrics pile up like the expensive objects in Charles Foster Kane’s warehouse, which is full of things, but utterly empty.

They have nothing to rap about because their whole lives are fake.  They can't stop faking.

Some day, Jay Z is going to be in a big enough scandal that forces him to admit he's gay.  Until then, they're going to beard each other like crazy.

And keep making garbage that they pass off as music.

Tuesday, June 26, 2018.  Iraq's crops remain under attack as Iran and Turkey continue to divert waters, the Hobby Lobby of journalists gets called out in THE LONDON REVIEW OF BOOKS, and much more.

Wheat farmers in Iraq, the Middle East’s second-biggest buyer of the grain, may have to sharply reduce plantings for next season’s crop as neighboring Turkey diverts water from the Tigris River for its largest hydroelectric project.
The area planted for Iraq’s 2018-19 wheat crop may drop by as much as 50 percent, Hameed Al-Nayef, the agriculture ministry’s spokesman, said. Iraq will “of course” need to increase imports as a result, Mahdi Al-Qaisi, deputy agriculture minister, said. The U.S. Department of Agriculture forecasts a decline in imports for the 2018-19 season.

This news comes on the heels of the rice reports.  From last week's Josie Ensor (TELEGRAPH OF LONDON) report:

A severe water crisis in Iraq has forced the government to suspend all cultivation of rice, a staple in the war-torn country’s diet.
An unusually bad drought, coupled with new dam projects upstream of its main rivers, has led the government's agriculture ministry to take the drastic step of halting all farming of rice, corn and cereals that demand large amounts of water.


"The agricultural plan for the summer was modified because the quantities of water needed are not available", Hamid al-Nayef, a ministry spokesman, said. "The ministry does not take this decision lightheartedly."


Both Iran and Turkey are diverting waters from Iraq.  Summer has already begun and summer, for Iraq, is especially hot.  In July 2017, there were eight days where the temperature reached 122 degrees Fahrenheit.  Imagine a water shortage when the temperature hits 122.

In 2009, at PRI, Tom A. Peter noted that Iraq had been "the breadbasket of the Middle East."  That changed with the 2003 start of the Iraq War.  And Peter noted:


If Iraq does not move to repair its farming sector, it could face a food supply emergency. A USAID study predicts that Iraq will face a major food crisis within a generation unless the government undertakes a significant reallocation of oil revenue to fund imports and food production. Additionally, Iraq’s rapidly growing population and expanding middle class will also place significant strain on the nation’s food supply.


Nearly nine years later, Turkey and Iran are diverting water and Iraq is cutting back on crops.

Mena Commodities ®‏ @MenaCommodities 5h5 hours ago
#Iraq #Wheat : After halting #Rice and #Corn planting, Water-Stressed Country Very Likely To Increase Imports As Planted Area for 2018/19 Season May drop by as much as 50% Due To Turkey diverting some water from Tigris River for its "Iliya Dam” Huge hydroelectric Project (AgMin) 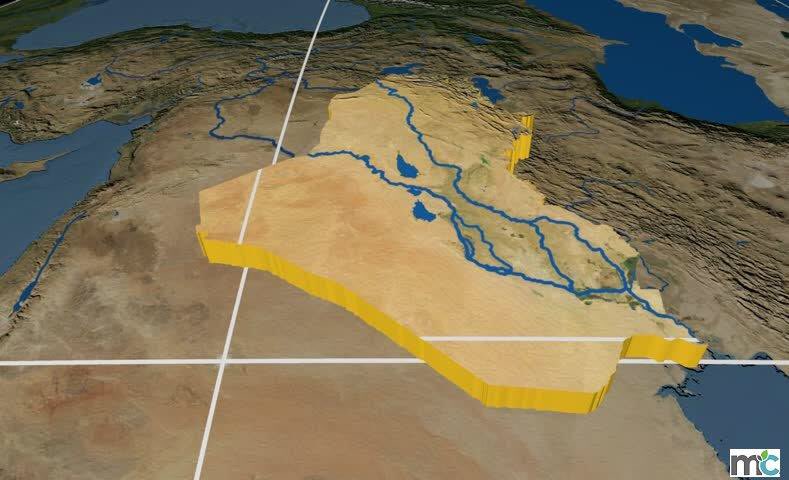 Mustafa Habib‏ @Mustafa_Habib33 Feb 6
The next danger in #Iraq not extremists or political crises but water crisis, according to Ministry of Agriculture the country lost 30% of wheat and barley production this year due to lack of water, the biggest crisis will be in summer (1) alsumaria.tv/news/228859/%D… 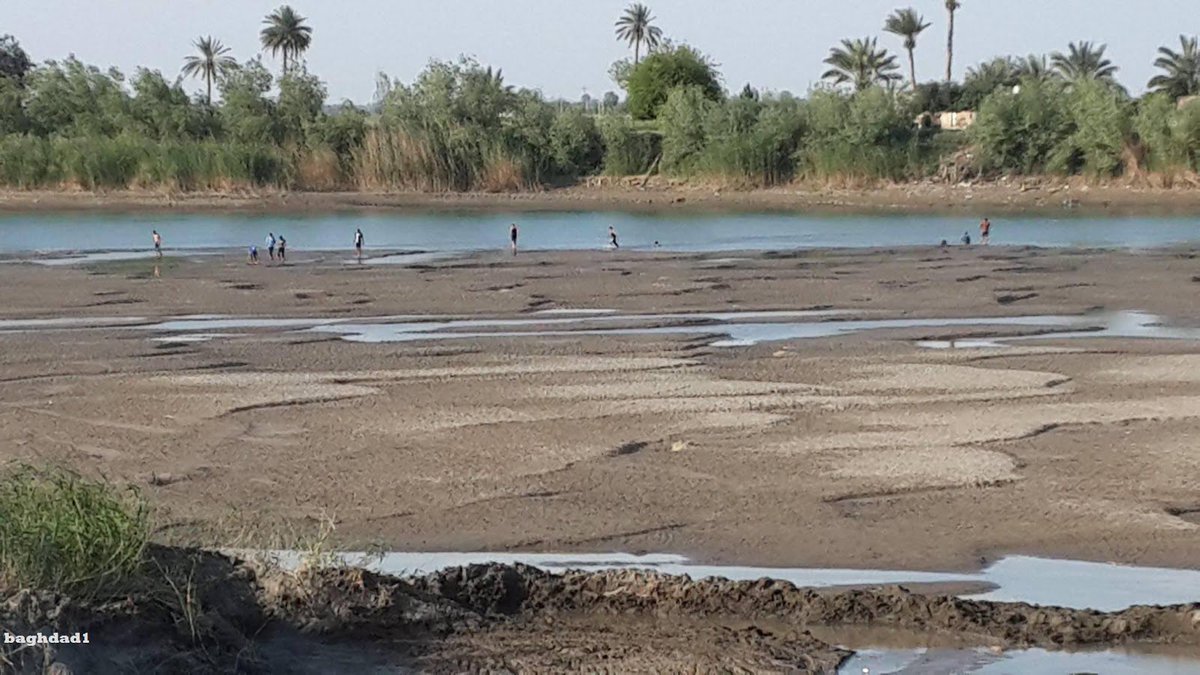 This outcome is not surprising.  As early as April 2003 (one month after the start of the US-led war), the United Nations was warning how the war could impact food production in Iraq.  From ENVIRONMENTAL NEWS SERVICE:

The war in Iraq could be devastating for the country's rural economy with consequences on farmers' capacity to produce food, the United Nations Food and Agriculture Organization (FAO) warned today. The winter grain harvest, set to begin in a few weeks, and the spring planting could both be affected.
[. . .]
Prior to the outbreak of the current conflict, Iraq was producing up to
155,000 metric tons of poultry meat and two billion eggs annually.
The war may displace people and cause loss of assets, damage to
infrastructure, breakdown of communication networks and trade, as well
as disruption of food production activities, the FAO warned.


In other news, yesterday afternoon, the US White House issued the following:


Vice President Mike Pence spoke today with Prime Minister Haider al-Abadi of Iraq.  The leaders discussed progress on certifying the May 12th election and working to form a new government that is based on the result of the election and is representative of all of Iraq’s citizens. Vice President Pence expressed gratitude for Iraq’s support to the international coalition to defeat ISIS and noted that more security and economic improvements in Iraq were necessary to capitalize on ISIS’ defeat. The Vice President and Prime Minister Abadi also conveyed their shared commitment to protecting victims of religious persecution at the hands of ISIS and discussed USAID Administrator Mark Green’s upcoming visit to Iraq in support of this effort.


Turning to the Hobby Lobby of journalists, Rukmini Callimachi, the thief will always remain in the news for her actions.  Historian Omar Mohammed speaks with Avi Asher-Schapiro (LONDON REVIEW OF BOOKS):

After the 2016 operation to drive out the caliphate, the New York Times reporter Rukmini Callimachi took nearly 16,000 documents produced during IS rule – everything from birth certificates to judicial rulings – stuffed them into bin bags, and flew them back to New York.
In Mohammed’s view, the history of Iraq, and of Mosul in particular, has too often been told and controlled by outsiders. He is still working to finish his PhD on the 19th-century history of the city but can’t access records key to his research, because they were removed from Iraq in 2007 by Dominican priests and are now housed in the US. The removal of the IS files, he says, fits into a larger pattern of pillaging that dates back centuries.
‘We as Iraqi citizens of Mosul need those papers,’ Mohammed told me recently. ‘We have to prepare ourselves for this future by using what IS left to tell the people what really happened.’ The New York Times has maintained that it saved the documents from being burned, that it had permission from the Iraqi armed forces to collect them, and that it will eventually make them available to the wider public. The Times has published small excerpts and used the documents to inform its series Caliphate, one of the 20 most downloaded podcasts in the US.
‘There’s a very fine line between very high quality journalism and trespassing – and they trespassed,’ Rasha Al Aqeedi told me. She left Mosul six months before IS took over. Sinan Antoon, an Iraqi-American novelist who was among the first to raise concerns about the documents, spoke more bluntly: ‘This is epistemic violence,’ he said. ‘Iraq and Iraqis being exploited for profit by a foreign newspaper and the result is we are not being able to narrate and understand our own history.’
Trudy Peterson, the former acting archivist at the US National Archive, told me that the guiding principle for dealing with documents after a conflict is to ‘avoid doing more damage to people who have already been damaged.’ In April, Peterson was asked by the Middle East Studies Association to examine the ethics of the New York Timesdecision. MESA wrote to the Times, emphasising that the documents ‘belong to the Iraqi people, and they need to be returned immediately to the appropriate Iraqi authorities.’ MESA was also concerned that the Times had published documents without redacting the names of Iraqi citizens, perhaps exposing them to reprisals or stigma without due process.

For those who've missed it, The Hobby Lobby Journalist has been ordered by the Iraqi government to return what she stole.  She's offered so many excuses.  None of them valid.  She's a thief.  The Queen of Cultural Appropriation, in fact.  Some applauded her but some of us spent the last years warning against her.  Those of who knew she was trash are not surprised by this latest development -- it goes to the lack of ethics that have ruled her career thus far.

They sold the Iraq War -- both in the lead up to the war and in the many early years of the war.  Not content with doing that damage, they now steal from the country as well?


And, excuse me, not redacting names?  I seem to require THE NEW YORK TIMES and others on high horse over this very issue with regards to WIKILEAKS.

The battle to #FreeJulianAssange is the battle for #memory. #Memory of all those killed in #Afghanistan and #Iraq and #Syria by the U.S. #Wikileaks has preserved that memory for posterity. The U.S. campaign to destroy #Julian and #WikiLeaks is a campaign to erase that memory.

Julian Assange remains a political prisoner.  The US and UK governments need to stop their persecution of Julian and the Australian government needs to stand up to protect its citizen.

For more on Julian, see this page at WSWS: