I've been playing around online this morning and streaming DIFFICULT PEOPLE on HULU while I did.  I watched the show when it was in production and always enjoyed it.

Here's my question: Why did HULU cancel it?

What do they have that's better than DIFFICULT PEOPLE?

With the networks rushing to reboot this and that, why doesn't HULU reboot DIFFICULT PEOPLE?

This was a great show.  They only gave us three seasons of it.

Julie and Billy were the best characters.  And Andrea Martin was so good as Julie's mother.

It had the best cast which included the trans character.  She was a great addition.

Monday, July 9, 2018.  Seems like it's taken forever but, look, slowly the western press can't begin to point out that ISIS has not been defeated.  First, though . . .


Yes, the war in Iraq drags on.

SHORTLY after the fall of the Syrian city of Raqqa in October 2017 — the centre of the Islamic State (IS) caliphate — US President Donald Trump announced that IS had been defeated and the war was won.
Nine months later it is far from clear that IS is finished and extreme paramilitary Islamist movements are increasingly active in several regions, he [Paul Rogers] writes for The Conversation.
IS had taken over much of northern Syria and Iraq, including Mosul, by mid-2014 leading President Barack Obama to order intensive air strikes to limit its spread and aid the Iraqis and others to push it on to the defensive. For close to four years an extraordinarily intensive air war was fought, principally by the US but aided by France, the UK and some other European and Middle Eastern powers.
According to the latest data from the Airwars monitoring group, over 1,424 days of air strikes, 107,814 bombs and missiles have been used against 29,741 targets in Iraq and Syria by the US-led forces. Pentagon sources speak of at least 60,000 IS paramilitaries killed but Airwars also reported 6,321 civilians killed.


We're back to where we were not all that long ago, explaining that we weren't denying credit to US President Donald Trump for defeating ISIS because, in fact, we didn't believe ISIS had been defeated.

While Paul Rogers is right to note that Donald Trump didn't defeat ISIS (and shouldn't be claiming he has), it's equally true that the western press shouldn't have been running with the nonsense that ISIS had been defeated.

It had not been.  But, golly, when Hayder al-Abadi was campaigning on the 'defeat' to argue he should be prime minister for a second term, seems like the western press couldn't tell the truth, could they?  They kept -- I'm sure by pure accident -- repeating the lie that ISIS had been defeated.

In other violence, PRESS TV notes:

Iraqi police have opened fire to break up crowds of demonstrators who had gathered near the southern oil hub of Basra to protest against a shortage of jobs, electricity, water and a number of other basic services, killing and wounding several demonstrators, local officials say.
The incident occurred at Talha district in the northern parts of Iraq's southern city of Basra on Sunday, when security forces guarding the district’s oilfields shot with live ammunition at a group of protesters who gathered on a highway, the Iraqi News website reported.


Moving on to another topic we've repeatedly cov -- Iraq's legal system is a dirty joke and we noted that fact most recently on June 29th.  This week, AP is doing a series of reports on the topic.  In one article, AP explains, "Over three days in late May, the presiding judge of the counterterrorism court in Baghdad heard an average of 12-13 cases a day and sentenced to death at least 10 defendants accused of being Islamic State group members."  June 29th, we noted:

Iraq's legal system remains a joke.  Trials take mere minutes.  There are few who receive even adequate defense.  Evidence is not required for a conviction.  Women whose 'crime' consists of being married to a member of ISIS or someone suspected of being a member of ISIS can be imprisoned and sentenced to death.

Charges -- related to ISIS or otherwise -- are often based on personal grudges and not actual events.  The whole system is a mess.

Any allegation of having taken up arms for the militant group can bring the ultimate penalty, even while the evidence is thin and cursory. The heavy reliance on informants is particularly glaring, given the potential that some are motivated by personal grudges. Informants never appear in court; their claims are passed to the judges in dry, written reports from intelligence officials with no hint of their possible motivation.
Thousands of defendants are rushed through the courts, with trials as short as 10 or 15 minutes and a third of the cases ending in the death penalty. Witnesses are rarely called and no forensic evidence presented, raising the likelihood of innocent people going to the gallows.


The ones who should go to the gallows, never do.  Take for example Mad Maddie Albright.

She's pimping a new book and a new look.  She looks like she's about to die any moment.  Of, if only.

OffGuardian‏ @OffGuardian0 Jul 8
The Guardian's interview with Madeleine #Albright plumbs new depths of hypocrisy. She's given free reign to plug her book and pontificate about the "rise of fascism". The word #Iraq is not mentioned once, neither are 500,000 children she played a part in murdering. 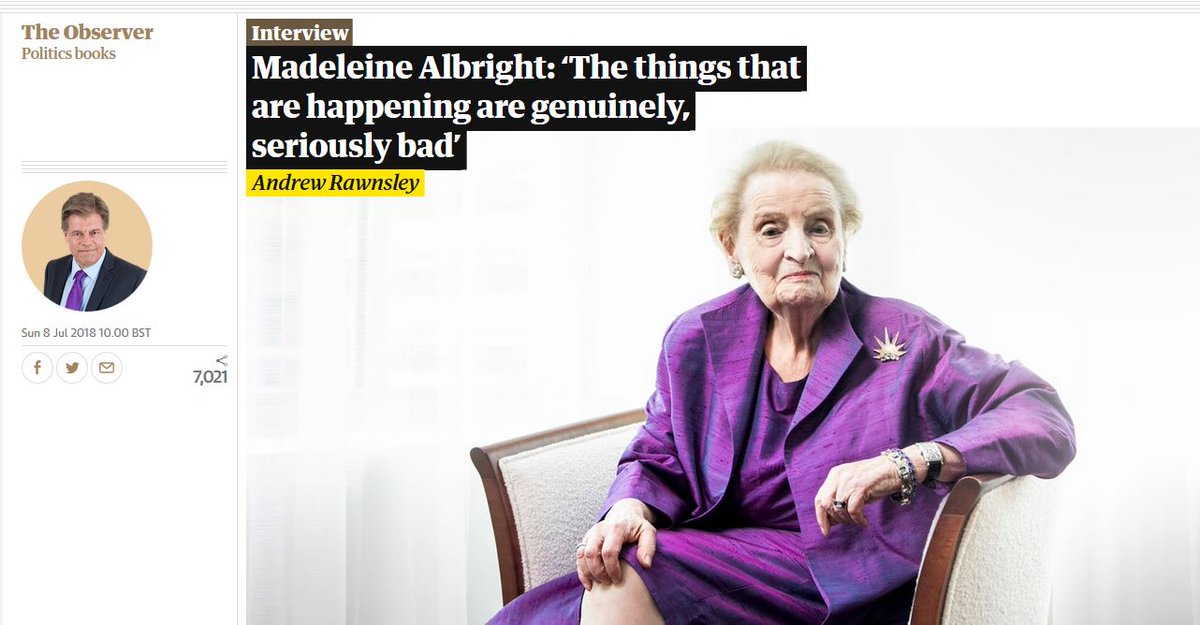 Mad Maddie, mass murderer of millions of Iraqi children, thinks her past has vanished.  No, Maddie, your criminal rap sheet remains. 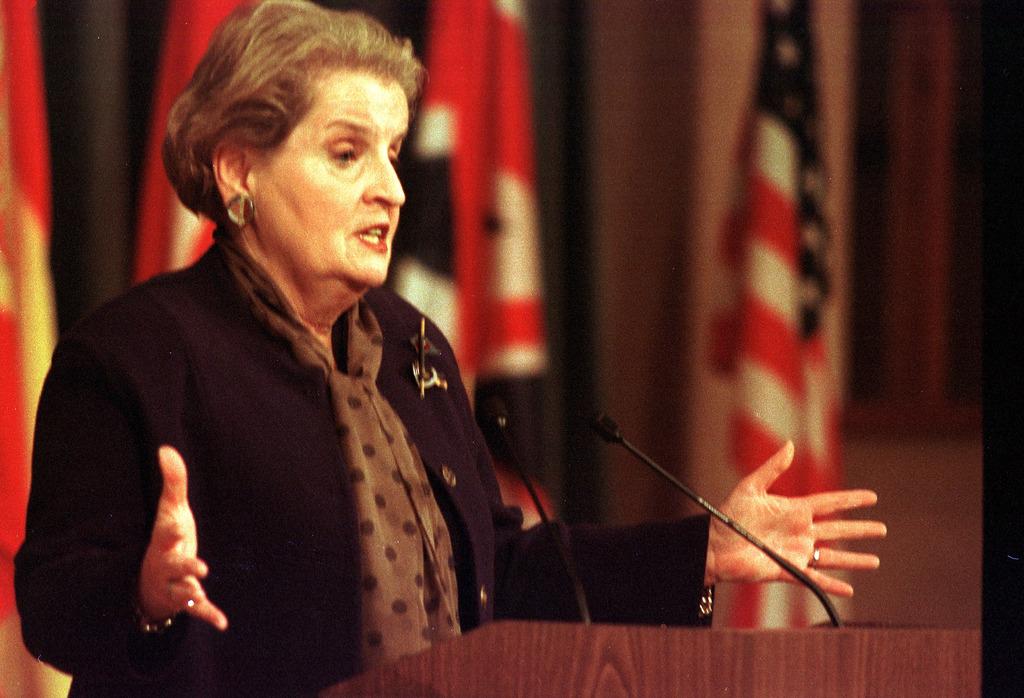 The Justin Horton Show‏ @ejhchess 3h3 hours ago
Absolutely fantastic that the Rawnsley/Albright interview neither mentions, nor even touches upon, sanctions or Iraq. So nobody's going to be owning that one, are they Andy? theguardian.com/books/2018/jul…
1 reply4 retweets5 likes

Amir Retweeted Rzb-Tom
Ask the people of Iraq a/b what happened in the 90s to 500 000 Iraqi children due to US imposed sanctions. Or ask Madeleine Albright a/b it since she thinks it was worth it because Saddam attacked Kuweit’s oil fields instead of gassing Kurds and Iranians as he was supposed to do.
Amir added,
Rzb-Tom @RazorbackTommy
Replying to @AmirAminiMD @KyleKulinski
How is Bill Clinton a war criminal?
11 replies161 retweets419 likes

Missing chapter of the book - The deaths of 500,000 Iraqi children was worth it for Iraq's non existent WMD's
0 replies2 retweets0 likes

OffGuardian @OffGuardian0
The Guardian's interview with Madeleine #Albright plumbs new depths of hypocrisy. She's given free reign to plug her book and pontificate about the "rise of fascism". The word #Iraq is not mentioned once, neither are 500,000…
0 replies0 retweets0 likes

Emile Corsaro‏ @wolves641 18h18 hours ago
Madeleine Albright: ‘The things that are happening are genuinely, seriously bad’ theguardian.com/books/2018/jul… Everthing I have learned in the last 10 years proves to me this woman is dilutions , this woman said killing half a million kids in Iraq was worth it because they have nukes.
0 replies0 retweets0 likes

zazen‏ @zazen11 19h19 hours ago
Things that happened in Iraq because of decisions taken from on high by Madeleine Albright and her cronies were genuinely, seriously bad. #justsayin
0 replies0 retweets0 likes

Carlos Coke‏ @CarlosCoke1 21h21 hours ago
Replying to @OffGuardian0 @Hebahersi
@andrewrawnsley Madeleine Albright’s on record as saying that the deaths of 500,000 Iraqi children under sanctions was worth it: m.youtube.com/watch?v=R0WDCY… In her interview printed in The Observer today, there was not one mention of Iraq. Do you know why?
1 reply2 retweets3 likes

Shailja Patel‏Verified account @shailjapatel Jul 8
Shailja Patel Retweeted Guardian US
60 Minutes, 12 May 1996 Lesley Stahl on US sanctions against Iraq: We have heard that a half million children have died...more children than died in Hiroshima... Albright: I think this is a very hard choice, but the price–we think the price is worth it. youtu.be/omnskeu-puE
Shailja Patel added,
Guardian USVerified account @GuardianUS
Madeleine Albright: ‘The things that are happening are genuinely, seriously bad’ trib.al/c5G8kmT
3 replies25 retweets43 likes

FDMillet‏ @FrancisDMillet Jul 8
She should know what Facism looks like: #MadeleineAlbright’ new book, ‘Fascism: A Warning’, discusses #Trump and #Putin. What is doesn’t mention is Albright’s deadly role in #Rwanda, #Iraq, #Yugoslavia, #EastTimor. Albright and her polices destroyed many. theguardian.com/books/2018/jul…
0 replies1 retweet1 like

Settler on Turtle Island‏ @johndotbastable Jul 8
A search for the word 'Iraq' yielded 0 results. I guess the price WAS worth it. amp.theguardian.com/books/2018/jul…
0 replies0 retweets0 likes


From the crypt to the toilet, it's THE YOUNG TURDS' Emma Vigeland trying to reason and failing horribly.

Emma Vigeland‏Verified account @EmmaVigeland 2h2 hours ago
Emma Vigeland Retweeted Donald J. Trump
The United States pulled much of Europe into two wars (Afghanistan and Iraq) with NATO. It blows my mind that he has either no memory of that or just doesn't care... or both.
Emma Vigeland added,
Donald J. TrumpVerified account @realDonaldTrump
The United States is spending far more on NATO than any other Country. This is not fair, nor is it acceptable. While these countries have been increasing their contributions since I took office, they must do much more. Germany is at 1%, the U.S. is at 4%, and NATO benefits.......
14 replies8 retweets56 likes

What an idiot.  She gives a pass to War Hawks.  That passes for 'informed analysis' on THE YOUNG TURDS.  Emma needs to go back to playing Mommy on air, that's really all she's ever done for the show, as we've pointed out before.