Sorry, but I liked SERENITY.  I just saw it last night, rented it on AMAZON.  This movie was buried by the studio that released it.  That's too bad because it's a really strong thriller.  I'd rank it with AFTER DARK MY SWEET (Rachel Ward, Jason Patric) as one of the best film noirs in color.

I can't give away the film's twist but, once you know the twist, all the elements really do make sense -- including Anne Hathaway's characterization which some critics slammed.  One saying it was like something out of WHO FRAMED ROGER RABBIT? -- but the twist, again, makes that actually a good thing.

I think it's executed well.  I wonder if some of the hatred hurled at this film was done by people who didn't watch the whole film.

Again, there's a surprise twist that really goes to why we see what we are seeing.  And if you stop watching before that, you will be misled.

Wednesday, May 8, 2019.  US Secretary of State Mike Pompeo meets some officials in Iraq, the war machine grinds on, and much more.


U. S. secretary of state Mike Pompeo scrapped a visit to Germany on Tuesday to make an unannounced trip to Iraq, pressing Iraqi leaders about what he called the increased dangers to Americans there from Iran's forces and allies.

The visit was discussed this morning on NPR's MORNING EDITION with the State Dept's Brian Hook.


Steve Inskeep: The US said the other day it's sending an aircraft carrier to the Persian Gulf region.  It may have been a routine deployment but the National Security Advisor paired that with talk about troubling indications from Iran And then Secretary of State Pompeo, your boss, went to Baghdad the neighboring country.  What's going on?

Brian Hook: We had indications of heightened Iranian readiness to conduct offensive against US forces and our interests in the Middle East.  So after we received these multiple, credible threats by Iranian regime forces forces, we repositioned our military assets accordingly.  We sent the USS Abraham Lincoln carrier strike group -- and there was a bomber just to send a clear message to the Iranian regime.  And that clear message is any attack on US interests and allies will be met with force.  We obviously are not looking for war with Iran but we are postured and ready to defend US forces and interest in that region.

The top US diplomat's unannounced visit marked an effort to stand up Washington's ties with Baghdad as it pushes ahead with its "maximum pressure" against Tehran -- a US arch-rival, but an ally of Iraq.
Pompeo abruptly cancelled talks in Germany and made a lengthy detour from a European tour to spend four hours in Iraq, where he met both President Barham Saleh and Prime Minister Adel Abdel Mahdi.
"We talked to them about the importance of Iraq ensuring that it's able to adequately protect Americans in their country," Pompeo told reporters after the meetings.

Pompeo said he made the trip because Iranian forces are "escalating their activity" and said the threat of attacks were "very specific".
"These were attacks that were imminent," Pompeo said.
He declined to provide additional details to back his claims, which have been met with scepticism in numerous quarters, with many fearing that President Donald Trump's administration is seeking to prompt war with Iran.


The press should be skeptic but the US corporate media really isn't.  They treat this all as normal.  Over at ANTIWAR.COM, Jason Ditz does the work they refuse to:


US officials were only too willing to believe this, and the mention of Iranian proxies possibly being involved immediately led to extra tension targeted at Iraq’s Shi’ite militias, which the US and Israel have both accused of being in league with Iran.

These same militias, however, are part of the Iraqi government’s own security structure. This is likely to raise concerns within Iraq, and Pompeo’s meeting with PM  Adel Abdul Mahdi doesn’t seem likely to resolve the questions.


The build up should have raised questions.  The claims being put forward should raise questions.  The lack of skepticism helped start the Iraq War and clearly the US press hasn't learned anything.


.@NegarMortazavi: "Media organizations and journalists have also learned a lesson from the Iraq war: that not all information and intelligence from the administration can be taken at face value, and should be treated with caution."
0 replies0 retweets0 likes

The first step in smashing American imperialism is radical honesty with ourselves. We don't "intervene" - we invade. That's not collateral damage" - those are the corpses of parents and children. Ours is not a Department of Defense - it's a Department of War.
9 replies142 retweets488 likes


The Secretary of State met with Iraq's prime minister Adel Abdul-Mahdi and with the ceremonial president Barham Salih.

Iraqi Prime Minister Adel Abdul Mahdi? Iraq? Iraq? Is there any way to protect US interests in Iraq when there is a war in the Gulf? 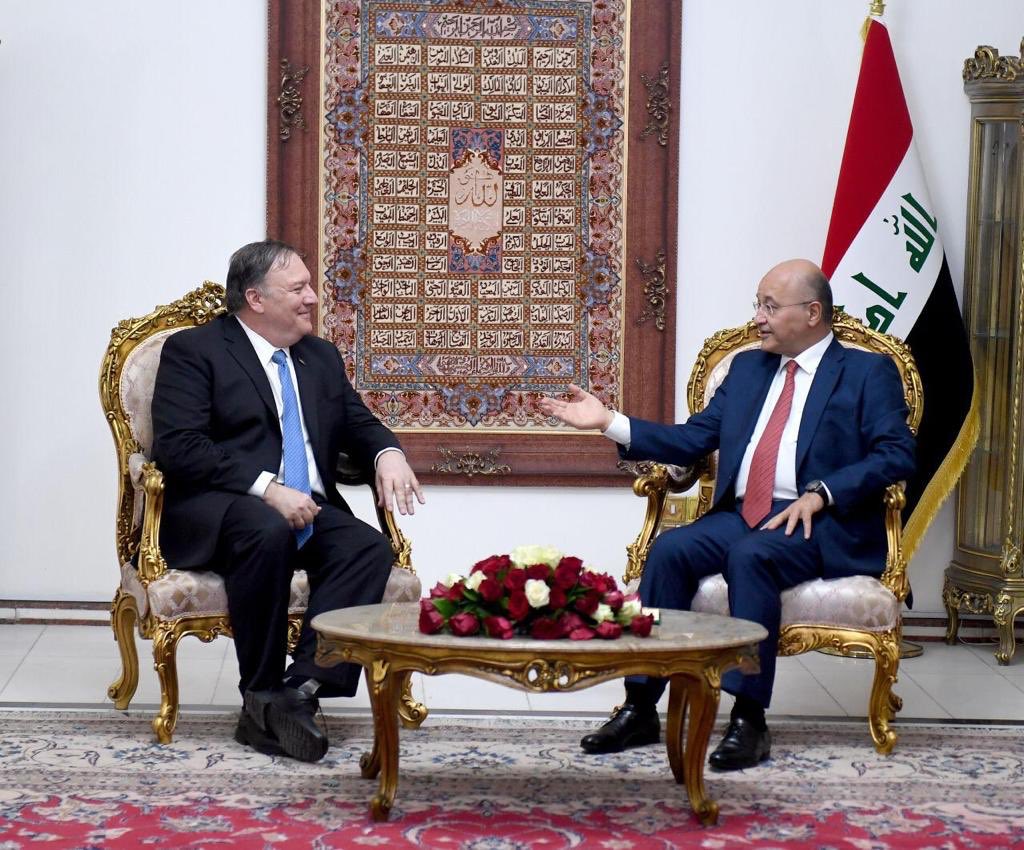 You know who the US Secretary of State didn't meet with while in Iraq?  The US Ambassador to Iraq.  Why did Pompeo avoid the ambassador?  Because there is none.  The last US Ambassador left Iraq at the end of January.  There US Senate has still not voted on the nominee -- the nominee US President Donald Trump named last November.  The Secretary of State feels that the current situation is so important that he needs to make a visit to Iraq but apparently the situation is not so important that the US Senate feels the need to vote on a nominee for an empty position that they've allowed to remain empty by dragging their feet.

Hey everybody, we are at war in 3 different countries - Iraq, Afghanistan, and Syria - and inching toward conflict in 2 more - Venezuela and Iran - AND WE HAVEN'T HAD A SECRETARY OF DEFENSE FOR FIVE MONTHS.
1,844 replies21,222 retweets55,681 likes

These forever wars are not ending.  As they continue and their costs continue, it becomes harder and harder for needs at home in the US to be met.

On MSNBC: “I’m a soldier. I’ve served over 16 years in the Army National Guard. I know first-hand the cost of war, and that is why I’m running for president.” #Tulsi2020


18 years, thousands of dead, trillions of dollars. We’re right back where we started. Our leaders have failed us. It’s time our troops in Afghanistan came home.

US House Rep Tulsi Gabbard is running for the Democratic Party's presidential nomination.  Every nominee proposing something -- be it Medicare For All or whatever -- better explain how we pay for those proposals while continuing these endless wars because you can't have both.


We need to take the trillions being spent on regime change wars, the new Cold War & arms race, & reinvest those dollars in the needs of our communities--quality healthcare for all, protecting the environment, improving education, rebuilding our crumbling infrastructure, & more.


Most Democrats running on "peaceful foreign policies" aren't trying to stop the war machine. They're trying to tweak it - more cultural centers in Jakarta to make the bombings look good. That's not enough. Foreign policy must be fundamentally redone - that is the only option.
20 replies349 retweets1,424 likes

You cannot have a social democracy at home and imperialism abroad: the current system of savage capitalism depends on a system maintained by the imperialist project. To undo one you must undo the other. A leftist domestic policy must be complemented by a leftist international one
76 replies1,461 retweets5,458 likes