So HBO MAX is making a movie about Batgirl (Barbara Gordon).

How could that go wrong?

In oh-so-many ways as anyone who saw Alicia Silverstone in BATMAN & ROBIN should well know. Alicia's career deserved to be over for that 'performance.'

First off, get in shape. You're playing a crime fighter not a the world champion pie eater. Don't want to get in shape? Don't take the part.

Second, it was no part. It was an embarrassment and a bad role and a real actress would have demanded changes or refused to take it.

Batgirl is the most famous female superhero after Wonder Woman.

Because of the TV show BATMAN. Yvonne Craig played Batgirl in season three of that sixties show which has aired nonstop over and over. This took her far beyond the comic book pages. (She was created for TV, by the way, the character.) Many of us grew up on Batgirl. We have an idea of how she should be.

If the HBO MAX tries to turn her into anything else, we won't be buying it.

A bombing in Iraq has left mass fatalities.  The target?  Moqtada al-Sadr's home base in Baghdad, Sadr City.  The slum that remains a slum because Moqtada grand stands a great deal but has done nothing to improve the quality of life of his followers.

#Iraq : Atrocity in #Baghdad - bomb in crowded market on eve of Eid in Sadr City - at least 18 people killed #بَغْدَاد 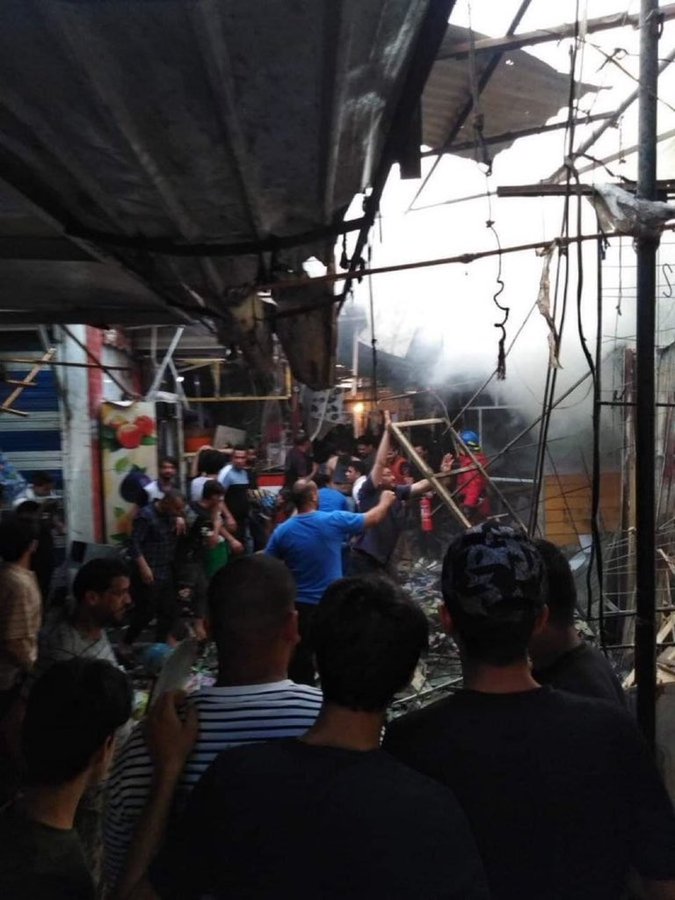 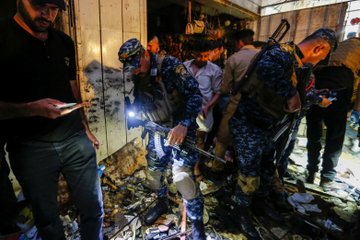 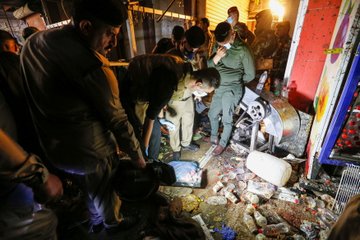 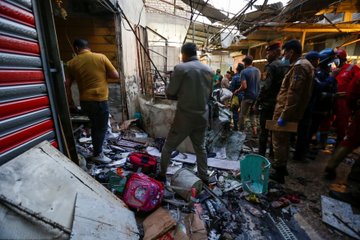 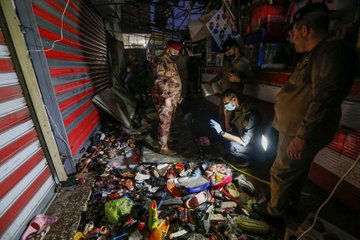 Mohammed Tawfeeq (CNN) explains, "Children and women were among the dead and wounded, according to health and security officials. The blast took place in the Wahailat outdoor market in Sadr City, a predominantly Muslim Shia neighborhood in the east of Baghdad."  BBC NEWS observes, "It was the deadliest bombing in Baghdad in six months" while REUTERS notes, "In April, the Sunni Muslim militant group Islamic State claimed responsibility for a car bomb attack on a market in Sadr City, Baghdad's main Shi'ite Muslim neighbourhood, that killed four people and wounded 20."  GULF TODAY notes a more recent bombing, "In June, 15 people were wounded when a bomb placed under a kiosk in another Sadr City market detonated. In April, at least four people were killed in a car bomb attack in Sadr City. That blast was caused by an explosive device attached to a parked car at the market."  Three major attacks in four months?   In Sadr City alone?  No, ISIS was never vanquished.  The lost territory they held but terrorists groups don't usually take over cities.  They generally hide in the shadows and wait.  Which is what ISIS is back to doing and has been for some time now.  Meanwhile, how does Moqtada go out in public right now having yet again failed to protect his followers in the section of Baghdad named after his family?

NDTV reports, "In the panic and chaos of the attack, screams of terror and anguish filled the air. When the smoke cleared, human remains lay strewn amid scattered sandals, market produce and the charred debris of stalls."

A suicide bomber killed at least 35 people and wounded dozens in a crowded market in the Sadr City neighborhood of Baghdad https://reut.rs/3BmJUHB
Suicide attack in Iraq kills at least 35 – News
6:10 AM · Jul 20, 2021

At least 35 are dead with at least sixty more left injured and the tolls on both could continue to rise.  AFP notes, "In a message posted to its Telegram channel, the militant group said a suicide bomber named Abu Hamza al-Iraqi detonated his explosive belt in the middle of a crowd in Sadr City, an eastern Baghdad suburb on Monday night, killing more than 30 and wounding 35 others."  BBC NEWS' Nafiseh Kohnavard Tweets:

IS propaganda channels have published this pic saying that this is the suicide attacker who detonated his vest yesterday in a crowded market in Baghdad’s Sadr City killing more than 35 people mainly Shia civilians. He looks so young. 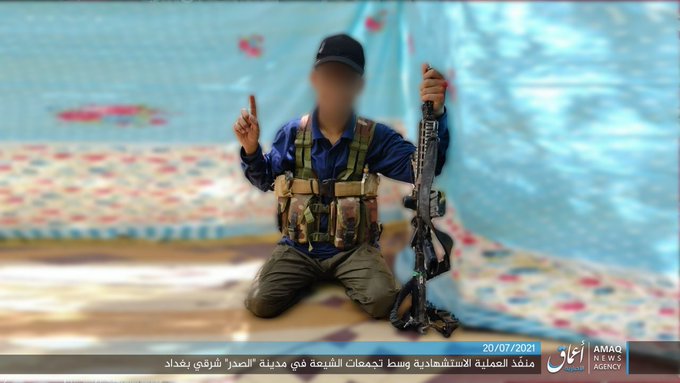 The head of the United Nations on Monday condemned a bombing in a crowded Baghdad market that killed at least 35 people and injured more than 60.

“This deadly attack ahead of the Eid al-Adha holiday is a reminder to us all that the scourge of terrorism knows no bounds,” he added.

On the topic of Moqtada al-Sadr, Mina Aldroubi (THE NATIONAL) reported two days ago:

The withdrawal of populist Iraqi cleric Moqtada Al Sadr from the country’s political process is no “surprise”, experts told The National.

Iraq has been beset by a wave of public-service disasters, the most recent of which include a hospital fire that killed 92 people and a national power cut in the blazing summer heat.

“This is not the first time and, to many, not a surprise that Moqtada Al Sadr is coming out and claiming to leave the political process,” said Renad Mansour, a senior research fellow at the Chatham House think tank in London.

“He’s done this in the past and even before elections, and it’s part of his vision of being above politics, to some extent.”

Mr Al Sadr said last week that he would boycott Iraq’s upcoming elections to distance himself from the government.

The cleric is known to be one of Iraq’s most influential religious figures, heading a political bloc in Parliament that was the biggest winner of the 2018 elections.

Sairoon has significant influence and gained 54 seats in Parliament, the most won by any party or bloc in the 329-member legislature.

In the past, Mr Sadr has withdrawn from frontline politics without dismantling his powerful movement.

He now appears to want to distance himself from publicly recognised political appointments among his Sadrist followers and remould himself as someone above the fray of day-to-day political turmoil.

But since 2019, armed groups linked to political parties backed by Iran have resisted a national protest movement, killing at least 500 people.

“This is a time where people are angry at the government, and so this is what he does,” Mr Mansour told The National.

Turning to the US, Patrick Martin (WSWS) weighs in on US President Joe Biden's leadership or 'leadership' thus far:

When Biden took office, 400,000 people were dead from the COVID-19 pandemic, while millions were unemployed. Just months earlier, every city, town, and village in America had seen protests in opposition to police violence.

Biden marked the six-month anniversary with brief remarks presenting American society in glowing terms. “For all those predictions of doom and gloom six months in, here’s where things stand,” he said. “Record growth, record job creation, workers getting hard-earned breaks.” He added, “Put simply: Our economy is on the move, and we have COVID-19 on the run.”

Summing up his prognosis, the US president proclaimed: “It turns out capitalism is alive and very well.” The truth is that the policies of the Biden administration have entirely failed to resolve the social crisis in America and they cannot, because they are based on the framework of American capitalism.

The pandemic, far from being “on the run,” is undergoing a new resurgence. Since Biden took office, an additional 225,000 people have died from the pandemic. All indications are that by the winter, with the new surge accompanying the spread of the Delta variant, the death toll under Biden will have exceeded that under Trump.

The policies of the Biden administration have been driven by the interests of Wall Street and the super-rich. This is why, despite occasional criticisms of Trump’s callous and anti-scientific response to the coronavirus pandemic, Biden has pursued the same policy of restoring corporate profit-making by forcing workers back to work and children back to school as quickly as possible, regardless of the dangers to their lives and health.