So the release schedule is as follows:

Which one are you least excited about?

I'd say either the Thor film (Thor hasn't delivered a worthy film yet) or Black Panther's new film.since it's a different  Black Panther.

Which ones are you most excited about?

For me, it's SHE-HULK.  I really want to see that film.  MS. MARVEL?  I'll give it a chance but I'd be more excited if it were Carole Danvers and not the young female who took over the title.  (Carol Danvers is better known today as Captaim Marvel.)

Wednesday, December 29, 2021.  Does Iraq's Parliament plan to ever hold their first session, Julian Assange remains persecuted, and much more.

The persecution of Julian Assange, overseen by US President Joe Biden, continues.

Julian's crime?  Journalism.  Journalism that exposed War Crimes and other serious actions.  Joe Biden is ensuring he will be one of the most vile presidents when history is written.  Jeff Mackler (LA PROGRESSIVE) observes:

Yes, the persecution and threatened life imprisonment of Julian Assange is a threat against free speech and a free press. It is also a dire warning to all those who seek to tell the truth about U.S. wars of slaughter and genocide, including the ten-year war against Iraq conducted in the name of defending the U.S. against Saddam Hussein’s non-existent “weapons of mass destruction.” The same with the U.S. war against Muammar Gaddafi’s non-existent threat to murder 50,000 people in Benghazi. These CIA and corporate media-created pretexts justified the murder of some 1.5 million Iraqis and the destruction of the infrastructures of Iraq and Libya.

Today, U.S. wars of intervention and conquest are accompanied by deadly sanction wars, Special Operation wars, drone wars, death squad assassination wars, etc., all funded by a bloated U.S. military budget that approaches the combined military expenditures of the entire rest of the world. The victims are most often the poor nations on earth who seek their right to self-determination, free from imperialist domination. Today’s U.S. deadly economic sanction wars are conducted against some 39 countries. In Venezuela alone, UN officials report a U.S. sanction death toll of 50,000. Similar horrors, including U.S. coups, embargos, blockades and U.S.-backed terror bombings perpetrated against the people of Bolivia, Cuba, Nicaragua, as well more than a dozen African nations where U.S. troops are stationed.

Indeed, the list is longer. In a June 2021 letter to the U.S. Congress, President Biden admitted all of the countries where U.S. troops are waging war against groups opposed by the United States. According to the journal Conflict Management and Peace Science, the United States has 173,000 military troops engaged in conflicts in 159 other nations!

Truthtellers like Julian Assange frighten the imperial leaders of the U.S. “national security state,” a state power that, as Edward Snowden revealed, oversees an Orwellian system of total surveillance.

The world watches as Joe Biden uses the force of the US government to persecute Julian.  And as it happens, too many people remain silent.  Frank Ball (ECHO) notes, "The silence is deafening. Where are the Australian journalists who should be afraid of the latest development in the extradition case by the USA against Julian Assange?"  And the silence goes beyond journalists in Australia.   At SALON, Chris Hedges writes:

Nils Melzer, the UN special rapporteur on torture, is one of the very few establishment figures to denounce the judicial lynching of Julian Assange. Melzer's integrity and courage, for which he has been mercilessly attacked, stand in stark contrast to the widespread complicity of many human rights and press organizations, including PEN America, which has become a de facto subsidiary of the Democratic National Committee.

Those in power, as Noam Chomsky points out, divide the world into "worthy" and "unworthy" victims. They weep crocodile tears over the plight of Uyghur Muslims persecuted in China while demonizing and slaughtering Muslims in the Middle East. They decry press censorship in hostile states and collude with the press censorship and algorithms emanating from Silicon Valley in the United States. It is an old and insidious game, one practiced not to promote human rights or press freedom but to envelop these courtiers to power in a sanctimonious and cloying self-righteousness. PEN America can't say the words "Belarus," "Myanmar" or the Chinese tennis star "Peng Shuai" fast enough, while all but ignoring the most egregious assault on press freedom in our lifetime.

PEN America only stopped accepting funding from the Israeli government — which routinely censors and jails Palestinian journalists and writers in Israel and the occupied West Bank — for the literary group's annual World Voices festival in New York in 2017 when more than 250 writers, poets and publishers, many members of PEN, signed an appeal calling on the CEO of PEN America, Suzanne Nossel, to end the organization's partnership with the Israeli government. The signatories included Wallace Shawn, Alice Walker, Eileen Myles, Louise Erdrich, Russell Banks, Cornel West, Junot Díaz and Viet Thanh Nguyen. To stand up for Assange comes with a cost, as all moral imperatives do. And this is a cost the careerists and Democratic Party apparatchiks, who leverage corporate money and corporate backing to seize and deform these organizations into appendages of the ruling class, do not intend to pay.

PEN America is typical of the establishment hijacking of an organization that was founded and once run by writers, some of whom, including Susan Sontag and Norman Mailer, I knew. Nossel is a former corporate lawyer, listed as a "contributor" to the Federalist Society, who worked for McKinsey & Company and as vice president of U.S. business development for Bertelsmann. Nossel, who has had herself elevated to the position of CEO of PEN America, also worked under Hillary Clinton in the State Department, including on the task force assigned to respond to the WikiLeaks revelations. I withdrew from a scheduled speaking event at the 2013 World Voices Festival in New York and resigned from the organization, which that same year had given me its First Amendment Award, to protest Nossel's appointment. PEN Canada offered me membership, which I accepted.

Nossel and PEN America have stated that the prosecution of Assange raises "grave concerns" about press freedom and lauded the decision by a British court in January 2012 not to extradite Assange. Should Nossel and PEN America have not taken this stance on Assange, it would have left them in opposition to most PEN organizations around the world. PEN Centre Germany, for example, made Assange an honorary member. PEN International has called for all charges to be dropped against Assange.

But Nossel, at the same time, repeats every slanderous trope and lie used to discredit the WikiLeaks publisher who now faces extradition to the United States to potentially serve a 175-year sentence under the Espionage Act. She refuses to acknowledge that Assange is being persecuted because he carried out the most basic and important role of any publisher, making public documents that expose the multitudinous crimes and lies of empire. And I have not seen any direct appeals to the Biden administration on Assange's behalf from PEN America.

"Whether Assange is a journalist or WikiLeaks qualifies as a press outlet is immaterial to the counts set out here," Nossel has said. But as a lawyer who was a member of the State Department task force that responded to the WikiLeaks revelations, she understands it is not immaterial. The core argument behind the U.S. effort to extradite Assange revolves around denying him the status of a publisher or a journalist and denying WikiLeaks the status of a press publication. Nossel parrots the litany of false charges leveled against Assange, including that he endangered lives by not redacting documents, hacked into a government computer and meddled in the 2016 elections, all key points in the government's case against Assange. PEN America, under her direction, has sent out news briefs with headlines such as: "Security Reports Reveal How Assange Turned an Embassy into a Command Post for Election Meddling." The end result is that PEN America is helping to uncoil the rope to string up the WikiLeaks publisher, a gross betrayal of the core mission of PEN.

The US government plotted to assassinate Julian.  Even that reality doesn't seem to engage some people.  MRT notes:

In September, Yahoo News reported, citing dozens of unnamed former US government officials, that ex-CIA boss Mike Pompeo had planned to kidnap Wikileaks founder Julian Assange from his refuge in the Ecuadorian embassy in London and possibly even kill him in 2017. There is a lot of truth in the explosive story, said Andy Müller-Maguhn, former spokesman for the Chaos Computer Club (CCC), on Tuesday at the remote Chaos Communication Congress (rC3). Individual parts of the report at the time, including an imminent escape of Assange with the help of Russia, were not correct.

The famous embassy resident should have been declared an Ecuadorian diplomat around Christmas 2017 in order to grant him freedom of travel and immunity, reported Müller-Maguhn. The US knew about the plan in detail and wanted to thwart it. A silver-gray Ford Focus as an undercover police vehicle and a van stood in front of the embassy for days.

Turning to Iraq, this is from last night's THE NEWSHOUR (PBS):

Press declared 'king maker' Moqtada has had weeks and weeks to get it together.  Unable to do so in the past and still unable.  Farhad Alaaldin Tweets:

The Sadrist Leader
@Mu_AlSadr
hosted some of the leaders of the Coordination Framework leaders in #Najaf No photos of the meeting were published, but a simple tweet by alSdir summarises the content Clearly no agreement was reached and both sides remain on their own path #Iraq 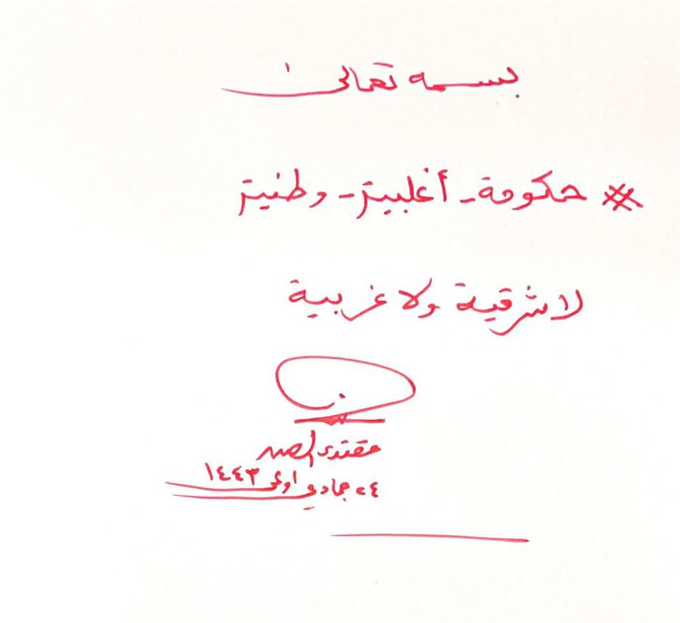 Is Moqtada's failure thus far why Parliament has yet to convene?

The election is certified.  Parliament is supposed to hold its first session now.  Among other things, the Parliament is required to name someone prime minister-designate in that first meeting.

And, per the Constitution, a timetable attaches from that moment, the designate has 30 days to form a Cabinet or Parliament names a new prime minister-designate.  This won't be Moqtada.  He's not going for the post of prime minister.

The election was October 10th.  At the end of this week, we'll be in January.  The foot dragging needs to stop.

With the Federal Supreme Court’s ratification of the disputed election results, the leader of the Sadrist movement, Muqtada al-Sadr, now has to reckon with the need to strike deals with various political blocs in order to form the cabinet and run the government.

To start with, he will have to quickly flesh out his ideas on the priorities of the new government and how it should work, now that he leads the largest bloc in the parliament. That bloc must build the required parliamentary alliances which will underlie the formation of the government.

Iraqi political sources say that the leader of the Sadrist movement will face a real challenge with such alliances. They wonder if Sadr will be able to win the support of the Sunni, Kurdish and independent blocs without making the necessary concessions to achieve that goal. Another question, given his opposition to the quota system, will be if he is prepared to share portfolios with other blocs to satisfy supportive MPs.

These sources said that it is not possible to talk about “forming a national majority government,” as advocated by Sadr, without providing sufficient guarantees to the parliamentarians who would be willing to back it. The most important guarantee would be ministerial portfolios for their blocs as well as positions and dividends for the parliamentarians themselves and their supporters. The sources say that speaking of a national majority government is just loose talk as long as Sadr and his bloc's representatives do not sit with representatives of the various other blocs and convince them to support the government. Without such meetings, he could lose everyone's support.