Let's kick the work week off withIsaiah's THE WORLD TODAY JUST NUTS "We Feed Them" which went up Saturday night. 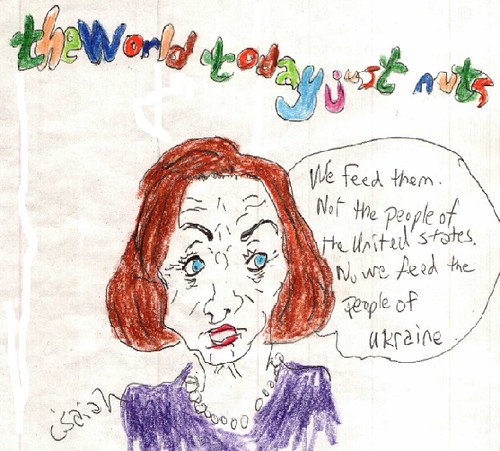 Now via THENUMBERS.COM, this is the weekend take:

Good for THE BATMAN, UNCHARTED, DOG and DEATH ON THE NILE which continue to have legs.  Wonder if the pandemic was over, would the legs collapse?

I am especially glad that dog has passed $54 million.  It's a great movie.  And DEATH ON THE NILE keeps floating along with $1.6 million bringing it to $43 million.

Of all the movies above, I do believe that DOG has the best word of mouth.

Over the weekend, the Iraq War hit the 19th mark, 19 years and still going.   Will US troops ever leave Iraq?  At this rate, no. And we know how the corporate media in the US did their part to start the illegal war and to keep it going.  We address that fact constatly.  We've also noted, over the years, how Pandhandle Media -- the beggar media -- send money, send money -- also keeps the illegal war going.  This anniversary?
Silence from the beggar media for the most part.
To be clear, when we don't get silence from them on Iraq, we don't get much of anything.  They do af, "It's 19 years old" statement and then rush to offer what everone knew back when Bully Boy Bush occupied the White House.  Nothing as recent as two years prior is ever offered because they don't pay attention to Iraq.  They can show up to do their useless segments and writing that would be the same if they wrote it ten years ago but they can't talk about Iraq today -- the political stalemate, the protests (more and more over rising costs), the large number of women being murdered (Juare is apparently the furthest US 'feminists' will allow their minds to wonder when women are being targeted), etc.
Enter JACOBIN and  Saif Ansari -- the latter of whom bill shimself as "Philosopher, lawyer and writer. Indian American/Muslim atheist."  SOmeone break it to the idiot that Muslim isn't a race, it's a religion so, if you bill yourself as an aehist, you're not a Mulsim.  Basics are hard for Saif as he makes clear when writing about Iraq for Jacobin -- a place he doesn't normally cover but apparently someone at JACOBIN felt that the piece was needed and theyf armed it out to Saif  as one of the non-White guys they actually have working at JACOBIN.  Isn't that just another form of colinialism?
At any rate, Saif starts out his piece slamming US President Joe Biden which is more than fair.  Joe is president and the war continues under his watch.  Joe supported the war in the US Senate.  And then, the whole thing quickly falls apart.  The first section with huge pro lems:

And yet not even during the heated final debate of the primaries in 2020 did Bernie Sanders (who had voted against the invasion in 2002 as a representative of Vermont) make the case — which he had alluded to on the campaign trail more than once — that Biden was unfit to serve as president because of what was, in Sanders’s view, “the worst foreign policy blunder in the modern history of the United States.”

Elizabeth Warren, another candidate who had called the Iraq War a mistake, also failed to challenge Biden’s historical defense of the invasion — from denying that he had ever believed Hussein possessed WMDs to lamenting that the only mistake he had made was to trust the Bush administration. When asked whether Biden was to blame, Warren — a legal academic who had begun her political career taking on the president over the 2005 bankruptcy bill — demurred.

In fact, the most strenuous criticism against Biden’s role in the Iraq War was leveled in March 2020 by an air force veteran who accused Biden of having the blood of fellow service members on his hands. But despite his overtures that he had come to regret his support for the war — which became increasingly unpopular in the upper echelons of the Democratic Party in subsequent years — Biden never learned from his mistake.

Eleven years after the intervention in Libya’s [. . .]

Tulsi Gabbard?  Isn't that the name that belongs in the above?  Yes, it is.  Caling Tulsi out for fake assery isn't a popular move.  We don't worry about popularity here.  We worry about the truth.  SO we won't just be Abby Martin saying her name on a JaACOBIN podcast and then laughing.  No, we'll actually go there as we did in real time.  In the final debate that candidate Tulsi made the stage for, we were all expecting the big showdown.  This was anti-war Tulsi.  She'd played that anti-war arm chair zealot over and over.  And the war, she'd tell voters over and over, was her biggest issue.  It effected everything -- including how much money we had to spend on other issues -- needed issues.

Bill de Blasio and others had confronted Joe during the debqtes of the candidates for the Democratic Party's presidential nomination.  Tulsi hadn't.  And she had an excuse, she wasn't on the stage with him.  The field was so crowded back then that they had to divide them up into groups.

So she'd go on MSNBC, for example, on June 26, 2019 and slam Joe for his actions regarding  Iraq but she wasn't on stage with him.