Back at the last Cannes, Woody Allen revealed to Deadline that the deal he made to create a TV series for Amazon was haunting his every step. He’s in a much better place now. In fact, Allen has set the principal cast for the six half-hour-episode series that will take place in the 1960s, and it certainly is unexpected.

I hope this series will air this year.

But one of the cast will be Elaine May.

And who doesn't love Elaine May?

Every moment she's on the screen in SMALL TIME CROOKS is classic comedy.

January 25, 2016.  Chaos and violence continue, the White House plans to send more US troops to Iraq, the US bombing of Iraq continues, and much more.

And Barack Obama's 'strategy' is not working.

Which is why he's calling for even more of the same: More US troops in Iraq.

And even more US troops are being considered for Iraq.

The US Defense Dept noted over the weekend:


The United States potentially will make recommendations to position U.S. troops with Iraqi security forces in northern Iraq to support the next phase of isolating the key city of Mosul, the chairman of the Joint Chiefs of Staff said.
Marine Corps Gen. Joseph F. Dunford Jr., who met here with his French counterpart for talks focusing on the multinational effort against the Islamic State of Iraq and the Levant, told reporters traveling with him that the U.S. troops would be placed where they can best support the Iraqi forces in the fight.
"We're about winning. ... We want to have the Iraqis win," he said.

The details are still being worked out, noted Dunford, who said he will make the recommendations to President Barack Obama based on what U.S. commanders and Iraqi security forces identify as the type of support the United States can provide in a plan to retake Mosul.

Defense Secretary Ashton Carter has again addressed the controversial issue of U.S. "boots on the ground" in Iraq and Syria, saying that more American troops would be deployed in an "enabling" role.
"Boots on the ground? We have 3,500 boots on the ground" in Iraq and "we're looking for opportunities to do more," Carter told CNN's Fareed Zakaria in an interview last week at the World Economic Forum in Davos, Switzerland.
Carter acknowledged there are about 50 U.S. Special Forces troops serving as advisers in Syria to local forces opposed to the regime of Syrian President Bashar al-Assad, in addition to the 3,500-3,600 American troops serving as trainers and advisors to the Iraqi Security Forces.

Turning to the issue of the missing Americans in Iraq . . .


Two Sundays ago, Mohammed Tawfeeq (CNN) broke the news that 3 Americans were missing in Iraq. Then  CBS NEWS and AP reported, "A group of Americans who went missing over the weekend in Iraq were kidnapped from their interpreter's home in Baghdad, according to an Iraqi government intelligence official."  Susannah George (AP) reported Thursday morning that "two powerful Shiite militias are top suspects" in the kidnapping:  Asaib Ahl al-Haq and Saraya al-Salam -- both linked to Iran.

Yesterday, right wingers Max Boot and Michael Pregent took to THE WASHINGTON POST to accuse Barack of underplaying the kidnapping of the three Americans:


On Jan. 16, a group of militants driving SUVs and wearing military uniforms kidnapped three Americans in Baghdad. At least two of the men were apparently working as trainers for the Counter Terrorism Service, Iraq’s elite special operations unit, which is not only the most effective part of its military (it led the recent assault on Ramadi) but also virtually the only part of it not infiltrated by Shiite militias. Various media outlets are reporting that the Americans were taken to Sadr City, a Shiite stronghold, and that AAH is most likely responsible, possibly in coordination with another Iranian-backed militia, Saraya al-Salam.
AAH is a wholly owned subsidiary of Iran’s Quds Force. It is inconceivable that it could kidnap and hold Americans — a course of action with significant international repercussions — without at least the acquiescence, and probably the active support, of Tehran. Yet the Obama administration is doing all it can to obfuscate that reality. Reuters cited “U.S. government sources” in reporting that “Washington had no reason to believe Tehran was involved in the kidnapping and did not believe the trio were being held in Iran, which borders Iraq.”

The prime minister of Iraq had no public statement when the Americans disappeared.  He only found his voice after people began linking the kidnappers to Iran.

Haider then rushed in to insist that Iran was innocent and that maybe the three Americans weren't even kidnapped.


The suspected kidnappings in Iraq serve as a fresh test for the White House’s efforts to strengthen its ties with Tehran in the wake of the recent prisoner swap—in which five U.S. citizens were freed from Iranian captivity in exchange for the release of seven Iranian nationals held by the U.S.—and July’s landmark nuclear agreement, current and former U.S. officials said.
The Obama administration is seeking to build Tehran into a partner in combating Islamic State, and in ending wars in Syria and Yemen, but has been receiving conflicting signals from Iran’s theocratic leaders and military.
Mr. Kerry and other Obama administration officials have said there are no indications Iran played a role in abducting the Americans. They also haven’t ruled out the possibility that the disappearances resulted from criminal activity common in Baghdad. But they have said Tehran may be able to use its influence with the Iraqi militias to gain the Americans’ release.

“I asked him [Zarif]…if Iran knew any way to provide help or there were some ways they could have an impact on getting the right kind of outcome,” Mr. Kerry said after his meeting with the Iranian diplomat in Davos. “I asked him to give us that input.”

This morning, RT Tweets the following development in Iraq:


Well that is good to know.  It's an oil rich state and the oil brings in billions each year, so it's good to know the US-propped up government of Iraq is finally self-sufficient.


And then there's this: 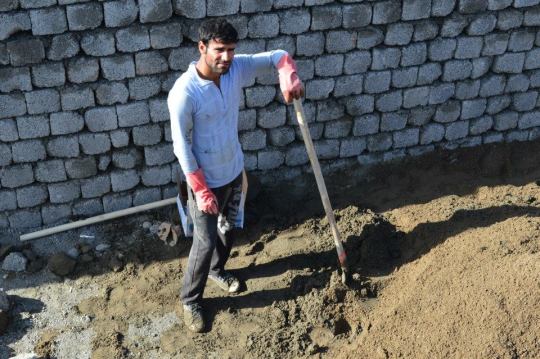 
And then there's this:

The Iraqi government is claiming record highs in oil pumped in central and southern Iraq for the month of December.  Where are the billions?

When protesters took to the street, US-installed prime minister Haider al-Abadi insisted he would end corruption.

And one of the richest countries in the world continues to fail at providing for its people because the corrupt officials continue to steal the money.


Where has the money gone?


And remember the failure to pay the Kurdistan Regional Government its shares of the federal monies?


Where has the money gone?

At NPR, Alice Fordham offers a shallow 'analysis' which includes:


In 2014 Iraq lost a lot of its territory to ISIS and had to start fighting back and looking after millions of civilians driven from their homes in the north and the west of the country.

At the same time, oil prices started to fall. Oil is now going for around $30 a barrel, down from about $100 when the prices began to crash in the summer of 2014.
Basically, all Iraq's government income comes from oil.

To help pay for the war, the U.S. has offered loans to cover defense equipment, but it doesn't cover salaries — either for soldiers or for the millions of Iraqis on the government payroll for jobs or pensions.

About 4.5 million workers are on the government payroll, with 3.7 million more receiving pensions. And people have come to expect other benefits like food rations and cheap gas.


Fordham never notes the annual oil revenues, the refusal of the central government in Baghdad to pay the KRG its share of federal revenues, etc.