TOMB RAIDER came in second place in its debut weekend.

The best thing about the film is Dominic West.

But I should note that the film also has a strong female character.  That character is played by Kristin Scott Thomas.  Sadly, the actress playing adult Lara is pretty awful.  Alicia Vikander is 29 and looks it but, for some reason, she acts 15.  And she's useless.

Lara's an action figure in the video games and in the Angelina Jolie films.  Here she just sits around and watches.  In fact, if they make an action figure of her, it should come with a lawn chair so that she can sit and watch.

Vikander is so bad that the film actually improves in the second half because the director and the screenwriter lose interest in Lara and the movie becomes MATHIAS VOGEL WILL DO ANYTHING.  Mathias is played by Walton Goggins and he's also an archaeologist.  But he's more fun than Lara.  It's at this point of the movie that Dominic West's Lord Richard Croft dies and you never believe Alicia Vikander's Lara gives a damn.  Oh, she squinches up her face and approximates tears.  But nothing she does is believable.

Angelina Jolie made the character real and believable in two films.  She was also central to each film.

Vikander's forgettable and you can't blame the director for focusing on other characters.


Jolie scored $48 million her opening weekend as Lara.  Vikander scored $22 million.  Getting an idea of just how weak and hideous Vikander is.  Jolie was 26 when her film came out and Vikander's 29.

Angelina Jolie made Lara real and interesting.  Vikander just makes her boring.  This is one of the worst films of a year that's just started.


The Iraq War hits the 15th year anniversary in a matter of days and the ongoing war was brought to the world by so many -- most of whom have never faced any real accountability.  Take US Senator Dianne Feinstein.  From the state of California, she voted to support the war.  Opposing the war was no problem in California.  Barbara Boxer, for instance, was also in the Senate at the time and she voted against the Iraq War.

Her vote is not forgotten.  For example, in October 2017 this letter was published by THE LOS ANGELES TIMES:


To the editor: Feinstein has made a highlight-free Senate career out of the feckless "third way" triangulation that treats bipartisanship as though it were an end in and of itself.
She lost my vote in 2002 when she voted for the Iraq War. Now, she says we should give the race-baiter-in-chief a chance. What brave, bipartisan sentiment.
California has now wasted 25 years of precious Senate representation on someone who thinks the best outcome is the precise midpoint between right and wrong. Feinstein needs to retire, but since she refuses to do what's best for her constituents, I'll be casting a vote to send her packing.
Branden Frankel, Encino


Feinstein has remained in office all this time because she's never had a serious challenger.  Now she does: Democrat Kevin de Leon who is currently the leader in the California state senate.  The primary is in June and Dianne will likely be on the general ballot in November.  But this is California and our state doesn't operate like every other state.  The June primary?  The top two vote getters -- regardless of party i.d. -- will be on the November ballot.  If the primary were held today, the top two would probably be Kevin de Leon and Dianne Feinstein.

Then de León launched into a list of policies he would never vote for, obliquely highlighting some of the most controversial moments of Feinstein’s tenure in the Senate: supporting school vouchers in Washington D.C., authorizing the Iraq War, and voting for a law that allows intelligence agencies to sweep up Americans’ communications without a warrant as they are spying on foreign nationals. De León also criticized Feinstein for using young undocumented immigrants as “bargaining chips” with Trump.
“I’m running because California’s greatness comes from acts of human audacity, not congressional seniority,” he said. “Who do you trust to have the courage of your convictions?”


While he was talking about how we move forward, the state was reminded last night of how Dianne Feinstein is our past and not a pleasant past at all.

Dianne stood for -- and continues to stand for -- the Iraq War.

.@CJTFOIR mourns the loss of @coalition personnel in yesterday's helicopter crash in western Iraq. Our thoughts are with the families, friends, and fellow service members of our fallen troopers. 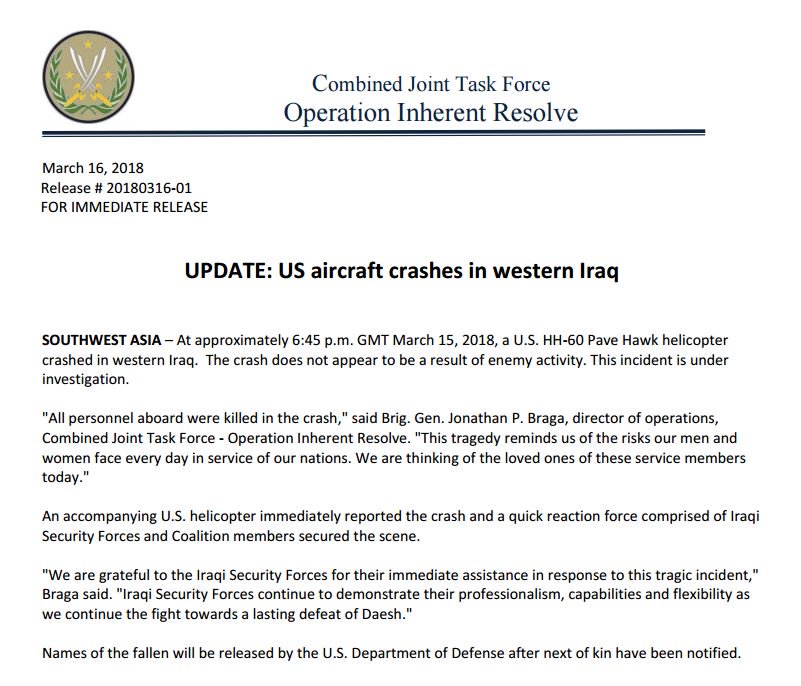 #BREAKING All 7 troops onboard a U.S. military helicopter died when their helicopter crashed near the Iraq-Syria border on Thursday evening
4 replies13 retweets7 likes

CNN International‏Verified account @cnni 40m40 minutes ago
JUST IN: All 7 US military members on board a helicopter that crashed Thursday in western Iraq near the Syrian border were killed, a US military official says cnn.it/2FE93UU
1:22
6,084 views
14 replies66 retweets41 likes

Again, thanks Dianne Feinstein.  You made your choices.  Your choices came with consequences.  Others have paid for their choices, it's time Dianne did as well.


Tomorrow, THE DAYTONA BEACH NEWS-JOURNAL will run their count of the US service members killed in Iraq and Afghanistan.  It's one of the few US outlets that regularly notes the US dead in these wars.  Their count should be 4542.  The seven who've died from the helicopter crash will bring the total number of US service members who've died in Iraq since the 2003 invasion to 4542.

Let's do some more figures because the US media ignores those killed in Iraq -- the Iraqi civilians and the US service members.

Along with the seven from last night's crash, two had already passed in Iraq: Sgt Christina Marie Schoenecker and Spc Javion S. Sullivan.


Melanie's "Till They All Get Home" (first appears on her album CRAZY LOVE):

Sridhar ramchandran‏ @Sridharramchan3 40m40 minutes ago
Pray that the souls of the 7 U.S. servicemen who passed away in western Iraq RIP and their families and units have the strength to cope.
0 replies0 retweets0 likes


Senator Dianne Feinstein turns 85 this year (June 22nd).  She's gotten to live a long life.  How sad that her actions have ensured that so many others did not have that same opportunity.  She's supported this war -- this ongoing war -- since 2002.


Time should be up for Dianne when it comes to serving in the Senate.  She should be sent packing.