Amy Schumer's movie career is grinding to a halt


Amy Schumer is a stand up comedian that a number of people used to find funny.  They also used to watch her Comedy Central TV show.

Then she decided she wanted to be a movie star.

And then she wanted to be political.

And America just got tired of her.

If you doubt that, check out the box office.

She's starred in three films and each film has opened lower and lower.

TRAINWRECK opened in the US with $30.1 million.  Then came SNATCHED with $19.5 million. Last weekend it was I FEEL PRETTY (see my review "I FEEL PRETTY left me feeling bored") with $16 million.

Each movie opens lower and only TRAINWRECK squeaked past $100 million.

They don't want to see her.

She's way too political or, really, partisan.  Her hateful Tweets have run people off.  Her constant griping and whining.

And it is partisan.

No one was bothered when she was addressing feminist issues.  No one held that against her.

But when she -- like so many others -- decided she was the self-appointed mascot for the Democratic Party and she went around insulting everyone, America got tired of her.  She comes off like a know it all who just attacks people over and over.  Kind of like Alyssa Milano and she's not working anymore either.

Amy's destroyed her own career.

She's 36 so her future's over.  She needed to become a star in films quickly.  She didn't.  She's now aged out of it.  It probably also has something to do with her features which are not pretty.  She's not sexy and -- male or female -- few become stars if they aren't seen as f**kable.

Melissa McCarthy is pretty and -- heavy or the slimmer version lately -- she is sexy.

Amy's about as sexy as Bob Hope in a road picture with Bing Crosby.  It's over for her.
"Iraq snapshot" (THE COMMON ILLS):

Monday, April 23, 2018.  19 days until Iraq is scheduled to hold elections and so many problems remain.


In a report RT has filed this morning, they note check points in Iraq.


RT CORRESPONDENT:  As a fairly regular fixture of life in Iraq, you learn fairly quickly to get used to the fact that you end up spending most of your day stuck in a car.  Part of the reason for this is the checkpoints.  They are all over Iraq.  In fact, if you pan the camera right now, we are approaching one right now.  Now these security officers are checking for suspicious people, perhaps car bombs.  They're supposed to be making Iraq safer but attacks continue despite the checks.  Now it looks like the officers want to check us.

RT CORRESPONDENT:  Thank you.  So it looks like we've been allowed to pass through.  Despite this routine search.  Thankfully, we didn't get detained for too long.  Iraqis do find these to be frustrating but at the end of the day it's probably better than facing another suicide bomb attack.

These checkpoints serve another purpose every four years -- preventing people from voting.  Those who've left their homes due to sectarian tensions and other security issues will be told at their closest polling center that their ID cards must be used at their own polling station.  The checkpoints will prevent a number of people from voting -- as happens each election cycle though it remains the most ignored story when it comes to the western press.


They're not the only ones noting the campaign posters.  Adnan Hussein (AL-ARABYIA) explains:

What is also terrifying is that the light in the end of the tunnel seems dim and very pale. This is what we can tell from the photos showing the campaign posters for candidates for the upcoming elections. These posters have filled the country’s streets and squares.
There are dozens and perhaps hundreds of candidates, especially on the lists of influential parties, blocs and coalitions, who are corrupt par excellence. The problem is that these people’s victory is guaranteed thanks to the “haram” earnings they, along with their parties and blocs, made from looting annual budgets or other sources and thanks to the political support they have from the leaders of these parties and blocs!
How do we fight corruption when we open the doors of the most important and supreme authority in the state for the corrupt?


On the issue of corruption, many may turn to the words of Grand Ayatollah Ali al-Sistani.  Ali Mamouri (AL MONITOR) reports:


During the April 13 Friday sermon, the representative of Grand Ayatollah Ali al-Sistani, Ahmed al-Safi, reiterated how the Shiite religious establishment in Najaf insists that politicians who have previously failed to live up to executive or legislative responsibility not be elected.
Safi warned against voting for those who have not provided any services to the people, saying, "Don't vote for those you voted for before and who failed.” He stressed the importance of choosing individuals who have the ability to “swiftly respond” and solve problems.
Sistani's representatives took to explaining his opinion, calling on voters to be careful and spare Iraq the dangers of choosing an ineffective parliament and government.
Rashid al-Husseini, a high-ranking cleric close to Sistani, told Al-Furat TV on April 14, “The corrupt people we have voted for have robbed the nation. We ought to not vote for them again, even if they are members of our clan or sect.”
Husseini said, “I would rather trust a faithful Christian than a corrupt Shiite. A person who does not pray and fast but can be trusted with the money of the people and the nation is deserving of my vote. Even if a person prays and fasts, I can never vote for them if they steal.”


May 12th, elections are supposed to take place in Iraq.  Ali Jawad (ANADOLU AGENCY) notes, "A total of 24 million Iraqis are eligible to cast their ballots to elect members of parliament, who will in turn elect the Iraqi president and prime minister."  RUDAW adds, "Around 7,000 candidates have registered to stand in the May 12 poll, with 329 parliamentary seats up for grabs."  AFP explains that the nearly 7,000 candidates includes 2014 women.   RUDAW also notes that 60 Christian candidates are competing for the five allotted minority seats.  The chief issues?  Mustapha Karkouti (GULF NEWS) identifies them as follows, "Like in previous elections, the main concerns of ordinary Iraqis continue to be the lack of security and the rampant corruption."

As noted in the April 3rd snapshot, pollster Dr. Munqith Dagher has utilized data on likely voters and predicts that Hayder al-Abadi's Al-Nasr will win 72 seats in the Parliament, al-Fath (the militias) will get 37 seats, Sa'eroon (Moqtada al-Sadr's new grouping) will get 27 seats, Nouri al-Maliki's State of Law will get 19 seats, al-Salam will get 18 seats (KDP and PUK parties for the Kurds), Ayad Allawi's Wataniya will get 15 seats. There are others but Dagher did not predict double digits for any of the other seats. The number are similar for the group of those who are extremely likely to vote (Hayder's seats would jump from 72 to 79 seats).  Other predictions?  The Middle East Insstitute's Fanar Haddad insists to Sammy Ketz (AFP) that the post of prime minister will come down to one of three people: Hayder al-Abadi (current prime minister), Nouri al-Maliki (two time prime minister and forever thug) or Hadi al-Ameria "a leader of Hashed al-Shaabi, a paramilitary network that played a pivotal role in defeating IS. Ameri comes from Diyala province and is a statistics graduate from Baghdad University. He fled to Iran in 1980 after Saddam executed top Shiite cleric Ayatollah Mohammed Baqr al-Sadr. The 64-year old is widely viewed as Tehran's favoured candidate."


In the KRG, the three dominant parties are the Barazani's KDP (primary party), Goran (emerged as the second most popular political party in the 2014 elections) and the Talabani's PUK (which went from one of the two main parties to a distant third).  In terms of predictions for the Kurdistan Region?

Sources shows that,#KDP will maintain its top position of the #Kurdish parties in the upcoming #elections, whereas, the competition will remain between the #National Union ,the #Change and #Alliance for Justice and Democracy.
#Sulaymaniyah will be the center of this competition.

Goran is expected to do well; however, it is under attack.  Most recently . . . 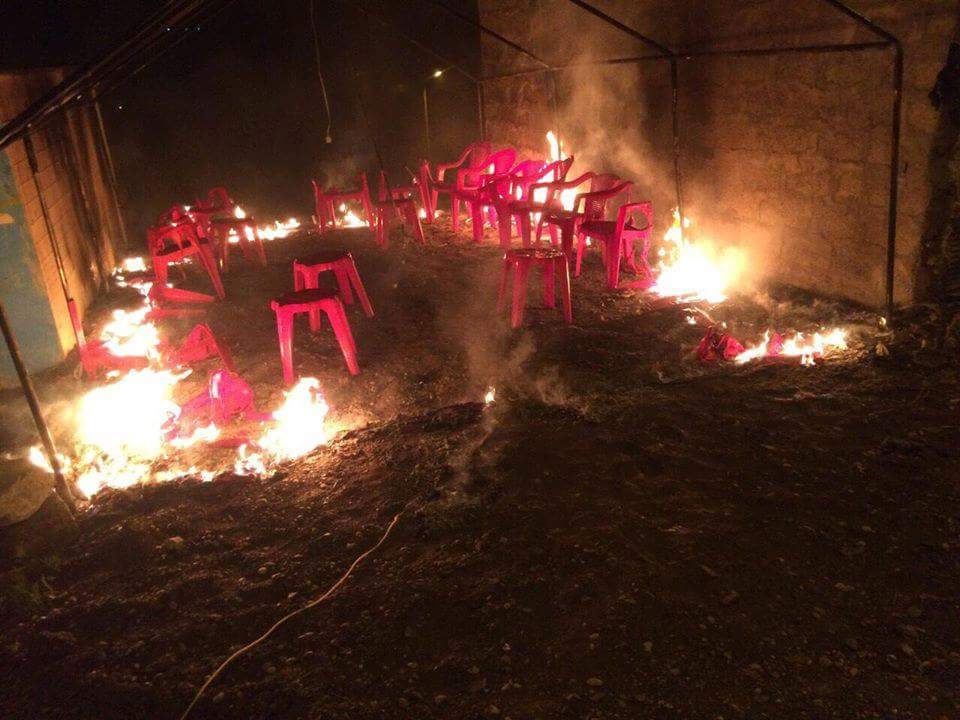 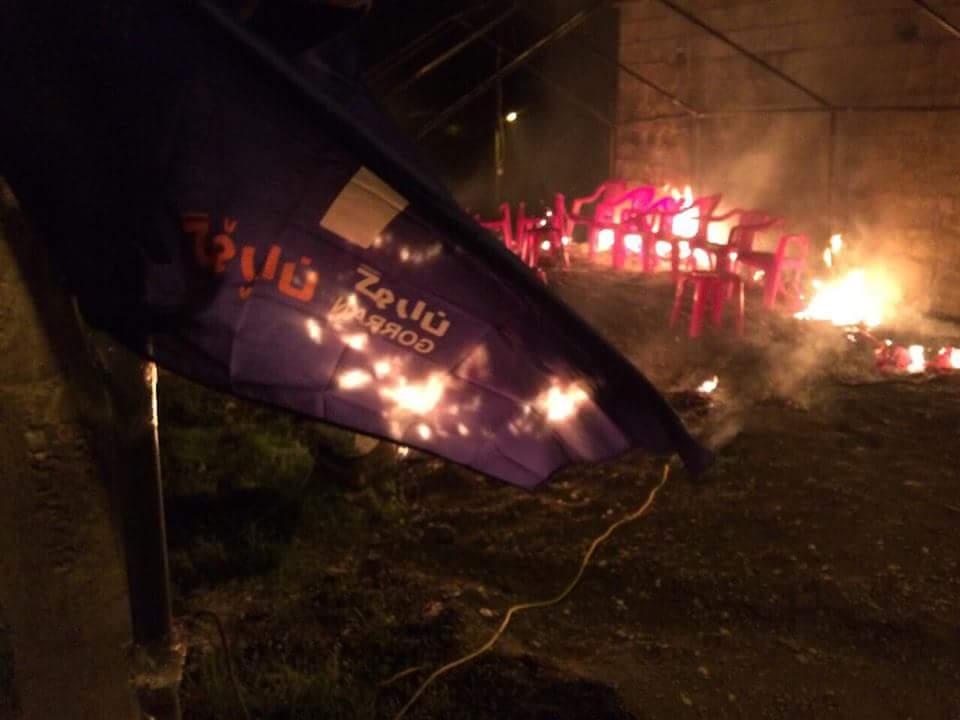 The PUK is facing its own problems -- mainly internal.   RUDAW reported this weekend that Ala Talabani is running as part of the Baghdad Coalition -- a national entity -- and that she is no longer part of any political party.  The niece of former president Jalal Talabani states that PUK leaders -- including family member Hero Ibrahim Ahmed (her aunt) that she was no longer part of the PUK.  The falling out came when she backed removing Hoshyar Zebari as the Minister of Foreign Affairs following the discovery of his corruption and the vote in Parliament to remove him.  RUDAW notes:

Talabani said in her video message that PUK leaders tried to expel her from the party’s leadership but failed to get enough votes, at which point they made the decision to freeze her out. She added that she has asked the party to explain why they want her out, but has not yet been given an answer. This is the latest defection from the beleaguered PUK. Former second deputy leader Barham Salih is expected give the party some strong competition with his newly-formed Coalition for Democracy and Justice (CDJ).

Away from the predictions there is the reality that national reconciliation is still needed in Iraq.  Erika Solomon (FINANCIAL TIMES OF LONDON) reports:


Healing Iraq’s society, fractured by thousands of deaths and devastating destruction, is one of the toughest challenges facing Iraq when the next government takes office after May elections. Reconciliation is crucial to ensuring the return of some 2.2m people displaced by the conflict, including thousands with family ties to the militants. Yet in Yathrib, as elsewhere, locals often try to block the return of families related to militants. Aid groups and western powers all acknowledge the importance of suturing Iraq’s divisions, but few are willing to co-ordinate with Baghdad on the problem. They worry that some of the government’s methods — like walling suspected Isis relatives in displacement camps, while forcing other families to return home before they feel safe — violate international law, and are a recipe for another round of radicalisation. That leaves much of the work to civil society groups, tribes and politicians with competing interests. “This is urgent,” one diplomat says. “And watching the groups trying to help can feel like watching people rearrange deck chairs on the Titanic.”