She's not funny in them.

Was she ever really funny?

It's so hard to remember.

Like too many idiots in the entertainment world who need our money to have careers, she thought she could insult Americans and that we really needed her political take.

Along the way, she lied that she was being taken down for her politics and we lost our NETFLIX star system.  Now we're left with thumbs up or down.  We can't rate a film as something we love five stars because Liar Amy insisted our reviews were about her politics and not about her great humor.

She seemed to not realize that she wasn't funny.

She destroyed Goldie Hawn's return to film (SNATCHED) with both her offscreen behavior and her lousy acting.  For that alone, Amy should be run out of town.

Now she's made I FEEL PRETTY and it's not funny.  It's like a really bad and lame TV movie.  The acting is awful.  That includes Michelle Williams who was so funny in DICK but now thinks doing a squeaky voice alone qualifies as creating a character.


This bad experience does not make a film.  It's like Ricki Lakes' BABY CAKES TV movie without the charm.

In this outing, Amy plays a fat girl that people make fun of.  She then has a mishap in the gym, comes to and thinks she's the ideal beauty.  This confidence leads her to vanity and a very ugly boyfriend. It's amazing the self-loathing Schumer has.  She has no starred in three films and not had an attractive boyfriend in any of them.  Mae West made sure that she had good looking men for her characters.  But Amy has always believed the fat girl can't get a good looking boyfriend.

Which makes her supposedly selling no-body shaming in a film such a joke.

Ricki Lake, when she starred in a film for a major studio, MRS. WINTERBOURNE, had a still hot Brendan Fraser.  Not Amy who believes fatty has to settle -- in film after film.

Maybe instead of starring in 'message' films, Schumer should work on her own self-image?

As the film makes clear, she's wasting her time as an actress, possibly she could become a motivational coach?

She needs to do something fast.  Her film career is not panning out at the box office and it's just one mistake after another.

Last week, the Speaker of Iraq’s parliament, Salim al-Jibouri announced that the last session of the current parliament would take place on April 30. This is despite the fact that the session should by rights, continue until June 30. However politicians in Iraq have already failed to attend sessions regularly because they are getting started with their election campaigning. Iraq will hold federal elections on May 12.
Last month, the Iraqi parliament sat only five times and this month there have been no official sessions. This is despite the fact that internal rules say there should be eight sessions every month. In fact dozens of sessions have resulted in inaction because of absenteeism and the resulting lack of quorum – that is, not enough MPs were there to make any vote on laws binding.
The official parliamentary website shows that 165 laws have been passed and 108 laws have not been approved, over the past four years since this parliamentary session started. The laws that were passed and which got the most attention included those that looked at parliamentary rules, political parties, the national oil company’s activities and how Iraq’s Shiite Muslim militias and its counter-terrorism forces should be regulated. None of these really had much to do with improving the lives of ordinary citizens though.
“Parliament has failed to pass important laws that touch on core social issues. In that regard, it has ignored laws that deal with the economy and the country’s wealth, as well as other important legal rulings that have been being ignored for years,” well known political analyst, writer and commentator, Ghalib al-Shahbandar, told NIQASH. “A lot of the MPS didn’t even bother to show up – an insult to the Iraqi voters. And the questioning of officials or ministers by parliament was just a formality. Some MPs only support this questioning for the purposes of election propaganda.”


As Iraq again gears up for elections, that's the sad result of the last four years.  One of the many reasons for the apathy and/or anger some are expressing in Iraq.

There is absolutely no reason to believe that this election will be different than all previous elections and that Iraqis will end up voting for what is best for Iraq rather than what is best for their religious sect etc.
1 reply1 retweet3 likes

Welcome to Iraq, year 2018, 13 years after dictatorial regime of Saddam. An angry man hitting posters of candidates for upcoming elections. No one trusts and sees a future for failed state of Iraq. I don’t blame them. Iraq was and still is a failed state. It’s time to divide.


Another reason for the anger and/or apathy is the US government's repeated intrusions into the election process.  Most infamously, in 2010, US President Barack Obama overturned the votes of the Iraqi people to give Nouri al-Maliki a second term as prime minister after the people had used the ballot box to call for change.  (Barack used The Erbil Agreement to overturn the votes.)  As YENI SAFAK reports this morning, Iraqis still detect US interference:

Brett McGurk, special presidential envoy for the Global Coalition to Defeat Daesh, visited Iraq’s Mosul on Thursday in a move seen as part of a ploy before Baghdad’s May 12 election. McGurk has held a series of meetings in Erbil, Sulaymaniyah, Baghdad and Mosul.
“McGurk’s activities deepen instability and sow seeds of unrest. The U.S. has extended its hand into our ballot box. It’s a dangerous development for Brett McGurk’s number of meetings to rise a month before the elections,” said Fayha Bayatlı, a former Iraqi member of parliament in an exclusive interview with Yeni Şafak daily.
“The U.S. and European countries always want chaos to prevail in Iraq. They all take advantage of the instability in the region. Iraq’s Central Government made a series of decisions regarding Kirkuk and Mosul and took military, political and economic steps. We know that the U.S. and Western bloc is disturbed by these decisions,” Bayatlı added.

The other scandal that arose around the posters was the fact that some pictures of candidates and posters were torn down almost as soon as they were put up, by apparently organised groups. It appeared to be a systematic campaign.
Most of the tearing down was done by groups of teenagers who appeared to have been motivated by certain political parties, Hamid Abdul-Rahim, a senior member of the Baghdad police, told NIQASH. The police have now issued orders to their officers that they should keep an eye on the posters and notify their superiors if there are further organised attempts to tear them down. “This will continue until election day,” Abdul-Rahim said.

But it’s not just organized gangs who are opposed to the posters. A number of ordinary people filmed themselves in front of certain candidates’ posters and then criticized or abused them, before loading the results onto social media.


Each election sees most of the same people re-elected and nothing gets done.

Will this go round be any different?


May 12th, elections are supposed to take place in Iraq.  Ali Jawad (ANADOLU AGENCY) notes, "A total of 24 million Iraqis are eligible to cast their ballots to elect members of parliament, who will in turn elect the Iraqi president and prime minister."  RUDAW adds, "Around 7,000 candidates have registered to stand in the May 12 poll, with 329 parliamentary seats up for grabs."  RUDAW also notes that 60 Christian candidates are competing for the five allotted minority seats.


Hayder al-Abadi is hoping to be prime minister for a second term.  He also hoped to campaign on his claim that he destroyed ISIS.  However, Richard Spencer (TIMES OF LONDON) reports:

Mr Abadi declared victory over Isis in December but Iraqi intelligence believes that 3,000 militants are still operating in semi-governed areas in the former “jihadist belt”.
Isis was defeated once before in Iraq but has returned to devastating effect. The distractions of other conflicts in Iraq and Syria, and questionable priorities in their capitals, are once again allowing the group to live on, just as it was supposed to have been quashed.
Hayder also promised, at the start of his term in 2014, to take on corruption.  That hasn't happened either.  This week, his campaign saw another set back when a candidate on his slate was accused of conduct unbecoming.  He may have made matters worse by refusing to stand with the candidate who denied the rumors.  RUDAW reports:

The Victory (Nasr) Coalition of Haider al-Abadi has withdrawn the candidacy of one of its members after an alleged sex tape of her was circulated online. The candidate said the video is a fake and a plot against her, but has submitted her resignation.

“Every faction and coalition reserves the right to revoke the [membership] of any candidate who does not meet the laws and conditions. This female candidate has worked contrary to the laws of the Nasr Coalition,” Hussein al-A’dily, spokesperson for the list told Rudaw.

The candidate, Intidhar Ahmed Jassim, is a professor of economy and administration at al-Muntansaryah University in Baghdad and has a PhD in the same field. She is married and has three children.

She said the video shared online allegedly showing her having sex with another man is a fake.

“Some fake pages, supported by some parties, talked about a fabricated and photo-shopped video to ruin my reputation. I don’t ever fall. Iraq progresses forward,” she posted on Facebook.

She reminded her followers that she has served Iraq as a professor for a long time and has held other positions as well.

Already some are disputing the decision:


In other news, the US government continues to act as though only some American citizens have rights.  It goes to the point Chris Hedges makes in this essay.  If the person needs to be tried, he needs to be tried in a US court, not hidden away.

BREAKING: A federal judge has blocked the Trump administration from transferring an American held by the U.S. military in Iraq since September to another country. 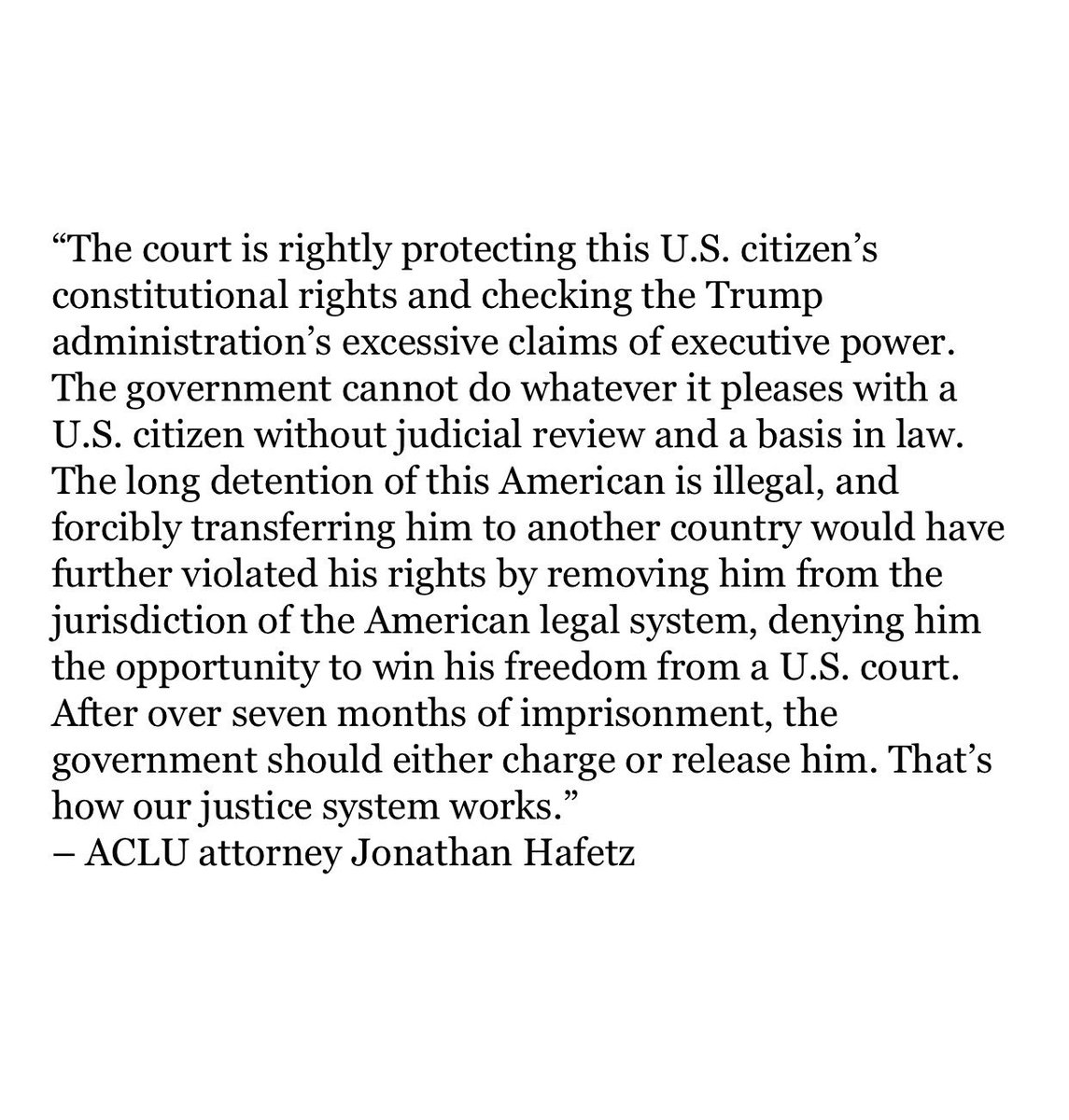 U.S. District Judge Tanya S. Chutkan issued the preliminary injunction Thursday evening, minutes before an 8 p.m. deadline to stop the transfer. The government had provided 72-hour notice, as required by the court, earlier this week that it planned to send the man, whose name has not been made public, to a third country.
The detainee is a dual U.S.-Saudi citizen who surrendered in September of last year to a Syrian militia backed by the United States. The militia handed him off to the American military, which has held him as an enemy combatant at a U.S. military facility in Iraq since then.

The government suspects the man of being a member of the Islamic State.


Meanwhile a real terrorist, a true killer, walks the US promoting another poorly written book.  Mad Maddie Albright, responsible for the deaths of over a half million Iraqi children is being wrongly hailed as a 'feminist.'  I get it, she's ugly, she's loud, she's pushy.  She meets the 70s media stereotype of a 'feminist.'  But she's not a feminist.  She's a murderer.

Lesley Stahl: We have heard that a half million children have died [as a result of sanctions on Iraq]. That’s more children than died in Hiroshima. And, you know, is the price worth it? Albright: I think this is a very hard choice, but the price–we think the price is worth it. 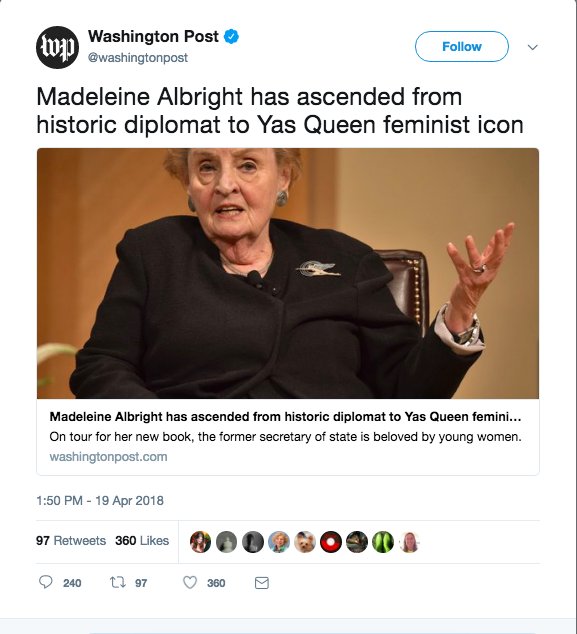