I've not been thrilled with most movies lately.  But I am looking forward to seeing WIDOWS.


Meet me down by
the railway station
I've been waiting
And I'm through waiting for you
The train sings the same kind of blues
-- "That's Alright," written by Stevie Nicks, first appears on Fleetwood Mac's MIRAGE

John Davison (REUTERS) types, "At Baghdad’s grand but half-empty railway station, a single train is sputtering to life. It is the newly revived daily service to Falluja, a dusty town to the west once infamous as a Sunni insurgent stronghold."

Meet me down by the railway station, indeed.  Is it that time again?  I must have forgotten to mark the calendar.  Time to pimp the railways again.  As a news story.  Those of us paying attention to the ongoing Iraq War for some time now are aware this little tale pops up frequently whenever there's no other Happy Talk to sell.  Most ifnamously, it was being pimped in the early years of the war when Deborah Haynes (then with THE TIMES OF LONDON, now with SKY TV) had to break the truth to everyone:  The story was a bust.

So now we're back to yet another wave of Operation Happy Talk.

How sad.  And too bad that Deborah Haynes is no longer covering Iraq.  Or Ned Parker.  Or anyone that really mattered.  Let's note the video below, from 2015, where Deborah's speaking about Iraq.  Try to imagine any of the current crop of reporters for Western news agencies speaking any truths.

Let's do an excerpt.

Deborah Haynes:  Instead of investing in the peace -- and this is hugely regrettable.  Instead of investing in the peace, the Blair government was more focused on pulling out as quickly as possible.  This policy led to insincere proclamations to the British public of stability in southern Iraq -- all the while while there's an Iranian-backed Shia militia in effective control.  This culminated in a ludicrous transfer of authority for the security in Basra to the Iraqi authorities from the British which took place at the Basra International Airport which was adjacent to the sprawling British base and a couple of miles away from the actual city center.  Why?  Because it was too dangerous to conduct this transfer of authority in the city.  Madness.  I remember being escorted into the ladies' toilets of the airport at Basra by a British security guard because it was too dangerous for me to go in there on my own.  And this was -- this was success.


Basra.  Where the protests have returned.


Any #Iraqi political party, including @nourialmalikiiq’s, attempting to ride the wave of #BasraProtests to gain support for #Basra becoming an autonomous region is only after political gains and is no way, shape, or form connected to or associated with the youth on the streets.
0 replies2 retweets2 likes


Protesters are making their way toward the burned down #Basra Provincial Building. Video via @hasanenalhijaj #BasraProtests #BasraRegion

In case you haven’t received the message.

Video from today’s protests in #Basra. Protesters chanted against the Dawa Party, accusing the party of climbing on the backs of ordinary citizens through fraudulence and theft. #BasraProtests #BasraRegion 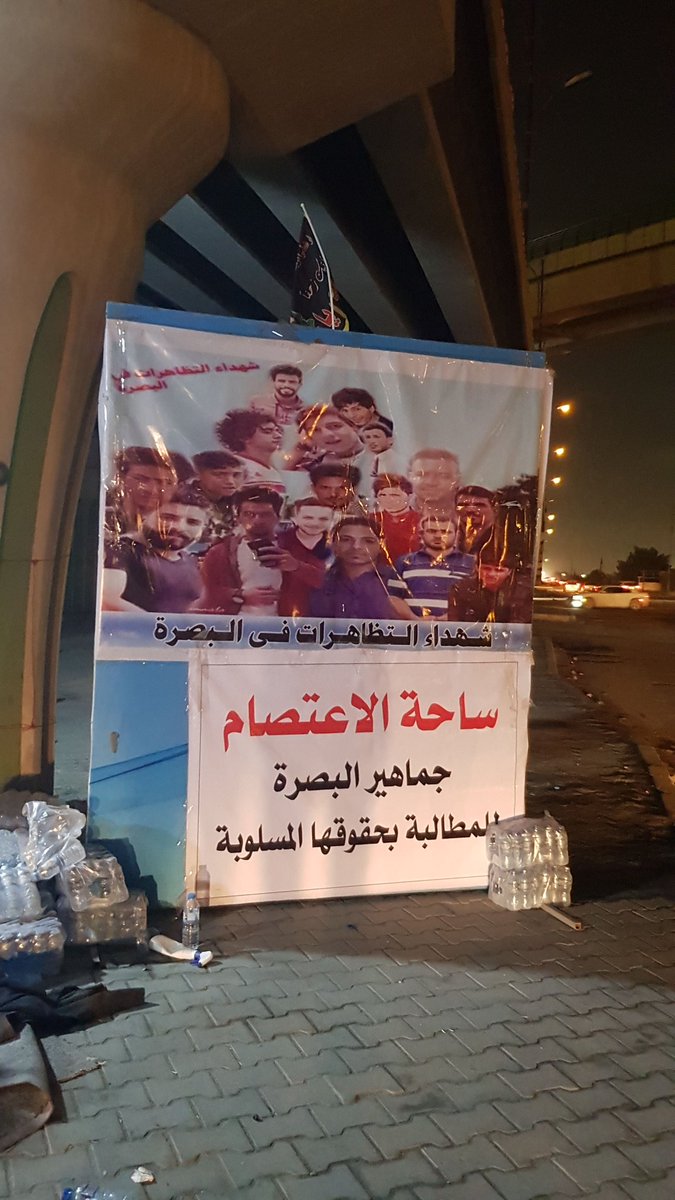 
1/2) A strong message from civil society organizations in #Basra, today: 1) Calling on @AdilAbdAlMahdi to hold the Council of Ministers meetings in #Basrah given the urgent needs in the economic capital of #Iraq.


2/2) 2) Highlighting that #Basra should’ve been represented in the CoM through the oil & transportation ministries. 3) Expressing frustration with the unjust killing of #Basrah protesters, demanding their rights to justice. #BasraProtests
0 replies1 retweet2 likes


Foreign Policy magazine: Baghdad government has ignored the rampant poverty in Basra south of iraq ,causing  a wave of protests over the past months, exacerbating the deteriorating situation in the oil-rich province while its people are suffering deprivation.

Basra.  Dead fish.  The new prime minister's inability to fill a Cabinet.  So many problems in Iraq.

On the last one, KURDISTAN 24 reports:

A candidate for the pro-Iran Shia Asaib Ahl al-Haq militia on Monday announced the withdrawal of his candidacy for the post of Iraq’s Minister of Culture, saying another candidate would replace him.
Asaib Ahl al-Haq is one of the militia factions within the Hashd al-Shaabi, also known as Popular Mobilization Forces (PMF), supported by Tehran. The militia has a political wing, al-Fatih (Conquest), which participated in Iraq’s May parliamentary election and came in the second place with 48 seats.

The withdrawal of the militia’s candidate, Hassan al-Rubaie, came as Iraqi lawmakers began collecting signatures to decrease the number of ministries in Iraq’s new government, headed by Prime Minister Adil Abdul-Mahdi. Over the past weeks, Abdul-Mahdi has been seeking to complete the formation of his cabinet.


There are 22 spots in the Cabinet.  Only 18 have been filled.  Among the notable posts that remain empty?  Minister of the Interior and Minister of Defense.


In Iraq, Building Coalition says Parliament will likely vote on unfilled cabinet positions on Thursday. Falih Fayyadh will be voted on for Interior Minister despite Sairoon's objections. No progress on Defense Minister due to Sunni disagreements.
mobp.as/NwHEn
0 replies3 retweets0 likes


Meanwhile in the US, a War Criminal received an award.  Bully Boy Bush was presented with an award by the ridiculous Joe Biden.

Joe Biden presented an award to George W Bush and his wife yesterday for their commitment to veterans. A friend's husband left for Iraq last week.
1DayBetter added,

Hundreds of thousands of innocent people in Afghanistan and Iraq are DEAD because of the lies spewed by the Bush Administration two start two wars and their continuation by the Obama Administration.…
Show this thread
0 replies0 retweets0 likes

Giving George W. Bush, the man most responsible for the destruction of Christianity in Iraq & for causing the 15-year Iraqi Christian Genocide,
a “Liberty Medal” is a sick joke and an insult to Iraqi Christian genocide victims.

About Face: Veterans Against the War‏ @VetsAboutFace 11h11 hours ago


Tonight when George W. Bush received the #LibertyMedal and gave his speech, Iraq and Afghanistan veterans can be heard clearly shouting “SHAME!” throughout its entirety.

No Awards for Endless Wars!
Take action! Visit Us at:
aboutfaceveterans.org/takeaction


Happening now: Iraq and Afghanistan #veterans have blocked entrances to the National Constitution Center in Philadelphia where Joe Biden is awarding the "Liberty Medal" to war criminal George W. Bush. Dozens of... facebook.com/20779515264065…
0 replies2 retweets1 like


Hundreds of thousands of innocent people in Afghanistan and Iraq are DEAD because of the lies spewed by the Bush Administration two start two wars and their continuation by the Obama Administration.