Rami's delivering a new performance -- trying to convince the world that he never, ever knew about Bryan Singer and his abuse of boys.

✩ ria‏ @matchaguk 17h17 hours ago
can stupid rami malek fans get out of my mentions please until youve been a victim of sexual assault you dont get to tell me im being overly harsh about his attitude towards bryan singer,,,literally fuck him and fuck that dumbass movie
0 replies0 retweets1 like

Thursday, January 24, 2019.  The Iraq War continues and embracing someone who lies about Vietnam is not going to end it any sooner.

We haven't spent time on the rorschach test -- others have -- especially as media criticism, and good for them.  But we are going to weigh in on one aspect.  Nathan Phillips is a liar and is not worthy of support from the true left. Elaine made that clear in "Nathan Phillips is a disgusting attention whore" where she quoted his declaration of how he was called a "baby killer" and spat on by a "hippie girl" when he returned from Vietnam.  First the nonsense of the spitting.  Jerry Lembcke has addressed a lie for years, repeatedly debunking it, over and over.  For NYT on October 30, 2017, he wrote:

Acknowledging that I could not prove the negative — that they were not true — I went on to say there is no corroboration or documentary evidence, such as newspaper reports from the time, that they are true. Many of the stories have implausible details, like returning soldiers deplaning at San Francisco Airport, where they were met by groups of spitting hippies. In fact, return flights landed at military air bases like Travis, from which protesters would have been barred. Others include claims that military authorities told them on returning flights to change into civilian clothes upon arrival lest they be attacked by protesters. Trash cans at the Los Angeles airport were piled high with abandoned uniforms, according to one eyewitness, a sight that would surely have been documented by news photographers — if it had existed.

And some of the stories have more than a little of a fantasy element: Some claim the spitters were young girls, an image perhaps conjured in the imaginations of veterans suffering the indignities of a lost war.
Listeners, I speculated, are loath to question the truth of the stories lest aspersion be seemingly cast on the authenticity of the teller. The war in Vietnam was America’s longest war at the time, and its first defeat. The loss to such a small, underdeveloped and outgunned nation was a tough pill for Americans to swallow, many still basking in post-World War II triumphalism. The image of protesters spitting on troops enlivened notions that the military mission had been compromised, even betrayed, by weak-kneed liberalism in Congress and seditious radicalism on college campuses. The spitting stories provided reassuring confirmation that had it not been for those duplicitous fifth-columnists, the Vietnamese would have never beaten us.


We betray Jerry and his work when we side with liar Nathan.  Nathan was not in Vietnam.  There's a rush of publications -- including THE NEW YORK TIMES as Elaine notes in "Nathan Phillips kept the US safe from the Maytag Repair Man" -- who are covering for Nathan and doing corrections with 'he didn't claim he was a Vietnam veteran' type b.s.  In some instances, he has claimed to be a veteran of the Vietnam era or Vietnam times.  That's misleading and he knows it.  More to the point, before he learned to fudge, he resorted to outright lying.

"I'm a Vietnam Vet. I served in Marine Corps 72 to 76. I got discharged May 5, 1976. I got honorable discharge and one of the boxes shows peacetime or, what my box says is that I was **in theater**.  I don't talk much about my Vietnam times."

I have no problem with someone who chooses to resist war and I will defend their right to anytime.  But let's be very clear that Kerpen's multiple stints of going AWOL were not about war resistance -- he wasn't in Vietnam and he was never going to be in Vietnam.  He's someone who is troubled.  And that was his problem for years and years -- you can see the toll on him when he speaks -- but then he went after kids and then tried to use his 'Vietnam veteran' status for his bullying.

I won't deny that he needs help.  He does and I strongly urge him to seek professional care.  His attack on kids is an issue for this community because we don't tolerate that here.  But his attack on the peace movement?  He needs to be kicked to the curb.

He's a tiny, powerless man who thought he could harness lies and make himself look better.  As Elaine said, he's an attention whore.  He begged to be in the spotlight.  It's about time the press showed how liars get treated -- especially liars who claim combat service that they do not have.  His lies about his service in Vietnam are so vile that it's one thing that we on the left and the right should agree deserves to be called out -- one thing we should easily agree on.

Again, Nathan's AWOL was not about war resistance.  And his repeating lies to smear the peace movement are disgusting.

I followed the link and what did I see? A more recent photo of Jeremy Hinzman, Nga Nguyen, and Liam @TorontoQuakers! Their photo from their time at Quaker House in Fayetteville, NC, is still on our wall. Loved seeing the newer photo. 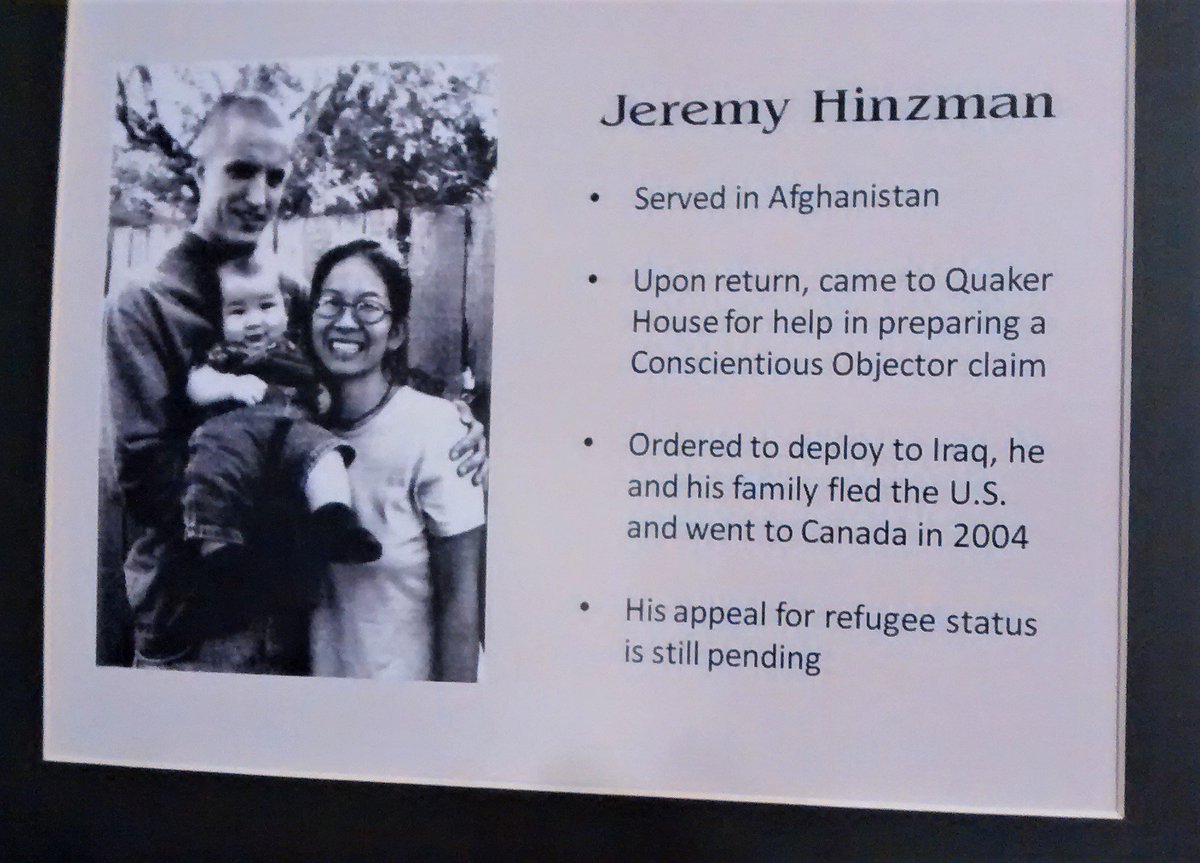 Jeremy remains in Canada after self-checking out.  Near the end of 2015, John Hagan (NOW) reported:

Beginning with Hinzman in 2004, U.S. war resisters chose to make Canada their home because of our reputation for fairness and compassion and our history under another prime minister named Trudeau of welcoming 50,000 resisters during the Vietnam War.
Hinzman, a soldier in the 82nd Air-borne Division, was the first American Iraq War resister to seek refugee status in Canada. He served in a non-combat role in Afghanistan in 2002-03 after applying for conscientious objector status.
Denied that status and told he was to be deployed to Iraq, Hinzman, his wife and young son sought asylum here in 2004. He was granted a last-minute stay of deportation in 2008. But his request to stay in Canada on compassionate grounds is still wending its way through the courts.
Rodney Watson, who spent a year deployed in Mosul, Iraq, could not stay silent about unnecessary violence he witnessed by the occupying troops. He has been in sanctuary for over half a decade, inside a Vancouver church to avoid deportation after the Harper government ordered him returned to the U.S.
Kimberly Rivera refused further deployment after witnessing mistreatment of Iraqi civilians. She carried an empty rifle while in Iraq because she could not stand the thought of killing a human being.
Despite the support of Archbishop Emeritus Desmond Tutu and a petition signed by more than 20,000 supporters, Rivera was forced from Canada in 2012 into the custody of the U.S. Army and a military prison, where she gave birth. Conservative MPs cheered in the House of Commons at news of her prosecution.
The Harper government targeted about 50 American veterans living in Canada, directing that their cases for entry be treated as potentially “criminally inadmissible.”

I see the War Resisters Support Campaign hasn't Tweeted in a while, here's the most recent Tweet:


These American deserters from the Iraq war may finally get refuge in Canada: @vicecanada news.vice.com/article/these-… #cdnpoli #refugees
0 replies3 retweets3 likes

Two years and five months ago.  It is difficult to write the same story over and over or Tweet the same thing over and over, I grasp that.  Maybe some people can find a way to cover today's War Resisters?  They have not been granted asylum and they still remain at risk.


Like their struggle, the Iraq War goes on and goes with little press coverage. Ahmed Rasheed (REUTERS) notes a new development, the Parliament has passed their 2019 budget. It should read "has finally passed their 2019 budget."  Rasheed also writes, "Iraq’s infrastructure is wrecked after years of war against Islamic State and alleged corruption that has left thousands of people without power and water."  That's in need of an addition as well -- unless the destruction from the war itself is no longer counted.  Are we now blaming the 2003 US-led invasion on the Islamic State?  Well serves us all up some 'freedom fries' with that whopper.

US intervention in Iraq transformed the country into a modern day utopia? NO. It started a cycle of violence that claimed a million lives. Spare us your nonsense please.
0 replies0 retweets0 likes

When it comes to the media, the war resisters who took brave stands are as forgotten as the war itself.