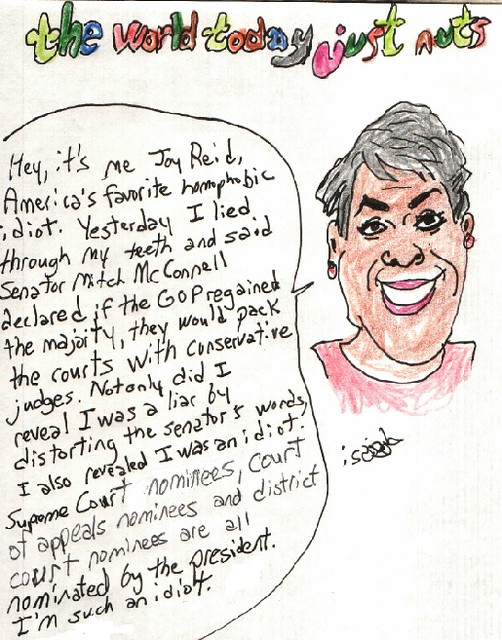 Are you a MANIFEST fan?  If so, bad news.

NBC gave it the axe but there was hope that NETLIX would pick it up.  Nope.  They took a pass.

I'm not surprised.  NETFLIX never grabs a show that needs to be grabbed.

MANIFEST had an audience.

But it didn't have a Barack connection, did it?

DESIGNATED SURVIVOR didn't deserve a third season -- and what they provided on NETFLIX really drove that home.  But when you stuff the board with Barackas then they're going to give a green light to their buddy who was part of the administration and save his bad show after ABC axed it.

NETFLIX doesn't even like sci-fy.  Look at how they treated SENS8.

Monday, May 21, 2021.  Violence continues in Iraq, a mother fights for justice for her assassinated son and much more.

Starting with WALK-INS WELCOME WITH BRIDGET PHETASY where Bridget's guest is Glenn Greenwald.

Moving over to Iraq, Senator Rand Paul has a column at THE LEXINGTON HERALD LEADER which opens:

It is easier to start a war than end one. That argument alone should deter us from war and yet . . .time and time again man’s bellicosity combined often with imbecility entices us to war.

The Iraq war was no exception. Sold as a response to 9/11 with propaganda so irresponsible that it convinced some of our guys to graffiti our missiles with words like: “this is payback for 9/11.” Only it wasn’t. Not only did Saddam Hussein have nothing to do with 9/11, deposing him led to chaos and a breeding ground for more terrorism.

Regime change led to an Iraq more aligned with Iran than the US. Regime change required the lives of roughly 4,000 young men and women and the injuries, often severe, of over 31,000.

On Thursday, Congress finally voted to end the war in Iraq, nearly 20 years after it began. Intermittent combat and even renewed wars were fought using the 2002 Iraq authorization. So, the vote to repeal the 2002 AUMF (Authorization for Use of Military Force) has real life implications.

Some from the pro-interventionist side wanted to replace the 2002 AUMF with a new one to continue to authorize war. I say enough war. If you want to send our best and brightest to fight again in Iraq, come to Congress with a specific declaration of why we should return to war. Otherwise, give peace a chance.

Most left outlets appear to be ignoring the news.  I don't see anything at IN THESE TIMES, THE NATION, THE PRGORESSIVE, etc -- at least not on their main page.

And that's probably the right reaction because it doesn't really mean that much.  Jeffrey St. Clair (COUNTERPUNCH) points out, "The House voted to revoke the 2002 AUMF in Iraq, which is long overdue. But it’s the 2001 AUMF that continues to authorize the forever wars…"

And they may also be taking a pass on the nonsense of Saint Barbara Lee.  She's done nothing for years but flap her gums.  Now, when the president of the United States is okay with ending it, it's ended.  It has nothing to do with Barbara who did nothing -- including nothing to build support for ending it over the years.  She's useless and a fake ass.  What's next?  Again to Jeffrey St. Clair (COUNTERPUNCH):

In the latest provocative machination from the guy who pledged to end the Forever Wars, Biden is actively considering installing a permanent Naval Task Force in the Pacific with the specific charge to “counter China”…

On nonsense, I want to return to THE NATION for just a moment.  They have an article calling for the closure of Guantanamo Bay and it's argued in a 'we lost loved ones on 9/11' which I think is total nonsense.  If they want to present that argument as one argument in a group of arguments, fine.  But that's not what they're doing.

Does the gulag at Guantanamo need to be closed?  Absolutely.

Does that article help anyone?

By itself, it allows most readers to nod along as they read along and then do nothing.  They don't have the 'standing' that the magazine gives the writers.  This is walling off discussion.  You lost a loved one during 9/11?  I am very storry for you.  That doesn't give you more of a voice or more insight into this issue that effects the world.  It doesn't make your voice anymore meaningful.

During the age of Bill O'Reilly and his demonizing, there might have been some sort of reason for the way THE NATION is selling Close Guantanamo today.  Closing Guantanamo is something we should all be arguing against and we all have equal standing.  This is being done in our name.  This is torture.  We have looked the other way for almost two decades.  If THE NATION wants to do a broad section of voices, that's great.  But as it is, they've just told the bulk of their readers to shut up because this is work that needs to be done by those who have 'skin in the game' because they lost someone on 9/11.  It's a nonsense view and I really am disappointed in THE NATION for presenting it.

Two men were killed and a woman was wounded in a shooting on Erbil’s 60-meter Street on Sunday night (June 20).

NRT reporter Murad Ahmed said that a shooter riding in one vehicle opened fire on a group of people in another vehicle, before fleeing.

Erbil Police Directorate Spokesperson Hogr Aziz said that the motive behind the shooting was a “social issue,” a term used by the authorities to refer to non-party political violence or domestic violence.

XINHAU reports, "A farmer and his son were killed Sunday in a roadside bomb explosion in southern part of Iraqi capital Baghdad [. . .] The first attack occurred when an improvised explosive device blasted near the farmer's house in a village, according to a statement by the Iraqi Joint Operations Command (JOC)."  In other news,  PRESS TV notes:

A rocket attack has reportedly hit an air base hosting the occupying US troops in Iraq’s western province of Anbar, the latest in a series of assaults that have targeted American occupation forces in the Arab country over the past few months.

An unnamed security force said a Katyusha rocket had landed at the Ain al-Asad Air Base, located about 160 kilometers (100 miles) west of the capital Baghdad, on Sunday, without causing casualties.

The assault on the Ain Al-Asad base came as pro-Tehran groups hailed the election of Iranian ultraconservative cleric Ebrahim Raisi as the new president of the Islamic republic, with some saying it reflected the "failure" of America's "pawns" in the region.

The attack also comes 10 days after the US offered a reward of up to $3 million for information on strikes against its citizens in Iraq.

US interests in Iraq have come under repeated attack since October 2019, including with rockets, with Washington routinely blaming them on Iran-backed factions.

Kamal Chomani Tweets of other violence:

A horrible scene of Turkish drones targeting civilians. The airstrikes making life impossible for the Kurdish villagers in the border areas due to regular unexpected bombing& targeting the civilians. Rezhna Dehaty days "we build hope & the Turkish airstrikes destroy our hopes."
5:57 AM · Jun 20, 2021

A number of members of the Iraqi Parliament called for an immediate response to the Turkish Army and a cease to its advancement into northern Iraq, stressing the need to maintain Iraqi sovereignty, Almaloumah reported.

Fazel Jaber, a representative of the Iraqi Fatah Coalition lashed out at the Iraqi position in this regard and stated that Iraq's position is shameful because it has not taken any action to deter Turkey and to stop its repeated attacks on the sovereignty of Iraq.

The government and other officials must take serious action to deter Turkey and stop its actions in northern Iraq.

Guess who is among the ones making the call?  State of Law.  Nouri al-Maliki's political coalition.  State of Law's Kate Najman is quoted in the article about the violation of Iraq's sovereignty.

Nouri's been preparing for the upcoming elections.  I think he's a thug but I'm not an Iraqi voter.  He's been out of office (as prime minister) since 2014.  Is it long enough for most Iraqis to forget why they disliked him?  Elections are coming up, scheduled to take place in October.

The Iraqi Independent High Electoral Commission (IHEC) said on Sunday that it has approved 8,273 polling centers across the country as part of its preparations for the parliamentary elections scheduled for Oct. 10.

These centers consist of 55,041 polling stations, and each will receive a maximum of 450 voters, said a statement issued by the electoral commission on its website, stressing that the process of distributing polling stations depends on the voters' place of residence.

Moreover, the electoral commission "continues receiving responses from investigation bodies about the candidates' eligibility to verify that he or she is not employed in the armed forces or security institutions," according to the statement.

Initially, 3,523 candidates registered to participate in the elections, including 963 women, but figures will be updated once all candidate statistics are consolidated and cross-checked.

Approximately 185 candidates have already been disqualified but I guess including that wouldn't allow for feel-good coverage?

PBS's weekend edition of THE NEWSHOUR filed a report on Iraq:


Meanwhile a mother fights for justice.

The mother of assassinated activist Ihab al-Wazni held an open sit-in in front of Karbala's court on Sunday, demanding authorities reveal the identity of her son’s killer, local activists have confirmed to Rudaw English.

Dozens of activists supporting Samira al-Wazni gathered in front of the court, 40 days after the assassination of her son, demanding decisive steps to be taken by the government.

Activists said security forces prevented her from setting up a tent at the entrance to the court.

“You are all killers, I will not leave. I am not afraid of you, I will set the governor headquarter’s on fire if my son’s killers stay free” video footage shows her saying.

She delivered a statement in front of the Karbala court, chastising tribal elders.

"Where are you?” she said, addressing them as “a grieving woman who plays a role greater than yours."

"This government is devoid of morality...otherwise, they wouldn't let an old and sick woman sit on the streets and bear the burden of the government's negligence in order to get the blood of her son and obtain her most basic rights with retribution from the criminals.”

The courts and the government may look away but the people are noticing.

The United Nations (the humanitarian organization) ignores the mother of the martyr Ihab al-Wazni in Iraq, who was killed by the Iranian militias supported by the international community. #كلنا_ام_ايهاب
@UN
@UNIraq
@UNHumanRights 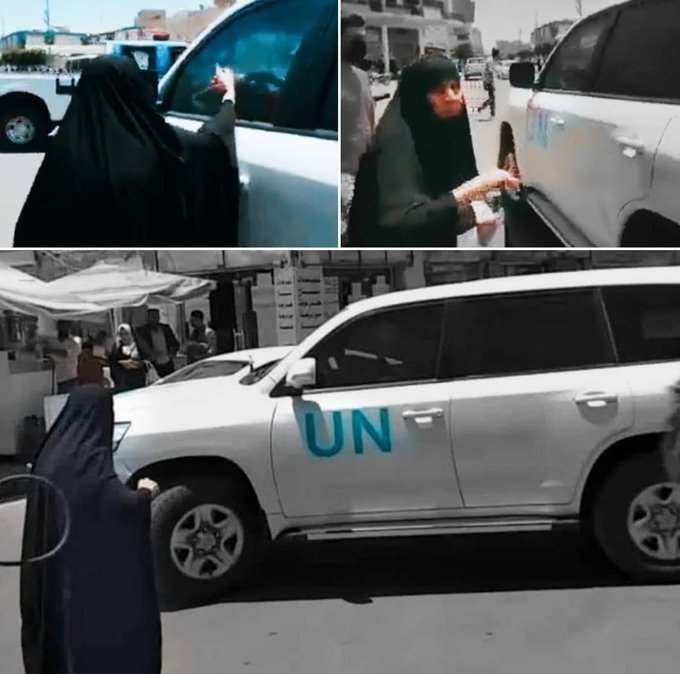 Mother of assassinated leading Iraqi activist Ihab al-Wazni. This brave woman is demanding her son’s justice against the govt. & militias, just by herself. They managed to kill al-Wazni, but not his courage & legacy. #كلنا_ام_ايهاب 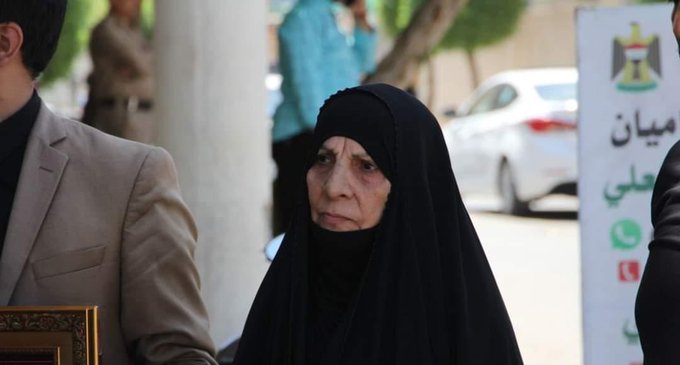 The mother of Ihab al-Wazni, an Iraqi activist who was assassinated by paramilitary groups in Karbala, is attempting to reach the United Nations car to demand justice for her son 40 days after his assassination. #EndImpunity 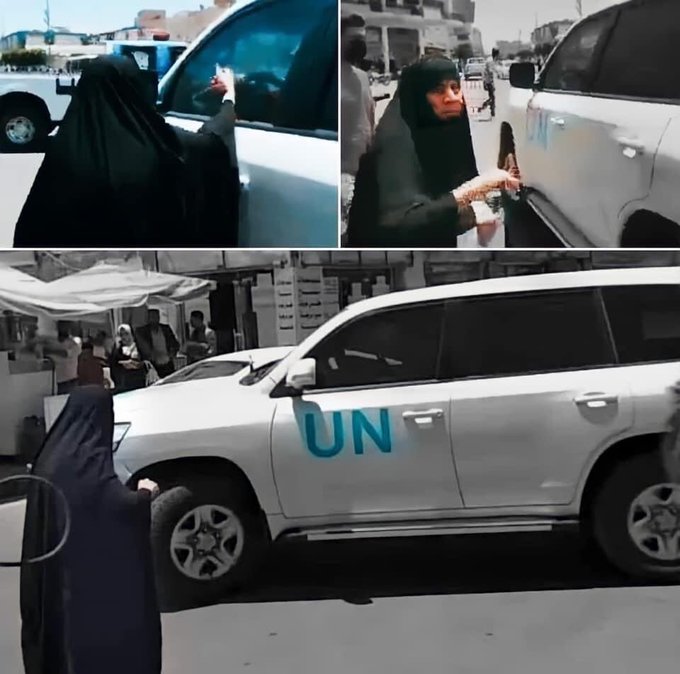 These men are stationed at the same checkpoint that let the killers of Ihab Al-Wazni through on the day of his assassination. They are complicit in the crime and should be tried as such.
1:29 PM · Jun 20, 2021

Instead of hearing from the victims like the mother of the recently assassinated activist Ihab Al-Wazni,
@UNIraq
is too busy talking to the killers, working on normalizing them, and portraying them as an "integral" part of Iraq to the international community. 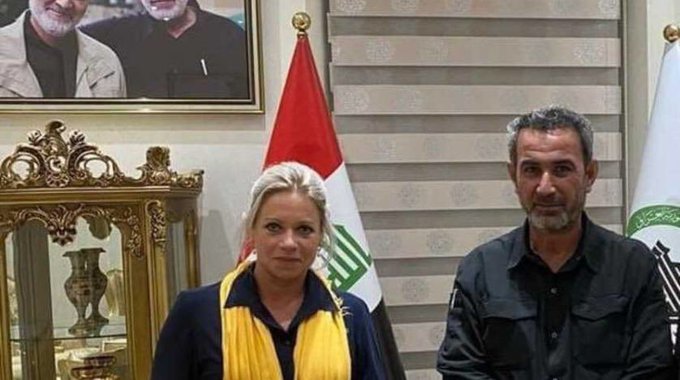 Iraq The mother of activist Ihab Al-Wazni, who was killed by militias affiliated to Iran, is ignored by the cars belonging to the United Nations Assistance Mission in Iraq (UNAMI) #كلنا_ام_ايهاب_الوزني