Summer TV is about to begin officially. I think it kicks off June 9th (today) with LOKI on DISNEY+. I am interested in catching that. Then on June 11th, season two of LUPIN which I can't wait for. ADULT SWIM has TUCA & BERTIE starting June 13th. FXX has season two of DAVE kicking off June 16th. June 18th, Rose Byrne shows up in PHYSICAL on APPLE+ -- though, honestly, when I saw a commercial the other day, I thought she was Susan Lucci and June 20th, AMC starts airing KEVIN CAN GO F**K HIMSELF.

And then July shows up with many more offerings -- the one I'm anticipating the most in July is a NETFLIX show.

I THINK YOU SHOULD LEAVE WITH TIM ROBINSON.

I really loved season one. My favorite sketch? Probably the one at the birthday party with the fecal fingers. :D It was a really funny show. For June, though, it's LUPIN that I'm most eager to see. After that LUKI. I will check out KEVIN CAN GO F**K HIMSELF but I don't have any real hopes for it. I have started watching LISLEY on APPLE+ because of Ava and C.I.'s praise for it in "TV: Mini-King and Mini-Halston."

Wednesday, June 9, 2021.  Turkey's persecution of the Kurds continues, Iraq wants to go nuclear, an alleged killer walks out of Iraqi custody, and much more.

Not the frustration in this Tweet by Kamal Chomani:

No one asks the KRG & the KDP to stop the Turkish war on the Kurds of #Turkey & the PKK on mountains, we know neither can do. What we all want from the KDP & the KRG is so simple: DON’T be Turkish proxies in this war, don’t legitimize Turkish war on Kurds, & don’t ally w/ Turkey.
3:19 AM · Jun 6, 2021

Kurds are frustrated -- with the Turkish government's aggression, with the weak responses from their officials and much more.  The issue has gotten very little attention from the mass media  Even a webinar on the subject that took place yesterday drew little attention (it will be posted here at the Washington Kuridsh Institute's YOUTUBE page but is not up yet).  Here's the press release for the event:

Turkey is sliding deeper into authoritarianism, with President Recep Tayyip Erdogan escalating state repression of the Kurds and all real and perceived forms of opposition within the country.  Outside of the country’s borders, he utilizes a large vast network to intimidate, threaten, and silence exiled Kurds, and continues to intensify Turkish military aggression in the Middle East and beyond, with the Kurdish people as his primary target. The Turkish military periodically attacks the Kurdish regions of Iraq and Syria and is now openly working to expand its zones of occupation in each of these countries, bringing war and mass displacement to areas that were once among the most stable in the region, ethnically cleansing these regions in an attempt to minimize or eliminate Kurdish presence and exacerbating an ongoing refugee crisis. Against a backdrop of war and existential threats from all sides, the Kurds, who played a leading role in eliminating the so-called caliphate of the Islamic State (ISIS) terrorist organization in cooperation with the US-led global coalition, enjoy relative autonomy in both Iraq and Syria.

The US and others have benefited greatly from the resistance of the Kurds against ISIS and the stability of their autonomous areas in Iraq and Syria and, while the Turkish state responds to the hard-won achievements of the Kurdish people with increased hostility, international reaction to these unprovoked attacks remains muted. As Erdogan continues to threaten and attack these regions, the US will eventually need to address this destabilizing Turkish military aggression. The Biden Administration knows the Kurds well, and has demonstrated a willingness to break with the foreign policy of its predecessors, but has yet to decisively respond to Erdogan’s belligerence or, more broadly, clarify its vision for the Middle East. Our distinguished speakers will discuss the regional and global consequences and policy ramifications of the Turkish state’s war on the Kurds, the emerging Kurdish dynamic in the Middle East, and possible policy approaches for Washington.

US foreign policy in the Middle East and the role of the Kurds – Dr. Henri Barkey

Does the Biden Administration have a Kurdish policy? – Amb. Peter Galbraith

@wdckurd
Amb. Peter Galbraith: "There is understanding this will happen sooner or later (independent Iraqi Kurdistan)" 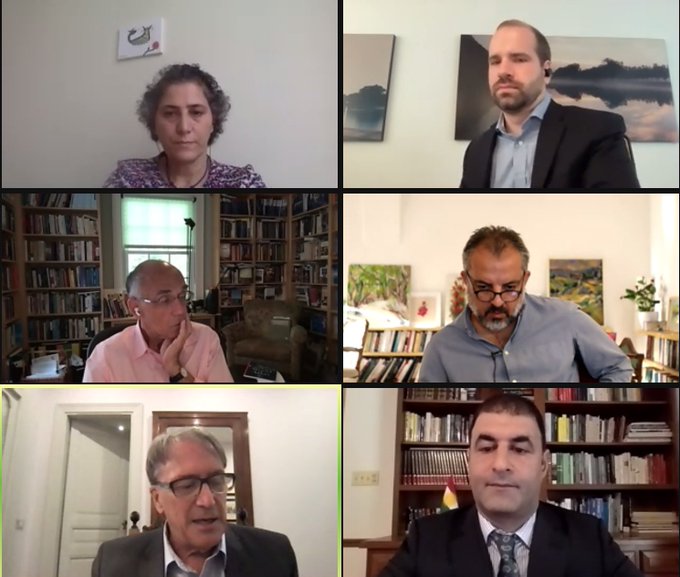 As noted here before (many times over the years), I know Peter Galbraith.  If the video goes up in the next 24 hours, we'll note it and probably emphasize Ptere's remarks.

The sponsor of the event notes:

Nilufer Koc
@nilkoc50
Since 2012 Erdogan publicly states he wants to restore territories of the Ottoman empire. Turkey accused Kurds of separatism and changing borders, but Turkey is doing so, not Kurds! #WKI 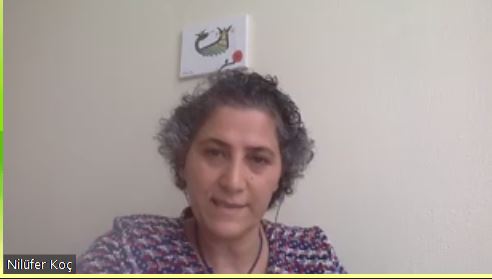 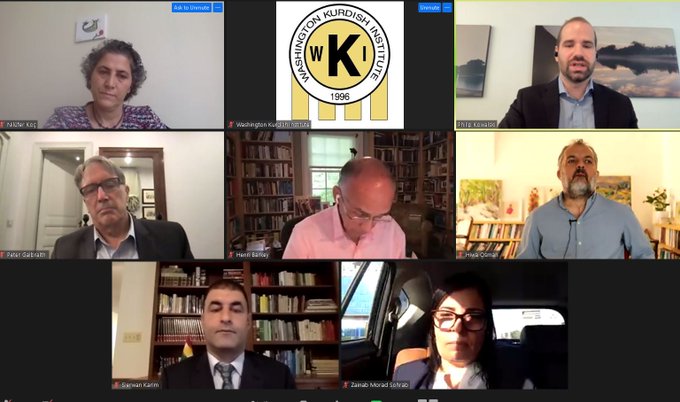 Another fire in the forests caused by Turkish airstrike Meanwhile, Turkish companies continue cutting down trees in the #Kurdistan Region and sending it to Turkey.
From
Patrick
1:16 PM · Jun 7, 2021

When not destroying forests, the Turkish government threatens in other ways.  ANHA notes:

The Turkish occupation state continues to practice water war against northern and eastern Syria by cutting off waters of the Euphrates River for several months, which portends a humanitarian and environmental catastrophe.

Turkey began blocking the Euphrates River since January 27, by pumping a quantity of no more than 200 cubic meters per second of water into Syrian territory, which is much less than the amount agreed upon between the Syrian and Turkish government in 1987.

The agreement stipulates that Turkey must allow the flow of water in a quantity of no less than 500 cubic meters per second into Syrian territory, while Iraq receives about 60 percent of this amount.

The Turkish breach of the agreement led to a significant decline in the river level inside Syrian territory, which led to repercussions on agriculture and electricity.

The Turkish water war is not new. It has been using it against Iraq and the Kurds for years, as the Iraqis suffer as a result of Turkish policies.

The Iraqis’ crisis worsened after their northern neighbor Turkey began operating the Ilisu Dam in 2018, which it built in 2006 in the village of Ilisu in Northern (Bakur) Kurdistan, with a height of 140 meters and a length of 1800 meters. This caused great harm to Iraq and to the Kurds who live on their lands in early Kurdistan.

The dam project has sparked international outrage for several reasons, the most important of which is the low level of water flowing into Syria, Iran and Iraq, as well as the impact of more than 50,000 residents of the areas surrounding the dam area in Bakur Kurdistan, especially in Elisu and other surrounding villages that will be completely submerged under the waters of the dam. Turkey justified the construction of the dam as it would provide electric power and job opportunities.

Since 2017, water shortages in Iraq have led to measures such as banning rice cultivation and prompting farmers to abandon their lands, and Basra has seen months of protests over the lack of potable water.

Beri said about this: "What is new about the issue of water war is that Turkey in the past used to cut off water or reduce the flow of water through certain dams in the past, but in the current form, Turkey is on the issue of the Euphrates water war in particular, as it is said to "catch two birds with one stone.” First, it fills the dams it has built in Northern Kurdistan, and thus also destroys large and comprehensive archaeological areas in order to obliterate the heritage of the Kurds there and in order to hide everything that is a Kurdish trace. The other point is to cut off the water from North and East Syria and West Kurdistan.

The Kurdistan Region is in northern Iraq.  The pandemic takes place in all areas of Iraq.  The World Health Organization notes:

Returning to the topic of violence, a militia leader who was detained for the murder of two activists has been released according to Jane Arraf:

#Iraq militia leader Qasim Muslih arrives in Karbala to rapturous welcome by paramilitary fighters - the city where he was accused of ordering assassinations of two activists. Militia pressure on judiciary seems to have led to his being cleared. Is this how Iraq ends?
3:59 AM · Jun 9, 2021

The leader was arrested on May 26 by troops from the country’s Ministry of Interior over extremism charges.

Earlier on Tuesday, there were conflicting reports about the release of Musleh. Sources close to the PMF said the country “released Musleh due to lack of evidence.”

If he has been released with charges denied, it's another slap in the face of the protesters

Though the US media largely ignored the arrest it was, as Sinan Mahmoud (THE NATIONAL) reminds, serious news:

The day after the arrest of Mr Musleh, armed militia members took to Baghdad's streets, gathering near the office of the prime minister and at an entrance to the Green Zone, risking a dangerous escalation of force.

Security forces and the elite Counter-Terrorism Service were deployed to protect the government and diplomatic missions in Baghdad.

The October Movement began protesting in the fall of 2019.  They endured threats, violence and even murder.  A number of activists have been assassinated.  Journalists who cover the protests have also been threatened.  These threats come from factions of the government including the militias.  To date, there has been no one convicted for the murder of an activist.  Sura Ali (RUDAW) reports:

The head of the Iraqi Supreme Judicial Council reiterated the legal right to peaceful demonstrations and called on the courts and investigative bodies to follow up on the killing of activists in a meeting with protest representatives, the council said on Tuesday.

"The requests and observations of the demonstrators' representatives were listened to, and the investigative bodies must resolve the cases of the killing of protesters and the attacks they were subjected to, and direct all federal appeals courts to follow up on those cases," Judge Faiq Zaidan said in a statement.

The meeting comes the day after the mother of activist Ihab al-Wazni, assassinated last month, gave Zaidan 12 days to reveal the identity of Wazni’s killers and put them on trial.

In a press conference on Monday, Samira al-Wazni demanded "disclosure of her son's killers in a public trial, to serve as an example to those who do not sanctify the blood of Iraqis.”

"I give the head of the Supreme Judicial Council, Mr. Faiq Zaidan, and the judge of the terrorism court 12 days to reveal the perpetrators and bring them to a public trial…. if not, may god, the country and the people forgive me for what I will do in the coming days,” she said from Karbala.

There's nother big issue out of Iraq in the news cycle and I honestly don't want to touch it.  The stupidity involved is just so great and so potentially costly.

I don't support nuclear energy -- one of the main reasons I never fell for the con that was Andrew Yang.

But I don't get how anyone -- even those who support nuclear energy -- could see this as good news.

There have been how many suicide bombers in Iraq in the last 18 years?  Do we think that -- because there were so many -- no more potential ones exist?

Why would you build a nuclear plant in Iraq?

And Bully Boy Bush used what lie to justify the Iraq War -- I know, it's a long list of lies.  But I'm referring to the one that the late Ambassador Joe Wilson noted was not true -- that Saddam Hussein had sought yellow-cake uranium from Africa.  So now let's just put enriched uranium in Iraq?

When the government can't protect themselves, let alone the people?

It makes no sense.

We're going to wind down by noting two segments from BREAKING POINT.

BREAKING POINT is Krystal Ball and Saagar Enjeti's new show -- their old show has been infested with some refugee from The Hair Club For Men.