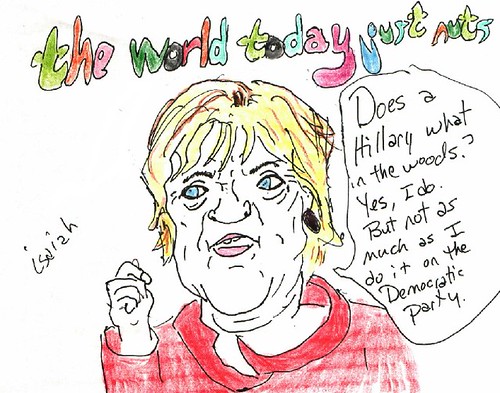 Above is Isaiah's THE WORLD TODAY "The Woods."

BIG LITTLE LIES has ended up reminding HBO what a hit is.

Too many so-so shows like GIRLS failed to deliver audiences.

Even Sarah Jessica Parker's return to HBO has been underwhelming.

But Nicole Kidman and Reese Witherspoon's show has been a huge hit.

Could it have a second season?

As an anthology, possibly.

But it has wrapped up the book it's based upon so some wonder there's no season two with the same cast.

Just a reminder that Jared Kushner is in no way qualified for any of these massively important government tasks he's being put in charge of.

Just a reminder, if we're talking about visiting Iraq, anyone's qualified for that.

Just a reminder, in the lead up to the Iraq War, the qualified experts were full of it and all wrong.

Increasingly, if it is a foreign policy trip or meeting President Trump cares about, Jared Kushner is there. -- @MajorCBS

I'll wait to see what comments, judgments Kushner makes before slamming him.

Unless Jared Kushner visits Iraq to go sightseeing, there's no reason for him to be there. He's just a realtor, not a diplomat
#morningjoe

What diplomat did Barack Obama send?

In fact, here's a pop quiz for all those whining about Jared's visit to Iraq: How many times in his two term presidency did Barack Obama visit Iraq?

When you can pass that pop quiz, maybe you're qualified to comment on Iraq visits.


Look at the vile hatred spewing up.


I didn't even know Jared's last name until the Iraq visit.

I certainly don't need to know what his father did.


I won't judge Chelsea Clinton by her father Bill's harassment of Paula Jones or his alleged rape of Juanita Broaddrick.


Children aren't responsible for what their parents do.


Trying to smear Jared with the actions of his father is contemptible.

I hope he sees something illuminating.  I hope he interprets it accurately.  I hope it leads him to lobby his father-in-law.

But even if he returns a raving hawk screaming for no war, I won't say he shouldn't have visited.

I'll call him out for his opinions but I won't say he shouldn't have visited.

DOD spokesman says Kushner "traveling on behalf of the President" to reaffirm US support of Iraq and US personnel deployed there.

Since he met with Iraq's Prime Minister Hayder al-Abadi when Hayder was in DC recently, that's not surprising.


Surprising is Will Bunch-ed Panties who's just written:


Sunday night he scribbled a laughable piece on Donald Trump which included:

Halfway around the world, in an endless war with questionable authorization, Trump and his Pentagon are widening the conflict with violent force -- and with almost no public input, oversight, or scrutiny.

On the same day as its "Our Dishonest President" editorial, the Los Angeles Times' front page was reporting that the Trump administration has taken the unprecedented step of failing to initially disclose major troop deployments of hundreds of Marines and Army paratroopers into Syria and Iraq. In essence, Trump is determined to send young Americans into a secret war with no public scrutiny; as former Obama-era National Security Council spokesman Ned Price told the newspaper: “It’s truly shocking that the current administration furtively deploys troops without public debate or describing their larger strategy.”
It's worth noting that Trump didn't start the wars in Iraq and Syria, and his immediate predecessor Obama deserves criticism (and received it in this space) for continuing and even expanding the powers to wage war and to kill people with drone strikes that had already gone too far during Bush 43's tenure. Yet in just 73 days, the new president and his military commanders have waged war even more violently, and even more innocent people have died.

Does that shock Ned Price?

Of the Obama administration?

Remember in 2012 when Barack sent special-ops into Iraq -- while claiming he ended the Iraq War?

Well maybe because Barack didn't announce he'd sent a unit of special-ops in.

And only one news outlet reported on it, hidden in Tim Arango's NEW YORK TIMES report on Syria:


There was no public discussion of that.

Barack was never even asked about it -- not even in the debates.

So Ned Price can stop whoring.

Which is why he pretends he called out Barack -- and offers two links.

The first goes to a generic column about drones -- there's no effort to hold Barack accountable in it.

But at least Will actually wrote that one.

The second link goes to a HUFFINGTON POST piece by Jessica Schulberg.


Will Bunch-ed Panties hormonal devotion to Barack is why he slimed Hillary to begin with.

He's a nasty piece of trash.

As for the increase?

It was acceptable when 15 civilians were killed in a strike?

To Will Bunch-ed Panties, it was.

Reality, those deaths were wrong.

More reality, continuing to prop up a sectarian government is not the answer.

Isaiah's THE WORLD TODAY "The Woods" went up late Saturday.

Let's drop back to Saturday's snapshot for another look at some of the remarks by the Ranking Member on the House Armed Services Committee, Rep Adam Smith:

The only issue I want to highlight and hopefully have the General discuss a little bit as we continue in Iraq the problem to my mind continues to be that the Baghdad government is not inclusive enough of the Sunni population.  Uhm, I met with a Sunni tribal leader yesterday.  Uhm, you know, certainly Prime Minister Abadi is trying whereas Prime Minister al-Maliki did not.  But there's not been much improvement. There is still a feeling amongst the Sunni population that Baghdad is more -- is closer to Iran than it is to their own Sunni population.  And to my mind, until we fix that problem, whatever happens in Mosul, whatever happens elswehre, if you have a disgruntled, dissatisfied, pushed aside Sunni population in Iraq, you are going to have fertile ground for ISIS, al Qaeda or whatever extremist groups want to exploit is.  So I'm curious to hear what we're doing to try and re-integrate the Sunnis into the Baghdad government so that it is not a Shi'ite sectarian government but a government for Iraq. I think that will be a great challenge going forward.

That's been the (never met) goal for over a decade now.