Ratings for THE WALKING DEAD finale 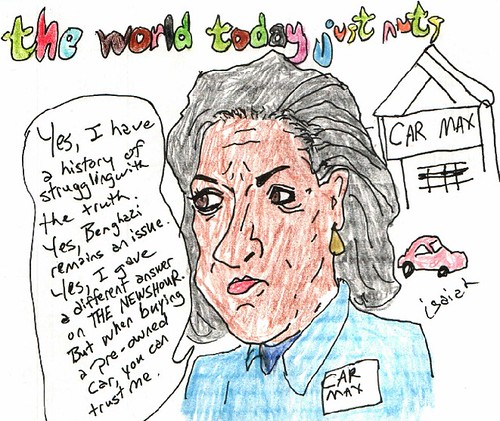 
So THE WALKING DEAD.

It hit a new low for its finale.

Sorry, it wasn't due to competition.

The ratings have been sliding on it for some time.

It's in part because Gail Ann Hurd's whining.

'I told my daughter that watching without paying is stealing money from us.'

Hurd's wealthy and she looked like a pig, a greedy pig.

Those remarks were a few years back but they haunt her and people are sick of her.

Who cares if a fan posts some of an episode -- or all -- to YOUTUBE?

She got paid by AMC.

And her whining just makes people not want to watch the show.

In Gale Ann Hurd's world, no one is poor.

No one goes hungry.


She really looked like a greedy pig and that's on her.

Wednesday, April 5, 2017.  Chaos and violence continue, The Mosul Slog continues, the Iraqi government continues to tell civilians in Mosul to remain in the city and much more.


In shocking news, Janine Jackson has emerged from her coma.

It's been an 8 year coma which kept her from speaking out on the Iraq War.

Then came the coma.

Some say it was self-induced.

What is known is that, freed from the desire to look away in order to protect Barack Obama, Janine has finally returned to the topic of Iraq.

And who better to speak to them my BFF Raed Jarrar aka Jar-Jar Blinks.


JJ: Well, if I can put it very crudely, the media assessment, or the assessment that you would take from media in the wake of the Mosul airstrike, is that civilian deaths are sad but unavoidable, especially because of ISIS and their methods. And the takeaway is, we can only hope that in the end it will have been “worth it.” The damage and the harm from attacks like the one that we just saw, in other words, is not ignored, but it stands itself as justification for further attacks. And so one hardly knows how to intervene in that logic loop, if the goal is really to stop the dying.

RJ: I would intercede with two points. The first one is that the level of civilian casualties to US airstrikes, and to those forces supported and aided by the US, might actually reach to the point of war crimes. So we’re not just talking about a tactical difference—you know, we’re offending some groups. The US apparently has changed its rules of engagement in the last few months, and this came after promises by President Trump to take the gloves off against ISIS. And he said that we have been “restrained,” we have to take it all the way. So there is an intention there to start bombing more and to disregard civilian lives.
And under international law, these principles of proportionality and distinction are not optional; it’s not an issue that a president can decide to tweak for political reasons. So that’s my first point, is that the US might have been engaged in war crimes in the last few weeks because of the unprecedented level of civilian casualties in Syria and in Iraq, where hundreds of civilians are being killed by airstrikes by the US, in what seems to be a new pattern of US engagement.
My second point is that I completely disagree with the premise of what’s going on in Mosul. So if you were to listen to mainstream media in the US, or to the US government, what’s going on is supposedly a liberation of Mosul. That’s why any price should be given for this liberation of Mosul from this pure evil group, because at the end of the day, supposedly, we’re getting all of these Iraqi civilians liberated.
And I disagree with this premise, because what’s going on in Mosul is nothing more than a handover between one sectarian and violent militia, called ISIS, to another sectarian and violent militia, called the Iraqi government. Civilians in Mosul are not being liberated; in some cases [there is] worse treatment by the Iraqi government and militias affiliated with the Iraqi government. Human Rights Watch issued a few reports in the last few years. One of them is called “After Liberation Came Destruction,” and in that report, Human Rights Watch documents how Iraqi forces, aided and funded and trained by the US, committed systemic war crimes in areas that they took back from ISIS, including ethnic cleansing and rape and torture and extrajudicial killing. We’re talking about the same level of violations committed by ISIS.

So there is no liberation going on there. Iraq is not getting to a point where we’re opening a new page. What’s going on now is exactly another step, a continuation of the destruction of the country.

I still have the e-mails, the ones where you swore you'd call out Barack.

But you never did, Jar-Jar.

You were a good little foot whore in the march to deceive the people.

All those years of silence, where did they lead to?

To the very thing you're now appalled by.

It's a damn shame you were nowhere to be found when it mattered.

Oh, he would show up on, say DEMOCRACY NOW!, where he and Amy Goodman would find a way to discuss the Iraq War without ever mentioning Barack.


And during such appearances, he would make clear that he didn't know a damn thing about what was going on in the country.


For one example of that, see "TV: A week of putrid and puerile."


After 8 long years, our prodigal children Janine and Raed return and we're supposed to be grateful?

I mean, if Donald Trump gets voted out in the 2020 election and a Democratic becomes president, are you going to whore and lie again?

Of course you are.


That's why can't trust you.

You made that clear for eight years.

It's good that Raed can call out the militias.

But there's the reality that they're acting on the will of the Baghdad-based government.

Yes, we are seeing sectarianism.

But that's a result of the Shi'ite dominated government which has refused reconciliation repeatedly.

Raed doesn't get that what we've done -- and are doing now -- is propping a government that has no legitimacy with the people.

We have chosen sides while pretending that we're defending the Iraqi people.

Tell you what, Raed, you learn to talk about that?  I'll stop bitch slapping you for the last eight years.  Until then . . .


Sounds like a good place for Diana Ross' "Until We Meet Again" (first appears on her album EVERY DAY IS A NEW DAY).

At what point do we speak up?


On March 26, the Iraqi government officially announced it favors the idea of some US forces staying. Prime Minister Haider al-Abadi said in a Fox News interview that he supports retaining enough US troops to support Iraqi forces in a post-IS Iraq.
"We are concentrating on training, logistical support, and intelligence cooperation and gathering; these are three important elements for which I think we need some US troops to stay in Iraq to continue the task," he stated.
It appears that parliament's Security and Defense Committee has information that work has already begun on some US bases. Committee member Majid al-Gharawi told Al-Monitor, "The US troops, present in Iraq in rising numbers each day, are meant to stay in Iraq." Gharawi, a political representative of the Sadrist movement, not surprisingly opposes the idea. "American forces in Iraq will be met by resistance at the hand of Iraqis. Any foreign military presence on Iraqi soil will not be tolerated," he said.
Jaafar al-Moussawi, the spokesperson for Sadrist movement leader Muqtada al-Sadr, concurred. He said, "Any continued presence of foreign forces in Iraq, whether they are American or not, without agreement by the Iraqi parliament is considered an occupation. Hence, it will face resistance by the Sadrist movement or the rest of Iraqis, as the movement's stance on a US presence hasn’t changed."

Again, when do we speak out?
After the bases are built and stationed?
Meanwhile, Tikrit is slammed with bombings.  AL JAZEERA reports, "Dozens of people have been killed in a series of attacks in the northern Iraqi city of Tikrit, according to security sources.  The overnight attacks on Wednesday came after several suspected ISIL fighters infiltrated Tikrit, around 170km north of the capital, Baghdad."  AP counts at least 22 dead while REUTERS counts 31 and BBC NEWS offers, "A doctor at the city's hospital told the BBC that 34 people had been killed and 46 others wounded, many of them civilians."
It's day 170 of The Mosul Slog.
Day 170.
And what's being done?
AFP reports:

Iraq's military on Wednesday urged residents to shelter in their homes in jihadist-held areas of Mosul, where its bid to oust the Islamic State group has taken a heavy toll on civilians.
Iraqi forces are battling to recapture west Mosul from IS, killing and wounding hundreds of civilians and pushing more than 200,000 to leave their homes.

The government has encouraged residents not to flee during the fighting -- a policy aimed at easing ease the burden of widespread displacement but which can heighten the risk of injury or death for civilians.

They refuse to create a corridor for safe passage to get the civilians out of Mosul.

The Mosul Slog is not about helping Iraqi civilians.

That should be clear by now.


The editorial board of THE KANSAS CITY STAR offers:

Protection of the innocent in war time is a marker of civilization itself — a concept so central to international law and the ancient “just war ethic” our laws and norms grew out of that it has been recognized across the millennia.
So we can hardly be complacent about the unacceptable number of civilian casualties caused by drone strikes under President Barack Obama.
Or about evidence that a growing number of noncombatants have been killed in even more aggressive airstrikes in Iraq and Syria since President Donald Trump was sworn in. There were 1,000 such deaths last month alone, according to the U.K.-based monitoring group Airwars.