I made it to the end.  Probably should have ditched it long before that.

The book is beyond boring.

If you're hoping to read even a hint of the rumors that, as roommates, Jimmy Stewart and Henry Fonda 'helped' each other out and/or had a serious love affair, forget it.

If you're hoping for any excitement at all, forget that too.

Jimmy Stewart's life could not have been as boring as the book makes out -- no one's life could be that boring.

It really reads like a filmography padded out with a few dull details.

We do learn that he was friends with Ronald Reagan and that he was a Republican -- which might shock fans of IT'S A WONDERFUL LIFE -- especially in this climate where so many on my side (the left) insist, "They're dead to me" -- about any performer who doesn't feel exactly as they feel.

Along with IT'S A WONDERFUL LIFE, Stewart's other big films would include THE PHILADELPHIA STORY, VERTIGO, REAR WINDOW, BELL BOOK AND CANDLE, ANATOMY OF A MURDER, THE MAN WHO KNEW TOO MUCH, AFTER THE THIN MAN, ROPE, MADE FOR EACH OTHER and DESTRY RIDES AGAIN.

VERTIGO, one of his best films (it and THE PHILADELPHIA STORY are his two great films), really was the winding down line for the actor though he continued making films for many more years.  (By 1960, the films would all be mediocre or outright bad -- my call).

But there's nothing there in the book.

Eliot tells you he took her on a flight and she criticized the whole way.

She and Cary Grant were both trying to bed Stewart on that film as was director George Cukor.

That's all absent from the book.

Basically, Stewart is a little virgin who finally got married over a decade after stardom and never strayed, nor did he ever have any real problems.

Good for him if his life was that uneventful but it makes for a lousy read.

The author doesn't even talk about 'pollution' or whatever it was that Stewart called it.

Again, that well told -- and oft told -- story is among the many that the book ignores.

Wednesday, February 21, 2018.  Another US service member has died in the never ending war.

Next month, the Iraq War hits the 15 year mark.  Why is the US military still in Iraq?


Soldiers from 2nd Battalion The Royal Regiment of Scotland are two months into their tour of Iraq, helping to train Iraqi and Kurdish security forces 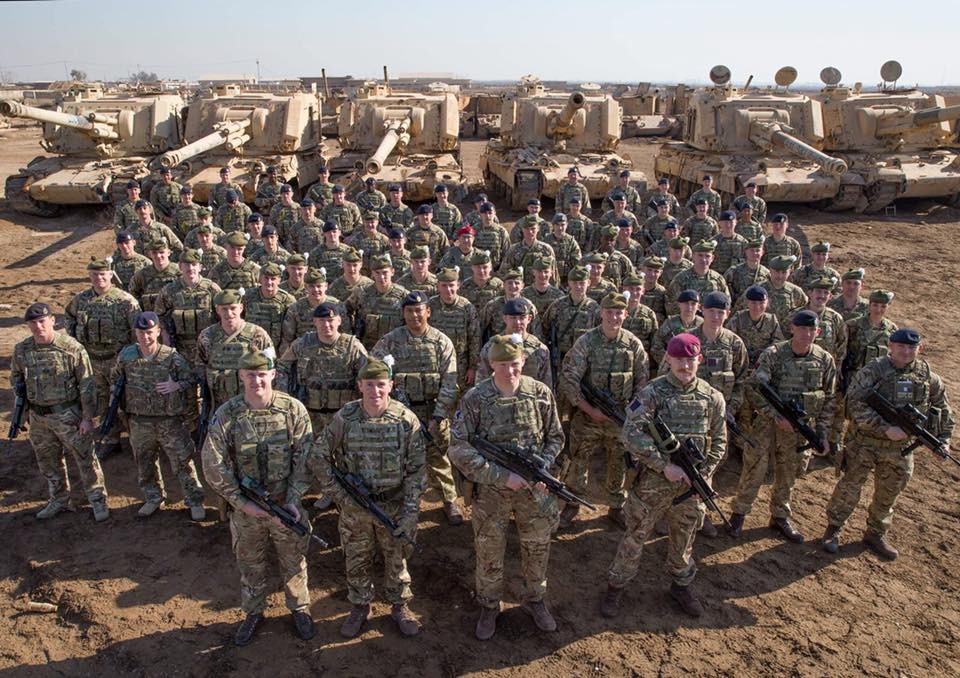 
Looks like there are plenty of other forces who can do the training.

And these other forces aren't the targets of ire and threats.


The US administration is facing growing pressure to withdraw its forces from Iraq, while Washington has been trying to get more forces from NATO member states for deployment in the country with the aim of providing “training” and “advice” to the Iraqi armed forces.
According to Press TV, Hadi al-Ameri, a senior commander of t Iraq’s Popular Mobilization Units (PMU) has told in an interview, on Tuesday, that now Daesh (IS) has been defeated in the country and there is no need for the presence of US troops.
He was quoted saying, “We are told that the presence of US forces in Iraq is on the request of the government in Baghdad. We are yet to get a clear statement from the government regarding the number of US troops which is said to be a large number.”


Again, why is the US military still in Iraq?

When does this war ever end?

Again, another US service member has died in Iraq.

From the US Defense Dept:

The Department of Defense announced today the death of a soldier supporting Operation Inherent Resolve.

Sgt. Christina Marie Schoenecker, 26, of Arlington, Kansas, died Feb. 19 in Baghdad, from a non-combat related incident. Schoenecker was assigned to the 89th Sustainment Brigade, Wichita, Kansas. The incident is under investigation.


Kyle Rempfer (MILITARY TIMES) notes, "Schoenecker‘s death is the third casualty of the year for the Inherent Resolve mission. Another American service member supporting the mission died Jan. 8, and a soldier from the United Kingdom died Jan. 31, both of which were also non-combat related incidents, according to DoD announcements."  He also notes that this is thought to be Schoenecker's first deployment to Iraq.  Chad Garland (STARS AND STRIPES) adds, "Schoenecker enlisted in May 2009, according to details provided by the sustainment command. A sergeant since January 2015, her awards include an Army Achievement Medal with one oak leaf cluster and an Army Reserve Components Achievement Medal with two oak leaf clusters."


Meanwhile Matthew Waterman (IDS NEWS) is upset about Iraq -- or upset that the US did not promise millions in grants to Iraq for reconstruction:


The U.S. is by far the country most responsible for the mess Iraq now finds itself in. IS group is a phenomenon that essentially grew out of al-Qaeda in Iraq. Al-Qaeda had virtually no presence in Iraq before the U.S.’s aggressive and illegal invasion of the country in 2003.
We could go back further. The U.S. has been at war with or in Iraq almost without interruption for nearly 28 years. After supporting and arming Saddam Hussein’s regime in its aggression against Iran throughout the 1980s, the Bush administration abruptly turned on Hussein when he invaded Kuwait.
The United States trounced Iraq in the first Gulf War, but that wasn’t enough. The U.S. led the implementation of sanctions the U.N. says killed hundreds of thousands of Iraqi children. President Clinton bombed Iraq repeatedly throughout his term.
The 2003 invasion — the worst international crime of the century so far — imploded Iraqi society and led to hundreds of thousands more deaths.

After all this, for the U.S. to refuse to give Iraq any aid, offering only loans to a government already deeply in debt, is outrageous.


The claim that the Islamic State 'grew' out of al-Qaeda in Iraq is conventional wisdom.  It's conventional wisdom because it lets a great number of people off the hook.  ISIS grew out of Nouri al-Maliki.  Nouri is what split ISIS and al-Qaeda in Iraq -- his actions.  It's actually al-Qaeda in Mesopotamia and while many of its members stayed 'true' to their beliefs -- and carried their attacks over to Syria -- what became ISIS felt the focus should be Iraq where Nouri al-Maliki was persecuting the Sunni population.

Saying it great out of al-Qaeda or the other nonsense that it was because of imprisonment in Iraq?

Those are clever lies to avoid dealing with the reality of what took place in Iraq after Barack Obama gave Nouri al-Maliki a second term as prime minister especially.

The Iraqi people voted in March of 2010 and Nouri lost to Iraqiya.  As US Gen Ray Odierno had predicted ahead of the election, Nouri wasn't going anywhere.  Odierno had asked what happens if Nouri loses the election and refuses to step down?

His refusal to step down brought the government to a halt.

Instead of siding with the Iraqi people, Barack went around the voters and Iraq's Constitution.  The US brokered a legal contract (The Erbil Agreement) which gave Nouri the second term.

His secret prisons and much more had already been exposed in his first term.

But that didn't matter.

They needed Nouri, the US government insisted internally, to finally get the oil and gas law passed.

Now let's point out that the oil and gas law never got passed by the Parliament -- and though they argue Hayder al-Abadi would get it passed when they named him prime minister in 2014, he didn't get it passed either.

But for this reason, they looked the other way as Nouri's abuses mounted and mounted.

Maybe an editorial about that could be written?

As for the US government currently not forking over more millions and billions?

First off, the US has repeatedly installed the cowards who fled Iraq and then agitated outside of Iraq for the US to invade.

So, in other words, Iraq's leading politicians -- certainly the prime ministers -- have been from the group calling for Iraq to be invaded.

They wanted it, they got it.

They're also in charge of Iraq.

As we've maintained throughout this never ending war, the US government providing money to the Iraqi people?

Absolutely, we support that.

Providing it to these corrupt leaders?

Iraq's most recent ranking on Transparency International?  The 166th most corrupt government out of 176 governments around the world.

That's where aid's going to go?

None of it has reached the Iraqi people in the past.

If you think Iraq's a mess right now -- and it is, torn apart by war -- wait a few more years when there are still no jobs for those young people.

Iraq is a rich country thanks to oil.

But the people live in poverty.

In fact, when the Arab Spring almost overthrew him, he begged for 100 days to address corruption and this led to protesters leaving the streets.

He had nothing to show for it and didn't care at all.

They say a lot.

They do damn little.

Hayder says he's fighting corruption.  He's said that since the fall of 2014.

Nothing to speak of though, elections coming up in May, he has recently been grabbing headlines for claims of addressing it.

Ryan Crocker's back in the news.

I found this blog very informative; I have gone through your periodic updates on such topics. Your effort is highly appreciating. I too have a small effort seeking a few supports from domains like you. For backlink exchanges or post related concerns if you have any guest post needs, you can check here with us:
Visit: https://wizbloggers.com/write-for-us/