And I care why?

For those who don't know, Murphy created the smash hit GLEE, the bomb THE NEW NORMAL (a sitcom), the currently airing AMERICAN HORROR STORY and FEUD.

I'm not saying he hasn't done well in the past.

I'm just first off saying that, like Shonda Rhimes, he's probably got a few bombs coming up.  (Not surprising, Shonda's also signed with NETFLIX.)

How does this help their service?

Did you hear?  They just cancelled DISJOINTED.

Ryan's not going to be bringing any series of classic films.  When Disney takes all their product over to HULU, NETFLIX has even less films.

Who the hell's going to watch?

SENSE8 was fantastic and they cancelled it.

Enough pushback means they were forced to give us a two-hour wrap up.

Why should we bother with NETFLIX if they're just going to cancel the shows we love?

So a TV content creator is signed to NETFLIX.

Who the hell cares?

NETFLIX needs to get its act together.

For Iraq, this week's big focus has been Kuwait.


The US State Dept released the above video with the note, "Secretary Tillerson poses for a "family photo" with ministers attending the Global Coalition to Defeat ISIS meeting in Kuwait City, Kuwait on February 13, 2018."

The point of the meet-up was to raise money.

The answer to the first question?


An Iraq fund-raising conference in Kuwait attended by dozens of potential donors was headed for failure on Tuesday, with barely $4 billion pledged — none from the United States. While the conference does not end until Wednesday, the message was clear: President Trump is leaving nation-building to others, and they are barely responding.
It was a humiliating blow for the Iraqi government, which cannot possibly afford a fraction of the reconstruction cost for a war that was, in some ways, an outcome of the 2003-2011 American-led occupation.


"A humiliating blow for the Iraqi government."

Hayder al-Abadi, so promising and wonderful insist paid whores for the US State Dept but those are just words -- usually on the pages of NYT -- and they have no meaning at all as demonstrated by the refusal of so many to donate.

Kuwait, for instance.  Some outlets give it credit for donating $2 million.  Uh, no.  It gave a million and it's loaning a million.

An observation on the way the money's being handed over?

So far most of the money for Iraq is not simple donations. They come as loans and potential investment. Looks like no one is ready to hand Baghdad free check while Haider Abdi still punishes Kurdistan and hinders it’s development.

CNN serves up some misinformation.

The reconstruction and recovery money would go to areas that had been seized by ISIS, including the country's second-largest city of Mosul cnn.it/2ErsKyV

CNN knows damn well better.  They could have typed "should go" or "is said will go."

But Iraq is corrupt, ranking among the most corrupt governments on Transparency International's index.

There is no way of being sure that any money will "go to areas that had been seized by ISIS" -- in fact, if corruption weren't so great in the Iraqi government, no one would need to beg for money to begin with.


In the FRANCE 24 report above, Joost Hiltermann (International Crisis Group) observes that there is "pervasive corruption that makes it very difficult for the Iraqi government to effectively do reconstruction in many areas.  A lot of money just simply disappears."

When that's who you are, when that's your reputation, you're always going to struggle in motivating people to give you money. 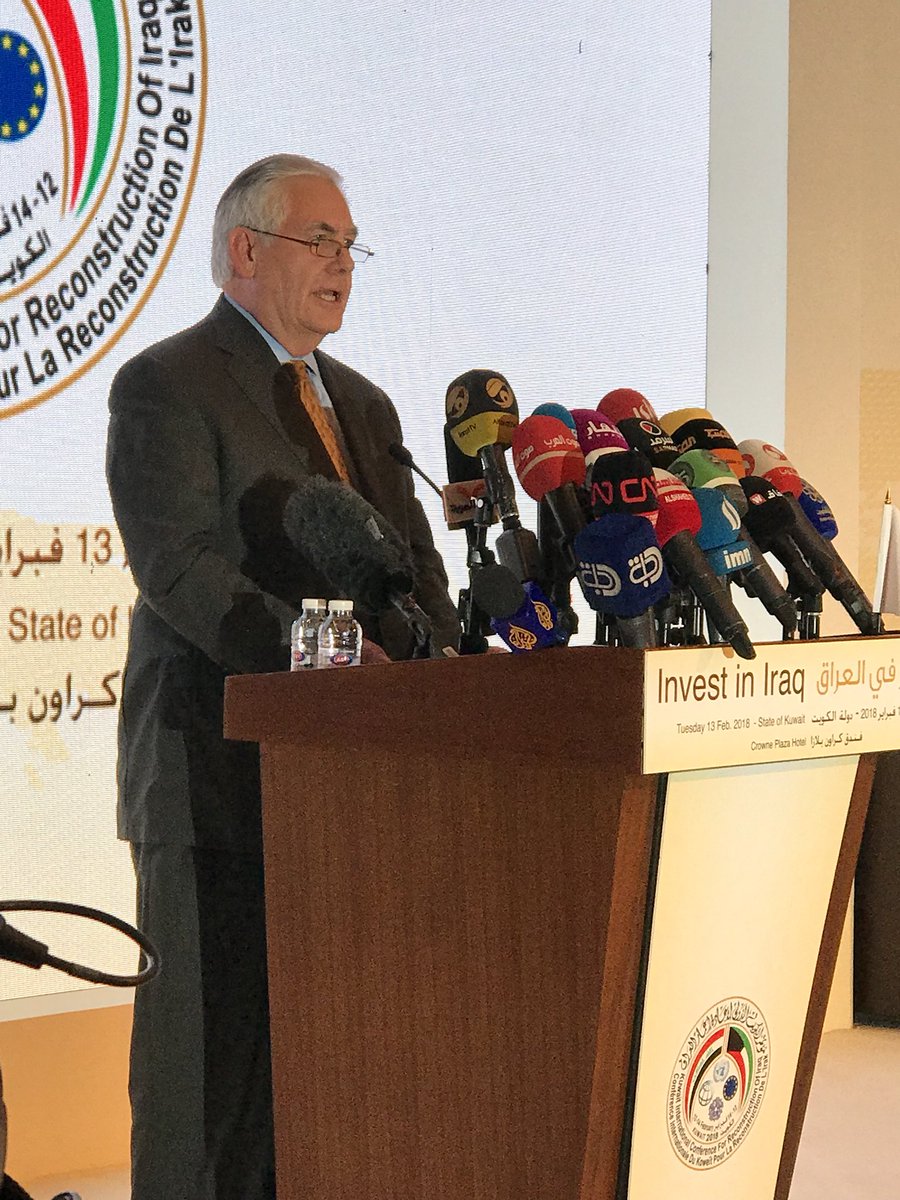 
The need states ahead of the meet-up was $88 billion with some anticipating a possible haul of $100 billion.

That did not happen.

There's a fundamental misreading of the #Kuwait conference going on right now. #Iraq did not expect or ask to raise $88bn from donors today. 1/

$88bn is the amount that the World Bank assessed Iraq will need over the next 5 years to rebuild. The government budget will form the bulk of that money, followed by private investment. Donors are seen as an added boost, not the bulk. 2/

$4bn in donor support is enormous given the context. Neither the #Iraq economy nor the state would be equipped to absorb $88bn in immediate financing, even if it were to exist. 3/

Just looking at top line figures also misses the fact that conference was meant to "introduce" global companies to Iraq and put guarantees and incentives in place, so private finance flows in longer term. Small biz deals could prove imp tomorrow than $1bn in cash today 4/

For context, the biggest donor conferences in recent years have drawn in $10bn to $15bn. Comparing numbers today to $88bn is just silly.

Not true. Iraq can barely balance its books right now and can not save a penny for reconstruction. Abadi was very clear in his expectations from this conference. If Iraq can cover 90+% of the costs anyway then this conference would not even be worth all this humiliation.


Now to the second question, "who has paid for it all along?"

"Reconstruction" was the removal of Saddam Hussein.

Don't pretend that the prime ministers of Iraq since the US-led invasion hasn't been made up of cowards who fled Iraq.

They fled Iraq, too scared to fight Saddam.  They fled and then agitated for foreign intervention.

They promised that troops -- foreign troops -- would be greeted as heroes.

Their motive was to overthrow Saddam Hussein so they could install themselves.

Which is what they did.

They are cowards and, like most cowards, they governed through fear -- which led to the abuses and crimes.

Foreign governments have been 'donating' to these corrupt officials all along.

It is past time that Iraq was ruled by non-cowards.  Past-time that a leader came up in Iraq, not in discussions in the Oval Office.

Yesterday, the editorial board of the Pittsburgh Post-Gazette observed:

Iraq now faces two serious hurdles to future progress. The first, to be addressed in a donors’ conference in Kuwait, is some $100 billion that it seeks for reconstruction after the various wars. The second is national elections, to be held May 12.
Pledges at the Kuwait conference are problematic. The United States is reportedly not planning to increase the aid it already provides Iraq. Previous big donors, the Sunni Islam states of Saudi Arabia and the United Arab Emirates, are taking the position that they have other fish to fry. Their real problem with Iraq is that, through Iraq’s majority Shiite Islamic faith, it has fallen too much under the sway of Shiite Iran. There is also an active Iranian military presence in Iraq, left over from the campaign to take Mosul back from the IS.

The May elections are another question altogether. Prime Minister Haider al-Abadi sought to stitch together a political “Victory Alliance,” based on his Popular Mobilization Forces. However, there quickly spun off another Shiite-based, Iran-supported group, the “Conquest” list, formerly part of the PMF that Mr. al-Abadi had been working through. The political picture is further complicated by the appearance of a new “Wisdom Alliance,” led by Shiite clergyman Ammar al-Hakim. All in all, the campaign promises to be a real jumble, with Mr. Abadi’s ultimate fate uncertain.

On the issue of the Islamic State, it's not gone.

Yesterday in Kuwait, US Secretary of State Rex Tillerson declared:

But the end of major combat operations does not mean that we have achieved the enduring defeat of ISIS. ISIS remains a serious threat to the stability of the region, our homelands, and other parts of the globe. Without continued attention on the part of coalition members, we risk the return of extremist groups like ISIS in liberated areas in Iraq and Syria and their spread to new locations.
Each of us must continue our commitment to the complete defeat of ISIS. Maintaining stabilization initiatives is essential in this regard. If communities in Iraq and Syria cannot return to normal life, we risk the return of conditions that allowed ISIS to take and control vast territory. We must continue to clear unexploded remnants of war left behind by ISIS, enable hospitals to reopen, restore water and electricity services, and get boys and girls back in school.


THE LATIN AMERICAN HERALD TRIBUNE notes, "US Secretary of State Rex Tillerson said on Tuesday the Islamic State terror organization was not yet fully defeated and continued to pose a danger to the region, despite losing 98 percent of its territory in Iraq and Syria, in a speech broadcast on Kuwaiti state television."