Any bets on the drop off for next weekend?

THE GREATEST SHOWMAN?  I raved over that movie, it's great.  But I also remember people -- especially critics -- acting like it was a box office failure.  They didn't seem to realize that the film had legs.  Nine weeks later, it's still in the top ten and has now made over $150 million.

FIFTY SHADES FREED goes out a successful end to the triology.  It will probably top off around $92 million domestically.

THE POST will be gone next weekend.  It's done horrible business and there's no way Meryl's getting the Oscar.  There's nothing to keep it in the top ten.  Of 'quality' films, THE POST remains the worst film of the last 12 months.

JUMANJI remains the story of 2018.  No one could have guessed it would make this much domestically before it was released.

I reviewed it and I loved it.  But I wouldn't have guessed it would have made even half this much.

JUMANJI is a force of its own now.


Monday, February 19, 2018.  Mere weeks away from the 15th anniversary of this wave of the never-ending Iraq War.


I was on the phone earlier with a friend.  We both know Patricia Arquette and are amazed at her Russian scare mongering -- appalled actually.  I said, "Well Rosanna's not stupid."  He checked.  No, she's not.  I have no idea why Patricia's decided to jump off the cliff but she's on her own.  Increasingly on her own.


(Also, it's very insulting to her late brother for Patricia to present Billie Jean King as the brave voice.  There is the reality of Billie Jean -- lesbian her whole life and in the closet long after she admits to today -- and there there is the myth of Billie Jean.  Patricia's too old to fall for the myth.)


The violence never ends in Iraq (if Patricia wants to check in on that any time soon).


And there's the attack today on Iraqi forces:


Who was behind that attack?

ISIS says they were.

And it must be true because the media's told us that as well!!!!

Are you still that naive?

As Iraq War vet Mike Prysner explained on LOUD & CLEAR over the weekend:

There are two sides to this.  There's the preparing and the priming for war and all the propaganda and lies and all of the things that the media does to prepare people for that initial attack and [. . .]  But then when the war starts there's this whole other part of the of masking what's really happening, masking the war on civilians, masking the mismanagement and poor planning of the war makers and of course this happened with the Gulf War and with the invasion of Iraq that I was a part of in 2003.  I think that the US empire learned a lesson from the Vietnam War because if you look up footage of the Vietnam War, you'll see that journalists were on the front line, the evening news was showing front line reporting, showing destruction of civilians and the death of and the serious wounding of US soldiers.  And the US empire learned a lesson from that because that stimulated so much anti-war activism in the United States and in the military because people were seeing a first-hand look at what was going on every single day.  And with the Gulf War they made a very specific effort to conceal that.  To be a military reporter there you had to be approved by the government, you had to go through all types of vetting and they were only allowing journalists embedded with soldiers who were approved and who were going to show positive coverage.  And the same was true with the invasion of Iraq.  And I remember one of the things that, you know, I think one of the first times that me and my friends there started to get really angry at the media.  You know we hadn't seen newspapers or news for quite some months but when we finally saw a news report it was just a news report about a rocket that had hit the side of a building and it was just like this kind of endless loop footage of a hole in the side of a building.  This was the reality that we had been dealing with day in and day out -- that was a daily or nightly occurrence for us.   And we realized that people back home had absolutely no idea what was happening in Iraq.  That the politicians were saying everything's going fine, yes, we have to report on this or that death when it happens but overall it's going well.  But what we were seeing was just the opposite -- that every day was getting worse and every day was becoming more and more of a disaster and so this kind of extreme need to conceal from the public what's actually going on as the plans are falling apart or as the plans are working and are getting more and more destructive and horrible for the people that they're going after. We felt completely betrayed by the fact that the people we were supposed to be serving back home weren't allowed to know the true extent of what was going on.


As we have repeatedly pointed out, it wasn't just the Judith Millers responsible for getting us over there, it was also the liars -- The Go-Go Boys of  the Green Zone -- that kept us there.

And the lies never end.

Like the corporate media's need/desire to do the US State Dept's work for them and pimp the lie that ISIS is defeated in Iraq.

That lie benefits Hayder al-Abadi who faces an election May 12th and who has damn little to show for four years as prime minister.

So the corporate media repeats it even though events on the ground -- which they largely ignore -- beg to differ with that claim.

#Iraq tightens security on borders with neighboring countries over IS threat 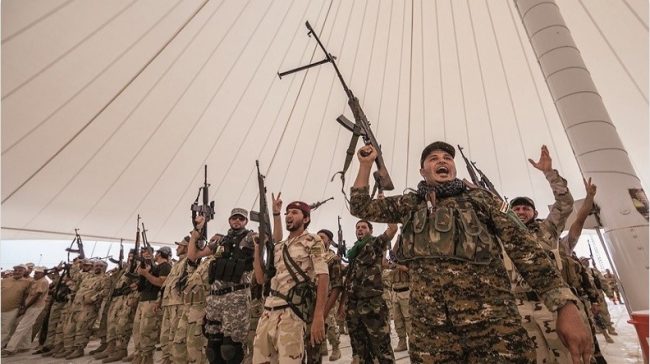 
No, that's not something you do when ISIS is defeated.


And let's talk about something else the media did.

I believe it was 1972 when one of them finally came in second for the week.  Prior to that, they were all the number one program for their week.  It reminded people that US troops were in Vietnam.  For some that was good, for some that was bad.  It was these specials that led to it being labeled "Hope's War" -- and that wasn't a good thing.  He faced booing from the troops in one instance, in another, in the US, he insisted it was "a beautiful thing" the war even if it did cost American lives.  He later insisted he was misquoted and said he was suing.  But he never did sue, did he?


In fact, the most honest moment may have been when Bright Eyes performed "When A President Talks To God" on THE TONIGHT SHOW WITH JAY LENO May 2, 2005.

The Iraq War continues because it's sold over and over, because the corporate media conceals it, because so-called peace activists only care to rail against war if a Republican's in the White House, for so many reasons.

Next month, the Iraq War, this wave of it, hits the 15 year mark.

But it's okay, Patty Arquette's obsessed with defending War Criminal Hillary Clinton and that's what really matters -- at least in a world that's as full of s**t at Patricia herself is these days.