Ruh-Row, JOKER wasn't number one for the weekend 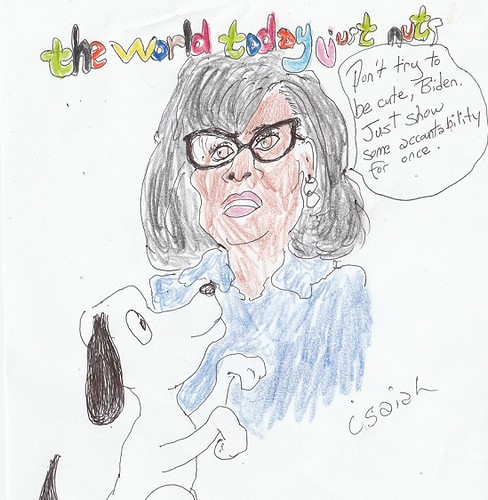 Early Saturday morning, you may remember, reports were insisting, based solely on Friday night, that JOKER was going to be number one, it was going to reclaim the spot from MALEFICENT.  Didn't happen.  Maybe next weekend, don't predict, just report.

What I find interesting is how quickly ZOMBIELAND: DOUBLE TAP is fading.  It never made it to the top two spot and now you see THE ADDAMS FAMILY passing it when AF has been out longer.

My big question?  Who are the idiots who spent about $1.3 million a day on tickets this weekend to see GEMINI MAN?  What did they do?  Tell themselves, "I know everyone hates this movie and has for weeks now but, you know what, I'm going to not just give it a chance, I'm going to throw some money at it."  Those people?  They're the ones I want on my jury if I'm ever on trial.

I didn't realize I had the top 11 and not the top 10.  But that's fine.  Let's look at DOWNTON ABBEY.  It made $1.9 million over the weekend.  Do you think it can do that for a few more weeks?  It's about 7.7 million dollars away from the one hundred million mark.  I'm asking because I'm wondering if it can reach -- or even pass -- that mark?  In the days of the 90s, when we had healthy cinemas -- meaning first run and the discount theaters -- it could probably have counted on another five million in a month of playing dollar theaters.  But those days are gone.  I would love to see it reach the one hundred million mark but even if it doesn't it has already done better than most expected.

By the way, those figures are from THE NUMBERS. I had been using BOX OFFICE MOJO, however, in the middle of last week, they merged with IMDB PRO and now (a) the website looks like crap and (b) most of the features they had are now behind a paywall.  So I'll be using THE NUMBERS instead.

Monday, October 28, 2019.  Joe Biden's disaster decisions have had longterm impact in the US and in Iraq.


Last night, 60 MINUTES did another softball interview with Joe Biden.  If Norah O'Donnell can't grasp why her CBS EVENING NEWS continues to struggle in the ratings, somebody buy her a mirror.  She'll find the answer staring right back at her.

On 60 Minutes, Biden says M4A=middle class tax hike. Anyone in the media whose response isn't "won't M4A raise their after-tax incomes compared to what's left after current taxes/premiums/out of pocket costs?" is negligent in their duty to inform the public & part of the problem.
6 replies68 retweets177 likes


As Kate Sullivan (CNN) reported at the end of last week:

Anita Hill said she's "ready to hold Joe Biden accountable" for his role in leading the confirmation hearing of now-Supreme Court Justice Clarence Thomas, whom she publicly accused of sexual harassment nearly 30 years ago.
"Have I forgiven Joe Biden? I'm ready to move on, but I am also ready to hold Joe Biden accountable. Accountability means acknowledging your role in a problem and the harm it's caused. Acknowledging that you have culpability," Hill told CNN's Christiane Amanpour at the CITIZEN by CNN conference in New York on Thursday.
Hill continued: "Giving me clear information that you have made a change and that you are going to do something to make us all better off around gender discrimination."


Not only did Joe Biden not stant by her (or up for her) when he was the Chair of the Senate Judiciary Committee, he's apparently told two Republican senators -- following the Hill-Thomas hearing -- that he did not believe her.  He has not commented on those reports.

Hill-Thomas, for those who don't know, was a huge issue in its day.  It was a turning moment in addressing on the job harassment.  Anita Hill changed the conversation.  It also had a hugely educational function.  First of all, it demonstrated a lesson that news outlets still can't grasp.  You don't win at the end of the week.  People -- especially women -- are going to take an issue and evaluate it and toss it around.  It's not going to end when a hearing ends or because a hearing ends.  Women's longterm response to Anita Hill and the 1991 hearings were felt in the 1992 elections.  "The gender quake." Naomi Wolf may or may not have coined the term, but she certainly popularized it. The 1992 elections changed the playing field and women like Barbara Boxer, Dianne Feinstein and Patty Murray would enter the Senate because American women watched an all male Senate Committee deride Anita Hill, attack her and sit silent.  How different that might have been with women on that Committee.

[I am not saying Naomi didn't come up with the term.  I don't know who did.  I know I first registered it in a November 1993 column she wrote for THE NEW YORK TIMES and, of course, she discusses the gender quake at length in her 1994 book FIRE WITH FIRE.]

Joe Biden's history is an ugly history of no accountability.

He refuses to take accountability for his role in putting Clarence Thomas on the Supreme Court -- a move that had a huge, negative impact on the United States, he also refuses to take accountability for his vote for the Iraq War and for his 'supervision' of it (2009 through 2016 under President Barack Obama) and how both destroyed Iraq.  He won't even address the reality of Iraq today.


We shouldn't have to note this but the western press coverage necessitates that we do: Women are participating.  If it's confusing to you -- the photo above -- see the video below. 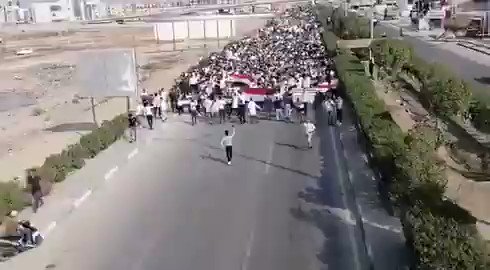 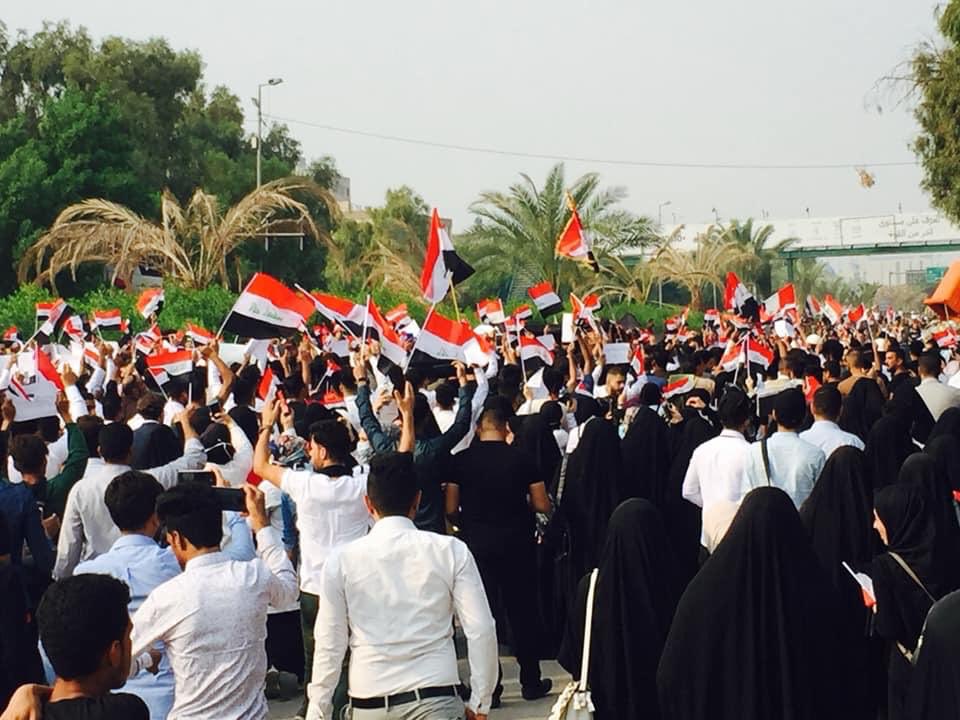 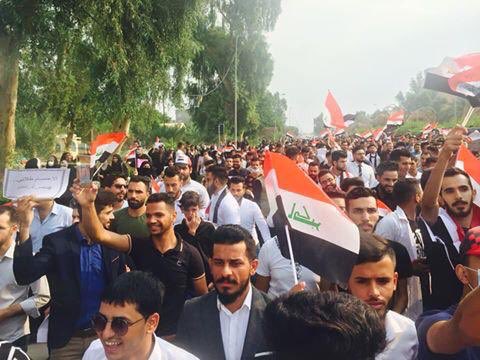 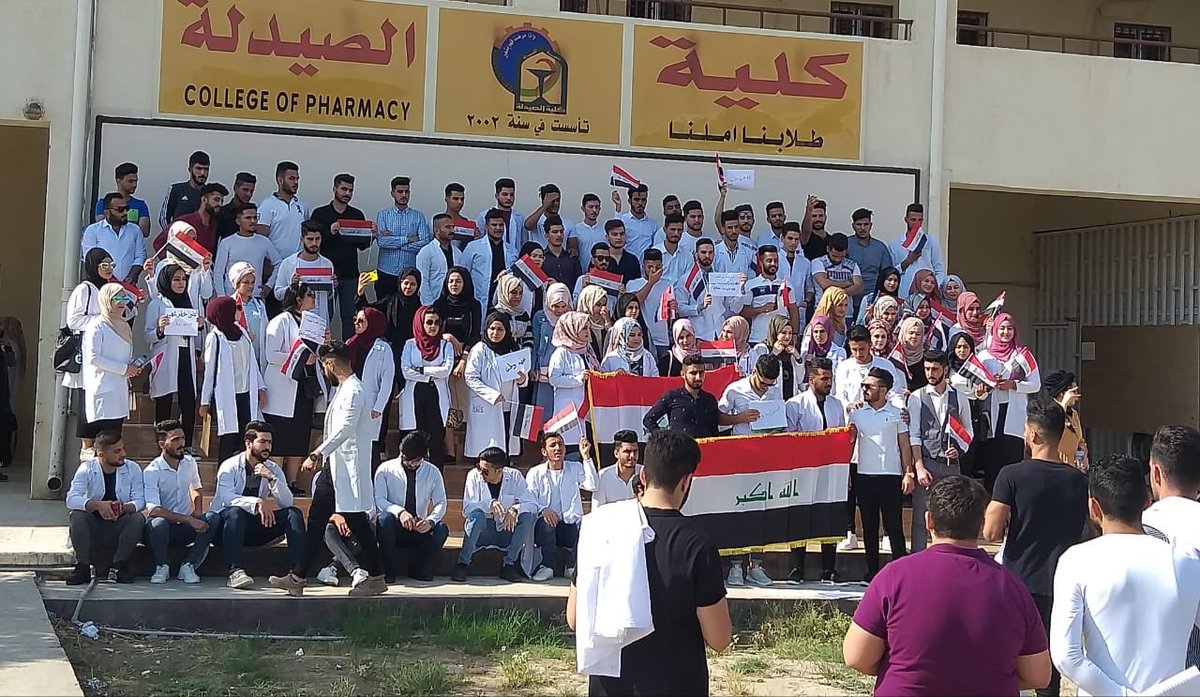 A leading Lebanese newspaper revealed the role played by the US embassy in the October protest rallies in Iraq which turned violent. The Arabic-language al-Akhbar paper wrote on Saturday that it has gained access to a security document that shows the US mission’s role in organizing a secret formation to add fuel to the flames of unrest in Iraq last month.

According to the newspaper, the US embassy has formed a high committee of protests, which coordinated field activities during the protests and the embassy provided it with intelligence and a number of politicians and government workers supported it.


A psychological operations team to guide the media and spread rumors, an electronic mobilization team to lead people through social media, a team, trained in Erbil and Amman, to report on the security services’ mistakes and produce fake news on the protests, a team to exert international pressures on the Iraqi government, to organize protests in front of Iraq’s embassies in foreign states, a team for releasing reports about the protest rallies in cooperation with different media outlets, an IT team to resolve problems related to filtering of the internet and social media, a medical team stationed near the protestors and hospitals to help the wounded and a team to provide logistical support, including food, water and preliminary aid, to the protestors were also formed by the US embassy’s secret committee to foment unrests in Iraq, al-Akhbar added.

For background on FORT RUSS NEWS, go to SOURCE WATCH.  Despite their questionable ties, they could be right.  Anything is possible.  However, it doesn't really pass the common sense test.  If the US government was orchestrating these protests in Iraq -- even just encouraging them -- their would have been immediate press coverage in the US.  But these protests have not gotten a great deal of traction in the US.  For example, 60 MINUTES covered Joe Biden Sunday, not the Iraq protests.  The US government is very good at getting the press to cover what it wants covered.  So if this claim were accurate, we should have been seeing this promoted non-stop the way the Hong Kong protests (or 'protests') have been.

We're not going to play gatekeeper and pretend that this belief is not out there (that the US government is pulling the strings) but we're also not going to toss common sense out the window and pretend like this is what is happening.  It's possible, many things are possible, but it seems unlikely.

An editorial at GULF NEWS notes:

The repression of antigovernment protests in Iraq is an indication of how bankrupt the government has become. While the Iraqi people are starving and desperate for change, taking to the streets to demand the resignation of the government whom they see as ineffective, the government has done practically nothing to address their concerns.

Instead of listening, they have responded with violence — an indication that dissent will not be tolerated in the supposed democracy. Freedom of speech and expression should be a staple of any functioning democracy.

The editorial goes on to falsely claim that women appeared at the Baghdad protests, for the first time, on Saturday.  That's how AP damages everyone when they misreport (see Sunday's "AP strips women out of the coverage yet again").  They have pushed that claim, AP has, and now it is infecting other outlets.


Neither the downpours of live ammunition, excessive – and crippling – deployment of tear gas canisters nor on-the-loose snipers could break the spirit of young Iraqis as they resumed their uprising on October 25 against a regime that has lost all legitimacy in the eyes of the masses.
Men, women and even children from all walks of life have marched to Baghdad’s Tahrir square since the early hours of the morning.

How is that confusing?  It's confusing -- don't know why -- to the ASSOCIATED PRESS.

Friday, on PRI's THE WORLD, Marco Werman spoke with Sinan Antoon (ALJAZEERA) about the protests and Sinan noted men and women -- and women -- were taking part.  That was Friday.  Women did not suddenly begin participating on Saturday, it's just that AP refused to note them until Saturday.

Unbelievable waves of students join today to #IraqProtests. This footage in small city, #Muthanna, the lowest population (1 million) among the rest of the Iraqi cities. seems all its students came out
/>

Largest waves of students join today to #IraqProtests despite the government threat of punishment, The all Hawza religious schools in #Najaf join the protests in solidarity with the students 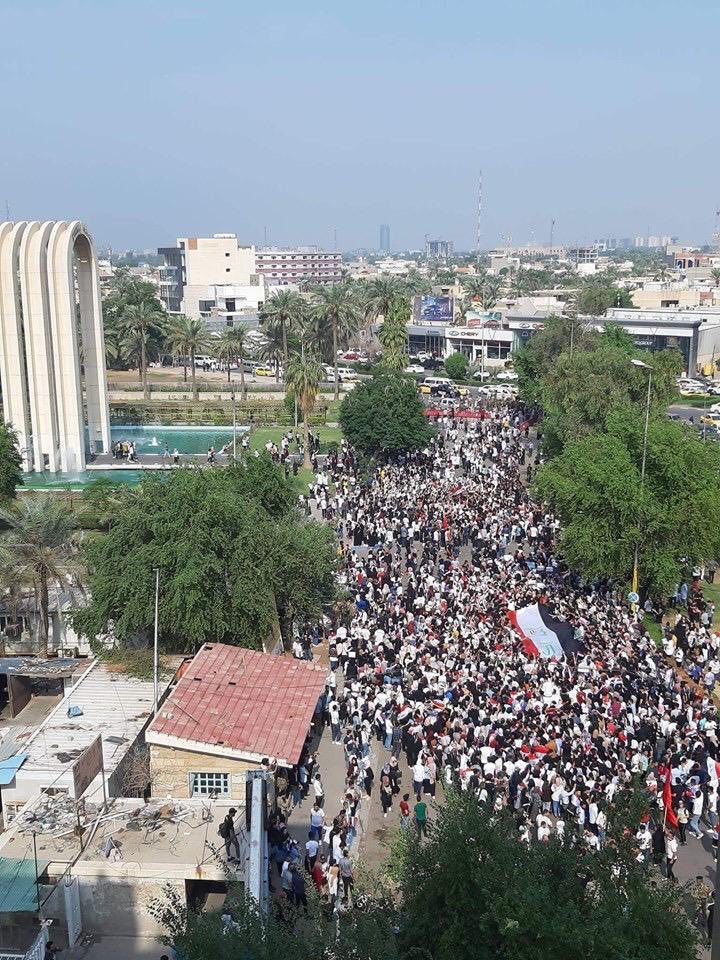 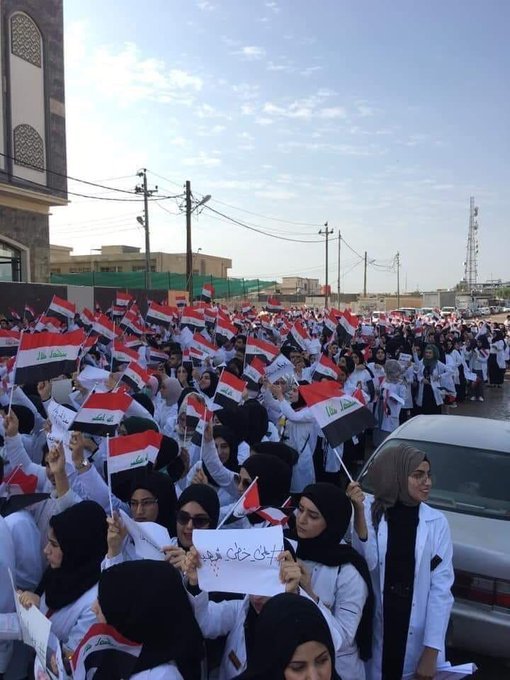 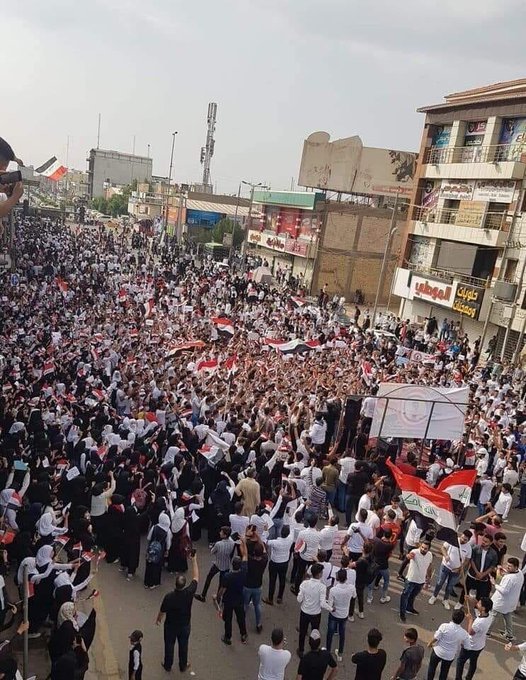 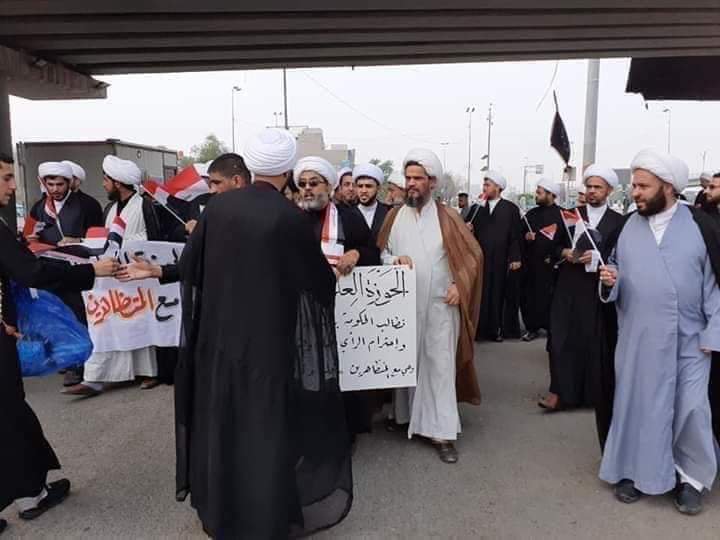 Important statement by @EUAmbIraq on #IraqProtests: Refusal to involve armed factions in the demonstrations, that undermines the right to peaceful assembly & the expression of legitimate demandsand, & calls for a wider investigation to detect who killed the protests 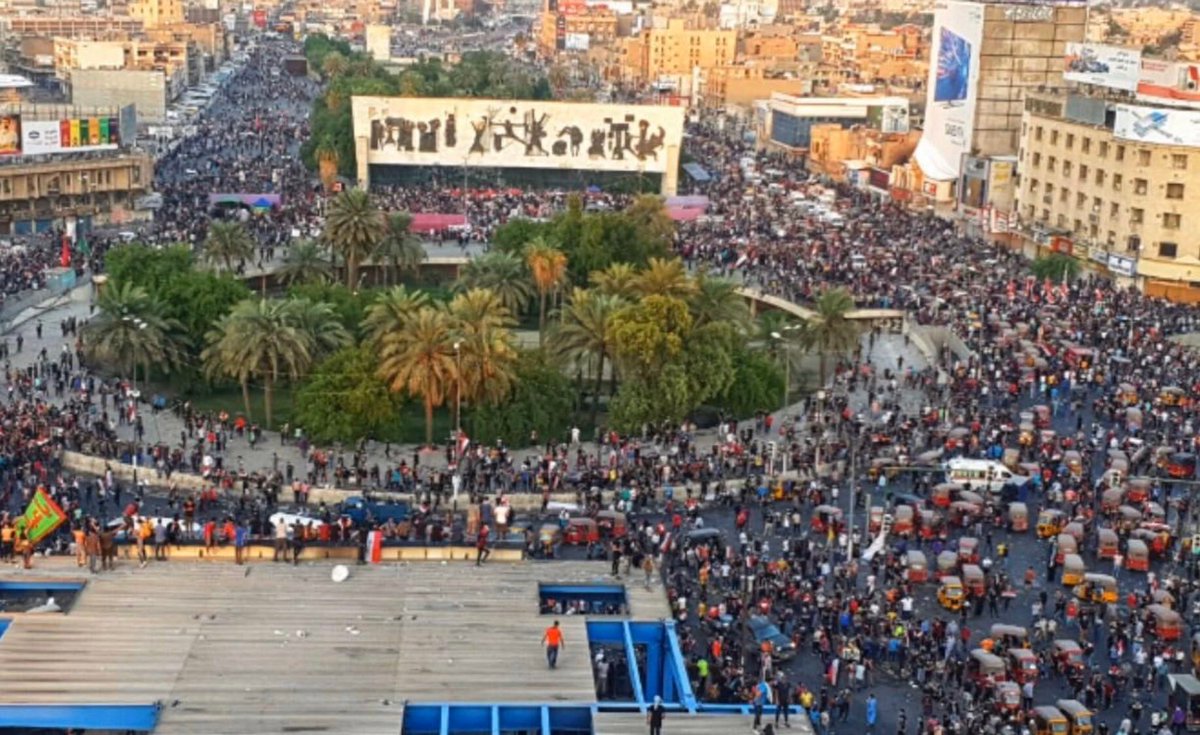 
While we're talking about the protests, let's correct the notion that they started in October.  Western outlets, including AP, continue to make that claim.  Go to the "Iraq snapshot" for Monday, September 30th and you'll see that they started the day before, September 29th.

Academic and observer Balsam Mustafa addresses the protests in a new piece at THE CONVERSATION:


The most recent protests came in the wake of multiple smaller demonstrations by different groups, including PhD graduates, doctors and engineers in September 2019.
They followed government actions that caused widespread anger. Impoverished people were outraged at a recent state campaign to destroy unlicensed properties and market stalls across Iraq, leaving many homeless and jobless.
It also followed the removal of a key general, Abdul Wahab Al Saadi, from his position as commander of the Counter-Terrorism Service, followed by his demotion to a lower post at the Ministry of Defence. The marginalisation of a figure admired for his role in the military campaign against IS enraged many Iraqis.
The new generation want a homeland. “We want a respected homeland,” and “I am taking to the streets to get my right,” were among the slogans on display during the protests. “The issue is not about water or electricity, but about a homeland,” shouted another protester.

The prime minster threatened students not to protest and leave schools, it looks like millennials and Gen Z are notngoing to listen to him , happening now in so many different cities in Iraq

Through out several provinces in Iraq, students are protesting #Iraq