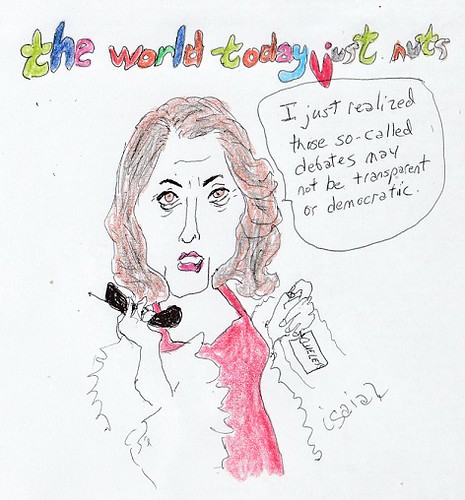 
Next, the box office for the past weekend courtesy of BOX OFFICE MOJO:

So JOKER continues to rule the box office.  GEMINI MAN is a bomb.  No film that costs over $140 million can come in third it's opening week or score only 20 million in ticket sales and be anything but a bomb.  Betty wrote about it so read her "Your diet and depression and GEMINI MAN" which is excellent but I will add that his career's pretty much over -- Will Smith's career.  Most actors have a good run of say 7 years where they have modest hits and blockbusters and then we're done with them.  Some we are done with for good.  Keanu Reeves followed SPEED with a number of films that underperformed and that could have been it for him.  But then he made THE MATRIX and that gave his career a second wind.  You know what idiot turned down THE MATRIX?  Will Smith.  More recently, Keanu's done the John Wicke franchise which has given his career a third wind.

It is very rare to have a Tom Cruise.  There's Joan Crawford and that's probably it for durability besides Tom.  Joan was a leading lady in silent films in the '20s and her film career lasted until 1070's TROG.  Tom emerges in 1983 with RISKY BUSINESS (emerges as a star) and he's remained one. He's had no real down time the way John Travolta has or Will Smith is having.  It's rare for someone to have a long career of successes.  Tom Cruise has had hits in the 80s, 90s, '00s, and 10's and is still going. That's really amazing.  William Powell, for example, was a big star in the 30s and the 40s and by the 50s he was doing supporting roles (HOW TO MARRY A MILLIONAIRE).  Now Clark Gable's career would have probably had staying power were it not for his health (he died after making THE MISFITS) but it's really just Joan Crawford.  You can't even say Bette Davis because Bette was a working actress and took many non-starring roles.  (She also starts her starring run later than Joan -- silent pictures did not use Bette Davis, her voice was made for 'the talkies.')  Tom's got to do a few more years probably to match Joan Crawford's record.


Okay, the DISNEY streaming service, a list has been compiled of what it will be offering from its vault:

Monday, October 14, 2019.  Hunter Biden swears he did nothing wrong and he won't do it again!, Tulsi Gabbard tries to decide whether or not to show up for tomorrow night's debate, and much more.

Starting in the US where the race for the Democratic Party's presidential nomination continues.  Last night Isaiah's THE WORLD TODAY JUST NUTS "Clueless" went up.

In the comic, US House Rep Tulsi Gabbard declares, "I just realized these so-called debates may not be transparent or democratic."  Tomorrow, she is supposed to be one of 12 candidates vying for the party's presidential nomination to take the stage for the latest Democratic Party debate.  But will she be there?

After she (and her supporters) pouted non-stop when she didn't meet the requirements for the September Democratic Party debate, you'd think Tulsi would be rushing to leap onto the stage.  But now she's declaring that she is only just realizing that the debates may not be transparent or democratic.  Just realizing.  After she already took part in two of them.  After she stamped her feet over not being included in the third.  She's just starting to realize that they may not be fair.


She's taken time out from pondering what to do long enough to have a hissy fit -- another hissy fit -- over the press coverage she's receiving.

Cry babies really shouldn't run for the presidency.  If it's not Joe Biden's campaign blubbering about how poorly they're treated, it's Tulsi's campaign.


They really need to grow the hell up.  At least with regards to Joe, he knows he's trying to work the refs.  There's not a sincere aspect to the slamming his campaign does of the press.  They know they're lying, they know they're trying to bully the press.

Tulsi's so, yes, clueless, she may not grasp that.

She's egged on by Michael Tracey and Glenn Greenwald.  Glenn's especially an idiot when it comes to the press (as evidenced by his own inability to handle criticism of THE INTERCEPT).  She is their Tulsi Girl and, damn it, they will not have criticism of her.

She deserves every bit of criticism she gets -- and that's true of all the candidates, but especially her.

The press treated her seriously after the second debate.  And then she opened her mouth.  Repeatedly.

The big 'anti-war' candidate suddenly wanted to tell the world that all War Hawk Joe Biden had done on Iraq was forgiven (and it went far beyond his vote for the war) because . . . Well because she said so!  And damn it, wasn't that enough?  A lazy brained candidate who hadn't done any of the work required was backing up Joe's 'Bully Boy Bush tricked me!' b.s.  If he was really tricked (he wasn't) then you'd think he wouldn't have given Bush an award just last year, right?  He'd be so offended that he'd have skipped that.

But there was Tulsi lying for him over and over.

The press put her on TV, they interviewed for print and the vapid Tulsi had nothing of merit or value to say.

Nothing changed in the weeks since.

She has no issue to get passionate about, she has no plans to present.  In fact, the only time she comes alive as a candidate is when she's ready to slam the press again.

For a politician not to grasp that really goes to stupidity.

Tulsi's got a lot of stupidity on display.

Moving over to Joe Biden.

If you are someone who has raised concerns about Hunter Biden and don’t also raise big concerns about the Trump children, then you fundamentally lack inegrity and don’t really care about building a more moral and less corrupt world.
487 replies8,201 retweets36,365 likes


Matthew Dowd really needs to crawl back into the sewer.

Donald Trump's family is what it is and if you're surprised by that reality where the hell have you been over the last decades.

That's "A."  (B) Since it is what it is, the Democrats need to use that.  They do that by drawing a clear contrast between their candidate and Donald.  (C) As someone who smeared Democrats like Max Cleaveland, you really need to sit the f**K down, Dowd.  The faux ass 'resistance' may embrace you but no real Democrat ever would because of what you did to rip apart so many in 2002.

He and his father are also pretty damn stupid having allowed the issue to gain so much traction before attempting to address it.  Suddenly, Hunter's available for interviews!!!!

ABC News is teasing a wide ranging interview with Hunter Biden that will air Tuesday morning and evening—the same day as the next presidential debate. All but ensures this issue will be the dominant narrative for the former VP as Biden takes the stage.
91 replies117 retweets323 likes

He's walking away from the China money.  Is he?

Not being the financial idiot that Bob Somerby is (he didn't even realize you were paid to sit on the board of the Clinton Foundation), I'm not so sure.  Hunter has stepped off the board.  Well has he gotten rid of stocks in the company as well?  Is he no longer profiting in any way?

There's a world of difference -- when many Americans are outraged about the China deal -- just stepping down from a board for appearance sake and from no longer profiting from the company.  Equally true, he hasn't stepped down yet.  Read the fine print, he plans to -- plans -- on October 31st.  Is that the trick or the treat?


He has the issue also with Ukraine.


Exploiting your father's position in government for personal profit is wrong if your name is Eric Trump, Donald Trump Jr., or Hunter Biden
95 replies193 retweets1,300 likes

Hunter Biden is not a victim here and Democrats are not obligated to defend his conduct. He traded on his family name to score a $50K/month contract with a Ukrainian oligarch.

Point here, Joe Biden was vice president for eight years.  So why would anyone applaud the Tweet below?


Now he's not going to do wrong?  He did wrong for eight years while his father was the Vice President.

Hunter needs to get accountable for that.  What he did was wrong and no one should believe any vague promise he makes today that doesn't admit what he did previously was wrong.

And Joe needs to get accountable too.  He let his brother James and his son Hunter profit from the office of vice president.  That's unseemly.

And if you want to defeat Donald in November 2020, you don't put corruption on the Democratic Party ticket.  It was unethical, it was corrupt.

Joe Biden defends Hunter: 'No one has asserted my son did a single thing wrong except a lying president' 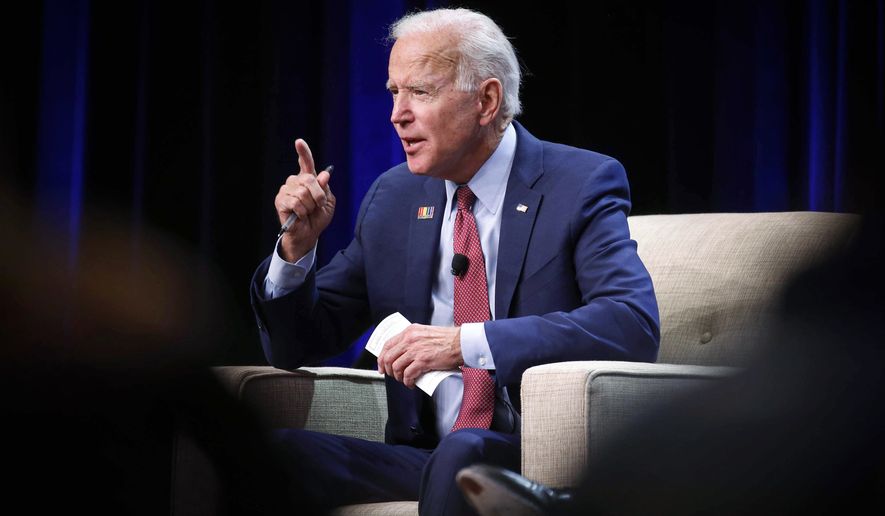 Joe can't stop lying, can he?

He lies and then he lies again.

His campaign has tried to spin this and bully the press into running with Donald's most extreme charges.  Hunter did do wrong.  It was unethical and many of us have noted that.  Donald has repeatedly stated criminal.  There's no evidence available to the public that indicates it was criminal but, yes, it was unethical and, yes, it was corrupt.

Joe's lying about that reality isn't admirable.  He's running for the presidential nomination, not Dad Of The Year.  In addition, these moves of Hunter's only beg the question of what about James Biden?  His brother's equally corrupt.  Where's the promise there?

The country doesn't need this nonsense.  They need a candidate who is a clear contrast to Donald.  The country can get behind an alternative but a pale copy of Donald Trump is just going to give Trump four more years.

Tuesday night, at the debates, does anyone plan to ask Joe and the rest about Iraq?

A woman runs between burning tires in Baghdad, Iraq, during a week of nationwide anti-government protests that led to the deaths of at least 110 people and wounded more than 6,000. More photos of the week: reut.rs/33lZq4S 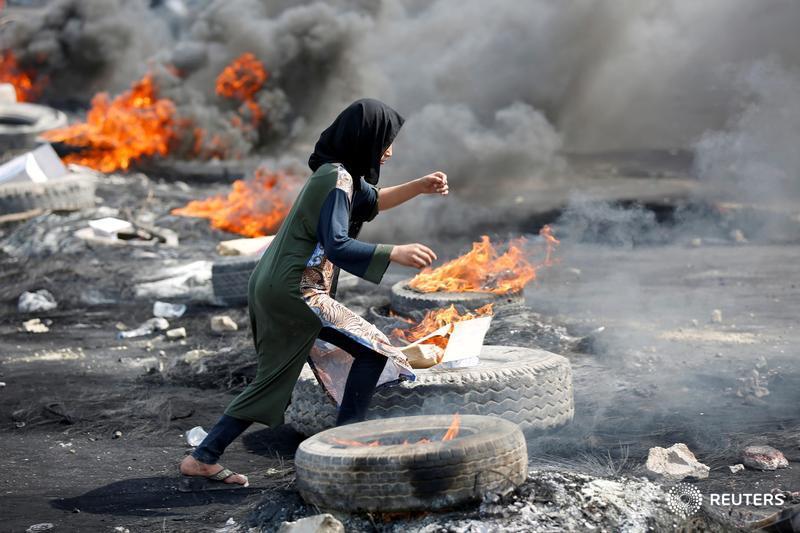 Joe brags that his experience includes being in charge of Iraq for eight years, that Barack put him in charge.  At what point might we see the press start to 'test' that experience by asking actual questions?

Mustafa Salman, born in 1999, went out to protest in #Baghdad, was shot in the head, died from his injuries last night. Medical reports state that he died from a wound to the head


Over 110 people dead.  That doesn't warrant comment from people hoping to become the next president? 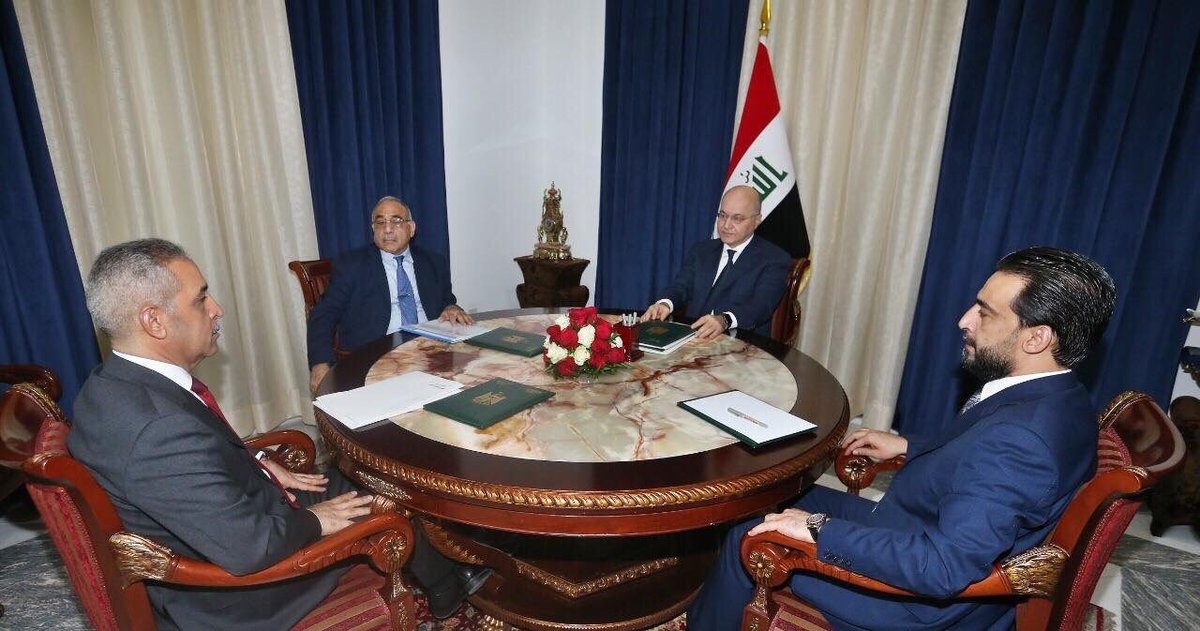 
"The action of the committee and its outputs must be timed, and its results should be respected by all state institutions, in the political, economic, financial, legislative and cultural fields and propose the solutions".
1 reply1 retweet0 likes