I'll be watching.  I figured for the last post I do before the show ends, I'd note the characters who've been on and gone over the years that I liked.

Reade died at the start of this season.  Rob Brown played him for all five seasons.  Reade was great and a great leader.  He and Tasha had real chemistry and the show spent a lot of time teasing that out and keeping us rooting for them to get together.

Before he was the leader, Bethany Mayfair was the leader.  She was played by Marianne Jean-Baptiste played her with just the right mix so you wondered if she was a good character or an evil one.  When she dies, it was a death that really registered.

Nas Kamal should have been on longer.  When Bethany dies, Nas becomes the leader.  Archie Panjabig played her.

Roman was Jane's brother.  He was a great character.  His death was powerful but it shouldn't have happened.  He was too important to the show.  Luke Mitchell who was so great on MARVEL AGENTS OF SHIELD played Roman.

Ellen aka Shepherd was played my Michelle Hurd.  She raised Roman and Jane.  She was also the head of the original terrorist group that Jane battled.  Ellen was caring and manipulative with Jane and Roman.  Hurd made the character a constant surprise and consistent regardless of the plot turn. She probably should have received an Emmy nomination.

And Mary Stuart Masterson should have been Emmy nominated for playing Eleanor Hirst.  I really did not recognize her when she first started on the show -- and like everyone, I've seen SOME KIND OF WONDERFUL, AT CLOSE RANGE and FRIED GREEN TOMATOES -- among other films she's been in.  She really created something different -- from her accent to the way she moved.  It was really amazing.  Eleanor ended up a bad guy.  Probably one of the better ones the show had.

Wednesday, July 22, 2020.  Dario Hunter wants to blame everyone else for his failed campaign and Cindy Sheehan gives him a place to throw a public temper tantrum.

Starting in the US where there's another candidate trying to win the presidency.  Dario Hunter.  The Green Party candidate?  Yes.  He lost that nomination to Howie Hawkins and now is attempting an independent run for president.  Cindy Sheehan spoke with him on her latest CINDY SHEEHAN'S SOAPBOX.  He tells Cindy he's "a fighter."

He tells Cindy Sheehan, "I wanted to take that fight to the country as a whole" -- Green Party issues -- "to ensure to move that agenda, that platform forward."  Really?  He lies so very well, doesn't he?

Gate keepers are in the Green Party, he insists.  He doesn't want to tell the world that, you understand, but "It's a truth that I have to share."  He says he and other Green candidates had to claw their way to get access to the voters to . . .

The Green Party may be all of those things.  Howie co-founded it.  He might have reaped the same backdoor benefits that Hillary Clinton did in 2016.  He might not have.

He was a lazy ass candidate.

I agree with Dario on the issues probably 100%.  I was hoping he'd get the nomination.  But months ago, when Jess and Ann turned against him and decided to support Howie, it was because lazy Dario wasn't running a real campaign.  You don't control the media or what it covers.  You do control your campaign site and you do control you social media.

We started out noting Dario here every Saturday or Sunday that we noted Howie.  Then I wasn't noting Howie.  Why?  I had nothing to note from Dario's campaign.  Was that fair to Howie -- or anyone running a real campaign -- that they didn't get noted because their opponents were too lazy to even Tweet once a week?

Dario's nonsense plays with Cindy because (a) she likes him and (b) she wasn't paying attention to his campaign -- as she notes, she's not a Green.  I'm not either but we try to note all candidates for president and have done that from the beginning.  Much to David Cobb's displeasure in 2004.  I believe he was our first e-mail complaint from a non-journalist.

I wish Dario had gotten the Green Party's presidential nomination.  I think he has a great stand on the issues.  But Dario didn't get the nomination -- apparently he's this year's Hillary Clinton in that he's just not going to go away -- and that is his fault.  He needs to own that.

His criticism of the Green Party may be accurate, it may not.  But he needs to start taking ownership for the fact that he didn't run a real campaign.  If Dario was not happy that a co-chair of the party (I believe he means Dr. Margaret Flowers) was on Howie's campaign, guess what?  He had months to object to that.  He could have Tweeted and reTweeted that.

He would have had to have named her and he's too much of a chicken s**t to name her, but we would've noted it.

After he fails as a candidate, he refuses to look at his mistakes, he refuses to be honest.  He also refuses to discuss anti-war or peace in anything but platitudes which may have been the second most disappointing thing about the interview.  And, so no one e-mails me, I don't call US troops War Criminals.  I don't do that for Iraq, I don't do it for Vietnam.  Stephen D. Green was a War Criminal.  His actions were War Crimes.  But I do not use him to smear other troops.  I don't know why, in that interview, we're calling Howie Hawkins a War Criminal because he served in Vietnam but, to be clear, that's their interview, that's not me.

And people need to tell him that a Green Party convention is not "fascist."  He has no idea what fascism is when he trots out that.

And he's got no idea of anything.  He needs to close his mouth right now and work on his campaign site.  He's too late on many ballots and he's too stupid to use his campaign site.  Click here.  It's a list of state's where he has ballot access and where he's working on it and --

Oh, no, it's not.  That was published at least three months ago (see bottom of the page).  He's supposedly campaigning as an independent and working on ballot access . . . but he hasn't even updated his campaign site.  If someone believed in him and wanted to work for ballot access, if they visited his site, they would either be misled or wasting their time.

He says he's running as an independent and he says he has left the Green Party but the bottom of this page -- his official campaign site -- says "Green for President."

I'm really disappointed in this interview.  It's one thing to allow Dario to come on and trash the Green Party -- I've got no problem with that -- but considering how lazy he was -- not to mention he hid out in California for weeks not working on his campaign -- to allow him to whine that the nomination was stolen from him, that's outrageous.

Dario's sour grapes are his own, the rest of us don't need to share them and we don't need to pretend that he was denied anything except by himself.  I've never seen a more fake ass run for a nomination than Dario's and he needs to grow the hell up and grasp that Howie Tweeted repeatedly each day, that Howie's campaign site updated many times a week.  Dario didn't.

That's him hurling accusations again.  They may be true, they may be false.  But the reality is that no one harmed his campaign more than he did.

And the Green Party better start responding to these charges.  If they don't, they're going to spread and they'll be believed because that's the only information that's out there.

Joseph Kishore is the SEP's presidential candidate.  In the last 24 hours, he's Tweeted this:

Trump’s plan to send paramilitary police throughout the US: The ruling class prepares for civil war

Trump’s plan to send paramilitary police throughout the US: The ruling class prepares for civil war
The Trump administration’s plans to deploy federal paramilitary forces in major American cities is a major escalation of the assault on democratic rights and the

Bezos makes $13bln in one day. Meanwhile the #coronavirus rages out of control. 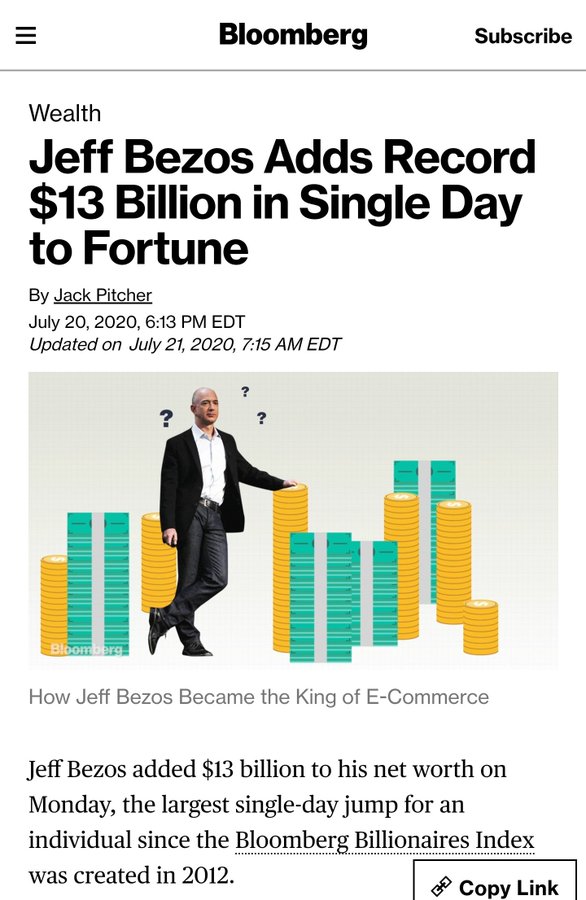 Trump's creeping coup: White House sending federal police into major American cities. On Portland: "They grab a lot of people and jail the leaders... These people are anarchists, people that hate our country and we’re not going to let that go forward."

When Dario was seeking the Green Party's presidential nomination, those three Tweets would have been all he offered for a whole month.  Joseph Kishore's done them in one 24 hour period.  It's about being a real candidate.  Every day, you need to be offering something so that people have a reason to discuss your campaign.

As ALJAZEERA notes above, Iraq's prime minister, Mustafa al-Kadhimi, arrived in Tehran yesterday and met with the country's president Hassan Rouhani.  The leaders share a border and many other things.  Mustafa repeated that he would not allow Iraqi soil to be used for war on Iran.  He's made that comment before.

Iraq's airports aren't yet open for international travel but Mustafa visited Iran and his oil minister visited Saudi Arabia.  In a country already plagued with corruption and where the leaders are not trusted, how wise is it for them to be traveling when the Iraqi people cannot?

The pandemic continues around the world and in Iraq.  MIDDLE EAST EYE reports:

Iraqi health workers are warning that patients in need of critical medical care are at risk of death as a result of increased restrictions at checkpoints at the border between Iraq's autonomous Kurdish region and the rest of the country.
Following the outbreak of the coronavirus pandemic in early 2020, travel between much of Iraq was heavily restricted, particularly between the areas in northern Iraq controlled by the Kurdistan Regional Government (KRG).
This has left Iraqi patients in need of life-saving treatment unable to travel to better-equipped and resourced hospitals in the KRG.