When a gold digger loves fame 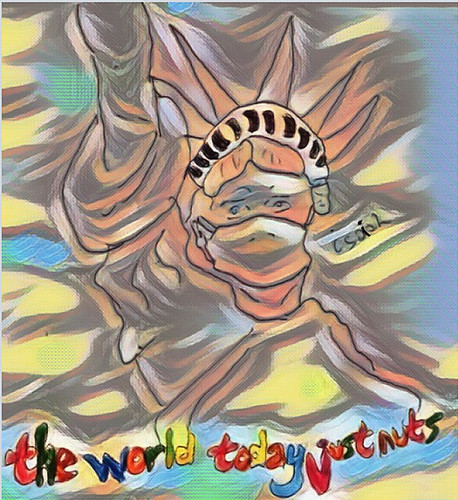 We need some liberty.  And some truth.  Johnny Depp and his former wife -- gold digger Amber Heard -- were in court today.  NY POST notes:

“You got hit … but I did not punch you,” Heard, 34, told him on the tape, according to report. “I did not f–king deck you. I f–king was hitting you,” the Mail said.
Depp’s legal team is using the tapes to show that the Hollywood star’s ex was behind the violence in their marriage as he sues The Sun newspaper for libel for an article that branded him a “wife beater.”
“He is not and never has been a wife beater,” Sherborne told the High Court hearing, according to the Evening Standard.
The tapes help prove that Heard was the violent one, the barrister said, according to the Standard.
“Ms. Heard has invented these stories of serious violence,” Sherborne said.

Depp painted himself as the peacemaker who tried to de-escalate things. “Whenever it would escalate, I would try to go to my own corner, as it were … before things got out of hand,” he said.

She's a liar.  She's also a lesbian who used him to advance her own career.  She married a man to become famous.  Why are we surprised that she'd later, when the marriage was clearly over, start lying again.

When did the marriage end?  THE DAILY MAIL notes, "But the most sensational revelation from Depp was that he decided to divorce Heard after faeces was left in their bed."

That sounds about right.

She really is disgusting.  I think if you looked up "trailer trash" in the dictionary, you'd find a picture of her.

That doesn't make Johnny a genius, by the way.  He was a fool to get involved with her.  Unless he's into three-ways, he should have known that marriage to a lesbian was not going to work.

Tuesday, July 7, 2020.  Looking at the global pandemic and how Iraq is suffering from it.

From her album CHALK MARKS IN A RAIN STORM, that's Joni Mitchell performing "A Bird That Whistles (Corrina, Corrina)."

Starting in the US and with me.  A blogger e-mailed noting that he was discussing the need for masks at his site and was encouraging others to do so as well.  He doesn't want a link so I won't link to him or name him -- if he changes his mind, I will note him.

It's not my job to tell you what to do.  Presumably most of you are grown ups.

I'm in several at risk groups -- including medical (I'm diabetic and I'm back on chemo).

Do I think a mask is a save all?

I assume the mask helps others you're around.  I also take the attitude with the masks that we had regarding condoms during the AIDS crisis.  They weren't 100% effective (they can break) but you were safer using them when you had sex.

What about our rights?

Other infringements, I probably would object to.

What should you do?

That's up to you.  The numbers are increasing, in the US and in the world.

That's Najaf in Iraq.  It's all around the world, not just the US.  If you have ideas for how to reduce the spread of coronavirus, share them.  Share them online.  If you want, you can even send them here and I'll post regardless of where you stand on the issue -- for the rest of this week only.  It could spark a conversation that we need to have.

The hope was always that the summer, the warm weather, would send the virus packing for a few months or at least the warm weather would see a significant reduction in new cases.  That has not happened.

We would all love to see a vaccine but I'm doubtful we'll have that by the fall.

We need to have a national conversation on this issue.

The president hasn't helped.  Congress has outright failed us (refusing to push for $1,200 a month for every American adult was failure -- and it's cute how Bernie wanted to lead the charge vocally but didn't do a thing to make it come true in the Senate).

People who feel the mask is a violation of their rights should especially be discussing what's going on right now.

This is about public health and public safety.  It's a dialogue that, in this country, every one needs to take part in.  That's what democracy is about.

If you need something noted on cornavirus this week -- e-mail common_ills@yahoo.com and we'll note it.

According to WORLD OMETERS INFO, Iraq has had 62,275 cases of coronavirus with 2,567 deaths.  The CIA estimates Iraq's population (no census has been done in decades) to be 38 million.

U.N. Secretary-General Antonio Guterres warned Monday that the COVID-19 pandemic provides new opportunities for the Islamic State extremist group, al-Qaida and their affiliates as well as neo-Nazis, white supremacists and hate groups.
The U.N. chief said it's too early to fully assess the implications of the coronavirus pandemic on terrorism, but all these groups seek to exploit divisions, local conflicts, failures in governing, and other grievances to advance their aims.
Guterres told the launch of United Nations Counter-Terrorism Week that the Islamic State group, which once controlled a vast swath of Syria and Iraq, is trying to reassert itself in both countries, ``while thousands of foreign terrorist fighters battle in the region.''
In other news, AL-MONITOR notes:

Notable Iraqi security analyst Hisham al-Hashimi was assassinated in Baghdad today, according to multiple reports.
On Monday, Agence France Presse reported that Hashimi was walking out of his Baghdad home when three gunmen on two motorcycles shot and killed him at close range.
Hashimi was a known and respected commentator on Iraqi affairs who was particularly knowledgable on the Islamic State. Just about an hour before his death, he tweeted that division in Iraq was the result of the ethnic and religious quota system put in place following the 2003 US invasion. The tweet, which some shared after his death, has now been liked more than 11,500 times.

These pictures today from the funeral of Hisham Al-hashimi in the city of Najaf in central Iraq - there was no official funeral by the Iraqi state, nor a military presence , these are bad signs of the performance of the new Iraqi government.

I strongly condemn the assassination of Iraqi security expert Hisham Al-Hashimi last night in Baghdad. My heartfelt condolences to his family and loved ones. Authorities must find the perpetrators of this terror act and bring them to justice.
3:30 AM · Jul 7, 2020

Condemn of killing 1 man, but not condemn the killing of servals Kurdish people by Turkish Airstrike. Bravo bravo you corrupt politican! You people deserve to be overthrown and being punished by the law!