Apparently, Jann Wenner is one of those elderly gays of another era who hates women.

Well, at least he finally came out . . . as a man in love with another man -- if not exactly as gay.

It's such a hard word for the elderly Jann to say: Gay.

And so women suffer.

Janet was not in Michael's shadow.

But even after the rest of the Jacksons left Motown and Jermaine stayed and tried to have a solo career, he was forever in Michael's shadow.

And that's because she could throw down.

"All Right With You."

"What Have You Done For Me Lately?"

The woman ruled the charts.

So her induction into the Hall should be easy as pie.

But she was nominated last year and didn't get in.

Will she get in?

Beastie Boys got in on their first time.

But they got in.

A true artist didn't get in first go round.

We'll have to wait and see if she gets in this year.

Tuesday, October 18, 2016.  Chaos and violence continue, no real solutions have been implemented, Amnesty International notes the continued persecution of the Sunnis, and much more.

Strikes in Iraq
Attack, bomber, fighter and remotely piloted aircraft and rocket artillery conducted seven strikes in Iraq, coordinated with and in support of Iraq’s government:

-- Near Qaim, a strike engaged an ISIL tactical unit and destroyed a vehicle.

-- Near Qayyarah, two strikes engaged two ISIL tactical units and a mortar position; destroyed an ISIL-held building, a mortar system, an oil tanker truck and a rocket-propelled grenade. A vehicle was damaged.


And along with the four strikes above near Mosul, forces are targeting the city where the Islamic State took control in June 2014.

Spencer AckermanVerified account ‏@attackerman  6h6 hours ago
“The Iraqi army arrived yesterday and took the town, and today Isis came back and the army ran away.”
1 reply24 retweets15 likes


While  much of the US press offers rah-rah, XINHUA serves up some actual news. 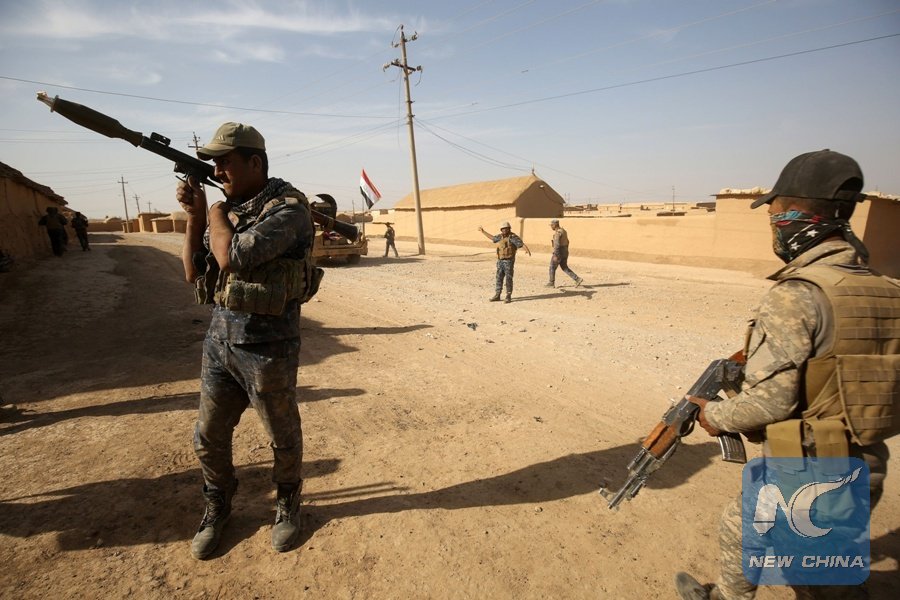 Not, US President Barack Obama insisted, boots on the ground.

But that's exactly what they are.


The start of Iraqi operations to liberate Mosul is another major step forward. Mosul, as many of you know, is Iraq's second largest city and ISIL has been entrenched there for more than two years -- perhaps 1 million civilians are still living there. And so, in addition to rooting out ISIL, our focus jointly is on the safety and the humanitarian aid for civilians who are escaping the fight. That's going to be a top priority for both our governments.  Mosul will be a difficult fight and there will be advances and there will be setbacks. But I am confident that --  just as ISIL has been defeated in communities across Iraq -- ISIL will be defeated in Mosul as well and that will be another step towards their ultimate destruction.


But, of course, ISIS does not get defeated on the battlefield.

Once upon a time, Barack grasped that.

Above all, Iraqi leaders must rise above their differences and come together around a political plan for Iraq’s future.  Shia, Sunni, Kurds -- all Iraqis -- must have confidence that they can advance their interests and aspirations through the political process rather than through violence.  National unity meetings have to go forward to build consensus across Iraq’s different communities.  Now that the results of Iraq’s recent election has been certified, a new parliament should convene as soon as possible.  The formation of a new government will be an opportunity to begin a genuine dialogue and forge a government that represents the legitimate interests of all Iraqis.
Now, it’s not the place for the United States to choose Iraq’s leaders.  It is clear, though, that only leaders that can govern with an inclusive agenda are going to be able to truly bring the Iraqi people together and help them through this crisis.  Meanwhile, the United States will not pursue military options that support one sect inside of Iraq at the expense of another.  There’s no military solution inside of Iraq, certainly not one that is led by the United States.  But there is an urgent need for an inclusive political process, a more capable Iraqi security force, and counterterrorism efforts that deny groups like ISIL a safe haven.

"There's no military solution inside Iraq," he said.

But all he's done is take a military approach -- dropping bombs daily, sending US troops in, etc.

Where's the effort on the part of diplomacy?

Where's the work of the State Dept?

Oh, that's right -- John Kerry has a big case of cabinet envy and tries to play Secretary of Defense while ignoring his own State Dept.

And nothing is done to attempt to move Iraq towards a political reconciliation.


David Gardner (FINANCIAL TIMES OF LONDON) observes, "Mr Abadi looks no match for such powerful forces, including militia notionally aligned with his Shia Islamist Da’wa party but ultimately beholden to Iran. His efforts to restore power-sharing between Shia, Sunni and Kurd have so far failed. A sectarian political class, putting faction before state, has hollowed out Iraq into de facto partition. Absent a consensus on how to share Iraq, the question of who governs a liberated Mosul will be an explosive one."

Nothing has changed in two years.

As Ranj Alaaldin (GUARDIAN) observes, "In other words, the conditions that gave rise to Isis in the first place are still there and have been exacerbated, rather than alleviated, over the past two years since the jihadis took control of Mosul in 2014."


Paramilitary militias and government forces in Iraq have committed serious human rights violations, including war crimes, by torturing, arbitrarily detaining, forcibly disappearing and extrajudicially executing thousands of civilians who have escaped areas controlled by the armed group calling itself the Islamic State (IS), said Amnesty International in a new report published today.
The report ‘Punished for Daesh’s crimes’: Displaced Iraqis abused by militias and government forces exposes the terrifying backlash against civilians fleeing IS-held territory, raising alarm about the risk of mass violations as the military operation to recapture the IS-held city of Mosul gets underway.
The report is based on interviews with more than 470 former detainees, witnesses and relatives of those killed, disappeared or detained, as well as officials, activists, humanitarian workers and others.
“After escaping the horrors of war and tyranny of IS, Sunni Arabs in Iraq are facing brutal revenge attacks at the hands of militias and government forces, and are being punished for crimes committed by the group,” said Philip Luther, Research and Advocacy Director for the Middle East and North Africa at Amnesty International.
“Iraq is currently facing very real and deadly security threats from IS, but there can be no justification for extrajudicial executions, enforced disappearances, torture or arbitrary detention.

“As the battle to retake Mosul gets underway, it is crucial that the Iraqi authorities take steps to ensure these appalling abuses do not happen again. States supporting military efforts to combat IS in Iraq must demonstrate they will not continue to turn a blind eye to violations.”

SIEGEL: And your report details a number of specific incidents of what you allege are war crimes. What would you say are the most important findings?

ELTAHAWY: Amnesty International's findings really show a consistent pattern of abuse committed by predominantly Shia militias but also by members of the government forces. I can give you one example from the recent operations to retake Fallujah and surrounding areas.

SIEGEL: Fallujah, a city that had been taken by ISIS and then was retaken by the Iraqi government...


ELTAHAWY: Yes, yes. The prime minister, just like now in the operations for Mosul, has called for the protection of civilians. What happened in reality was very different. We spoke to a number of survivors from an area just north of Fallujah who told us that they were intercepted by a large force of men in different uniforms. And then the men were separated from the women and marched off to be shot dead. And this is 14 men and four boys. And this is just one incident.


In other news, the Turkish government continues to insist that its troops will remain in Iraq -- this despite objection from the Iraqi government.


RT reports that Baghdad witnessed a large protest today outside the Turkish Embassy.

Iraqi Day  🇮🇶 ‏@iraqi_day  14h14 hours ago
#BREAKING Sadr : All PMF leaders agreed on #Turkey as an invaders and we will take necessary steps against it. #هاي_موصلنا_عراقيه
1 reply31 retweets10 likes

Newly released documents show that the State Department sought to shield Clinton from prosecution by pressuring the FBI to drop its insistence that an email on the private server she used while secretary of state contained classified information.
The FBI ultimately decided against declassifying the email's contents, despite pressure from Patrick Kennedy, the State Department’s most senior manager, according to the latest release of interview summaries from the FBI’s year-long investigation into Clinton's exchange of classified government secrets via her unauthorized server.


So it's no surprise that the US government appears to have pressured the government of Ecuador into cutting Julian Assange's internet connection.

The State Dept is denying any US involvement.  Does anyone believe them?

😀Bring Back Bernie ‏@HillaryLostMe  2h2 hours ago
RT DrJillStein: If JohnKerry did ask Ecuador to cut off Assange's Internet access, what else is the U.S. hiding? #…
5 replies39 retweets33 likes

In reply to WikiLeaks

Tweeting Yarnie ‏@TweetingYarnie  13h13 hours ago
@wikileaks figures. John Kerry is interfering with truth. The elites are frightenedtruth will ruin Hillary and their chances for riches
7 replies126 retweets351 likes


And while Julian certainly has reviewed the documents, he's not the one hitting publish.

This is more than a little stupid on the part of Hillary's government groupies.

Donald Trump is the presidential candidate for the Republican Party.  He Tweeted:


And Adam H. Johnson reminds how 'comedians' posing as news sources time and again come out against free speech.

Adam H. Johnson ‏@adamjohnsonNYC  Oct 17
No one has marginalized third parties before. Glad Oliver has the courage to say what so many refuse to. 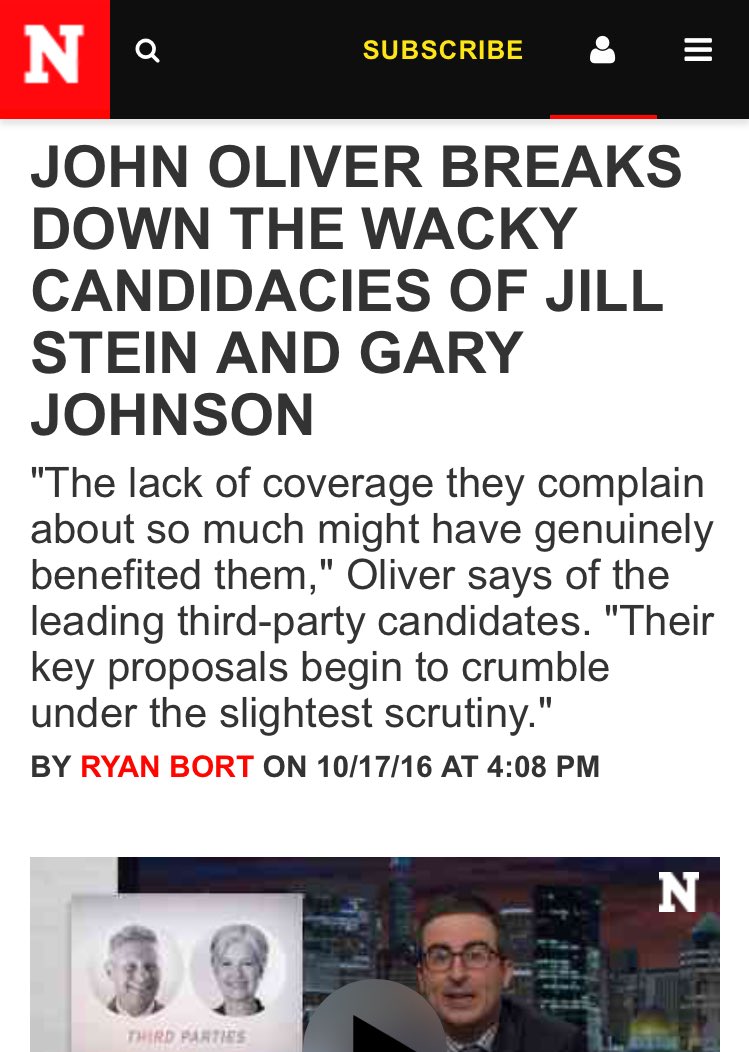 Jill Stein is the presidential candidate on the Green Party ticket.  She's clearly offended British John Oliver.  Oliver, not being a US citizen, probably won't be voting in the US elections.  In his own country, they have many political parties so it's rather shocking that he's threatened by the same in the US.

Jeff Mackler is the presidential candidate as well and you can tune into this week's episode of LAW AND DISORDER RADIO to hear more about him.