Benaffleck's at his best when he genuflects.

That's the key to THE ACCOUNTANT.

It's a performance on bended knee, not show boaty.

It's probably the best role Ben Affleck's ever had and he runs with it in a way that really drives home he's got more talent than we've seen in the last two decades.

It's also a tight thriller that surprises with twists and turns.

It has more promise than Matt Damon's original turn as Jason Bourne and it could probably result in many finer sequels than the Damon films have.

Anna Kendrick has proven herself in comedies (MIKE & DAVE NEED DATES) and in musicals (the PITCH PERFECT franchise) but she's also got talent for thrillers and, hopefully, next go round she'll be the lead in one.

John Lithgow and Jean Smart also shine in the film -- but the whole cast is solid.

Friday, October 14, 2016.  Chaos and violence continue, Haider al-Abadi is said to survive an assassination attempt, the refugees and displacements that Mosul liberation or 'liberation' will create is a given and should be addressed now, and much more.

US President Barack Obama is hoping to both bolster his legacy and deliver the election to War Hawk Hillary Clinton via a 'victory' in Mosul.

Mosul was seized by the Islamic State in June of 2014.  Over two years later, it's suddenly time, a month before the US presidential election, to liberate or 'liberate' it.

And you get US government spokespersons trying to gin up US public interest with press releases like "Liberating Mosul Will Be Iraq's Biggest Fight, OIR Spokesman Says."


So -- get this -- the US government is preparing.

Preparing for everything, apparently, except helping Iraqis.

UNICEF Iraq يونيسف ‏@UNICEFiraq  Oct 8
Shahad, 3, in a tent in a camp south of #Mosul, is one of 4.7 million children in #Iraq who currently requires humanitarian assistance.

Iraq's already got a displacement crisis.

UNICEF Iraq يونيسف ‏@UNICEFiraq  Oct 8
Shahad, 3, in a tent in a camp south of #Mosul, is one of 4.7 million children in #Iraq who currently requires humanitarian assistance.


Liberating or 'liberating' Mosul will result in more displacement.


This is a known.  Where is the preparation by Barack to deal with that?

Oxfam InternationalVerified account ‏@Oxfam  8h8 hours ago
We call for genuinely safe routes for civilians to escape #Mosul fighting & get to the shelter/help they need: oxf.am/Z6y8 #Iraq

Save the Children UKVerified account ‏@savechildrenuk  Oct 8
An assault on Mosul risks 600,000 children's lives. Children will be in the line of fire - unless we act now save.tc/b6Ux304XRX5 #Iraq


Many are warning what's coming.  There's no excuse for Barack's failure to prepare for this.  The White House better get on it and if they fail in this task the news outlets might want to try to remember there's supposed to be a difference between journalism and hagiography.

And Ken Roth better ask himself if pimping for Hillary Clinton is worth short changing human lives? I'm talking about the failure of Human Rights Watch to warn of this impending disaster while Roth sends his 'coded' Tweets of support to Hillary (which include pimping the lie that WikiLeak's revelations are due to Russian hackers).  Roth would do better to focus on humanity and stop cheapening his reputation with election politics.


The timing of Mosul faces complications due to the ongoing animosity between the governments of Iraq and Turkey.  Turkey has troops in Iraq.  The government of Iraq wants them out.  Turkey is refusing to remove the troops.

Birce Bora (ALJAZEERA) observes, "Only weeks before Iraqi troops and their local and international partners start their push to retake the city of Mosul from the Islamic State of Iraq and the Levant (ISIL, also known as ISIS), the leaders of Turkey and Iraq have been caught in a war of words that could derail the Mosul liberation efforts."


In other news out of Iraq today, there's this:

THE BAGHDAD POST apparently has the exclusive, if the attempt took place.

What is known and established by others right now is that Haider al-Abadi was in Kirkuk earlier today. 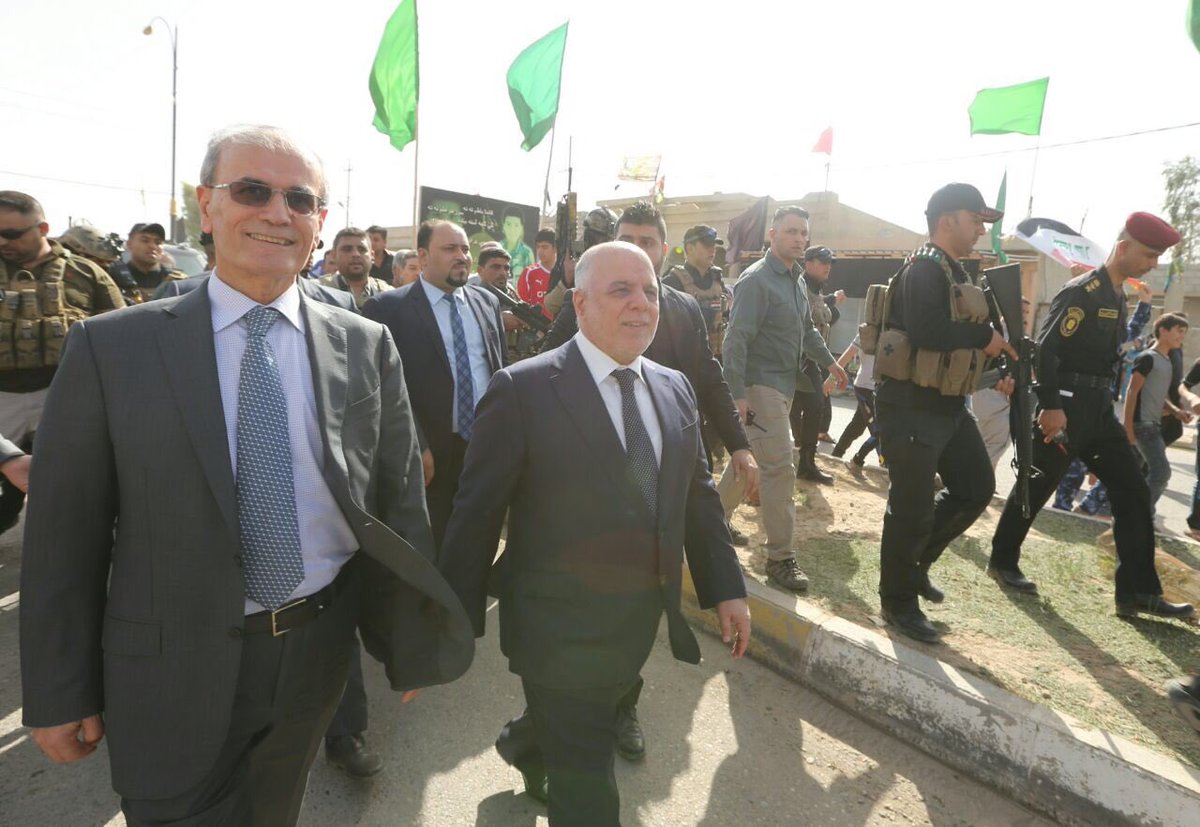 Mohammed Jabaal (BAGHDAD POST) reports that there was a shelling on a post where al-Abadi had been ten minutes prior.  No one was injured in the shelling.

Haider was put in check on Tuesday by Iraq's federal courts who overturned his decision (unconstitutional decision) to do away with the post of vice president.  This means that Osama al-Nujaifi, Ayad Allawi and Nouri al-Maliki remain vice presidents.

Nouri is the former prime minister and thug of Iraq whose actions -- persecuting the Sunni people, among his many actions -- nearly destroyed Iraq.

So it's no surprise that this is one response to the news:


Moqtada and Nouri have long been foes and rivals for control of the Shia population.

And the US Defense Dept announced Thursday:

I know a few people are posting this morning.

I'll add the following community sites posted when they go up: