So what did you think about QUATUM LEAP II?

Who knew it was getting a reboot?

I liked the ads.

If only the hour long episode had been as entertaining as those 30 minute spots.

I found the whole thing boring and slow.

And the ratings were bad, really bad.

Maybe episode two will be better?

I like sci fy so I'll give it another try next week but I don't think I'll be watching beyond episode three if things don't pick up quick.

Tuesday, October 4, 2016.  Chaos and violence continue, Turkey's proposal to keep troops in Iraq for another year meets with huge resistance, Shi'ite militias stockpile weapons in Iraq, and much more.

ALSUMARIA reports that Parliament is calling for the expulsion of the Turkish Ambassador and for Iraq to cut all economic ties with Turkey.  This is in response to Turkey's Parliament voting earlier this month to extend the Turkish military's mission in Iraq by one year.

This move follows Monday's statement from Iraq's Ministry of Foreign Affairs which rebuked Turkish President Recep Tayyip Erdogan and his statements that Turkey would take part in the liberation of Mosul.

Turkey has a history of suppressing Kurds which has led to various groups of rebels/freedom fighters arising over the years.  The PKK is the most famous or infamous.  It's a group of Kurds that have been waging war on the Turksih government since the 80s in a fight for Kurdish rights.


Aaron Hess (International Socialist Review) described the PKK in 2008, "The PKK emerged in 1984 as a major force in response to Turkey's oppression of its Kurdish population. Since the late 1970s, Turkey has waged a relentless war of attrition that has killed tens of thousands of Kurds and driven millions from their homes. The Kurds are the world's largest stateless population -- whose main population concentration straddles Turkey, Iraq, Iran, and Syria -- and have been the victims of imperialist wars and manipulation since the colonial period. While Turkey has granted limited rights to the Kurds in recent years in order to accommodate the European Union, which it seeks to join, even these are now at risk."

Kurds are throughout the Middle East.

In Turkey, they live under a system of apartheid.

In Iraq, they tend to live in the semi-autonomous Kurdish Regional Government in northern Iraq.

The Turkish government has long feared that the KRG might move from semi-autonomous to autonomous -- the fear being that an independent land for Kurds would inspire Kurds outside of Iraq and fuel independence movements.

Despite this fear, the post-2003 invasion Iraq period has seen the Turkish government being much closer to the KRG than to the central Iraqi government based in Baghdad.

Under Nouri al-Maliki's terms as prime minister (2006 -2014), for example, Turkey was accused of helping to steal Iraqi oil and backing terrorists.

Nouri did approve, however, of Turkey bombing northern Iraq.

Turkey has declared that its war planes bomb PKK terrorists.

The reality is that many farms in northern Iraq have been destroyed and many civilians have been left dead and injured.

In the fall of 2014, Haider al-Abadi became prime minister.

He has objected to the bombings carried out by Turkish airplanes as have various other Iraqi officials; however, the US State Dept has pronounced these bombings necessary and that apparently means the end of the story.

The announcement that Turkey would extend its Iraq mission for another year has kicked off the latest round of disagreements.

Iraq has made clear that it does not want Turkish troops on the ground in Iraq.

The message has not been received by the Turkish government.

Which is why the Iraqi government and various officials are now pushing back against talk of Turkish troops remaining in Iraq for another year and Erdogan's talk of what a post-liberated Mosul should be made up of.


Iraq's biggest political bloc, the Shi'ite group the National Alliance, has called for Turkey to withdraw all of its troops from Iraq.

In addition, the Iraqi militias -- known as the PMU -- are weighing in. 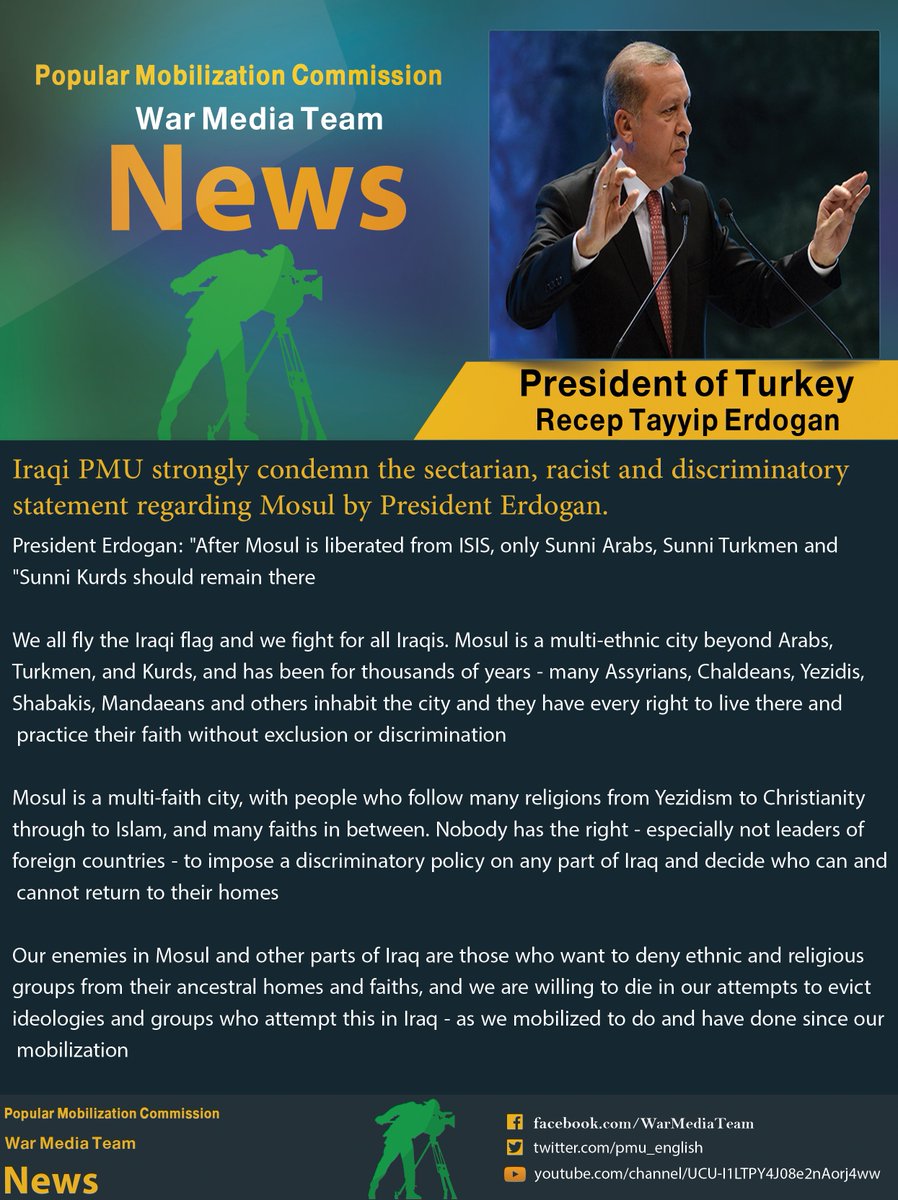 On the subject of the Shi'ite militias, Mustafa Suudan (AL MONITOR) reports:

Factions of Iraq's Popular Mobilization Units (PMU) are threatening to attack US troops that participate in the battle to liberate Mosul from the Islamic State (IS), but the Iraqi government hopes to smooth things over.

Iraqi Prime Minister Haider al-Abadi said his government will work on a consensus formula to convince PMU factions of the need to involve US troops in the battle to resolve the problem as soon as possible. He also hopes to persuade Washington that the PMU is a national force of the Iraqi state and should be part of a special military system to liberate Mosul.


Meanwhile, the militias are stockpiling bombs and weapons and this has, most recently, led to a serious fire.  Ibrahim Salah (NIQASH) reports:

It turned out that the weapons depot was one managed by a Shiite Muslim volunteer militia, one of those belonging to Hezbollah in Iraq. The militia have these weapons in order to be able to fight the extremist group known as the Islamic State, which has caused the security crisis in Iraq. The weapons were stored in an abandoned factory.
After the fire, Baghdad’s provincial council and the federal government put out statements saying that militias should not be storing weapons in highly populated areas in the central city. The militias themselves expressed regret, saying that they would try and prevent their fighters from storing weapons inside cities and that they would try and follow the orders on the subject issued by the Ministries of the Defence and the Interior as well as Prime Minister Haider al-Abadi’s office.
The militias involved began to move weapons out of some of the better known storage facilities and they also began closing some of their more random offices and unlicensed premises. But the ordinary citizens of Baghdad remain concerned. Some of the militias refuse to divulge where they are storing weapons and civilians suspect the depots are to be found in apartment buildings and other non-military facilities.
The Iraqi security services have said that they know of around 20 weapons depots in the capital. Some are in the Sadda neighbourhood in Sadr City toward the east, in Hurriyah and Shula toward the north and Maalef in the south. There are also other secret locations they know nothing about. The militias store the weapons everywhere from uninhabited houses and abandoned storage facilities to unused mosques and schools.

Yesterday, the US Defense Dept announced:


Strikes in Iraq
Attack, fighter and remotely piloted aircraft, as well as rocket artillery, conducted 14 strikes in Iraq, coordinated with and in support of Iraq’s government:

-- Near Beiji, a strike destroyed an ISIL weapons cache and damaged a vehicle.

-- Near Hit, a strike destroyed an ISIL heavy machine gun.

-- Near Ramadi, two strikes engaged an ISIL tactical unit and a staging area, and destroyed four vehicles, a fuel truck, three ISIL-held buildings, a weapons cache, a supply cache and a mortar system.

-- Near Rawah, a strike destroyed an ISIL vehicle storage area.

And in other news, ALSUMARIA reports that Salman Jumaili, the Minister of Trade, is being accused of poisoning the people of Iraq by purchasing rotten rice by a member of Parliament's Integrity Commission who also states that this member of the Cabinet could not have acted without the knowledge of Prime Minister Haider al-Abadi and states Abadi must take questions from the Parliament.


Over the weekend, UNAMI issued the following:


Baghdad, Iraq, 01 October 2016 – A total of 1,003 Iraqis were killed and another 1,159 were injured in acts of terrorism, violence and armed conflict in Iraq, including Anbar, in September 2016*, according to casualty figures recorded by the United Nations Assistance Mission for Iraq (UNAMI).

A total of 394 members of the Iraqi Security Forces (including Peshmerga, SWAT and militias fighting alongside the Iraqi Army but excluding Anbar Operations) were killed and 208 were injured (not including casualties from Anbar).

According to information obtained by UNAMI from the Health Directorate in Anbar, the Governorate suffered a total of 254 Civilian casualties (219 killed and 35 injured). Figures are updated until 28 September, inclusive.

“It is a very sad state of affairs that the numbers of Iraqis killed and injured remains very high and unacceptable. Civilians continue to bear the brunt of the violence,” Special Representative of the United Nations Secretary-General for Iraq (SRSG), Mr. Ján Kubiš said.

“The Holy month of Muharram has started and I sincerely hope that the killings will stop during this month,” SRSG Kubiš added.

*CAVEATS: In general, UNAMI has been hindered in effectively verifying casualties in conflict areas. Figures for casualties from Anbar Governorate are provided by the Health Directorate and are noted below. Casualty figures obtained from the Anbar Health Directorate might not fully reflect the real number of casualties in those areas due to the volatility of the situation on the ground and the disruption of services. In some cases, UNAMI could only partially verify certain incidents. UNAMI has also received, without being able to verify, reports of large numbers of casualties along with unknown numbers of persons who have died from secondary effects of violence after having fled their homes due to exposure to the elements, lack of water, food, medicines and health care. For these reasons, the figures reported have to be considered as the absolute minimum.