Paul e-mailed noting that Ava and C.I. frequently note free streaming platforms to get the word out and he wondered if I'd note THE ROKU CHANNEL.

Surely.  I watch it.  It has free movies and free TV shows.

What do I watch?


Here's what I did watch: THE CAROL BURNETT SHOW.  I've watched every episode they have -- probably watched every episode four times.  Wish they had more.  They recently took that off.  All other programs and films I mention are up now -- and they're not under "Last chance to catch" and about to go away this month.

Other TV shows?  I sample FACTS OF LIFE, CYBIL and 227. And, as a Goldie Hawn fan, I'd heard of GOOD MORNING WORLD for years but never seen the show.  This is a sitcom that Goldie did right before she went to LAUGH-IN.  She's only on the first half of the episodes, but she's great in those episodes.  The writers of the show do not know how to write women characters so the wife is worthless once Goldie's gone.  While Goldie's on, the wife at least had a purpose in the scenes with Goldie (Goldie played the wife's best friend).

There's a lot to watch.

Again, it's THE ROKU CHANNEL and it's free.

Thursday, March 12, 2020.  The press continues the coronation of Joe Biden.


Starting in the US with the race for the Democratic Party's presidential nomination.  And, first, an apology.  I guess it's the cold I've been trying to shake since January in New Hampshire but somehow I missed all the primaries that took place yesterday, the ones Joe Biden won.

There were no primaries yesterday?

Oh.  Hmm.  So all the new talk in the last 24 hours about how Joe has the nomination and all of that is just . . . talk.  Imagine that, the media calling the race over before the people get to vote.

No, they're not biased at all.

Well, maybe they're excited because of history?

I mean, every vice president must go on to be president in the Democratic Party, right?

That's been the only path on the Democratic Party side.

Well Joe's a winner, though, right?  He's got the youth all jazzed and excited and -- Oh, he doesn't have that either does he.  You know Bill Clinton's campaign theme was "Don't Stop Thinking About Tomorrow" (Christine McVie's song for Fleetwood Mac), I guess Joe's will be the Beatles' "Yesterday."

That's not going to help us address today, let alone tomorrow.  Nor is it a winning campaign slogan.

But don't worry, come November, if Joe fails to win the White House, it won't be his fault.  No, the press and the DNC will blame the American people.  The loss won't be due to an out of touch candidate who couldn't offer the people any of the basic needs, it'll be those dumb voters who just couldn't see that a corporatist who told idiotic stories -- most of them lies -- about his own past to ignore the present was the answer to the future.

Joe can't even stand for the next debate (his campaign demands that he and Bernie be seated) but, hey, he's up for four years as the leader of the country.

I have no sympathy for Joe Biden as he's written off my entire generation and our concerns like the 08 crisis never happened.

Seething disdain is what I have for mumbling lying joe insulting an entire demographic and then telling them he has no sympathy for them. #BidenIsAGiftToTrump

Could Joe Biden count to ten without getting lost?

You think Biden will beat Trump? Have you seen the video of all the uncomfortable little girls? Look these people are going to destroy Joe Biden. He doesn't have the integrity to stand up to that kind of assault. He is all the things they said about Hillary and more.


Having remained largely hidden from view after his comeback on Super Tuesday, the former vice president made headlines thanks to a needlessly testy exchange at a Detroit auto plant and complained that “The Bernie Bros are here!” when interrupted by green and anti-NAFTA protestors at a campaign event elsewhere in the city.
Biden’s most significant public appearance since last week, however, took the form of a sit-down with MSNBC’s Lawrence O’Donnell — his first and only substantive interview in more than a week. Touching, among other things, on health care, the Iraq War, and the Trump administration’s response to the coronavirus pandemic, Biden’s strange and rambling appearance can only be called an alarming harbinger of what lies ahead, should he ultimately become the Democratic nominee.
In a span of less than twenty minutes, while facing a decidedly friendly and nonconfrontational interviewer, Biden offered some clue as to why he’s maintained such a low profile this past week despite having recovered his status as the race’s front-runner.

Later in the interview, Biden was asked by O’Donnell about his support for the Iraq invasion. If his remarks about health care could charitably be called incoherent, here they were nothing short of Orwellian.

Look, the reason I voted the way I did was to try to prevent a war from happening. Remember, the threat was to go to war. The argument was because Saddam Hussein had weapons of mass destruction. So [Bush] said, “I need to be able to get the Security Council to agree to send in inspectors to put pressure on Saddam, to find out whether or not he’s producing nuclear weapons . . .” I didn’t believe he had those nuclear weapons. I didn’t believe he had those weapons of mass destruction. What happened was we went in, determined that they hyped what, in fact, was occurring. There was no concrete proof of what he was doing, and they still went to war.

Biden’s spin on the events of 2003 echoes language he used in January at a Democratic debate in Des Moines and elsewhere on the campaign trail. In reality, Biden was one of the Iraq War’s most crucial boosters and advocates — as evidenced by a giant paper trail of video clips and Senate transcripts. As Jacobin’s Branko Marcetic wrote last summer: “A review of the historical record shows Biden didn’t just vote for the war — he was a leading Democratic voice in its favor and played an important role in persuading the public of its necessity and, more broadly, laying the groundwork for Bush’s invasion.”

Biden’s pattern of gaffes and dishonesty, though certainly remarked upon, have not as of yet proven much of a liability to his campaign. Despite spending parts of February telling an entirely fabricated story about being arrested in apartheid South Africa, the former vice president won the South Carolina primary handily and rode the momentum into a strong showing on Super Tuesday a few days later.

Two Americans and a British national were killed in a rocket attack on a military base in Taji, Iraq, that one US official said is likely the work of Iran, raising the prospect that military tensions could flare up in the region once again.
US Central Command spokesman Capt. William Urban confirmed that two US service members and one coalition service member were killed in the Katyusha rocket attack. 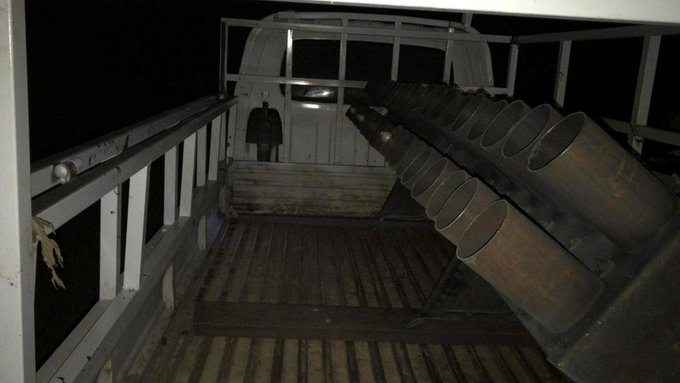 Four US troops have been killed in Iraq this week and, despite this being a presidential election year, this isn't a topic the US press wants to discuss?  This isn't something that they want to question Joe Biden or Bernie Sanders about?

While everyone is quite rightly focused on the #coronavirus pandemic, it appears an event (rocket attack near U.S. military; possibly by an Iran-backed group) that nearly led to a war between the U.S. and Iran kind of happened again. Only no one noticed

I strongly condemn the attack on coalition partners in Taji Base and express condolences to the victims’ families. This attack, at a time when ISIS remains a serious threat in Iraq and the region, will only strengthen extremist groups. Full statement.

Britain demands Iraqi authorities take action to hold to account those responsible for a rocket attack in #Iraq which killed one British and two American personnel.

Britain on Thursday demanded Iraqi authorities take action to hold to account those responsible for
english.alarabiya.net

Human rights defenders, journalists and lawyers have been kidnapped and killed in Iraq since the beginning of the month, reports the Gulf Centre for Human Rights (GCHR), which calls on the government to end the lawlessness. Most of them have been targeted by armed groups, but at least one activist was detained by government security forces.
On the evening of 10 March 2020, an unidentified armed group assassinated human rights defender Abdulqudus Qasim (picture 1), a theatre/television producer and actor, and his colleague, Karar Adel (picture 2), a human rights lawyer who worked at the Maysan Federal Appeal Court. The gunmen stopped the car in which they were traveling in the middle of Al-Amara city and instructed them to get out, then shot and killed them immediately.
Qasim, dedicated his Facebook page to show his unlimited support for the popular movement and he had told his colleagues that he expected to be killed by the outlaw militias. In a recent interview with him he said, “I am 37 years old, from the city of Al-Amara. I entered the world of theater after the Iraqi regime change in 2003. I am striving for change and fighting unawareness and superstition, and this is what I have worked on in many theatrical works."  Likewise, Adel dedicated his Facebook page to support popular protests. They have been advocates of non-violence, and have participated in protests since they began.
Their fellow protesters participated in their funerals, expressing their sorrow and determination to continue their protests until they achieve their goals. Former dictator Saddam Hussain had already executed Qasim’s father, and one of his colleagues described him as "the martyr and the son of the martyr."
On 09 March 2020, an unknown armed group kidnapped journalist Tawfiq Al-Tamimi (picture 3), who reports on the governorates for the official “Al-Sabah” newspaper, which is issued by the Public Authority for Information and Communications. Masked gunmen intercepted the car in which he was traveling after he left his home in Baghdad's Ur neighborhood and took him by force to an unknown destination.
On 07 March 2020, Al-Tamimi, known for his moderation and professionalism, posted on his Facebook page a photo taken of him with his colleague, publisher and writer Mazen Latif, who was kidnapped on 31 January 2020 by a group of gunmen in civilian clothes riding in a shaded pick-up truck and taken to an unknown destination. He asked at the end of the post, "When are you coming back?"
On 02 March 2020, civil society activist Ali Sabah Al-Mousawi (picture 4), was arrested by government security forces while he was leaving Al-Tahrir Square and heading towards Abu Nawas Street. He is now being held in Al-Muthanna airport detention facility, where hundreds of peaceful demonstrators are being held in connection with their participation in the popular protests. Al-Mousawi has participated in Al-Tahrir Square protests since their inception.
For more information on recent human rights violations in Iraq, please see GCHR’s Third periodic report on violations during the ongoing popular demonstrations.
GCHR calls on the Iraqi authorities to: