KIDS IN THE HALL 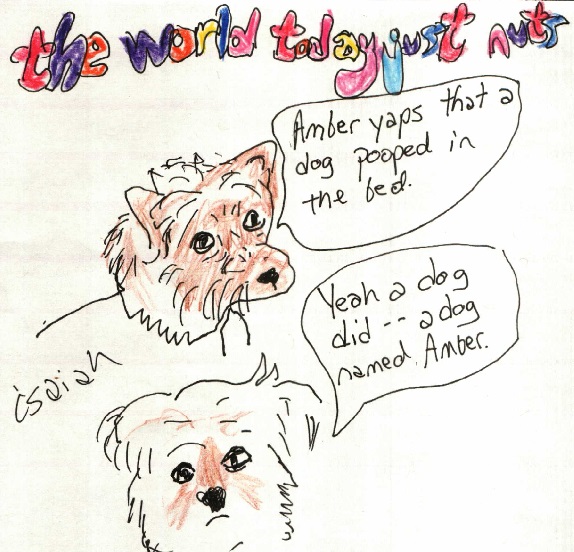 Isaiah's THE WORLD TODAY JUST NUTS "Johnny's Dogs Respond" went up Monday.   It's good.  You know what's not?  KIDS IN THE HALL.

I was so disappointed over the weekend because I went to AMAZON and watched the eight new episodes.

I figured it had to be just me.  Then I read Ava and C.I.'s "TV: THE KIDS IN THE HALL try to return" and not only did they also have a problem with the show, they put it into perspective.

There were too many sad sack characters.  That's not how it was on the original.  You had some people with hugely overinflated egos.  And that was fine and entertaining.

This was just sort of punching down.  And the skits about the AMAZON boss and his lackey Dave Foley played?  They didn't feel real and felt tacked on to try to give some sort of structure to the season.

I was really disappointed.  And how dare they not do a Tammy skit.

I loved the first five seasons of KIDS IN THE HALL but, maybe when the show ended in the 90s, they should have let it go.

Tuesday, May 17, 2022.  The US falls apart under Joe Biden's watch and he sends billions outside the country, Iraq is hit with another massive sandstorm and much more.

In the history of the socialist movement, parties and political figures are defined above all by their attitude to imperialist war.

On June 16, 1918, Socialist Party leader Eugene V. Debs was arrested and jailed for a speech opposing the US government’s involvement in World War I. Speaking to a large crowd in a park in Canton, Ohio, Debs called the war an imperialist war and denounced the Democratic administration of Woodrow Wilson and the capitalist governments of Europe for waging it.

“Every solitary one of these aristocratic conspirators and would-be murderers claims to be an arch-patriot,” Debs declared. “Every one of them insists that the war is being waged to make the world safe for democracy. What humbug! What rot! What false pretense!”

On May 10, every single Democratic Socialists of America (DSA)-backed member of Congress voted to approve Joe Biden’s request for $40 billion in military and financial aid for Ukraine.

Bernie Sanders, who once published a recording of himself reading Debs’ Canton speech, voted “yes” for war credits and said, “We should always have a debate, but the problem is that Ukraine is in the middle of a very intense war right now. I think every day counts, and I think we have to respond as strongly and vigorously as we can.”

Ocasio-Cortez, who knows nothing about the history of socialism, voted “yes” too. Hoping that people either would not notice or would quickly forget her vote, she refused to issue as much as a press release or tweet explaining her vote. The other DSA members of congress, Rashida Tlaib, Cori Bush and Jamaal Bowman, all voted “yes” as well.

The vote marks a crossing of a political Rubicon. It is an endorsement of the US/NATO war against Russia. It takes money out of the hands of working people confronting inflation and poverty at home and directs it toward death and destruction abroad. It dramatically increases the possibility of a world war between nuclear powers.

While Joe Biden and the Congress send 40 billion more dollars off to Ukraine, the US suffers.  Inflation, crumbling infrastructure and now shortages on formula.

The severe shortage of baby formula across the United States continues to affect millions of families. Nationwide, there is a 43 percent deficit of infant formula, with some states and metropolitan areas seeing more than 50 percent of normal supply missing from grocery store shelves.

Prices have risen by an average of 18 percent with increasingly common reports of price gouging emerging around the country.

Baby formula is a critical food product for millions of infants. Around three-quarters of all infants in the United States receive formula within their first six months, and many require it as their primary form of nutrition.

The shortage has been developing over the past two years as the pandemic disrupted supply chains, resulting in a roughly 20 percent shortage at the beginning of this year.

The issue was made significantly worse though when Abbott Nutrition was forced to close one of the nation’s largest formula manufacturing plants in Sturgis, Michigan. The plant was shut down in February after a bacterial outbreak in baby food sold by Abbott caused illness in at least four infants, killing two of them.

Abbott issued a voluntary recall of products made at the facility and shut it down as the Food and Drug Administration (FDA) conducted an investigation into the outbreak.

The company claims that the strain of bacteria found in the infected infants was not discovered at the plant. However, an FDA investigation conducted from January 31 to March 18 found multiple health issues in the facilities.

It would appear that a US president would have much to do in this country  and shouldn't be sending billions off to another land.  The world watches as Joe Biden's Build Back Better plan becomes Build Back Never.

We have long been told that there is no money for Medicare For All.  The US has now pledged over forty billion dollars to Urkaine.

But there was no money for Medicare For All?

Joe Biden will not guarantee the right of every American to health care but he will fund another useless war that has no real impact on the US and is a territorial issue/tiff that the US should have stayed out of instead of actively encouraging prior to the outbreak and funding non-stop since it began.

Any historical luster that Joe might have gotten for being vice president under Barack is now wiped away  for the ages because history  will not be kind about Urkaine and its massive racism that's so bad the Peace Corps has to issue warnings to their volunteers, that's so bad that U2's Bono and Edge show up on stage with a Ukraine musician who is flashing racism signs as the cameras snap away.

Is that why the media and Joe are backing Ukraine to begin with?  Racism supports racism?  Is that why so many in the US media felt it was perfectly natural to say that this battle mattered because the people looked like 'us.'  That they were 'blue eyed.'  That they were White.

Joe Biden has not just backed a racist regime (one he and Barack installed in 2014), he's sold America's future.

There was over forty billion dollars to spare and it couldn't be used to provide universal health care.  At a time when we don't have enough formula in the contry, he's sending over 40 billion to Ukraine.

The American epople suffer and Joe blows the money like some sort of gambling addict.

He's not fit to be president.  He never was.  He's an abject failure who deserves to be a one term president.

He assaulted Tara Reade and other women.  One of whom I have referenced here.  she loved him and it did not end well --even though she did what he asked (a regret she has to this day).   This is well known and was well known when she was crying in the halls of Congress.  With Roe appearing to be on its last legs, she's telling people she may go public and it'll be harder to dismiss her because she has witnesses and she has love letters.  Better get on the phone, Joe, and try to smooth things over somehow.

Hunter's actions have already exposed you as corrupt.  There won't be a lot of sympathy for you if she tells her tale.

He;s destroyed the country.  He has healed nothing.  He's trying to dismantle Medicare currently and everyones looking away on that.  He's not a friend to labor and he never was.  He'll gladly take a photo op with labor and then stab them in the back.

He's accomplished nothing but senile old men rarely accomplish much.

He's a crook who refuses to appoint a special counsel as his son is under federal investigation.  He lets a new-found 'friend' of his son pay off his son's $2 million dollar debt as he is a sitting presdient and we're not even supposed to notice that.  It's outrageous and goes to just how corrupt he is.

Iraq has been hit by its eighth sandstorm since mid-April, leaving hundreds of locals hospitalized and flights delayed, on Monday. The country’s capital Baghdad and southern cities were engulfed by the red haze, thereby reducing visibility to just a few hundred feet.

While dust storms are common in the country, an environment ministry official warned that Iraq could face ‘272 days of dust’ a year in the coming decades due to drought, desertification, and declining rainfall.