NETFLIX is supposedly about to 'crack down' on password sharing 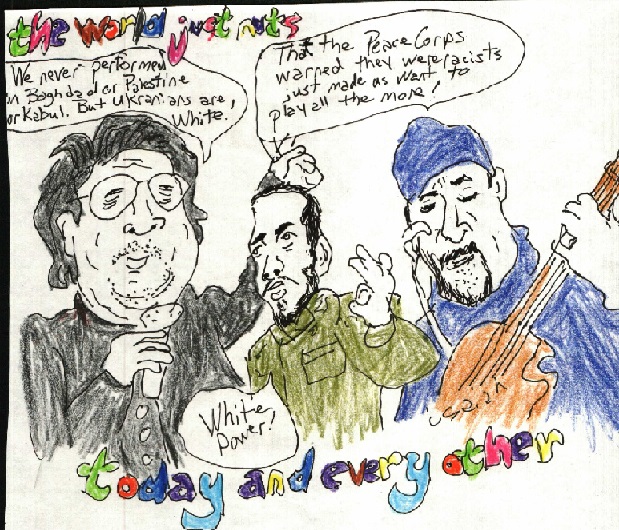 That's Isaiah's THE WORLD TODAY JUST NUTS "UTool Of Empire" and that's good.  It takes an African-American cartoonist to have the guts to call out the racism of Bono, The Edge and that Ukranian singer (who is doing the White power gesture -- and, yes, he really did do that).

I'm tired of my tax dollars going to racist regimes and proxy wars.

Sick of it, in fact.

Netflix Inc could introduce its lower-priced ad-supported subscription plan by the end of the year, earlier than originally planned, the New York Times reported https://www.nytimes.com/2022/05/10/business/media/netflix-commercials.html?searchResultPosition=1 on Tuesday.

The streaming pioneer is also planning to start cracking down on password sharing among its subscriber base around the same time, the report said, citing an internal note to employees.

How are they going to crack down on that?

I only use my passwords to my accounts.  But I've never understood how they can 'crack down.'

If I go over to my girlfriends and she doesn't have YOUTUBE TV, for example, I'll log in at her place and we'll watch it there.  I'll stream PEACOCK at work at lunch, to name another example.

Unless they're going to confine your usage to one location, I don't see how they can 'crack down.'  And we're far too mobile to be confined to one location.

Tuesday, May 10, 2022.   Iraq's ongoing political stalemate hits the seven month mark with no end in sight, Us forces shoot up Iraqi homes, and  much more

The Iraq War has not ended.  Yesterday, US forces opened fire on homes in Erbil.  ALSUMARIA TV reports that the US is saying this was an accident and a training exercise.  Let's accept that for the moment, if true, why were US forces -- there, we are told, only for training on basis -- out and about and firing on homes in Erbil?

No, it doesn't make sense.

The governor of Basrma town in Erbil governorate reported Tuesday that US forces mistakenly opened fire at several houses in the town, according to Baghdad Today news.

Other news reports indicated that six missiles fired by the US forces hit houses in a crowded area in Basrma injuring civilians.

ABNA 24 adds, "Released images of the incident show that civilian houses and vehicles were damaged in the area, but more details have not yet been released."

From 11 to 10, it is now May 10th, know what that means?  We'll jog memories.  October 10th, Iraqis turned out to vote.  All this time later, they've still failed to elect a president and have failed to name a prime minister-designate which means there's no real Cabinet.  Their term expired back in October.

And don't try to b.s. your way through that.  In 2010, the western press went along with then-prime minister Nouri al-Maliki's claim that Iraq had no vice president because there terms were expired and no new government had been elected.  So let's stop pretending that there's a legal cabinet from the holdover government.

It's now seven months after the election.

In 2010, Iraq set the record for the longest time between an election and finally forming a government -- eight months.  Now unlike the floundering Moqtada al-Sadr today, in 2010, the problem was Nouri refused to step down.  He lost and he wouldn't step down.  Originally, the US government said they would stand with the winner.  Then Samantha Power bent Barack Obama's ear and they started backing the loser -- Nouri.  They would go on to negotiate The Erbil Agreement which would toss the votes of the Iraqi people aside and give Nouri a second term -- which would result in the rise of ISIS in Iraq.

It may not be a record to be proud of, but, hey, at least it's something. Iraq has now not had a government after a parliamentary election longer than anybody, ever. The Washington Post is reporting that the Netherlands held that honor until today, back in 1977 they went without an elected government for 207 days, today marks Iraq's 208th.

Leila Fadhil of the Post quotes one of the great Iraq watchers and a Dutchman himself, Joost Hiltermann.

"There is no difference with the Iraqi case, except that the Netherlands had strong, functioning institutions and a caretaker government that continued to govern," said Joost Hiltermann, a Dutch national and an expert on Iraq at the International Crisis Group. "Iraq has very weak institutions and a caretaker government that can do very little. This makes for a potentially highly unstable and precarious situation."

The election was close, incumbent Prime Minister Nuri al-Maliki's Shi'ite party won 89 seats in parliament, while former Prime Minister and secular Shi'ite Iyad Allawi's party won 91 seats. And, it being Iraq, there are other parties and players that also have been angling for power. Negotiations, now in their 208th day, have produced no result.

Now in 2010, Nouri refused to accept losing, refused to step down, refused to move out of the prime minister's home, etc.

There has been no such refusal this go round.  But seven months later, it's seven months now, and it's still not been resolved, the political stalemate has continued because of ineptitude.

Now the Constitution -- which is never followed -- has the way for a prime minister-designate to move over to the prime minister by forming a Cabinet.  Now that's not followed.  Even when, like Hayder al-Abadi, they swear that it's going to be followed this time.

The reason for that being in the Constitution?  If you can't form a Cabinet, you can't govern.

To form a Cabinet, you have to make deals, do horse trading, prove you can work with the majority.

No one's done that, they haven't followed that aspect of the Constitution once.  So it's no surprise that the various government's have failed the people and refused to address their needs.

But grasp that the failure right now is happening not with the Cabinet forming.  It's no where near that level yet.  You have various groups and none can horse trade, none can work with others well enough to form a government.

This is a new low and it should alarm the international community.

But there's no honesty in the international community.

When they do bother to realize that this not normal and should not be acceptable, they rush to shame the Kurds.

How many times has it been explained that the Kurds are a minority population in Iraq?

Now of Kurds who chose to vote, the majority are represented by the KDP while the PUK political party represents the next largest group of voters.  (The KDP got 31 seats while the PUK got 18 seats.)

This is not the fault of the Kurds.  Quit blaming them.  The KDP is siding with Moqtada al-Sadr while the PUK has sides with the Coordination Framework (which is run by many -- including Nouri al-Maliki).

This is beyond stupid to blame the Kurds. Now, yes, usually the western world is able to blackmail or guilt the Kurds into this or that.  It's why there is no Kurdish homeland to this day.  They are the largest ethnic population on the planet without a nation-state.

Shi'ites are the dominant group in Iraq.  And Moqtada's grouping -- no this political party -- got 73 seats.  Other Shi'ite groups did well also.  Nouri's State of Law got 33 seats.

The PUK and the KDP are split, they're not united.  One of the reasons is that the PUK has had the presidency since the US invaded Iraq.  Back then the PUK and the KDP were close to the same level of popularity.  However, since the Talabani family defrauded Iraq (pretending Jalal was healthy and recovering when he couldn't speak and he couldn't move and should have been replaced as president), their polarity has soured.  Gorran, with the help of CIA-seed money, managed to overtake the PUK.  And then they decided to get in bed with the PUK and had a disaster at the polls in October.  But the KDP feels that they should have the presidency -- by custom, Iraq awards that office (largely ceremonial) to a Kurd, the Speaker of Parliament goes to a Sunni and the prime minister is a Shi'ite.

Moqtada, representing one Shi'ite faction, and Nouri representing aonther?  Those are where the big votes are.  The PUK, for example, could be dropped immediately without any real loss if the Coordination Framework was able to appeal to others -- Shi'ites, Sunnis, minority candidates, etc.

This has been an abject failure.

It also gets to how wrong Moqtada and others have been claiming the problem was the system of government and that's why he was going to come up with a different formation -- he was going to do a national majority government.  That was the answer.  Well it hasn't been and the problems appear to be even worse with what Moqtada's attempted.  Yet, Moqtada's MP Hassan al-Adhari tells ALSUMARIA that they are still pursuing that majority government.

April 1st, he bowed out.  He announced a forty day hold on his actions.  He wanted to see if his opponents could form a government (or he wanted to prove that they couldn't -- depending upon how you look at it).

This has all been one long failure and the problem isn't the Kurds no matter what the western press screeches and hisses.  These are the same whores, remember, who told you that Moqtada was a "kingmaker."  He had no experience being that, but whores make their money from inflating tiny things -- i.e. "No, baby, it's huge.  I've never seen one that big before."

And that's what they did with Moqtada.  They lied then, they lie now.

Meanwhile, ALMADA's Hussein al-Amel reports that hundreds of graduates shut down Dhi Qar Oil Company as well as the Directorate of Education wih a sit-in as they demanded job opportunities.  In the meantime, oil workers have been sent home.  In April, the Iraqi Army destroyed the base the activists were operating from -- including their tents -- when they stopped their sit-ins to observe Ramadan.

In yesterday's snapshot, we noted the rise of Crimean-Congo hemorrhagic fever (CCHF) in Iraq  This morning, RUDAW reports:

The Kurdistan Region on Tuesday recorded the first case of Congo fever amid an outbreak in Iraq’s southern provinces.

Erbil General Directorate of Health reported the first Congo hemorrhagic fever in the city. The infected person is 17-year-old and has been hospitalized.

The directorate did not disclose further details.

The Crimean-Congo hemorrhagic fever, also known as Congo fever, is tick-borne and causes severe hemorrhaging, according to the World Health Organization (WHO). It has been endemic to Iraq since 1979 and reappeared again last year.

We'll wind down with this from The Feminist Majoarity: