Now here's the box office from the weekend via THENUMBERS.COM:

I want to zoom in on numbers 8 and 9.  FANTASTIC BEASTS is a bomb.  It opeend with only $45 and I've noted before that firing Johnny Depp and releasing the movie during the middle of his trial wasn't smart.  It's now limping towards $100 million and may not make it. It needs to make 7 million more and interest is waning in the film.  ThE LOST CITY coast much less to make.  It's going to make $100 million.  And that's even with it now being available to rent or buy and being on PARAMOUNT+.   It's made $99.3 million and it stands a good chance of hitting $100 million on Thursday night.

FANTASTIC BEASTS is not the only big budget one that's faltering.  I kept hearing on the radio today about how it's made X millions worldwide.  I see now why.

It's not doing well in the US.  It had another huge drop off and I have to wonder if it's because of that actress who had a small part in the first DOCTOR STRANGE being convicted, with her husband, for abusing and assaulting children?

Or maybe people just aren't enjoying the film as much as I did?

On SCHEER INTELLIGENCE, Robert Scheer is joined by Ray McGovern and John Kiriakou


Robert Scheer (02:16):
But nonetheless, here you have Ray McGovern who gave back his Intelligence Commendation Medal in response really to the revelations that came from you. What I want to do, you are two guys who tried to serve your country, did so, were honored for that … you, John, and promoted after the capture of what was supposed to be the highest known captured Al-Qaeda member. What happened was that you have run into a really … I don’t know, I think of Lillian Hellman when she wrote about the McCarthy period. She had a book called Scoundrel Time. And really, you’re in a period now where you guys are in danger of being considered fake news, making up news. You’re going to be made non-person. In fact, just doing this discussion with you, and I’ve interviewed you both before, the whole program could be dismissed as fake news. We haven’t lived in a time like this where suddenly people who really know a great deal and are speaking honestly … in John Kiriakou’s case, he served two years in jail for having revealed aspects of the torture program. But the fact of the matter is, you’re being made into non-persons. In fact, you now can only get a forum if you go on something … well, we don’t have RT anymore.

Yet another sandstorm has hit Iraq, once again sending people indoors and to hospitals.  IRAQ OIL REPORT's Lizze Porter Tweets:

The colour of the sky in #Baghdad this morning. #Iraq has been hit with another sandstorm - there’ve been 8 or 9 since mid-April. This time there is a fairly strong wind, too, making the dust-filled air even more unpleasant. Officials say the storms are linked to climate change. 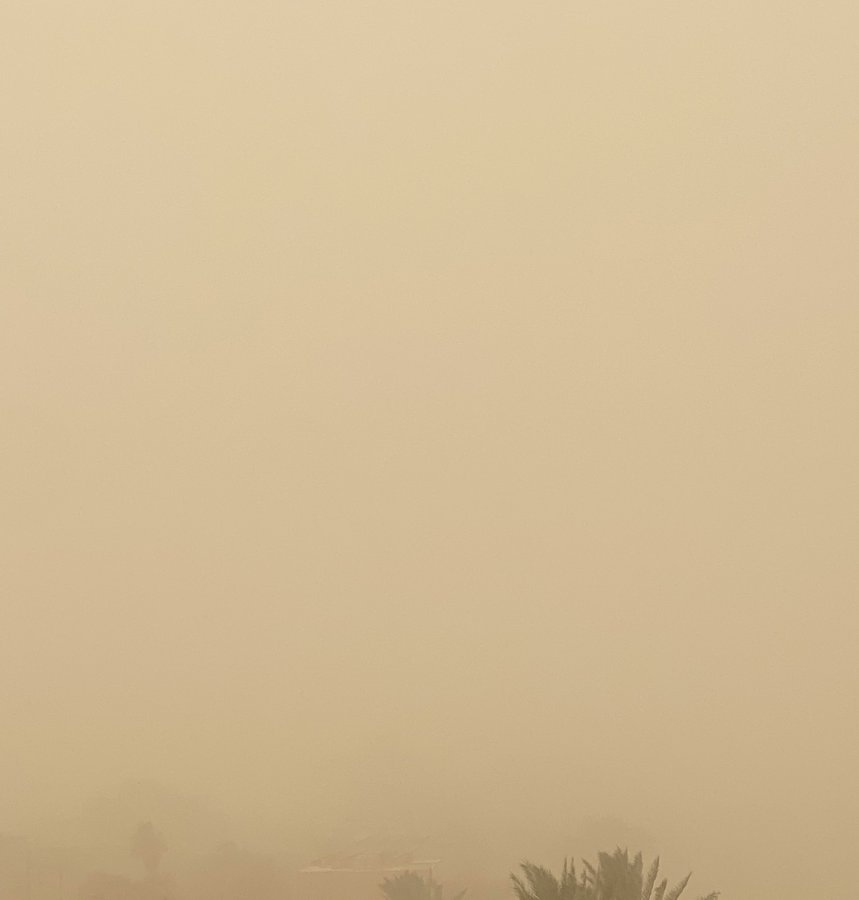 Air traffic was suspended in airports across Iraq as the ninth sandstorm since mid-April hit the country. International airports in Baghdad, Erbil and Najaf issued conforming statements.

Iraqi Prime Minister Mustafa al-Kadhemi ordered all work to cease temporarily in public institutions, with the exception of health facilities and security agencies, according to AFP.

Sinan Mahmoud (THE NATIONAL) adds, "Almost all of Iraq will be hit by the latest storm which could last until Tuesday afternoon and is expected to cross to the Gulf States, it added."  Raul Tweets:

Another sandstorm has hit Iraq, injuring hundreds of locals. All airports have halted operations, and state institutions declared a day off. Over 5,000 citizens in one day went to hospitals with complaints of suffocation. #Iraq #Sandstorm
6:36 AM · May 23, 2022

Another sand storm hits #Iraq, warning us that this has become the norm more than the exception. So what happens when armed conflicts collide w/ climate risks? and what should we do to strengthen the climate action? #ICRC report

Iraq's Lake Hamrin, a once-vast reservoir northeast of Baghdad that is the sole source of water for irrigation across Diyala province, has nearly dried out, a senior official said Friday.

A shepherd in a village in Kirkuk was forced to sell most of his sheep because of poor pasture conditions for his animals and out of 300 sheep, only 27 of them are left.

Ahmad Khorshid has had a difficult year because of the drought.

“Everything is expensive now. If fodders were available and cheap like before, I could have survived. No one shepherds because of the lack of pasture,” he told Rudaw’s Hardi Muhammad Ali on Friday.

Khorshid has spent most of his life working as a shepherd in Jabal Bawr village, Kirkuk, but this is the first time he experiences such a lack in adequate pasture for his herd.

World-renowned Iraqi Arab communist poet Muzaffar al-Nawab died on May 20. He was beloved by Arab masses for language that spoke to peasants & workers, and for brilliant takedowns of corrupt Arab regimes, U.S. imperialism, and Israeli colonization & occupation. #مظفر_النواب 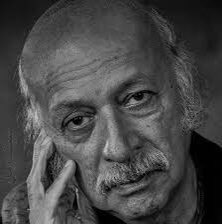 Al-Nawab was born in Baghdad, Iraq, in 1934 into an aristocratic Shi'ite family of Indian origin that appreciated art, poetry and music.[3][4][5][6] He showed a talent for poetry from an early age. He completed his undergraduate studies at the University of Baghdad and became a teacher, but was expelled for political reasons in 1955 and remained unemployed for three years, at a difficult time for his family who was suffering financial hardship.[7]

He joined the Iraqi Communist Party while still at college, and was tortured by the Hashemite Government. After the Iraqi revolution in 1958 which overthrew the monarchy, he was appointed an inspector at the Ministry of Education. In 1963 he was forced to leave Iraq to neighbouring Iran, after the intensification of competition between the nationalists and the communists who were exposed to prosecution and strict observation by the ruling regime. He was arrested and tortured by the Iranian secret police, before being forcibly repatriated to the Iraqi government. An Iraqi court handed down a death sentence against him for one of his poems, later commuted to life imprisonment. He escaped prison by digging a tunnel and fled to the marshlands, where he joined a communist faction that sought to overthrow the government.[8]

Known for his powerful revolutionary poems and scathing invectives against Arab dictators,[9] he lived in exile in many countries, including Syria, Egypt, Lebanon and Eritrea, where he stayed with the Eritrean rebels, before returning to Iraq in 2011.[1] Before he returned to Iraq, he had been essentially stateless being able to travel only on Libyan travel documents. The first complete Arabic language edition of his works was published in London in 1996 by "Dar Qanbar"[10] He died on 20 May 2022 in the University Hospital Sharjah in the UAE.[11]

Muzaffar Al-Nawab was imprisoned and tortured by the Iraqi monarchy for associating with the growing Iraqi Communsit Party. Muzaffar always stood firm in his revolutionary ideals We mourn the loss of a great Iraqi poet. 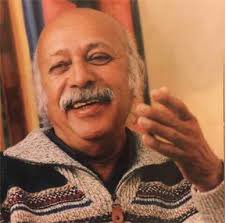 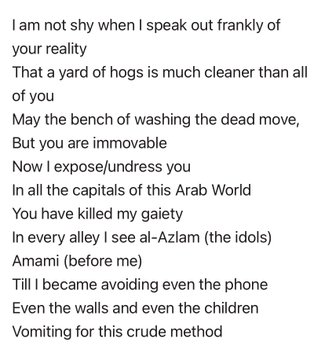 Muzaffar Al-Nawab is a celebrated Iraqi poet. He was born in 1934 to a wealthy family in Baghdad. After studying literature and becoming a teacher, he began to associate with the Communist movement in Iraq. For this he was imprisoned and tortured by the oppressive Hashemite regime; however, following, the overthrow of the Iraqi monarchy in 1958, Al-Nawab was offered a position at the Iraqi Ministry of Education. As political tensions continued between nationalists and communists, Al-Nawab was forced to flee Iraq because of his communist allegiances in 1963. He was arrested again, this time for writing poetry critical of the Iraqi Republic. He was able to escape prison and continued writing dissident poetry.

Despite, or perhaps because of his political troubles, Al-Nawab's reputation grew steadily in the 1960s. His work spread across the Arab world and was as inspiration to those standing against political regimes. As he writes in "v-Letter-Word," his work was seen as a rallying call to all those that wished to "speak out frankly of your reality." Further expanding his notoriety, many musicians set music to Al-Nawab's work. After his exile from Iraq he continued to move around Arab countries, including Egypt and Lebanon. Due to the controversial nature of his work, it was not published officially until 1996, however much of has become available on the internet. Still, it is incredibly difficult to find in printed form and many bootlegged copies circulate, though an official poetry collection was again released in 2010. Al-Nawab returned to Iraq in 2011 where he has been reportedly suffering from Alzheimer's.

#Iraq : Funeral of renowned poet Muzaffar al-Nawab in Baghdad - famed for his revolutionary ideals & revolutionary use of language #مظفر_النواب #الْعِرَاق 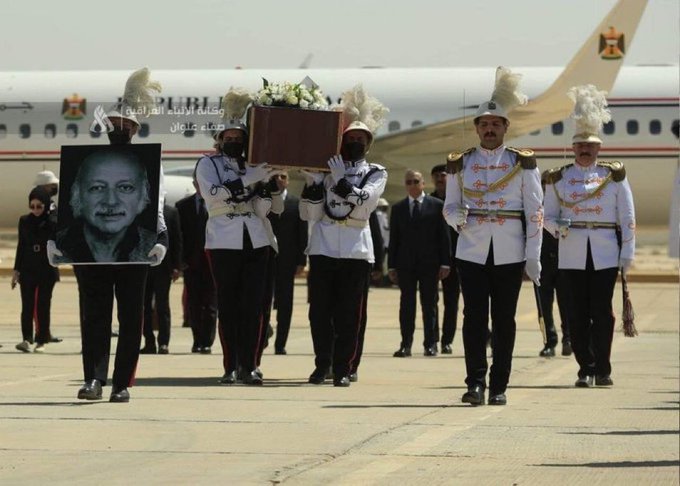 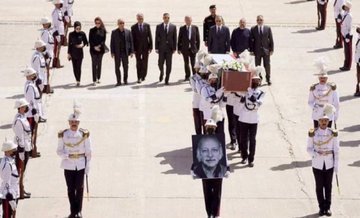 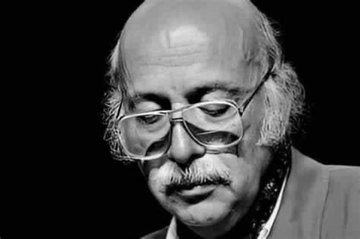 He last visited Iraq in 2011, when he was received in grand pomp by the presidency. Prime Minister Mustafa al-Kadhemi called Friday for his body to be repatriated by ministerial aircraft.

The poems of Nawab, who was unmarried and had no children, were often evoked during the autumn 2019 wave of youth-led anti-corruption protests that swept Iraq.

"Why did Muzaffar al-Nawab die in the Emirates?... Because you've governed Iraq for 19 years, because Baghdad hospitals do not treat patients, because the country is not livable," Iraqi journalist Omar al-Janabi tweeted.

Yes, his work and life spoke to The October Revolution.  So what happened was no surprised except for people who don't have time to pay attetnion.  Desperate to hold onto his post as Prime Minister, Mustafa al-Kadhimi tried to turn the day into a photo op for himself and the youth weren't having it.   MIDDLE EAST EYE reports:

Iraqi Prime Minister Moustafa al-Kadhimi was forced to leave the funeral of the country's renowned communist poet Muzaffar al-Nawab on Saturday after a section of mourners began chanting slogans of contempt at his delegation.

The funeral procession started peacefully at the Association of the Iraqi Writers in Baghdad’s Karrada neighbourhood after the wooden casket containing the poet's body arrived from the airport.

A few minutes later, some of the mourners started shouting slogans against the prime minister and Iraq's political elite.

Waving Iraqi flags and pumping their fists in the air, they shouted "The people want to bring down the regime," and "Oil is for the people not for the thieves."

The chaos forced the pallbearers to return Al Nawab's casket to the hearse and speed away with Mr Al Kadhimi's convoy.

Some of the mourners pelted the convoy with stones, bottles of water and shoes as it left.

We'll wind down with this from Nancy Hanover (WSWS):

The children of Flint, Michigan have been doubly ravaged—by lead poisoning and more than two years of SARS-CoV-2 infections and deaths. Now in the sixth wave, COVID cases in Flint’s Genesee County are rising by 69 percent, and despite ongoing outbreaks, schools remain open face-to-face. At the same time, a lawsuit now alleges that the city’s young people “acquired brain injuries” due to ingestion of lead.

The contamination of Flint’s water at the hands of General Motors, Governor Rick Snyder, and the entire city, state and national Democratic and Republican establishment exposed nearly 30,000 schoolchildren to lead, a neurotoxin that attacks developing brains and nervous systems.

The current class action lawsuit, one of many, targets engineering consultants contracted by the city (Veolia North America and Lockwood, Andrews & Newnam) during the 2014 switch to Flint River water. It has brought to light some of the devastating and widespread educational and mental health challenges the city’s children and their teachers face.

Testifying on May 10 and 12, neuropsychologist Mira Krishnan provided evidence that Flint children are suffering brain injuries due to being subjected to lead-in-water.

Dr. Krishnan, a specialist in neurodevelopmental disorders and impacts of complex trauma, examined four children, who she said exhibited hyperactivity, impulsivity and weaknesses in various subject matters in the classroom. Such problems can amplify over a lifetime. One of the children, she said, showed impairments that “very rarely would be seen in a random sampling of children from the community ... who didn’t have some sort of brain injury.”