Ann and Stan here to look at the best in film that, in 2017, you could catch on your own screen -- be it a 60 inch flat screen or the cell phone in the palm of your hand.


On our list you won't find REMEMBER ME or OUR SOULS AT NIGHT  despite amazing turns by Rita Moreno and Jane Fonda in each.  The films were weakly directed and poorly written.  Moreno and Fonda deserve huge applause for what they accomplished against all odds.

Among the comic films, only LOGAN and SPIDER-MAN: HOMECOMING were even potential top ten-ers.  We were highly unimpressed with WONDER WOMAN and its WWI setting.  With the film, Patty Jenkins proved she can fill seats in auditoriums so maybe next go round she can try proving she put something worthwhile on the screen?

Search your mind and try to figure out what the number 63 best selling DVD was for 2017.

Did you guess THE PROPOSAL?  Because that was the answer.

We love the movie.  But we'd argue it's a best seller still, eight years later, because audiences want films like that even though the studios appear to believe the genre died with Nora Ephron.

Channing Tatum may be the best thing to happen to Steven Sodenberg in the latest act of Sodenberg's directing career.  MAGIC MIKE, HAYWIRE, SIDE EFFECTS and now LOGAN LUCKY -- he's never had an actor as flexible before.  Whether he's the muse or just the conduit, Channing's lucky for Sodenberg and the rabbit foot is especially promising this go round.  LOGAN LUCKY rests on Channing's soldiers and he carries the picture with no visible struggle. His scenes with Farrah Mackenzie (she plays his character's daughter Sadie) are probably the finest scenes between an adult and a child actor since PAPER MOON.  The entire cast -- which includes Hillary Swank, Daniel Craig, Katie Holmes, Sebastian Stan and Seth MacFarlane -- delivers and Sodenbergh's created another classic.


2) THE KINGSMAN: THE GOLDEN CIRCLE

This sequel could have been our pick for the number one film of 2017.

As noted at THIRD already, she is the weakest part of the film.  She's playing a villain in an action adventure film with comedic elements.  Did she think this was the time to walk through a film?

In smaller roles, Halle Berry and Channing Tatum deliver.  But Julianne Moore appears to believe she's appearing in an episode of MODELS INC.

Samuel L. Jackson helped the first KINGSMAN movie deliver by stretching in the role of the evil villain.  Moore acts as if she'd just gotten botox on her acting chops.

We'll probably never be able to just enjoy a Kevin Spacey performance again.  But last year, BABY DRIVER was a refreshing surprise and, yes, that included Spacey's strong supporting turn. Edgar Wright took a flimsy genre and a tired premise and made a film full of life and entertainment.   Had Spacey not self-destructed, he and Jamie Foxx might be looking at Academy Award nominations.  Instead, Spacey's probably torpedoed CJ Jones' chance as well.

We'll always have BABY DRIVER -- the film and Ansel Elgort's wonderful performance in the title role. 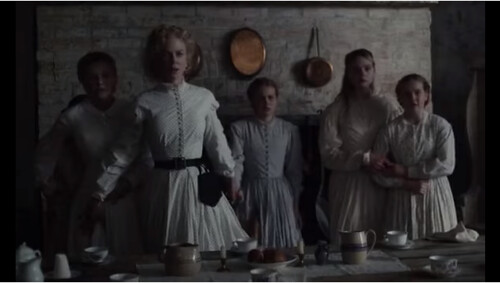 Sofia Coppola's latest film is a tight drama about the snake (Colin Farrell) entering the garden and the effect this has on Nicole Kidman, Kirsten Dunst and Elle Fanning -- among others.  Riveting and one of Coppola's best.

5) GHOST IN THE SHELL 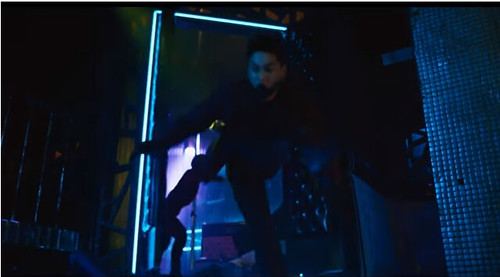 Incredible stunts carried this film onto our year's best.  As with LUCY, Scarlett Johansson has created another action film that makes you think.  Forty years from now, this will be the BLADERUNNER everyone wants to update. 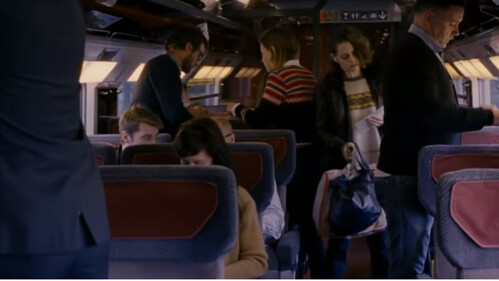 Tired of the faux films by paint-by-number 'artists' Patty Jenkins and Steven Spielberg?  Then we hope you checked out Olivier Assayas' PERSONAL SHOPPER which finds Kristen Stewart at the height of her abilities in this engaging supernatural film.  It's like nothing the major US studios released in 2017.

We wish this film were more than it is.  But what is it?

COLOSSAL was a complete surprise.  What Jason Sudeikas won't do for love?  That's one way of seeing this Anne Hathaway film.  It's the sort of movie you might have envisioned in the mid-90s when it seemed an indie film movement was going to save us from the recycled nothingness of so much studio product.

KIDNAP is nothing but studio product -- with a strong reminder that when its paired with a strong director (Luis Prieto) and a strong actress (Academy Award winner Halle Berry), film making can be so much more than just product.

Brad Pitt's not showed as much life since 12 MONKEYS.  WAR MACHINE is a film that's perfectly cast -- including a rare turn by Meg Tilly (Academy Award nominated for AGNES OF GOD). A film with big ideas is a rare thing but this adaptation of Michael Hastings' THE OPERATORS proves it can be done and it can be done well.

Friday, December 29, 2017.  Iraq is largely absent from the national conversation and the few times it pops into the exchange it's tightly controlled.

This is your government.


US special operations troops are secretly harboring and training former fighters of the Islamic State in Iraq and Syria (ISIS) at the remote American base in Al Tanf, Syria near the strategic nexus of the country’s borders with Iraq and Jordan, according to a report issued by the Russian military command.
The charge was made Wednesday by General of the Army Valery Gerasimov, chief of the Russian military’s general staff and deputy defense minister. He said that Russian drones and satellites had detected brigades of ISIS militants in and around both Al Tanf and another US military base near the Kurdish-controlled city of Al-Shaddadi in the country’s northeast.
“They are in reality being trained there,” Gerasimov said in an interview with the Russian daily Komsomolskaya Pravda. “They are practically Islamic State,” he added. “But after they are worked with, they change their spots and take on another name. Their task is to destabilize the situation.” The Islamist fighters, he indicated, are being re-branded as the “New Syrian Army.”

He also notes Quentin Sommerville and Riam Dalati's BBC report about how the US and UK aided the Islamic State in departing Iraq:

Abu Fawzi and dozens of other drivers were promised thousands of dollars for the task but it had to remain secret.
The deal to let IS fighters escape from Raqqa – de facto capital of their self-declared caliphate – had been arranged by local officials. It came after four months of fighting that left the city obliterated and almost devoid of people. It would spare lives and bring fighting to an end. The lives of the Arab, Kurdish and other fighters opposing IS would be spared.
But it also enabled many hundreds of IS fighters to escape from the city. At the time, neither the US and British-led coalition, nor the SDF, which it backs, wanted to admit their part.
Has the pact, which stood as Raqqa’s dirty secret, unleashed a threat to the outside world - one that has enabled militants to spread far and wide across Syria and beyond?

In the Arab world, the accusation has long been that the US government created and sponsored the Islamic State.

This was due to a number of US actions in the region and around the world including the fact that the US empowered the Taliban (don't forget to include Mika's nasty father -- and nasty is right, so many women spoke of his actions towards them -- on the blame list).

But it also included strange moments that would appear to question where the loyalties were.

It's very strange that the BBC can report on Raqqa but the US press will ignore it.

Because the BBC reports it doesn't make it true.  But when the US response is silence, it certainly makes it appear true.


When does the American media cover these topics?

If they can put it in the mouth of the 'enemy.'  So, last June, Tom O'Connor (NEWSWEEK) writes about how the Iranian government claims it has documents which demonstrate that the US government has been backing ISIS.

Now when, earlier this month, Amnesty International documented the fact that ISIS was using US-made weapons, CNN did cover it.  But there was Jim Michaels (USA TODAY) to the rescue, days later, to explain that the weapons "fell into the hands" of ISIS.  The press then dickered over whether they were stolen or sold by non-US actors (usually Syrian 'rebels' were cited).

But we're never to consider what so many in the Middle East believe: That the US government has been backing ISIS all along.


None of the above means that the US funded/created/supported/one-or-all-of-the-above the Islamic State.  The point is this topic is discussed around the world, in traditional media and on social media, but the corporate media in the US will not have the conversation, will not allow it.

That, more than anything else, lends credence to the rumors and allows them, over time, to be accepted as truth.


The question isn't do governments lie, it's do they ever tell the truth?

Congress Rajya Sabha MP Pratap Singh Bajwa on Wednesday accused External Affairs Minister Sushma Swaraj for blocking him on Twitter for raising the issue of 39 Indians missing in war-torn Iraq.
Bajwa tweeted, “Is this the way to run external affairs ministry? Does it behove the office of Sushma Swaraj Ji to block a Member of Parliament for asking tough questions on 39 missing Indians in Iraq?” and shared a screenshot that read “@SushmaSwaraj blocked you.”
[. . .]
The Punjab Congress president Bajwa has been accusing the Foreign Minister of misleading the House on 39 Indians missing in war-torn Iraq.


The 39 Indians have been missing since June of 2014.  In June of 2016, the editorial board of THE HINDUSTAN TIMES observed:

Perhaps it is this optimism that guides the families of 39 Indians who are missing from Mosul (Iraq) for the past two years. In June 2014, the Islamic State (IS) was capturing town after town and taking civilians (especially foreign nationals and minorities) hostage. In Mosul, 40 Indian construction workers, mainly from Punjab, were captured, and one person managed to escape. The whereabouts of the 39 is unclear. The government has maintained that it has credible intelligence that the hostages are alive, while media reports state that they have been executed.

Kurdistan 24 English‏Verified account @K24English 2h2 hours ago
A group of unknown gunmen on Thursday night launched a rocket attack on an #Iraq|i military convoy, and five members of the Hashd al-Shaabi were wounded in two roadside bomb explosions in the latest string of incidents to rock #Kirkuk. #TwitterKurds
2 replies8 retweets9 likes

Unidentified gunmen shot dead three family members inside a house early Friday morning at a village in Iraq's central province of Salahudin, a police source told Xinhua.
The attackers broke into the family house in the town of Es'haqi, some 60 km south of the provincial capital Tikrit, and opened fire on the family members, killing three men, wounding two women and two children, the source said on condition of anonymity.

You will never know the names or circumstances under which they died. Or, even if they were US citizens (roughly one-third of DOD contractors are Americans).
3 replies28 retweets27 likes

Because contractors are barely acknowledged and have no identities, their expanded use under 3 presidents makes US military footprint appear artificially smaller.
2 replies36 retweets40 likes

Hope someday defense analysts and journalists recognize the essential, enabling capabilities contractors provide when writing about US wars. As is, "contractor" is a dirty word or an after thought. END
1 reply14 retweets21 likes


And the big question this morning -- bigger than who will pay for the rebuilding of Iraq --  comes in a Tweet from Tim Anderson:

How many used their voices to speak out against these wars? #Afghanistan, #Iraq, #Lebanon, #Libya, #Syria, #Yemen. All driven by #Washington, all on false pretexts. youtube.com/watch?v=JCUzRy…