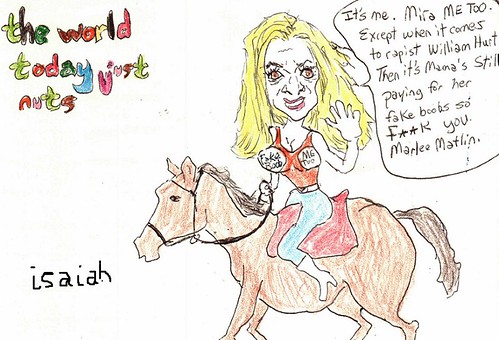 Above is Isaiah's THE WORLD TODAY JUST NUTS  "Mira On Her High Horse" from Sunday.

Sunday also saw the broadcast of The Grammys.

USA TODAY has an article about why they feel the Grammys have become so worthless.

The ratings for the broadcast?

Why would people watch?

I remember thinking last week, "Oh, I won't be watching."

He was in the news again for trashing Donald Trump.

He released his worst album ever at the end of last year and yet he's got time to talk smack about Trump?

Maybe focus on the music.

I didn't want to hear a bunch of Donald Trump bashing.

I wasn't in the mood.

I'm not a fan of Donald.

But I've got better things to do with my evenings.

And so I luckily got to miss Hillary Clinton and all her nonsense.

The Grammys aren't about music so why bother to watch?

The reality of war: #KillAnythingThatMoves

No targeting civilians but that's what the US dropping bombs on Iraq has repeatedly done.  Most recently, civilians were killed on Saturday.


Iraqi security forces killed in airstrike carried out by US-led coalition forces near US airbase, victims were mistaken for militants - officials on.rt.com/8xwe 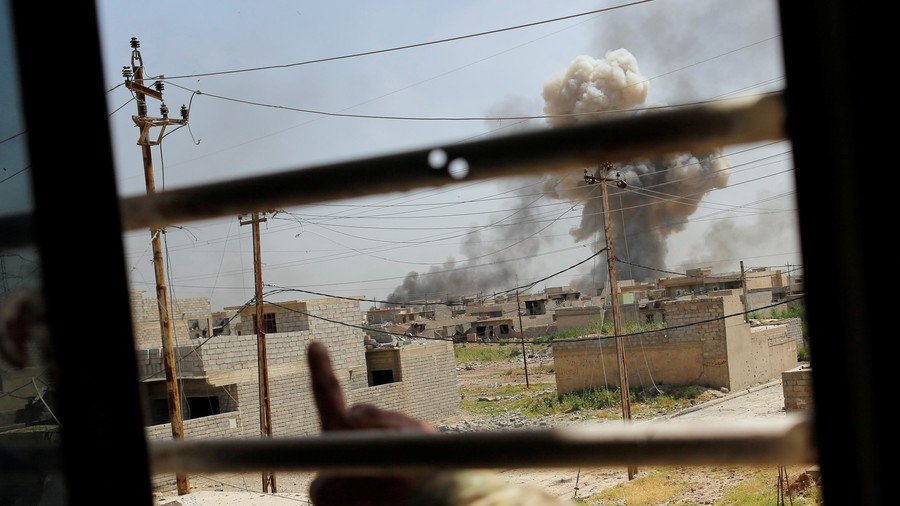 At least 8 people were killed in the strikes.  And a detail being Tweeted outside the US includes:

The Iraq War continues and the dying continues.  For many, it's appalling to watch those who sold the Iraq War skate away from their crimes.

“Thanks for the feminism”, she says as she stands on the corpses of Iraqi, Libyan and Syrian women. 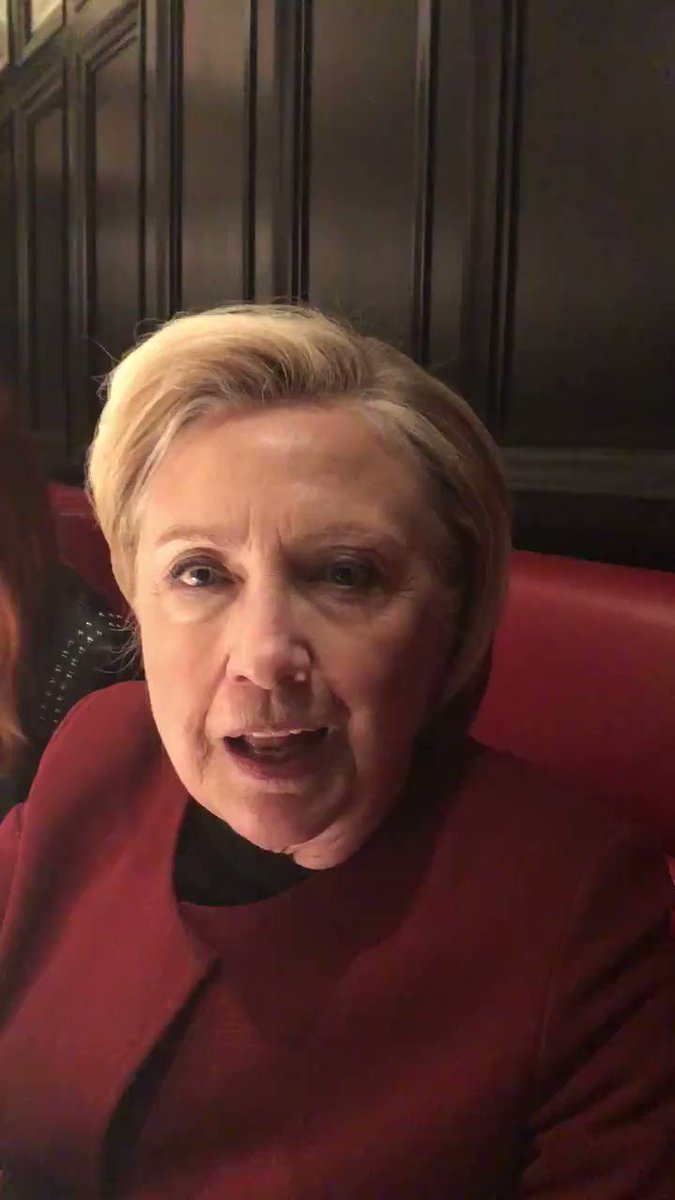 A message "to all the activist bitches supporting bitches" by the inimitable @HillaryClinton.
Show this thread

Hillary sure talks a lot for someone who's never learned to say "I'm sorry."  As for her 'feminism,' she insisted that "we deserve to be heard" as she spoke of a woman on her campaign who was harassed and her harasser was not fired.  That was bad enough.  But "we deserve to be heard"?  Hillary 'speaks for' the woman only because she was forced by Hillary to sign a Non-Disclosure Agreement that prevents her from speaking.

"We deserve to be heard," Hillary?

Then remove the gag order you placed on the woman.

Hillary is one of the all time biggest fake asses.


I just realized Trump hysteria is only half the reason Dubya is beloved by a majority of Democrats today. The other half is because Democrats spent 2016 gaslighting themselves into believing that a warmongering neocon who supported the Iraq invasion would make a great president.

Hillary's hardly the only fake ass.


every time dems normalize and mainstream Frum, Kristol and Bush they're saying Iraqi lives simply don't matter; that their deaths are less important than short term partisan PR advantage. At least acknowledge this.

This is appalling and yet so many pretend it's not happening.  I'm hoping this one actually missed it:

Dems are doing this? Who? Name them so we can steer clear of them.

We have many times, including in January 24's Iraq snapshot:


Starting with these two Tweets:


To see what a hilarious trainwreck @DavidFrum's Reddit AMA was, read this spin.com/2018/01/david-… - people forget that beyond all the Iraq War propaganda, this #Resistance hero co-wrote one of the most insane & evil books of the last two decades with **Richard Perle**

Anyone promoting Bill Kristol today is a hack (at best) or a War Hawk.

The 'resistance' is a media creation, not a movement.  They have no ethics and they rush to embrace liars responsible for the Iraq War.  That explains why so many support Hillary Clinton to begin with.  She pimped the Iraq War.  In 2008, she offered a tiny 'apology' when she was losing the primaries to Barack Obama and he was hitting her over the head for her Iraq War vote daily.  By 2016, that 'apology' had morphed into her declaring her vote was correct and Bully Boy Bush carried out the war wrong.

She reTweeted Bill Kristol and then so did her mindless whores.

It was so funny to watch so many -- including children's books author and horror hag Jamie Lee Curtis -- reTweet that garbage.  Apparently, love of children doesn't include Iraqi children.

Jamie Lee Curtis might think being born with a penis was mutilation but the real mutilation can be found in Iraq.

From JUSTICE FOR THE BABIES OF FALLUJAH:

Another male born in FGH with multiple gross congenital anomalies in addition to CHD , he is the 1st baby to 2 young healthy couples with no previous history of any anomaly

Iraq is poisoned. Thirty-five million Iraqis wake up every morning to a living nightmare of childhood cancers, adult cancers and birth defects. Familial cancers, cluster cancers and multiple cancers in the same individual have become frequent in Iraq.
Sterility, repeated miscarriages, stillbirths and severe birth defects - some never described in any medical books - are all around, in increasing numbers. Trapped in this hellish nightmare, millions of Iraqis struggle to survive, and they call for help.

Somehow, Jamie Lee, your nonsense from TODAY I FEEL SILLY AND OTHER MOODS THAT MAKE MY DAY don't really cut it for what's going on -- continuing to this day -- in Iraq.

And all the children who have suffered because of the Iraq War are erased and silenced when you stoop to reTweeting Bill Kristol and presenting him as someone to listen to.

Hillary Clinton did it.  Get it?

Hillary and Her Vaginal Secretions (including Jamie Lee Curtis) reTweeted and normalized Kristol.

In an earlier time, they would have been paraded through the streets and then put in the stocks or endured a public hanging.  In our more 'civilized' times, they're allowed to parade around and prepare to do more damage.  Someone should be mounting a trial for all these War Criminals and their enablers.

She had her time as Secretary of State to try to improve things.  She didn't.  The laughable Clinton Foundation did nothing to help either.

Had she not been running for president, she never would have even offered the weak it was a "mistake" to vote for the Iraq War.

"SHOULD THIS MARRIAGE BE SAVED?" went up here in November 2004.

The whole point was you can't fix what you broke and when you broke it people just want you to leave.

This is as though you burned up someone's kitchen at a party and you're refusing to leave their home at three in the morning while you insist you will fix it.

They don't want to hear it, they just want you to go.

And the US government wants to continue to pretend that it's doing some good.


Deputy Secretary of State John J. Sullivan led the U.S. delegation at today’s U.S-Iraq Higher Coordinating Committee, to affirm our commitment to building a broad, long-term partnership with the Iraqi people based on the principles of cooperation, sovereignty, and mutual respect. 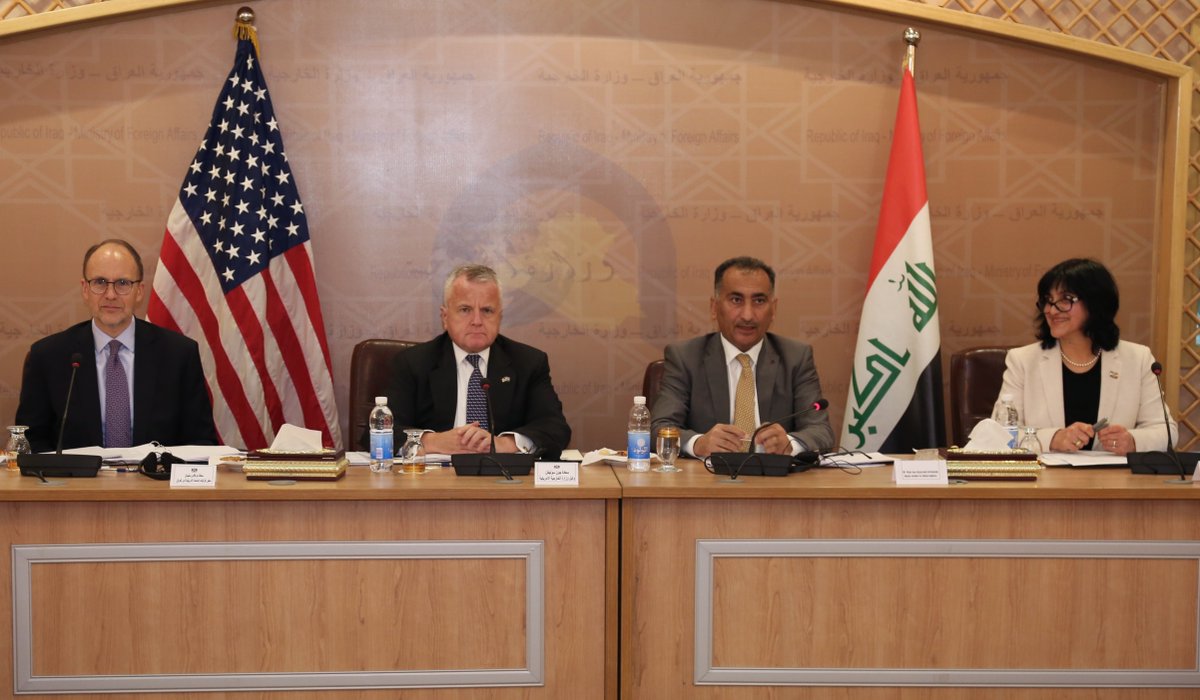 Deputy Secretary Sullivan met with Speaker of the Council of Representatives Jabouri to discuss upcoming elections and our expanding bilateral partnership.  The U.S. strongly supports holding the Iraqi national elections in May in accordance with the Iraqi constitution. 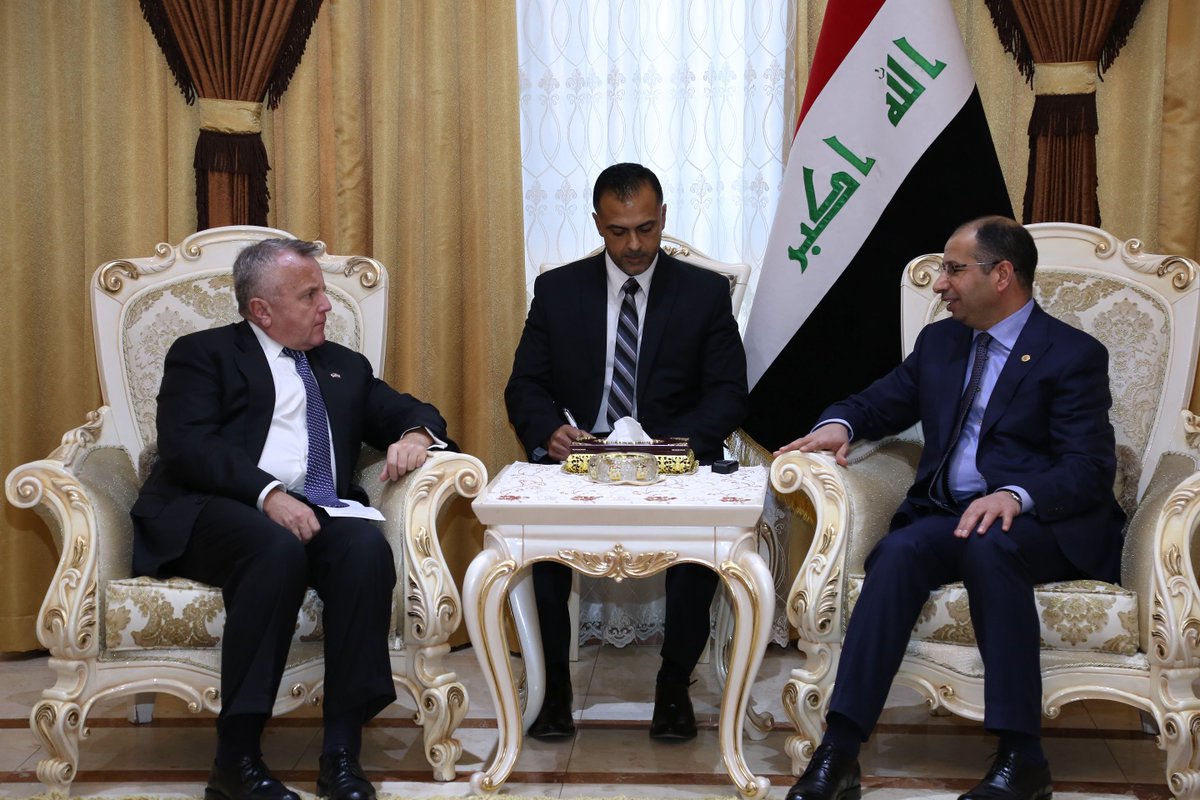 
During his meeting today with PM Abadi, Deputy Secretary Sullivan congratulated him and the Iraqi people on the bravery of the Iraqi Security Forces and their liberation of Iraqi territory from ISIS.  They also discussed future opportunities for bilateral economic cooperation.

Pleased to welcome back US Deputy Secretary of State John Sullivan to Erbil. We had a productive meeting and discussed a number of challenges facing Kurdistan and Iraq. 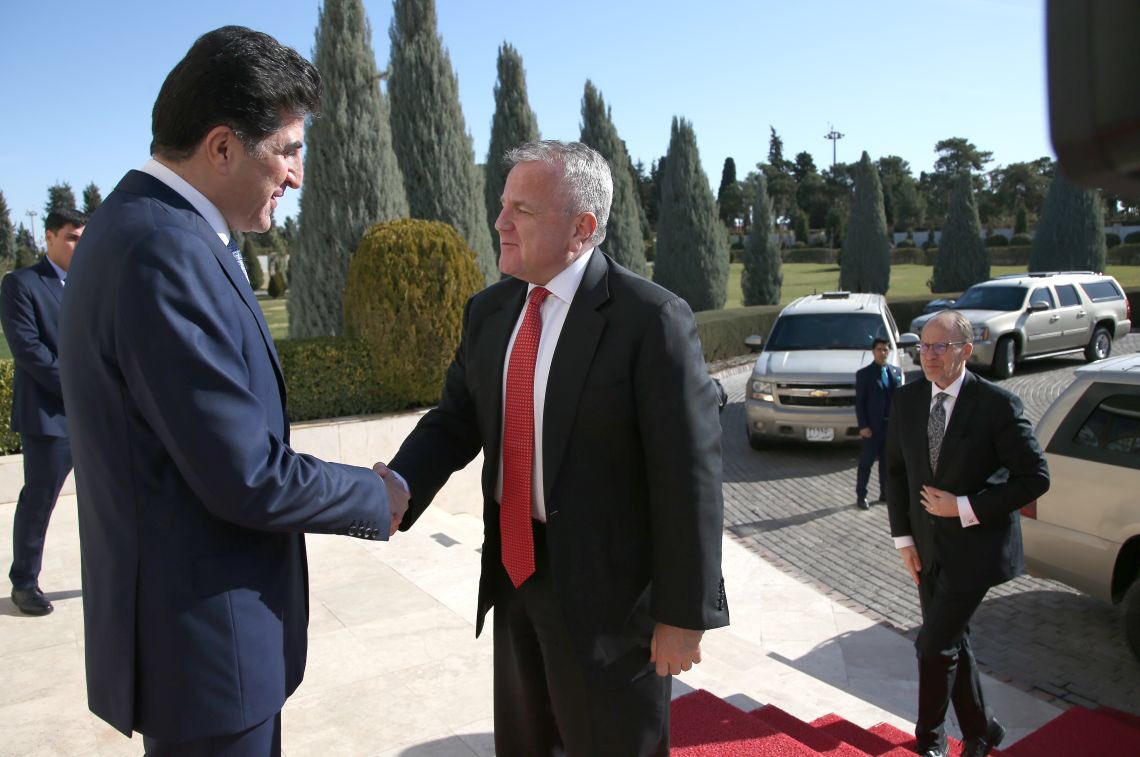 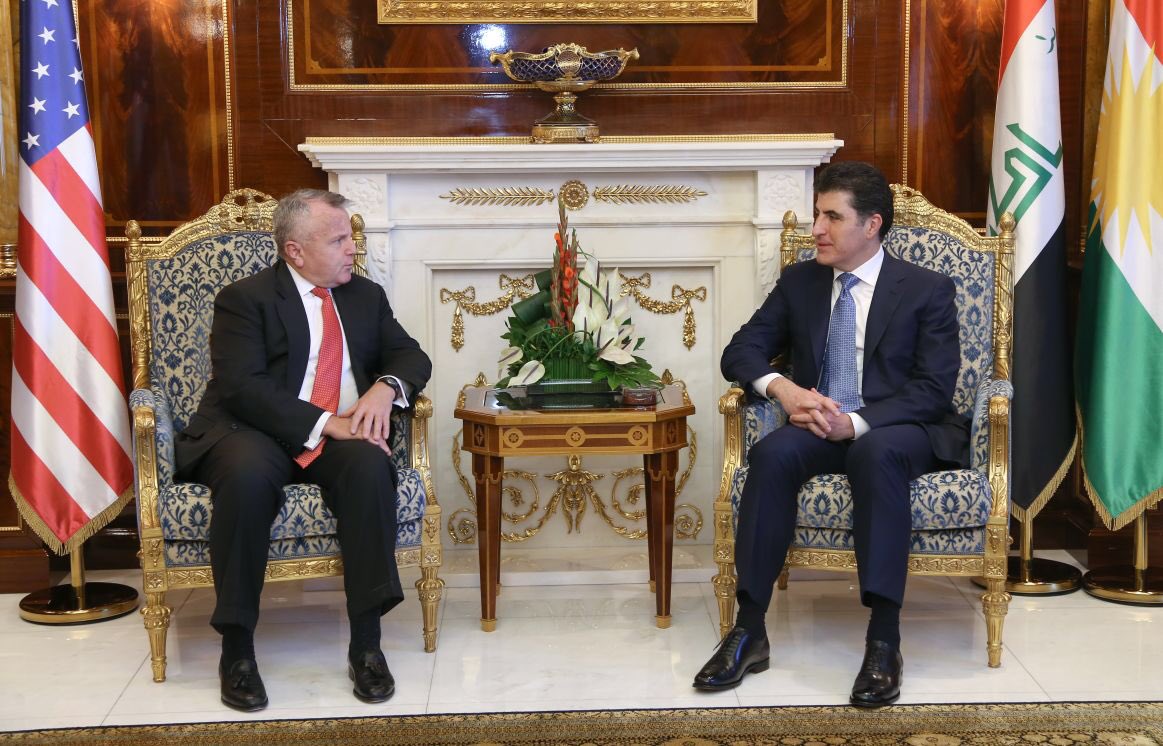 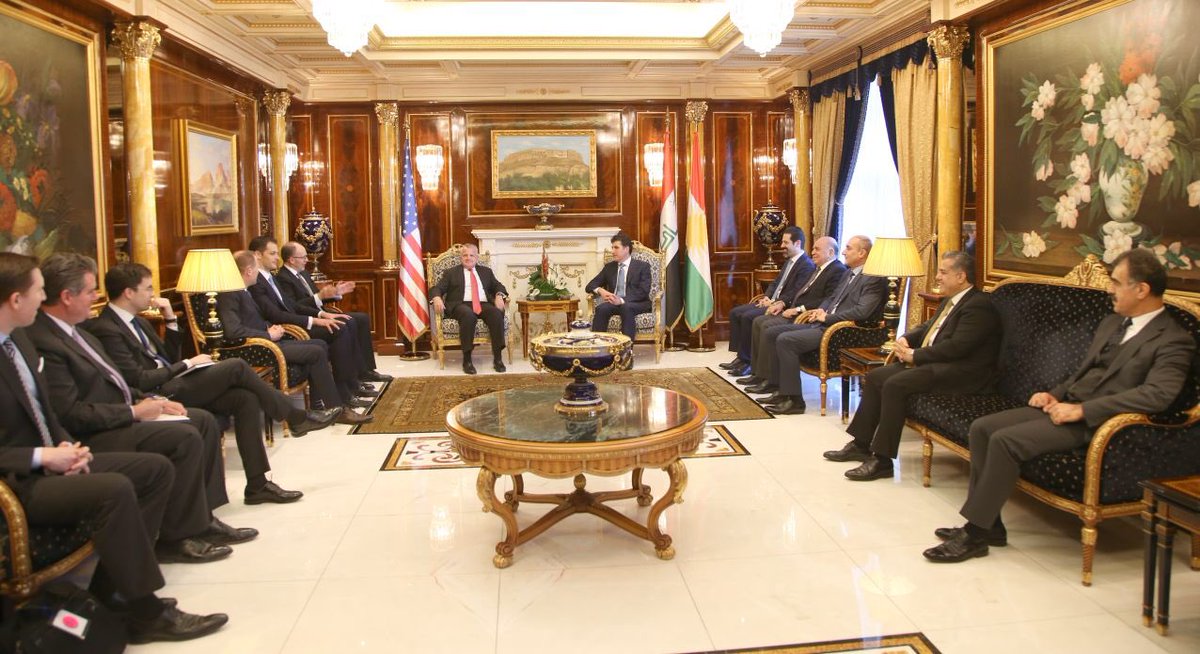 Iraq War cheerleader Michael O'Hanlon continues to cheer for it to continue.


Michael O'Hanlon: "Here we are in Iraq having largely defeated the Islamic State... now we have to help Iraq get stable so it's not as vulnerable to Iranian adventurism." fxn.ws/2ByZiAI

Almost fifteen years into this war (15th year anniversary is in March) and O'Hanlon's still preaching the US has to "help Iraq get stable."  The troops have to remain until Iraq is stable.

When will that happen?

Never since the US keeps imposing 'leaders' on the country.

The Iraqi people's voice was denied in the 2010 elections, Barack Obama overturned the results with The Erbil Agreement.  The 2014 elections were such a joke that little pretense was made that Barack installed Hayder al-Abadi as prime minister -- or did you miss the fact that months after we said that, NPR said it on air as well?  Do we need to highlight that moment from MORNING EDITION or can big boys and girls do their own Googling?

Did the US plan and create ISIS?

But I certainly understand why so many in Iraq believe that the US government created it.

The US government has done everything it could to destabilize Iraq and then use that created chaos to justify the US remaining in Iraq.

All the foreign powers have.  They're a little more subtle than, for instance, back in the days when British service members were dressing up as 'Sunni militants' (with bad wigs) and blowing up a jail but they continue to sew chaos.

And then they use that chaos to justify their own continued presence.


The United States has stopped a maintenance program for the Iraqi-owned Abrams tanks after one of the military vehicles was provided to the Iranian-backed Hashd al-Shaabi, Iraqi media reported on Sunday.


Iraq-based al-Ghad Press revealed that American company General Dynamics, who produces the Abrams tanks, had suspended its maintenance program in Iraq over the Hashd al-Shaabi’s—also known as the Popular Mobilization Forces (PMF)—possession of one of the US-made tanks.

“The US tank company [General Dynamics] withdrew from its base in Baghdad’s al-Muthanna airport after finding out that Iraq violated the terms of the contract which only authorized the Iraqi army to use the US provided tanks,” the report stated.

Very sad to hear of the passing of Bob Parry, a great investigative journalist. As Max says here, at the time of his death Parry was exposing the latest NeoCon Fake News aka ´Russiagate’- the 2017/8 equivalent of the 2002/3 Iraqi WMDs hoax.

A few weeks ago, I asked Bob Parry why he’d taken on Russiagate with such ferocity. He drew on his experience with Vietnam, exposing Iran-Contra, challenging the Iraq war. He was under heavy attack for violating the consensus, but he will be vindicated once again. I’ll miss him.
Show this thread


Isaiah's THE WORLD TODAY JUST NUTS "Hillary Speaks For Victims" and "Mira On Her High Horse" went up yesterday.  New content at THIRD: