There's a lot of great acting going on and the show moves really quick.

But Ava and C.I. are right, the character Buck really drags the show down.  It's embarrassing.

I liked everything but Buck.  He brought the show down every time he was on and he was on a lot.

Yep, some of it.  I skipped Seth's monologue because I can't stand him.

So I went in about 30 minutes after it started.  I want to see THREE BILLBOARDS but haven't yet.  So I can't comment on whether Frances deserved the win or not but I do like her as an actress.  A lot.

Best moment?  For me, it was moments: Seeing the wins for BIG LITTLE LIES -- Nicole, Alex, Laura and the show itself.  BIG LITTLE LIES is the first HBO show I've loved in probably 15 years (the last one was the first season of THE SOPRANOS).  It was fresh and different and full of life.

Applause for Kirk Douglas.  He probably raped Natalie Wood.  And he gets rolled out with his ridiculous daughter-in-law Catherine Zeta Jones and on this MeToo solidarity with survivors night, he gets people standing up and applauding for him -- not everyone though.  But enough.

In addition, what the f was up with Jones' outfit.  It was disgusting.  She knew she was coming out with Douglas in a wheel chair.  Did she not realize where his head would be?

If she'd presented alone or with someone standing close to her own height, the outfit wouldn't have come off so disgusting.

And Kirk Douglas is disgusting.  No surprise, his son's now about to face accusations from a woman.

Why were the film clips so short.

I really watch GG for the film clips.  Especially since the Oscars don't do anything like that.

I really wanted the film clips to be longer.

I got more information from the commercials.

There was a trailer for RED SPARROW.

I didn't realize it was Jennifer Lawrence until today.

That's when I looked it up -- I just remembered "RED" and that the commercial said it was coming out in March (and that it was not yet rated).

Again, I didn't realize that was Jennifer Lawrence until today when I was looking the film up.

I really want to see this.

Tuesday, January 9, 2018.  The violence continues as the war continues, the US Defense Dept spins 'progress' in Hawija but the reality is different, Oprah Winfrey is seen as the latest savior but she can't run for president and easily win with her history, and much more.


Unable or unwilling to run on popular positions (Medicare for all), they instead rush to well known names to try to win offices.  Which is how we arrive at Oprah Winfrey for president -- a notion that many are currently pushing.  A really dumb notion on the face of it.

So there goes a number of voters in the base.

But more to the point, there's video.

Oprah has no political experience.  To be a viable candidate for president, she'd need to prove that she's smart and qualified.

And then roll the clip, Oprah taken in by the lies of war.

Bad enough.  But check out that clip.

It's Oprah with Judith Miller.

And a member of Oprah's studio audience stands up and disputes the claims -- which we now know are lies -- and Oprah snaps back that this is the truth.

It wasn't the truth.

She's never held public office and she got the biggest decision of this century wrong.  And when an audience member tried to help her out, she refused to listen.

Was that her drug of choice?

But she was on drugs and she has a personal narrative, "Look how rich I became!"  She just doesn't have a heroic narrative, "And I helped others by . . ."

No one believes she's straight at this point.  She could run as an openly gay woman and could win.  But that joined-at-the-hip with Gail is not going to play if Oprah's going to continue to insist that they're just friends.

Can she be trusted?

Iraq questions whether she's fit for public office -- especially since she was still doing her show when the war went to hell and, strangely?, she never did an update -- hours and hours, weeks and weeks, years and years of shows and she never did a mea culpa.

That was his name right?

She had a writer on her show who made up his nonfiction book.

That doesn't show that she can be trusted or that she makes wise decisions.

She's enriched her own pockets but what has she done for others?

If you're as filthy rich as Oprah, that's an issue.

And what the American voters will see is that she built a school in another country . . . but did nothing for America's children.

This is someone who can successfully run for president?

"B-b-b-but she gave that (meandering) speech and said a lot of things -- she's a defender of women against the likes of Harvey Weinstein!"

You mean this Harvey Weinstein?


#Oprah and #HarveyWeinstein over the years. 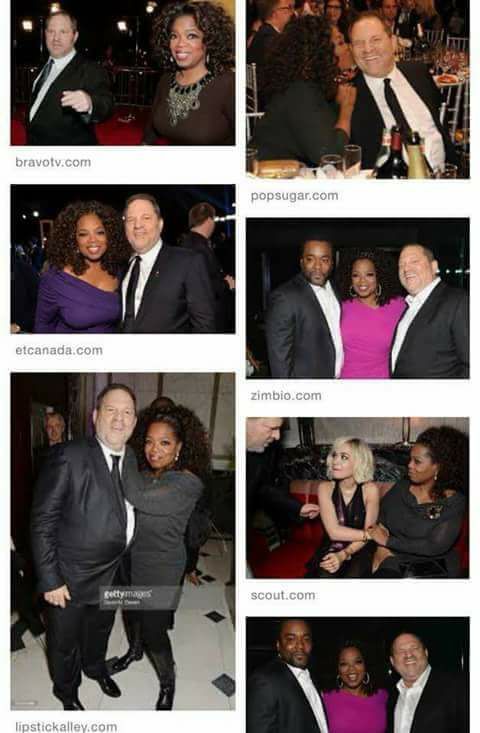 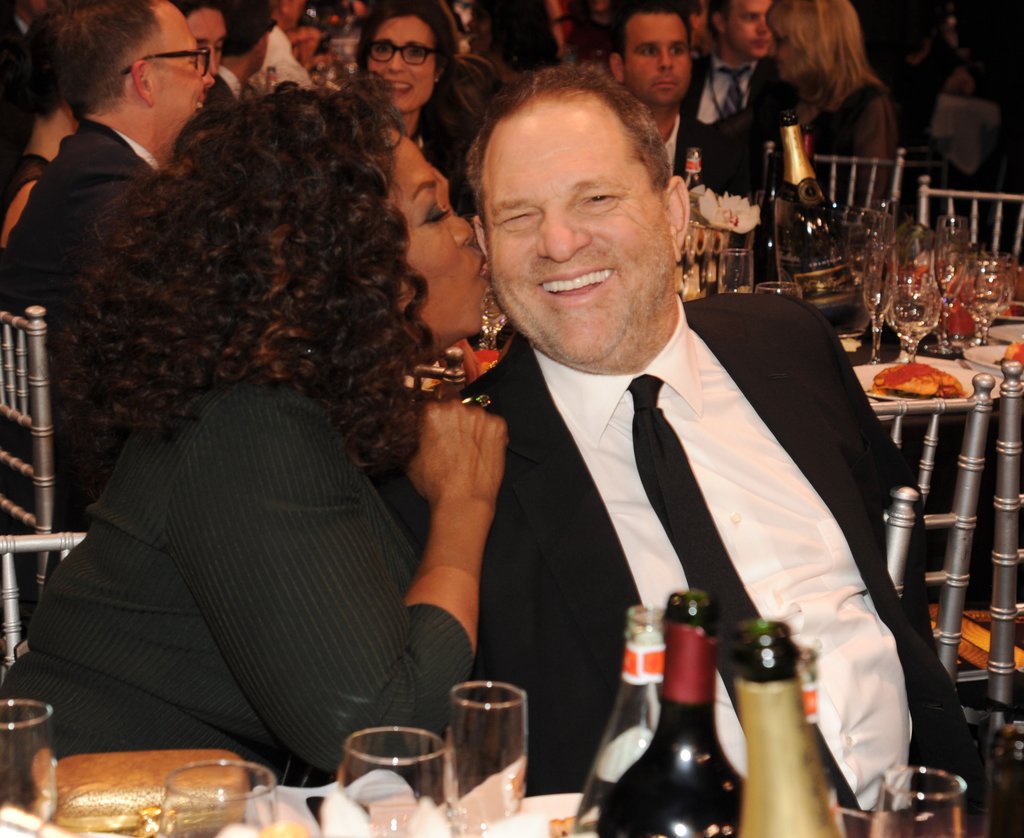 
What did Oprah say about Harvey Weinstein?  When did her voice speak out against him?

I believe it was Sunday at the Golden Globes.

Don't believe she had anything to say until then.

So for months, she stayed silent about serial abuser and rapist Weinstein.  But, hey, isn't it great to see them cuddle in the photos above?

CNN and NBC are among the worst pimping the Oprah for president nonsense.

The only thing good about it is that new candidates need to be considered -- go away, Hillary -- and this helps that conversation.

But the notion that Oprah can win the presidency?

That would not be a glide to victory, it would be one of the hardest battles for the reasons above as well as many others.  (Not remembered now but Oprah was notorious in the 90s for pissing off single mothers with her comments.  Single mothers make up for a lot of voters.)


She sold the Iraq War.

I would argue that's enough reason for her not to run.

But if we're honest, that's the best reason for her to run.

Joe Lieberman, John Kerry, John Edwards, Joe Biden -- every Democratic presidential ticket since 2000 has had at least one person on it who would go on to support or did support the Iraq War.

It's all fun and games for some -- especially those who supported the Iraq War.

But their support had consequences.

Around the world, many people are dead as a result of the Iraq War.

The ongoing war hits the 15 year mark in two months.

It is no minor event.  And supporting that war was a craven and shameful position.

The National‏Verified account @ScotNational 17h17 hours ago
In tomorrow's National ... Cat Boyd @kittycatboyd on why we must teach our young people the lessons of the Iraq War 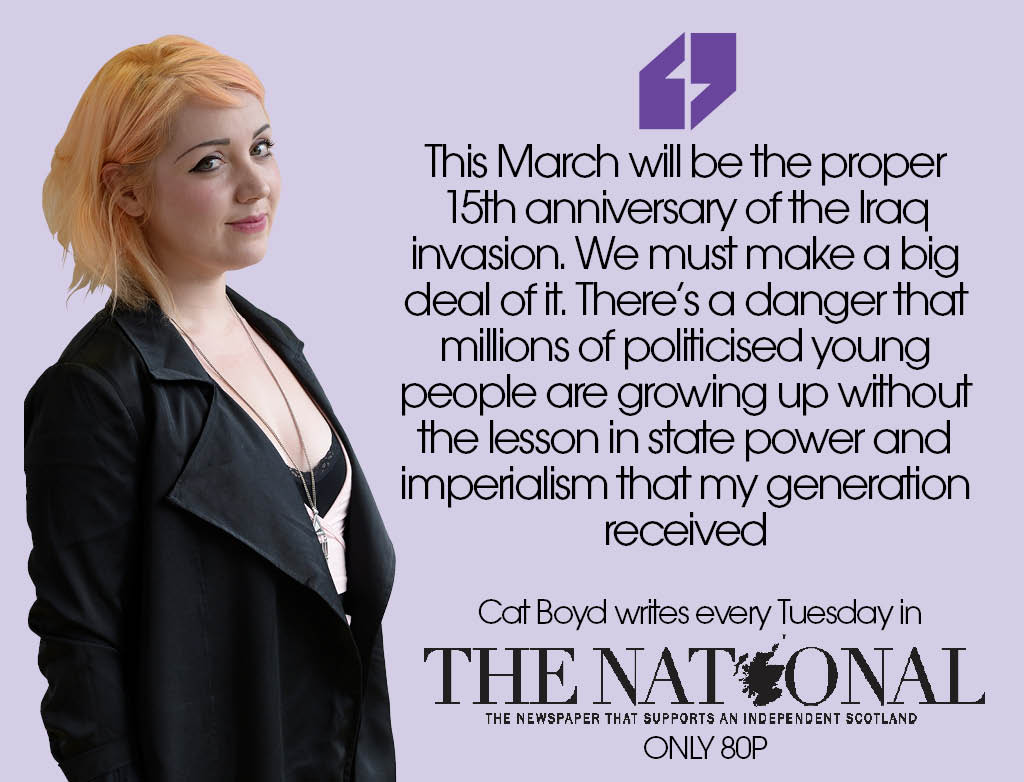 The image of Oprah, not the reality, would be a person making a statement similar to Cat Boyd.  But she can't do that because she supported the Iraq War and used her program to sell the war.


Her support will come from human trash like the neocons who lied and promoted the war.  Did someone say Bill Kristol?

Sadly, he's not joking -- nor is he known for having a sense of humor.  But the neo-cons will line up with Oprah.  She sells war.

This reality is being ignored but lazy trash ignores a lot.

Trash includes Khary Pene of the DNC.  He does a threat that's full of lies.  Barack didn't attack Hillary after he lost to her in New Hampshire!  Uh, he did too.  He used his surrogates to mock her.  Jesse Jackson Jr. was the most infamous.  So Khary's nothing but a lying piece of trash.  But if you doubt that, as part of his glorification of War Hawk Barack, he offers 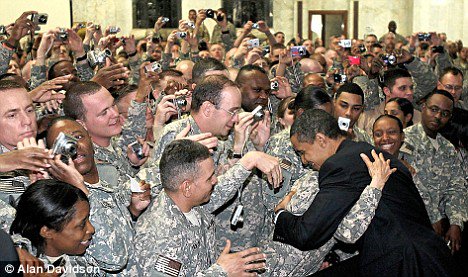 
The Iraq War is not ended.  US troops remain in Iraq.

He had eight years but he left office with US troops still in Iraq.

How do you not know that?

Khary doesn't give a damn about the Iraq War which is why he can Tweet that nonsense promise by Barack without even grasping what a lie it became.


Turning to an issue we've been noting a lot in the last few weeks, the plight of Palestinians in Iraq.  Adnan Abu Amer (AL-MONITOR) covers the efforts to strip Palestinians of their rights:

The Arabi21 news website revealed Dec. 20 that Iraqi President Fuad Masum had approved Law No. 76 of 2017, which stripped Palestinian refugees living in Iraq of their rights and classified them as foreigners. The law came into effect after being published in the Iraqi Gazette.
The new law replaced Law No. 202 of 2001, issued by former President Saddam Hussein, forcing the Iraqi state to treat Palestinians as equals to Iraqis, with all privileges and citizenship rights, such as tax exemption, opportunities to work in government departments, and access to education and health care services.
Mohammed Mshenesh, a Palestinian researcher on refugee affairs, told Al-Monitor, “The most important issue with the new law is that it replaces the previous one that stipulated treating Palestinians as Iraqis. This is why Palestinians are worried about the future of those in Iraq who were already marginalized regardless of the law protecting them, which has now been quashed.”
Mshenesh added, “The new law will deprive Palestinian engineers, doctors and teachers the ability to become members of Iraqi trade unions," thus preventing them from practicing these professions, "and whoever wants to start a commercial project will have to comply with the foreigners law, which requires the presence of an Iraqi sponsor and the approval of the Ministry of Labor and Social Affairs and the Ministry of Interior. This will increase the Palestinians’ suffering and push the few left to leave Iraq.”


One of the great lies about the Iraq War was that it was about 'democracy' and 'liberation.'

The only ones liberated were Shi'ite cowards who rushed to return to Iraq after the US invaded in 2003.

They suffered huge losses.  The Palestinians did as well.

The only lives improved were the lives of those cowards who fled Iraq and then spent decades agitating for war -- for others to fight the battles of the cowards for them.

Let's go to the US Defense Dept and see if you can spot the lie in the claims of 'progress' issued yesterday:

It's progress if you lie.

If you tell the truth, not so much.

Military operations targeting suspected Islamic State militants in a district of Iraq's Kirkuk have displaced almost 700 people since Thursday, said a UN spokesman said Monday.
Those displaced by the fighting in Hawija district are being transported to nearby Daquq displacement camp, where humanitarians are providing assistance, Stephane Dujarric quoted the UN Office for the Coordination of Humanitarian Affairs as reporting.
Humanitarian activities in Hawija have been paused for security reasons and will resume once military operations in the area conclude in the coming days, said the spokesman.


Hawija's an example of progress the Defense Dept insists!

But, reality, humanitarian efforts have currently ceased and another 700 citizens have been rendered homeless.

If you're a US reporter it must be because you're never going to question it judging by the universal silence from one media outlet after another.


And it was REUTERS, a non-US press agency, who reported earlier this week about refugees being forced to return to Anbar Province despite security risks: