Do you remember the opening of SAVING PRIVATE RYAN?

For 20 minutes, that's an amazing movie.

And it floundered like crazy, it was like a fish left on the pier, just flopping around.

Mainly due to cinematography and strong editing, it holds your attention like the first 20 minutes of SAVING PRIVATE RYAN.  It never leaves you yawning like the rest of that film.

But it could have used a coherent script.

It also could have used better casting.  Rory Cochrane is really good and he's easily distinguishable but he's one of the few in the supporting cast who is.  And when the script is so bad, you really need actors who stand out to know who's who.

Christian Bale is great and he's the real selling point for the film.

If it were released later in the year, HOSTILES could result in an Academy Award for Christian but, as it is, he'll probably be forgotten by the end of the year unless this is a major box office hit.

Should you see it?

It's going to hold your attention because of the visuals and the pacing -- and Bale's lead performance.

But don't try to figure out the script until after the film when you and your friends can argue over which supporting character was which.

Friday, January 26, 2018.  Turkey's ready to ramp up war with Iraq, no one's clear what Secretary of State Rex Tiller said to them or promised to them, Iraqi elections remain a muddle of confusion, and much more.

Good points raised on Twitter.  Let's start with Jimmy Dore who I agree with:

Jimmy Dore Retweeted Chris Hayes
By "Cranks" do u mean the same people that exposed the Iraq WMD's lie like NSA Whistleblower William Binney & @raymcgovern or Veterans Intelligence Professionals For Peace, while all your friends pushed for Iraq war on MSNBC? #McResistance Whatever happened to #PhilDonohue
Jimmy Dore added,

Chris HayesVerified account @chrislhayes
Aside from genuine cranks, is there anyone left denying it was the Russians that committed criminal sabotage in the American election? volkskrant.nl/4561895
51 replies267 retweets591 likes

Again, I agree with him.  But it's not something I think about a great deal because MSNBC's a joke to me.  But reading the Tweet, it's not just that Donahue was run off from MSNBC (ahead of the start of the Iraq War), it's that in all the time since, they've only once given a show to someone who publicly questioned the war before it started: Alec Baldwin.

Has a single prominent politician or pundit ever apologized for advocating for an Iraq War that was waged on false WMD pretenses and that killed hundreds of thousands of people? Or did most of them just smile at the camera and get re-hired for their jobs?
107 replies853 retweets2,348 likes


I think it's just John Edwards who penned a column for THE WASHINGTON POST when he was preparing for his run for the Democratic Party's presidential nomination.

Hillary Clinton certainly didn't talk about false pretenses or the death of people.  She said it was a mistake, her vote was a mistake.  And then it evolved into, it was a mistake to trust Bully Boy Bush to do the war right.

But that's craven Hillary for you.

In terms of pundits, MOTHER JONES has certainly found employment for a lot of Iraq War supporters including Kevin Drum but then the promotion of  Monika Bauerlein and Clara Jeffery meant the death of that magazine.

I have not changed my opinion of #GeorgeWBush. He killed one million people in Iraq. I can’t forget about that.
12 replies98 retweets240 likes


Those are sentiments that would never be expressed by MOTHER JONES today.  They're so watered down they need adult diapers.

This week BLACK AGENDA RADIO shared a speech by Margaret Kimberley discussing the permanent war and the lack of resistance to war from the so-called 'Resistance.'


Iraqi authorities on Thursday took into custody a former trade minister convicted in absentia for corruption cases, following his extradition from Lebanon, Iraq’s corruption watchdog said in a statement.


Yes, that is the story we covered yesterday morning -- before REUTERS.

We didn't have to wait for 'authorities' to issue 'a statement.'

Don't know when that became necessary to report on something.

They also fail to note that this ex-Minister of Trade September apprehension is unusual in that he's only released to Iraq in time for Hayder al-Abadi to use it as election propaganda.


They re-wrote a government release.

Somehow that passed for reporting.

They didn't even get his history correct.

At least they can say they covered it.  That's more than any other western outlet has done.


Mina Aldroubi (THE NATIONAL) does a better job covering the story.


In terms of analyzing the planned elections in May (they're supposed to take place in May), NIQASH remains one of the few outlets offering analysis.  Mustafa Habib notes today:

The Abbas Brigades are one of the militias that made an official announcement saying they would not be competing in the upcoming Iraqi general elections, still slated for May 12. The brigade’s main founder, the highest Shiite Muslim cleric in the country, Ali al-Sistani, refuses to participate in politics.
However there are still more than 20 different militias, that started off as volunteer forces to fight the Islamic State, or IS, group, but which are now an official part of the Iraqi security forces, who have decided to compete in the elections, in one form or another.
It is fair to say that these elections will be the most important in Iraq since 2003 and will determine the country’s path in this new era, after the security crisis caused by the Islamic State group.
Iraqi law bans military groups from participating in elections, saying that political parties should not take a military or semi-military form and should not be affiliated with any armed forces. The leaders of formerly-volunteer militias have been allowed to form political entities because they said that their fighters were now at the disposal of the Iraqi government. In reality though, the fighters are still taking orders from their leaders. There are also still dozens of offices that represent the militias in every Iraqi city and town and they appear to act independently – one Iraqi MP, Hakim al-Zamili, head of the parliamentary defence and security committee in parliament, has said the offices should be closed.
The militias are now a legitimate part of Iraq’s security forces, Abbas al-Bayati, a Turkmen MP and member of the parliamentary committee on foreign relations, who is close to Iraqi Prime Minister Haider al-Abadi, told NIQASH. “It is the third force after the army and the police,” he said. “We don’t accept attacks on this force. But we do acknowledge that it needs to be organized, and to be distanced from political activities, according to Iraqi law.”


A law was passed that was supposed to deal with the future and the place of the militias in Iraq but important details around the implementation of the law were not spelled out. Some other politicians have demanded that the law be amended to deal with these gaps.


News out of Iraq today includes by the Turkish government pounding war drums. 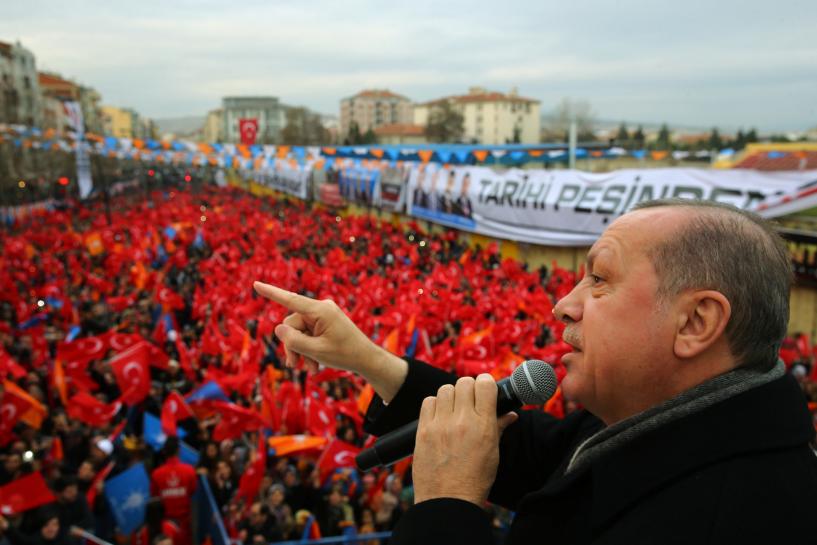 
Turkey is prepared to take its fight against Kurdish forces in northern Syria as far east as Iraq, President Recep Tayyip Erdogan has said.
Speaking in Ankara, Mr Erdogan reiterated that his forces will move against Kurdish-controlled Manbij, which risks confrontation with the US.
US troops are based in the city, which was taken from the Islamic State group (IS) by Kurdish-led forces in 2016.

More danger for US troops who shouldn't even be in Iraq today.  Will the government ever end the Iraq War?


QUESTION: Can I have a quick one on Turkey about yesterday’s phone call between President Trump and Erdogan?
MS NAUERT: Yeah, yeah. Yeah, sure.
QUESTION: It seems that the Turks are telling – claiming there is a mischaracterization of the content of the call in the White House readout. What do you make of this claim from Turkey?
MS NAUERT: I think our – the call readout that was provided by the White House was very specific, it was very detailed, and it was firm. And I think it expressed both the President and the Secretary’s extreme concern about the situation in northwestern Syria, in the Afrin area. So I think they were clear about that. I think the President and the Secretary – as the Secretary has in recent calls with the foreign minister of Turkey – been very clear that we want a de-escalation of tensions. This is a part of Syria that had been relatively stable. Again, it’s Syria, but it had been relatively stable. And now we’re seeing something altogether different happen. We recognize and respect Turkey’s legitimate security concerns, their concerns about the PKK. Turkey is a NATO partner and ally, so we understand and respect that, but I want to make something clear, that we don’t have a U.S. presence in Afrin. Our U.S. presence is elsewhere. It’s more in the eastern part of the country, where we’ve been fighting – where we have been fighting ISIS. So we’re not a part of that. We work with the Syrian Democratic Forces in the eastern part of that country to fight ISIS. We continue to do that, so – and we encourage the Turks and everybody else to put the focus on ISIS and not other groups.
QUESTION: Heather, the Turkish foreign minister and other Turkish officials said publicly that Tillerson proposed this idea for a 30-kilometer buffer zone. Tillerson said, “I didn’t propose anything.” The Turks have come back and said no, really, you did. Do you have any clarity on – I mean, did they discuss it but it wasn’t a formal proposal, or – can you, like, parse that for us?
MS NAUERT: Yeah, and we put out some comments on this yesterday, and I want to talk a little bit about some of what the Secretary said. And he talked to I believe one of the pool reporters today when he landed in Davos. He said, “We discussed a number of possible options, but we didn’t propose anything.” So back to the readout for a second that was provided, we stand by the readout. We stand by the President’s assertion of cautioning Turkey about the escalation of tensions in the Afrin area, and then the Secretary I think has also been clear by saying, look, we discussed a range of options with the Turks.
QUESTION: Was the 30-mile or kilometer buffer zone one of them?
MS NAUERT: I don’t have that level of specificity that I can provide to you, but I think there was no formal proposal of anything. I think the Secretary was talking with Turkey – NATO ally – about hey, what do you all need, just as though he would talk to the Kurds, because he was speaking with Barzani today. So he’s talking with both sides about what they would all need.
QUESTION: The Turks are talking – you were saying that you’re not involved in Afrin, but they’re talking about moving on to Manbij, which – where there is a U.S. military base. Has the Secretary kind of drawn any red lines about where they can go?
MS NAUERT: We have been clear with the Turks.
QUESTION: Have we relocated any U.S. personnel out of Manbij to make sure they don’t get bombed by the Turks?
MS NAUERT: State Department personnel?
QUESTION: Or U.S.


MS NAUERT: I – yeah, I can’t comment on any DOD personnel because I just wouldn’t have that level of knowledge, but I’m not aware of any State Department personnel who’ve been moved.